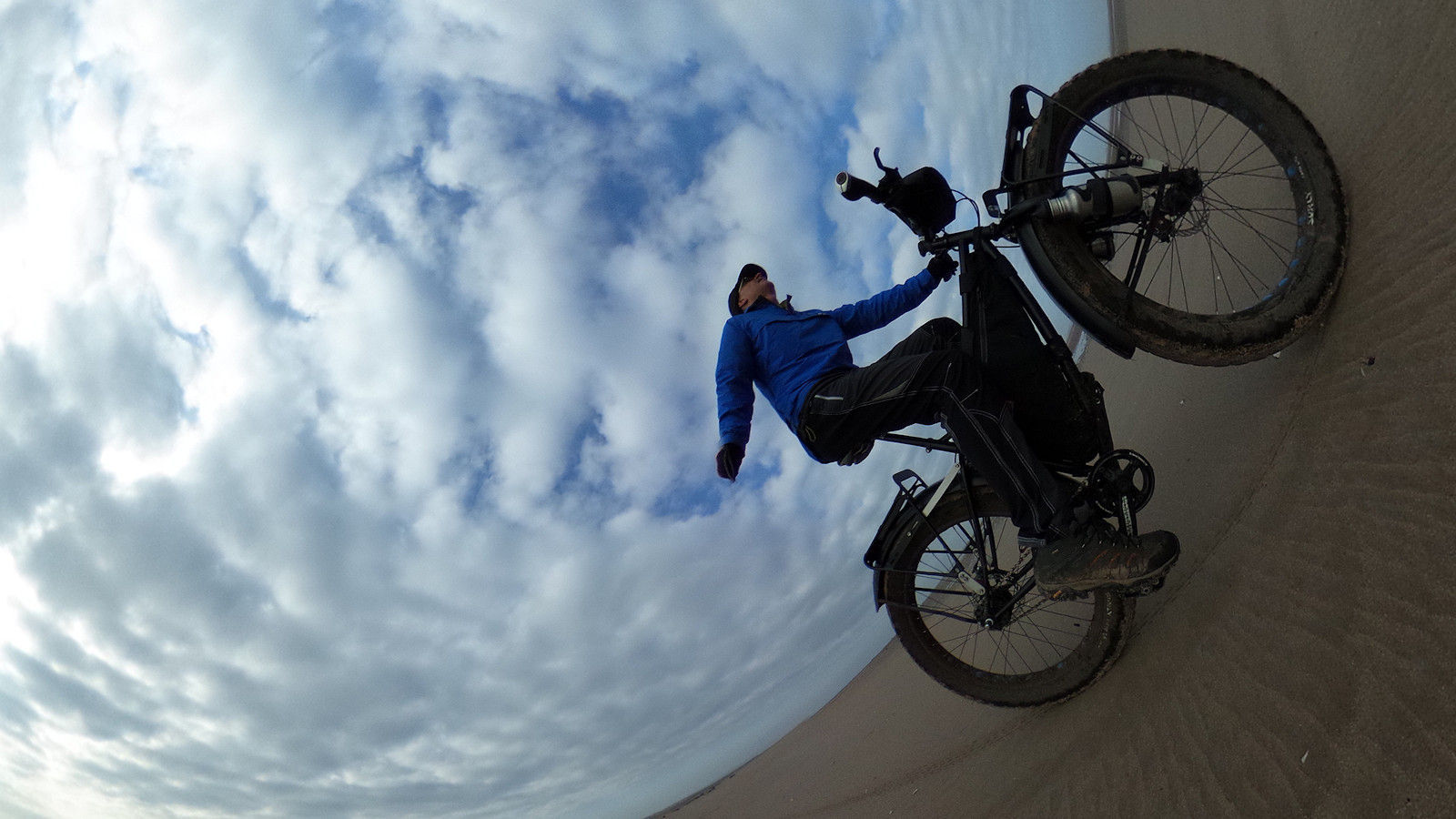 As I write this page, I’ve been riding the Surly Pugsley on a number of beaches in the local area and also further afield. Mostly on the beaches of East Lothian but also as far down the coast as Lindisfarne, also known as Holy island, for more than 10 years now and want to share a few facts I’ve discovered about riding on sand.

First of all, there are lots of different “textures” of sand, from the loose dry wind-blown stuff found in the dunes – usually tough to ride on unless wet after rain – to the delightful bliss of wave compacted sands found between the lower and upper tidal limits. And, of course, it’s not always easy to spot the difference. Many a time I’ve been bombing along in 6th gear only to suddenly hit a patch of the soft stuff, rapidly coming to an almost standstill within a couple of pedal turns and having to quickly shift down to 2nd or even 1st gear to maintain momentum.

At this point I want to offer the best advice you can get for beach riding with a fat bike and that is to reduce your tyre pressure are low as you can. When I first started out I was running my tyres around 15 psi which is way too high for sand. It was only when I following some sage advice from Coast Kid a.k.a. Bruce Mathieson, that I realised that low was far better. I now run my Pugsley around 8 psi front and rear. It makes all the difference.

The best advice I can give is that only experience will help you in find a good hard riding surface on the beach. The appearance of one patch of sand is often much like that of any other but some are good and some are bad. Even the same patch of sand may vary in its compactness. I’m not all that certain why, but the state of the tide might have something to do with it. The weather also has a say in matters, particularly wind direction and strength. A recent ride from Aberlady to North Berwick after a spell of rain, found the going considerable harder than usual. This, I suspect down to the rain loosening the normally well-compacted sand I had previously ridden across.

Most of my beach rides are on sand but the Lothian coast has its fair share of the hard stuff as well including shingle, pebbles, rocks, boulders and naked rock. Personally, I find it difficult to ride anything larger than pebbles but perhaps I just need to be a bit more confident and have a go. I must admit that I hate to crash my pedals onto rocks and usually walk the more difficult areas.

Sand and rocks are not the only things that make up beaches and all manner of stuff can be encountered. The most noticeable tends to be debris washed up along the high tide line, usually timber and plastic. These areas can be ridden across but care should be exercised as timber can contain nails and loose brush can catch in wheels and chains. Broken bottles and glass are not unheard off as well.

Now slightly off the beach and onto the subject of dune paths. Most of the time I try and keep to the sandy parts of the beach but on occasion coastal rocks, even cliffs, means having to find inland routes. Most, if not all, the dunes along the Lothian coast, have a maze of footpaths and larger trails and the going under wheel can vary between hard-packed sandy soil, loose dry sand and grass. Often a mixture of all three. Riding is usually possible but can be hard going at times.

One of the biggest issues I’ve found is catching the pedals on the sides of narrow paths, usually in dune areas. Sometimes I’ve been able to raise or lower pedals as I ride accordingly but more often than not I have to dismount. It would not be the first time I’ve caught a pedal and come to an abrupt stand-still. Luckily no damage to Pugsley or certain parts of my anatomy – all males will know what I refer to!

Beach riding is what the Surly Pugsley was made for, well, it was actually for snow, but that’s doesn’t really matter. On the plus side, beaches are available all year round here in Scotland but snow is infrequent and does not always last very long, at least in the lowlands. So, get out there and enjoy yourself.