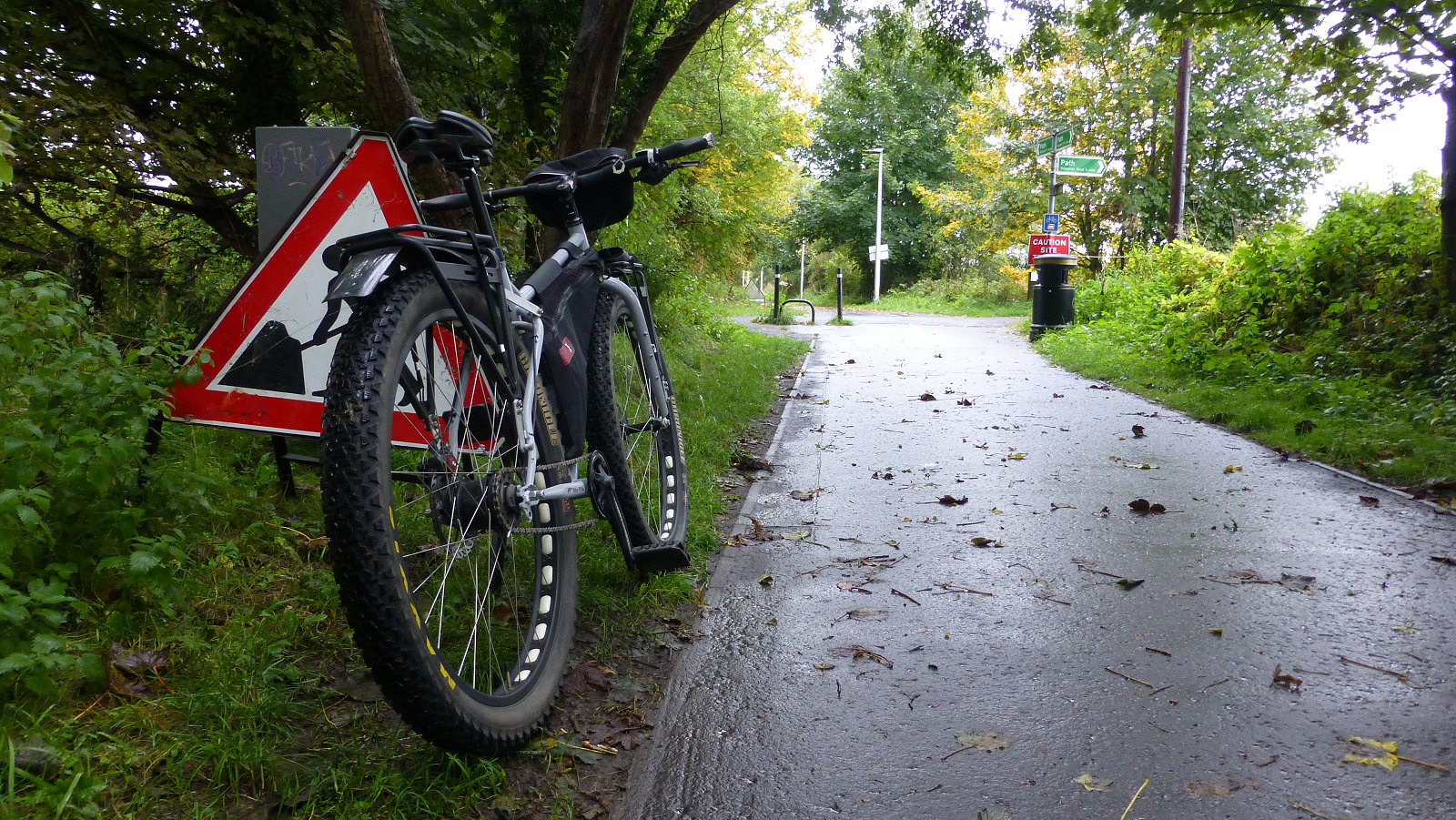 With over 18 hours of constant heavy rain the previous day, my planned 13 mile route today starting from home and taking in the villages of Rosewell, Roslin, Loanhead, Shawfair and back home was not ideal for the kick scooter, so the Swifty’s were given the Sunday off and my Surly Krampug was used to brave the damp conditions for todays ride. It would be interesting to compare the differences between kick scooting the route and cycling the same route.

The weather was overcast, with light drizzle when I set off from the house, riding footpaths across the housing estate to join the Dalkeith to Penicuik Cycleway. The climb from Bonnyrigg up to Rosewell, is long but gentle, and no headwind today was a bonus, otherwise it can be real painfully slow slog. 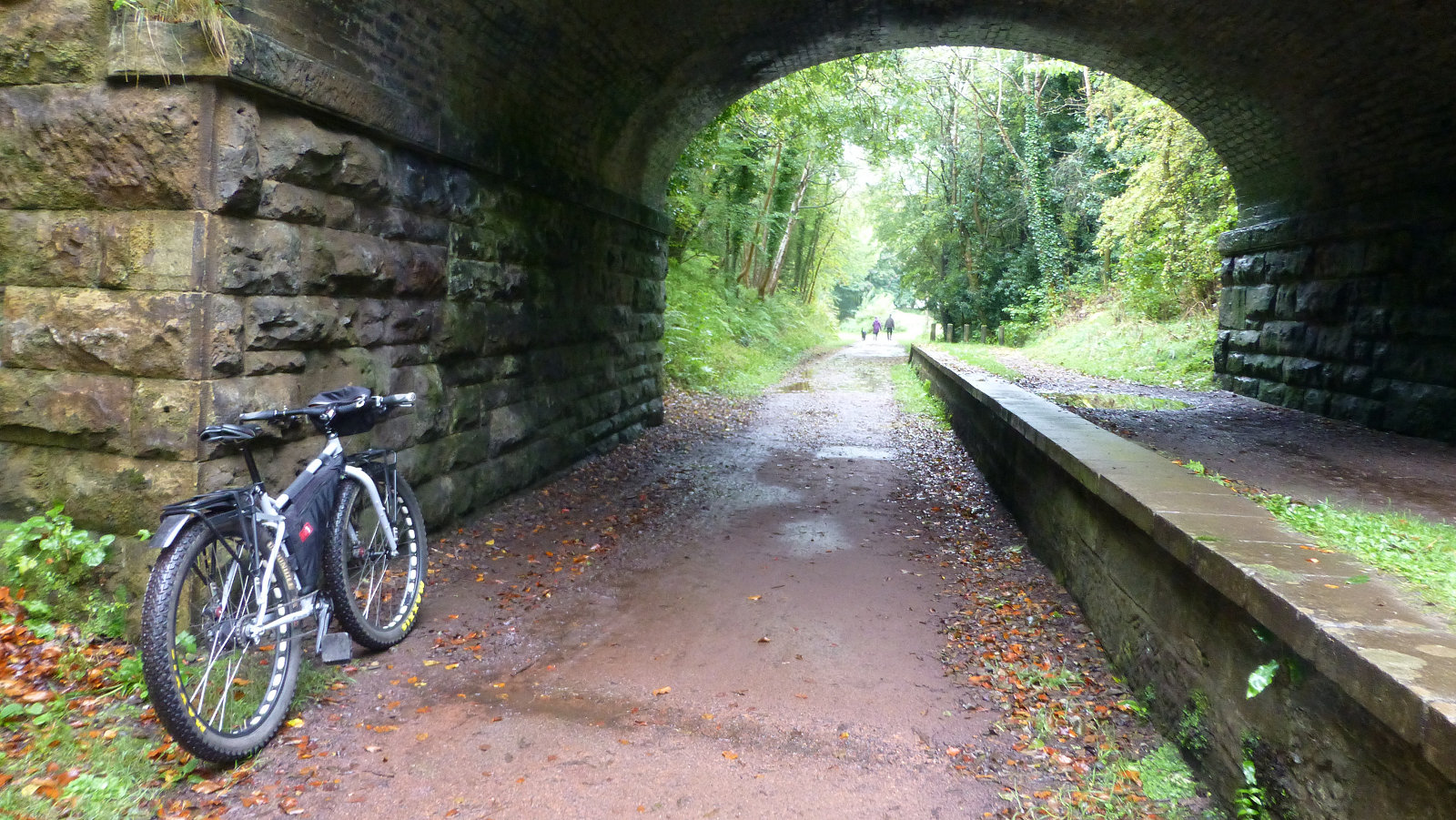 At Rosewell, note that’s Rosewell, not Roswell, where the famous UFO crash was alleged to have occured, the fine smooth tarmac changes to compacted gravel with frequent large puddles and streams of water running off the surrounding farmland. It can be tempting to blast through these streams and puddles but I find its much better to slow down, generating less spray and therefor getting less wet as well. I guess that’s what happens when you get older, I know what I would have done when I was a lad, much to my parents dismay. 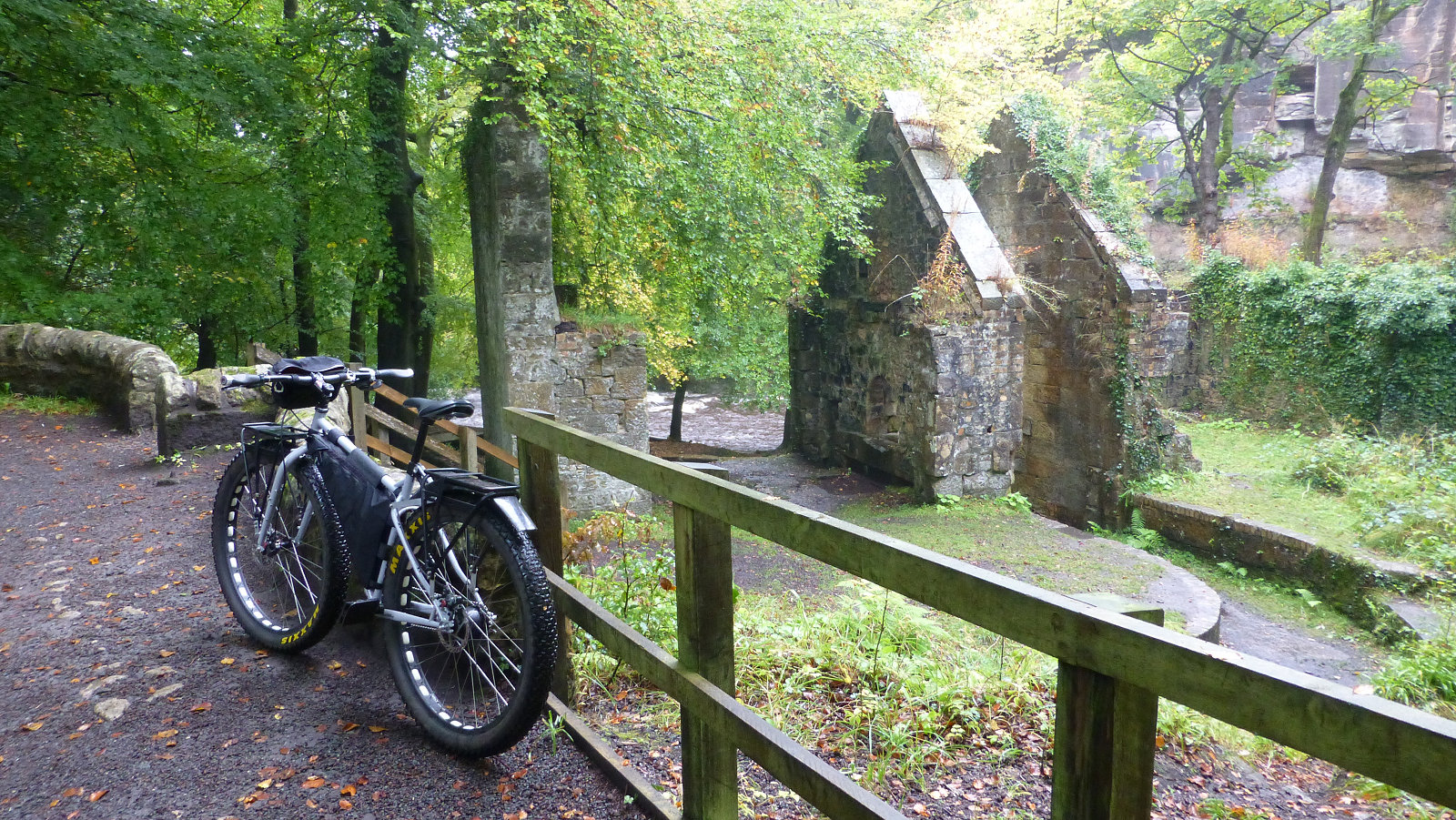 A signposted exit for Roslin Gunpowder Mill, had me leaving the cycleway and bumping the bike down a series of steps, before crossing the River North Esk, which was running deep and fast after yesterdays heavy rains. The ruins of the gunpowder mills are well worth a visit and the gorge where it sits is quite spectacular. A keen eye will spot fossil tree ferns in the gravels of the river bed, if you are lucky. 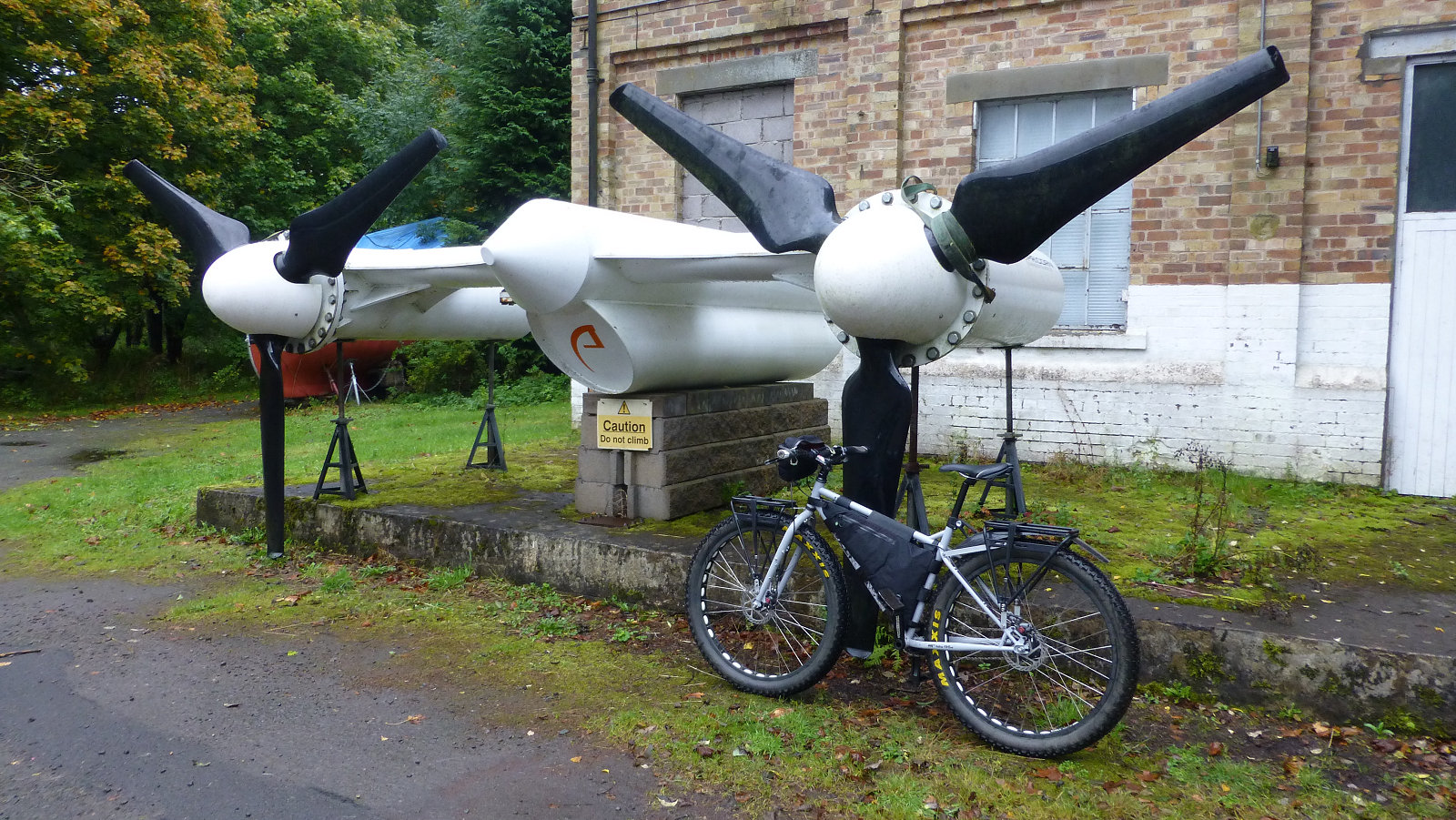 After a short road section, I dropped into the parking area at Roslin Glen, following a dirt trail beside the river, before hauling the bike, and I must admit with some difficulty, up some very narrow steps to cross the river again, then heading up hill to the entrance road to Roslin Castle, itself also worth a quick look-see. Though do bear in mind it’s not open to the public and people live there. 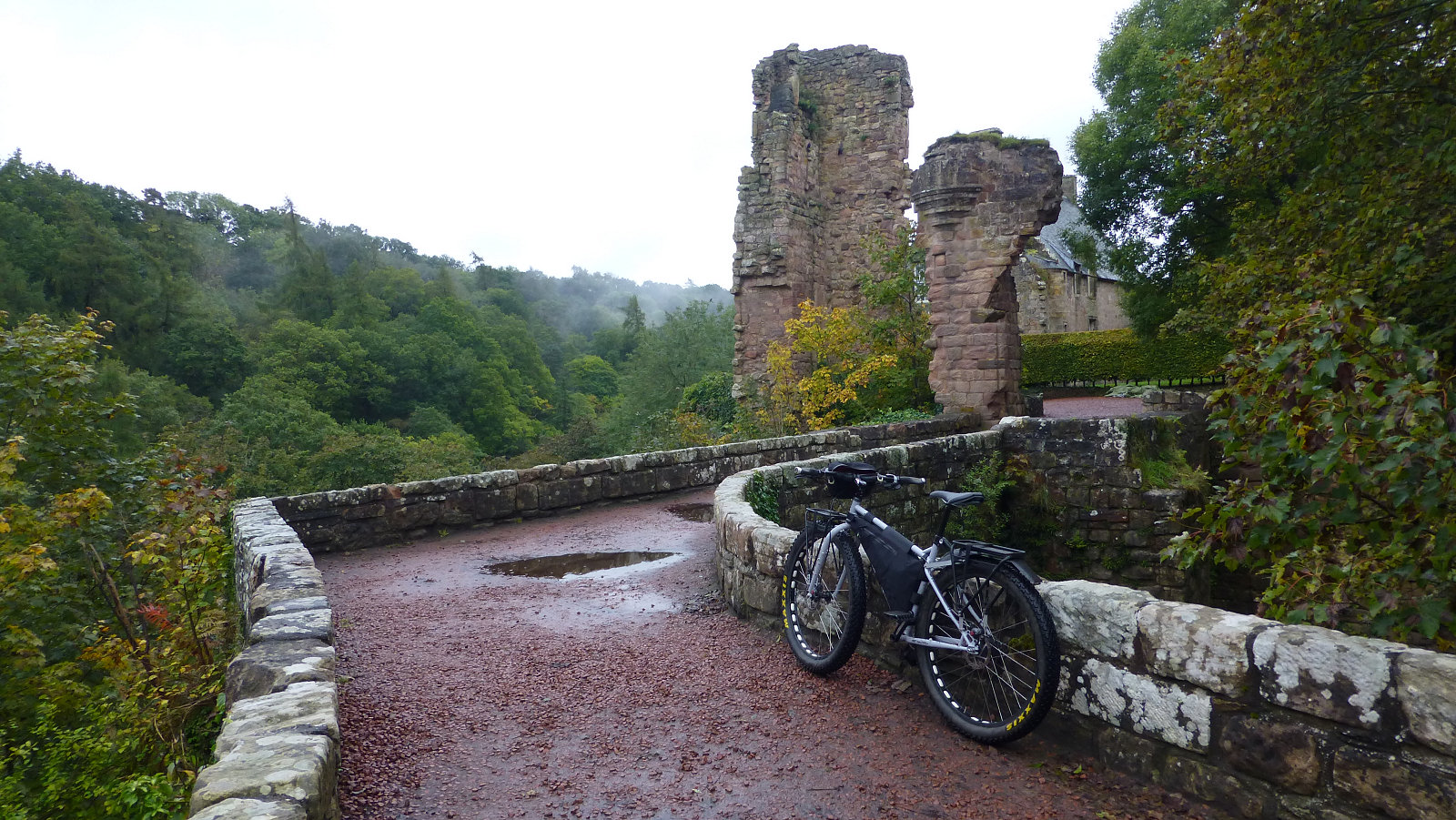 An easy cycle through Roslin village had me picking up another disused railway line cycle route this time heading east towards Shawfair some 5 miles distant. And the great thing is it’s either flat or downhill all the way! This is one of the reasons why I like this route so much, especially on the Swifty kick scooter. Almost all the route, other than a short stretch from Rosewell, that I’m following today, is well lit at night and makes an amazing night ride or scoot. 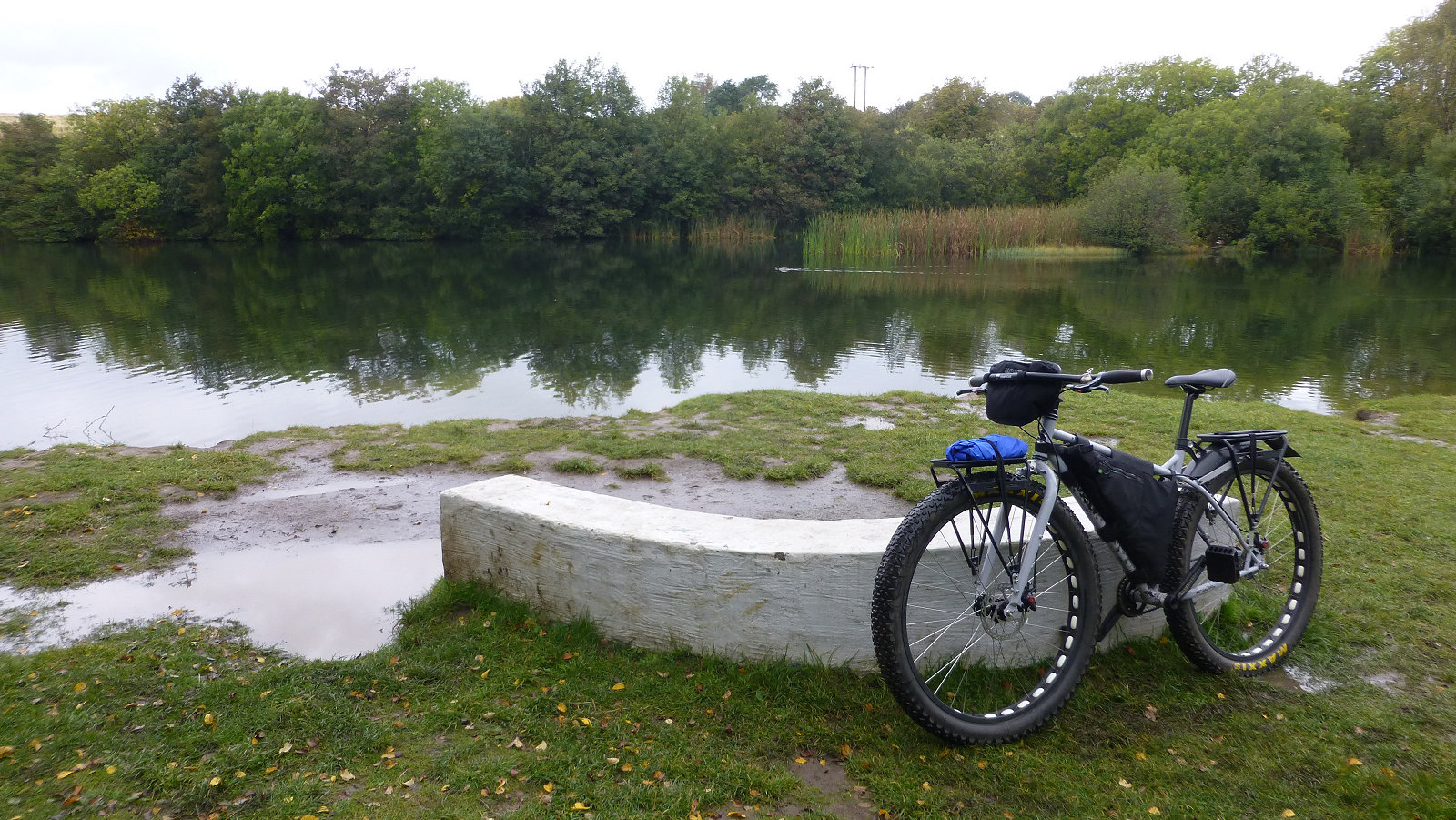 Now, it would have been perfect to click into 8th gear and blast down the 5 miles to Shawfair, however, being a Sunday morning I did not have the place to myself. There were plenty of dog walkers, runners and other cyclists to contend with, though a quick tinkle on the bell gives them good warning of my approach. I’ve actually kick scooted this route a number of times in the wee small hours and have not met a single person. I think I prefer the wee small hours. And an added bonus, the sun was now shining. 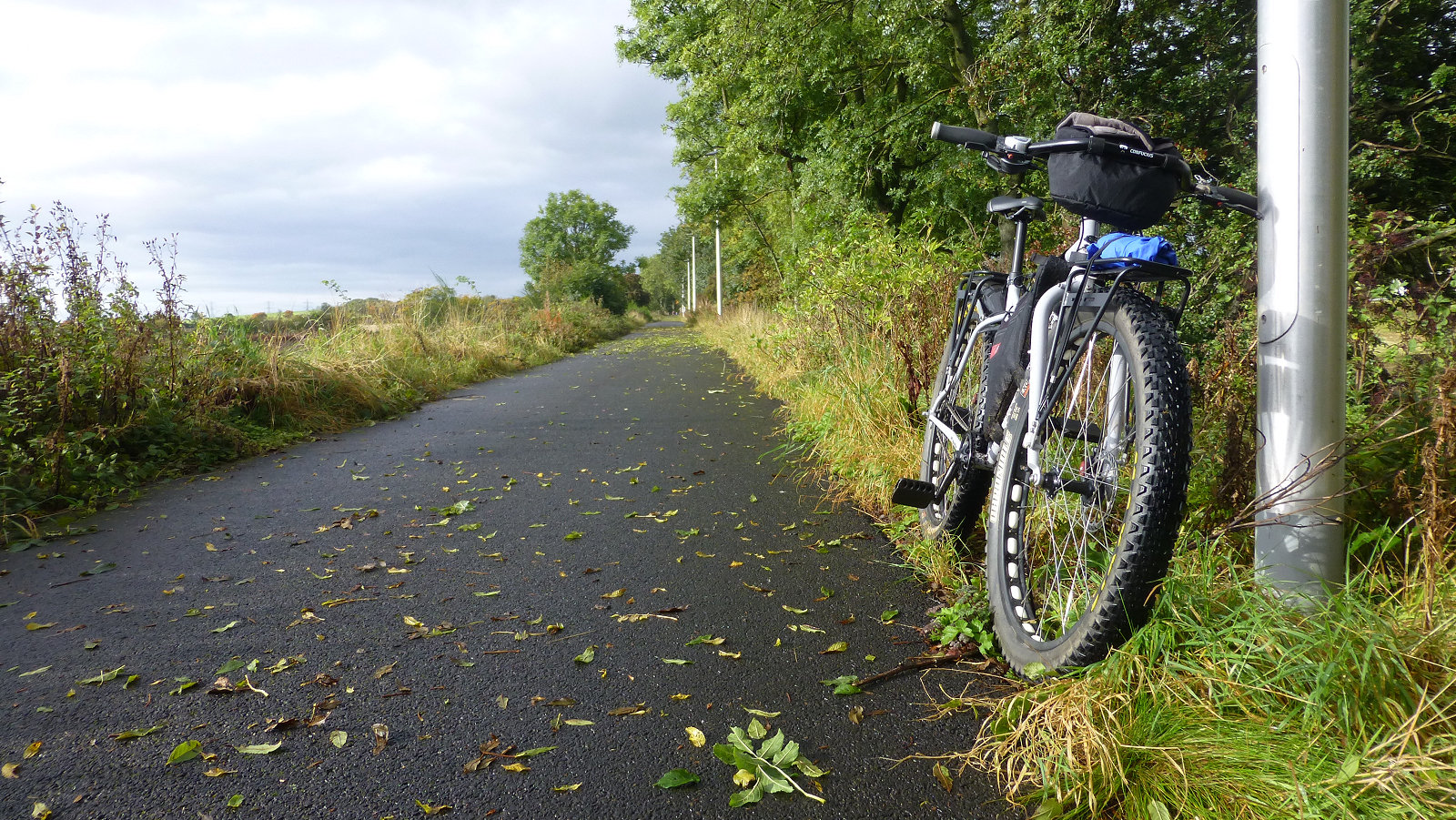 Reaching Shawfair, a slight detour west to follow a track known as The Kaims, one I’d done recently on the Swifty, brought me out at the Sherrifhall roundabout, where crossing the busy A720 City of Edinburgh Bypass can be interesting to say the least. There are traffic lights but no provision for any traffic other than road vehicles. However, plans are afoot to improve things here and there will be underpasses for non-vehicular traffic.

Twenty minutes later I was back home, less than 2 hours for the 13 mile route. Yes, I know that not exactly very fast but I did make a detour to Straiton Pond and stopped loads of times to take photographs, so not too bad really and it’s not a race. So, cycling or kick scooting, that is the question? To be honest, I like both equally for this route but if I had to have a favourite it would be a kick scoot in the wee small hours, otherwise known as Silly O’clock.

This entry was posted in Cycling, Trails. Bookmark the permalink.