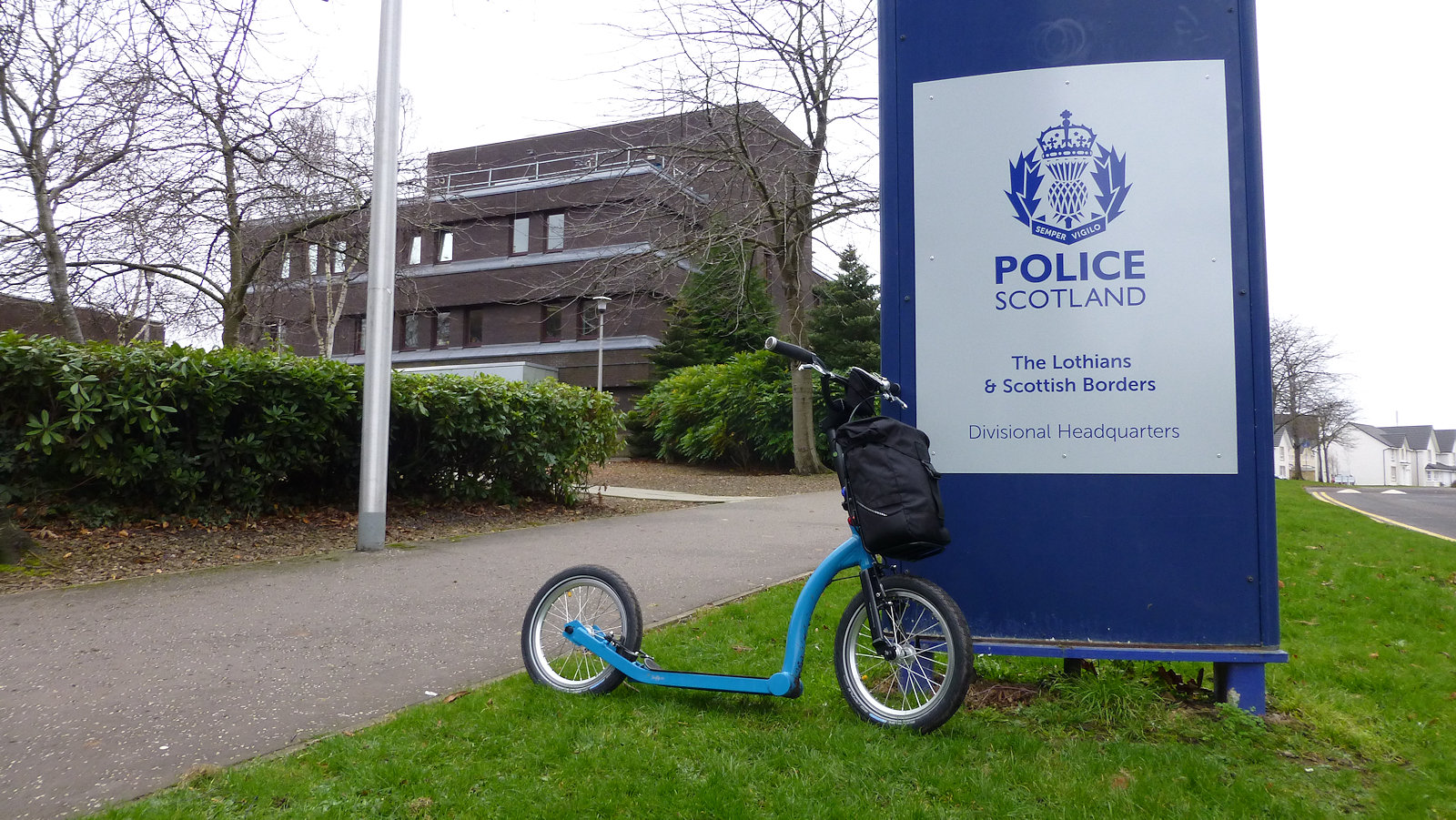 Here in Scotland, where our common sense approach to some, but not all of our laws, gave us something called the Scottish Outdoor Access Code, brought into law with the Land Reform (Scotland) Act 2003. We have the right to walk, cycle, run or ride a horse, on just about any footpath, cycleway, trail or road. Of course, only if exercised using common sense and following a few simple practical guidelines.

Now, you may be wondering why I haven’t mentioned anything about kick scooters. Simply, they are not mentioned. So, where does that leave us kick scooterists? Now, I’m not a lawyer, so this is not legal advice, just a personal opinion. The fact that scooters are not mentioned should not be an issue. I see no problem riding a kick scooter in accordance with the Scottish Outdoor Access Code (SOAC) – it’s a weighty tome so I’m not going into detail – suffice to say that as long as we scoot with common sense, we should be okay.

Now, on to the subject of pavements. Cycling is a big no-no, same as the rest of the country but to the best of my knowledge I cannot find any reference to kick or push scooters, not even when used by children. So, if there’s no law, it should therefor be legal to use a kick scooter on the pavements of Scotland. Again, I must stress that you should only do this with common sense, give way to pedestrians when required and don’t be stupid. For example, scooting along Edinburgh’s Princes Street on a busy Saturday near Christmas is probably not a good idea.

So, baring in mind that the SOAC states we can ride a kick scooter just about anywhere (within reason), where should be avoid riding? Again, common sense should be our guide here. Avoid locations where you will cause any damage, for example, try and avoid Sites of Special Scientific Interest (SSSI’s) or environmentally sensitive areas. Major railway stations, for example, Edinburgh’s Waverley Station should not be scooted upon because you will get shouted at. Un-manned smaller stations are probably okay. Certain parks, such as Edinburgh’s Botanic Gardens do not permit scooters, so others may follow the same rules. In council run parks, such as Princess Street Gardens, kick scooters, as well as cycling are permitted.

Now, the matter of golf courses. The SOAC notes we can exercise access rights to cross over a golf course with obviously sensible guidance to keep off golf greens, avoid damaging the playing surface and not interfere with play. It also mentions, in relation to cyclists and horse-riders, to follow paths where they exist. Does than mean, as we are neither cyclists nor horse riders, that we don’t need to follow paths if they don’t exist? My personal rules are to avoid golf course when play is in progress, make use of existing tracks where available and keep to the edge of the fairway when not.

There does not seem to be any laws specifically relating to kick scooters. However, I would strongly advise all scooter riders to exercise good old common sense, regardless of where you are scooting, be it out in the wilds of the Scottish Highlands or the tourists laden streets of Edinburgh. Give way to pedestrians, horse riders and dog walkers, scoot sensibly and don’t be an idiot. I would also suggest you follow the guidance in the Highway Code relating to cyclists, such as having front and rear lights, stopping at crossings and so on.