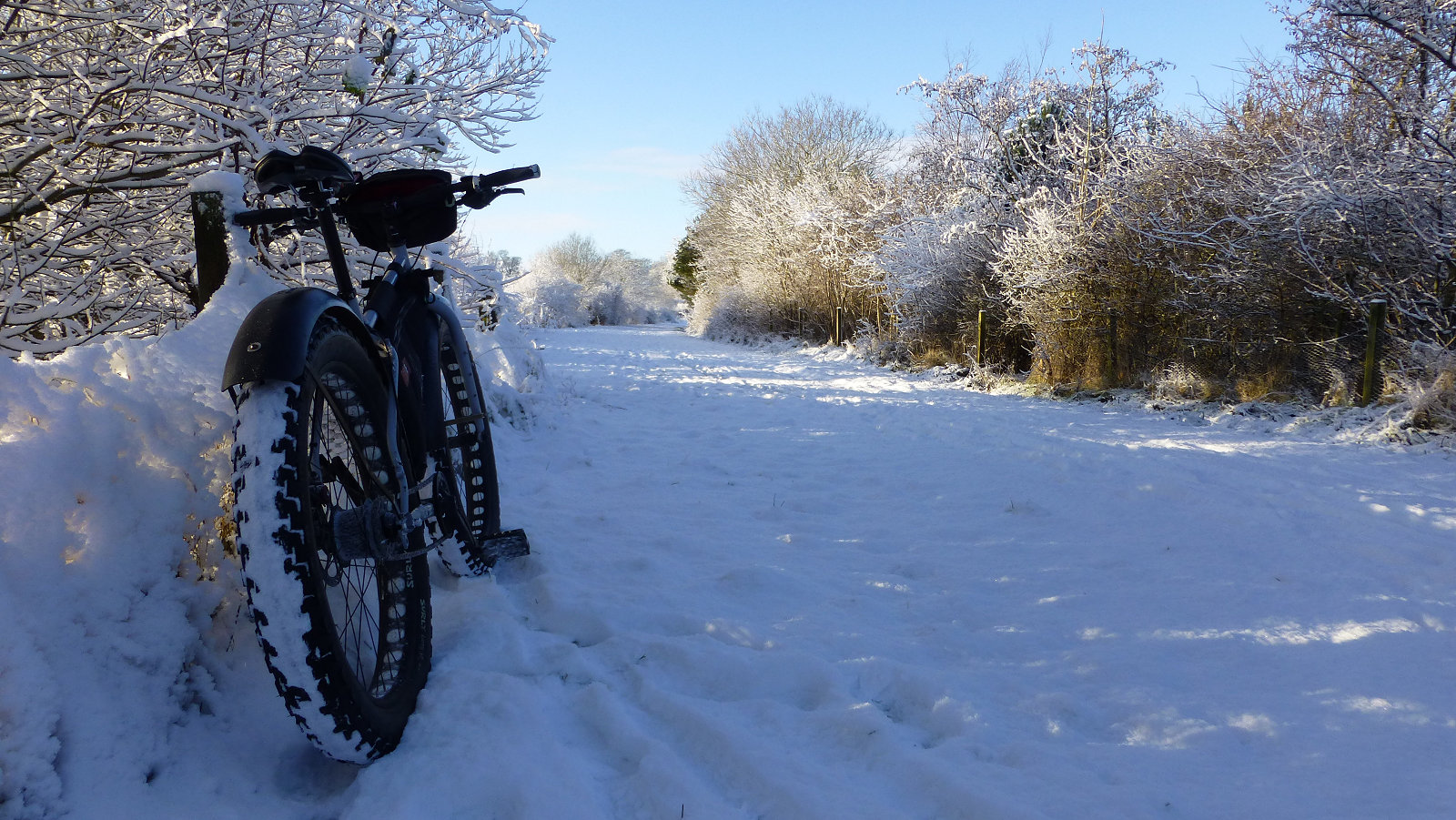 Having seen messages about the difficulties encountered when lying snow is making turfing difficult, nay impossible on a normal bicycle, even one fitted with studded tyres, I was to share a little secret that is the answer to this problem, the not-so-humble Surly Pugsley fat bike.

I built my Surly Pugsley over 10 years ago now, when that was what you had to do, as a complete bike was not available, only the frame and forks. In fact, sourcing all the non-standard parts – frame and forks, 100mm tyres, 65 mm wide rims and 100 mm wide bottom bracket, was quite a challenge at the time but worth it in the end. I recall the first time I took the Pugsley up to the wind farm on a snow and ice covered Bowbeat Hill, in the Moorfoot Hills. Was one of the most amazing bicycle rides I’d had at that time.

The idea behind a fat bike is simply really. You run really wide tyres – usually between 100 and 150 mm wide – at very low pressure, and you get a very large tyre footprint, providing amazing grip on compacted snow or rough ice. Yes, it does take a little bit more effort to pedal but the wide-grin, fun factor, soon makes that immaterial, you just run one gear lower that normal and what’s the rush, fat biking should be fun. There is also the comfort that these huge tyres also provide.

Something that a fat bikes gives you in snow and icy conditions is confidence. You might start cautious at first but you soon realise that you can, within reason, just about blast through anything. Fresh snow up to 150 mm deep, as long as it not too wet, is easy enough and dry powder snow is a breeze. You just roll over compacted snow turned to ice, same with frozen puddles and running water, just take care when steering to change direction or on corners. Note that a fat bike is not a big-tyred 4×4 and won’t go everywhere, though having said that, it’s often the rider’s legs, fitness or courage that let you down, not the bike.

There are some snow conditions that are tricky, to say the least. When cycling in blizzards visibility can be a problem, and good quality goggles are a must. It can be difficult to see the way ahead and more than once I’d ploughed into a snow drift, or caught the edge of a wheel track and come to a dead stop. But as you tend to ride slowly with a fat bike, not a problem. Snow that’s been in contact with salt – I call it sugar snow – and wet slushy snow, are as slippery and tricky as you would imagine but still rideable with care. My favourite recollection was a neighbour with an expensive Range Rover who was struggling to climb a short hill on a snow covered street. I sailed past him on the Surly Pugsley, the tyres gripping the snow-pack with ease. Not sure he was very happy!

My Surly Pugsley cost about £2500 to build, about the same as they cost off-the-shelf today, but you might pick one up much cheaper second-hand and there are loads of other makes and models available. You may think that’s a lot of money for something you only use during our infrequent winter snows but you can actually ride them all year round. They are particularly good at the coast, on sandy beaches.

I’ve lost count how many times I’ve ridden out the midget submarine wrecks in Aberlady Bay at low tide, then followed the coast all the way to North Berwick and back, much of the route on sandy trails and through the sand dunes. They are also at home out in the hills. If you know the route from the aircraft beacon on Broadlaw, up in the Tweedsmuir Hills, and follow the fence down to Talla, across peat bog and tussock grass, you will know exactly what I mean.

You know, people scoff at fat bike, some are just plain dismissive and some just laugh at you. Yes, there are hard work on tarmac and I wouldn’t use it for commuting. But it doesn’t matter, I have a Surly Pugsley fat bike and I know the secret to fun. I love my Surly Pugsley. There, I’ve said it!