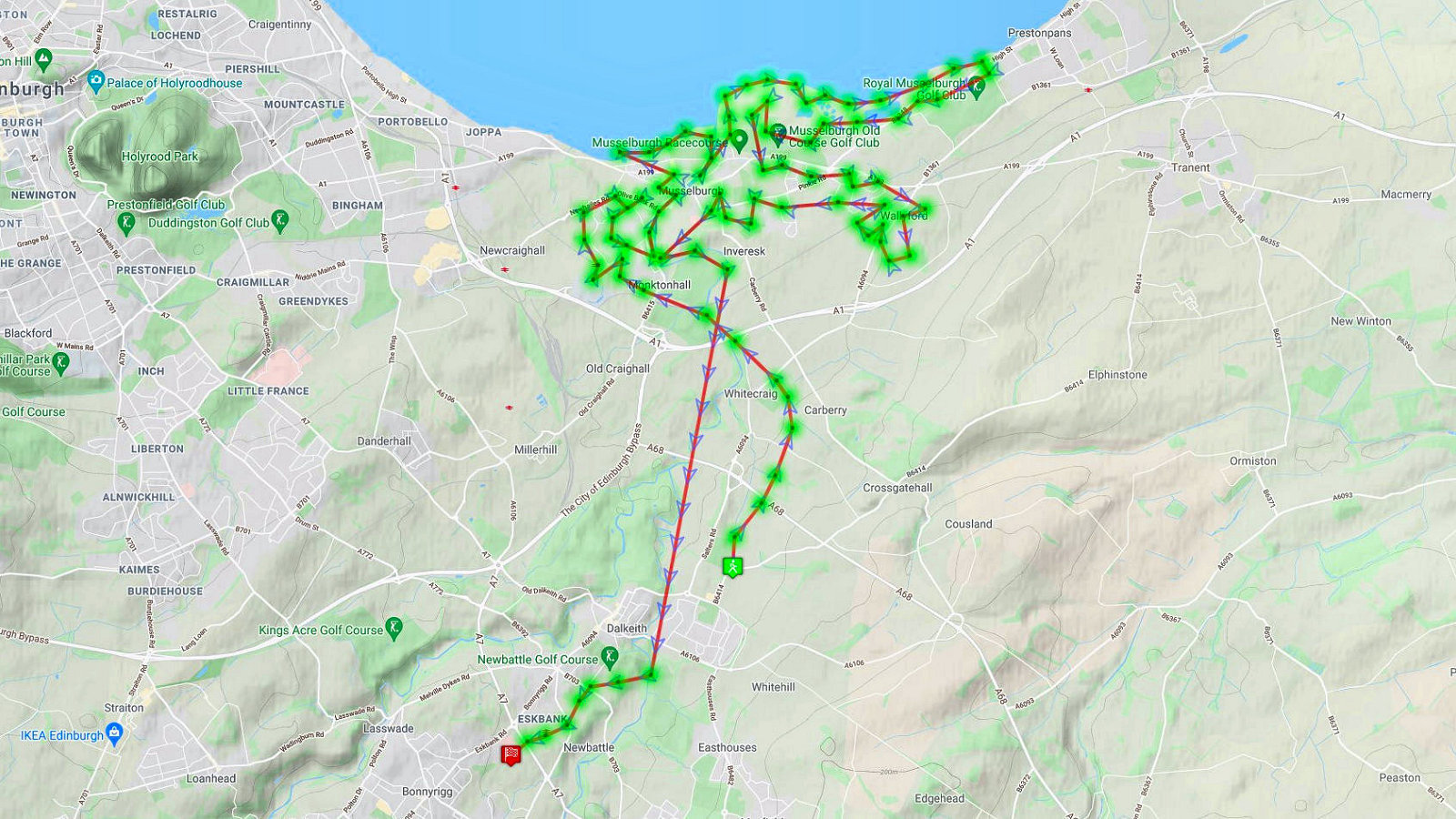 I hadn’t been intentionally aiming for the Greed-300 medal but minimal zone losses over the past week or so saw my zone count sitting at 218 at 6.30 pm on the evening of 31st August. A quick look on the turf app for active turfers showed very little activity. I asked myself, could it just be possible to grab the 82 zones I needed this evening? And even if there were losses to other turfers, I could probably make those up the next day. I decided to give it a go. If I could get the zone count up to 250, that would make it easier to finish off the next day. I recall Féarglas mentioning that the best time for medals attempts is often during the night when there are fewer turfers about to take zones from you. Good advice.

Where to go was my next question? There were two likely candidate areas, one was the Penicuik area and the other Musselburgh and Wallyford. Musselburgh had around 85 zones and the Penicuik area had around 95, if you include the outlying areas such as Bilston and Glencorse. As it was a nice evening, I opted for a trip to the seaside. Musselburgh it was. There was also an easy strip of some 12 zones along the shore at Portobello, ideal to keep in the back pocket just in case. The turf map tool at https://turf.urbangeeks.org/ allows you to draw an irregular polygon around any cluster of zones and will give you stats for the zones within the selected area. Very useful for planning your turfing sessions.

My route followed the same route I’d cycled on my pervious visit to Musselburgh at the start of the month for the Diversier medal. I again divided Musselburgh into sections, starting with the Stoneybank area, followed by Fisherrow. Then it was along to Levenhall Links and then along as far as Prestonpans, next Prestongrange and back to the town centre, the Pinkie area, Wallyford and finally, Inveresk. It seemed sensible and easier to follow a known route rather than anything different, saving time and energy, the latter being the most important. I posted messages on the turf app and also on the Turf Scotland WhatsApp group asking if turfers would not take any of the zones I already held. I hoped this would help minimise any losses while I was out and thankfully, it did, so many, many thanks to all who refrained and also watched my probably amusing antics on the turf app.

Without going into too much detail about each and every zone take, everything went very well. By the time I reached Levenhall Links is almost totally dark and I was quite surprised to see how many dog walkers, wheezing joggers and covert snoggers were out in the darkness, all without torches. It’s quite difficult to see people clad all in dark clothing, against a dark background of trees surrounded by a pack of dark coloured hounds.

At Prestonpans I grabbed a couple of extra zones, Inchview and CuthillPark, then it was along to Prestongrange museum for the three zones there. A young couple were sitting there in the dark. I wonder what they were up to? After that it was back into Levenhall Links to pick of the remaining zones along the race course side of the area. I hadn’t realised at the time but I’d missed a couple of zones that were included in my original area calculation, GoshenFarm and DrummohrWall. However, the two extra zones from Prestonpans made up for those, so nothing to bother about.

After taking zones in the Pinkie area, it was up to Wallyford for the 10 zones I needed there. It was slightly perturbed to get a message from TheInquisitor, saying how brave I was being in Wallyford after sundown. Actually, I wasn’t too bothered as I’m a Feng Shui Master, having studied with mystic monks in the Tibetan region of China and can use the energy forces of wind and water to harmonize any would be local pissheads, bampots or nedheads with the surrounding environment. Thankfully, my geomancy powers were untested and I survived my nocturnal visit to Wallyford.

After Wallyford was conquered and I remained unscathed, I now needed just the 10 zones for the Greed-300 medal and the final collection of zones was in the centre of Musselburgh, all easy enough to find and take. By 10:30 pm, having done a solid 4 hours in the saddle, I was getting very weary by now but the final zone, WedderburnLow, was in my sights. And a very pleasing sight it was too. Then the seemingly never ended wait for the zone to take. It’s as if time slows down, the seconds stretch on forever, while you wait, and wait, and wait. But in reality it’s only a few seconds and up pops the zone taken message. Then the zone count changes from 299 to 300. I hold my breath and wait. Wait some more. Still waiting. Up pops the Greed-300 medal. I can breathe again, mission accomplished.

My delight at gaining the Greed-300 medal is somewhat dampered by the fact that I now have a 7 miles cycle home to Bonnyrigg, and it was getting rather chilly down by the river, despite my three layers of clothing. Bad planning on my part. I should have kept some zones untaken locally, so that the final flurry zones would lead me back to the house. But ho-hum, there will always be another medal to go for. Time to head home for a cuppa and some toast, then a welcome soft and cozy bed, and some sleep. Until next time. 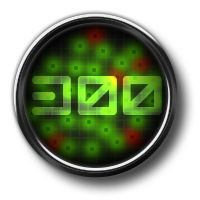 Greed-300 – The greedy turfer who holds at least 300 zones at the same time is awarded this medal.