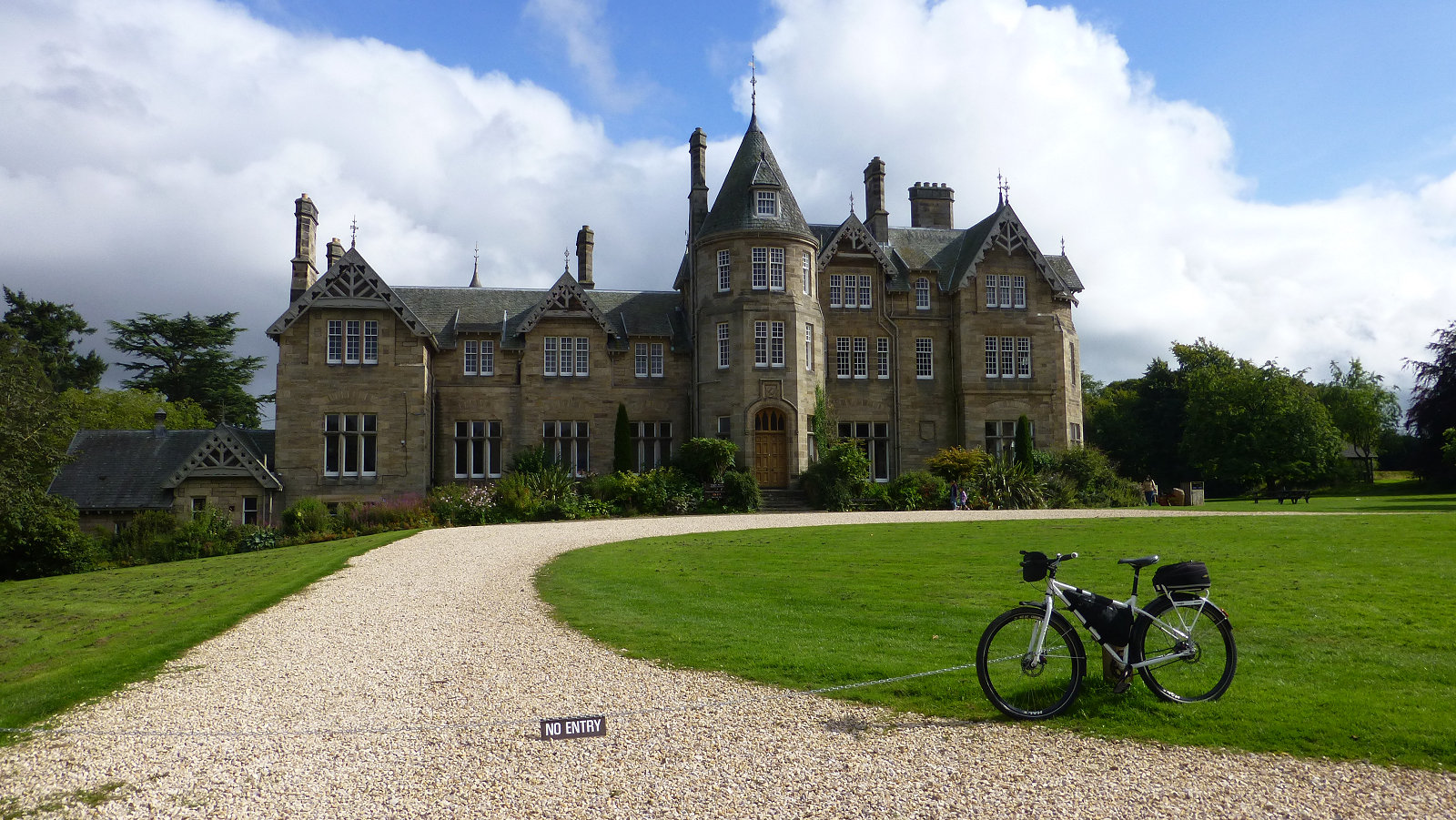 Today was a mopping up odd zones day. Mopping up all those annoying well-spread uniques that you inadvertently miss, are too tired to take at the time, cannot access for whatever reason or simply run out of turfing time itself and need to rush home to make the dinner. I have 19 uniques to get, mostly around Pencaitland with a few in the south of Midlothian. Just wanted to get them taken and have a nice neat turf map with only little white circles and no red dots. Or at least until some new zones appear, probably just after I’ve finished taking all the uniques in the area. I’m sure the zone makers like to toy with us sometimes.

With my first unique being zone TrainTrack, to the south of Port Seton, I had a 10-mile cycle even before I started taking uniques, though I did take a few zones along the way, so not entirely a waste of turfing or travel time. I could have taken more but decided to conserve energy and only take those that were close by. 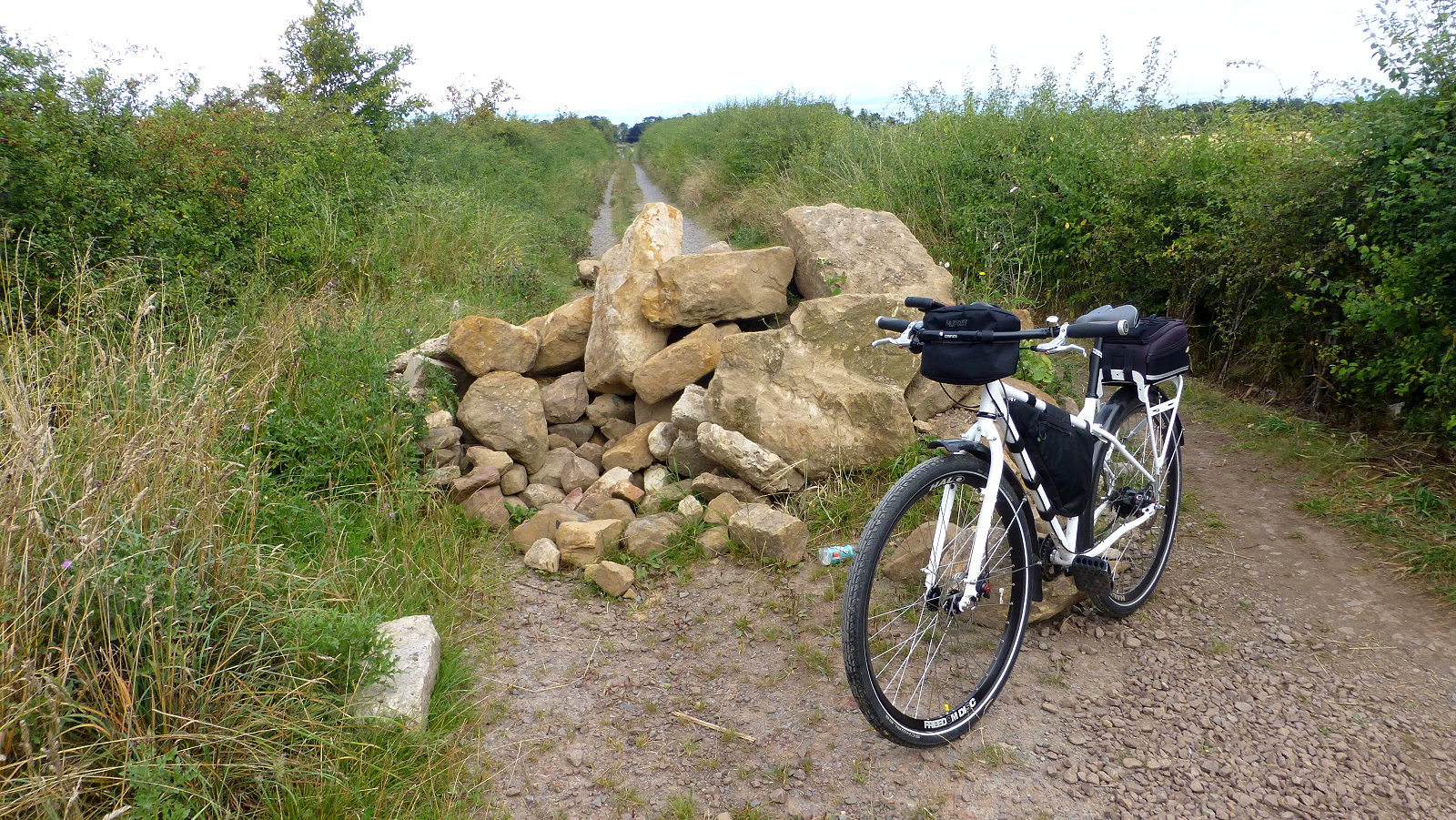 Crossing the railway line was an experience in itself. The barriers were closed, so a train was coming. Soon, it thundered past, heading for The South. Up close on a bicycle, standing at the barrier, you really get the feeling of immense power, weight and sheer mass. I certainly wouldn’t want to get in the way of one. Zone TrainTrack was followed by OpenCastPath, AlmostUnderA1 and WintonResr. Zone OpenCastPath was simply a huge pile of rocks, like a giant mole hill. Had me thinking they must have really big moles in this part of the country.

Must mention an annoying instance at Prestonpans, beside zone ThePits. I was cycling merrily along, minding my own business, in the all-be-it narrow cycle lane, when I was buzzed suddenly by a peloton of road cyclists. You know the snooty-nosed elitist cycling club groups you see out this way at weekends. Well, a bunch of them. They passed me within six inches, causing me no small degree of fright and almost, but not quite, a brown trousers moment. Bastards! I was about to shout, WHY DON’T YOU RING YOUR FUCKING BELL?”. However, decided not because, a) there’s a dozen of them and only one of me, b) they probably don’t have bells anyway as five grams would be too much extra weight, and c) are unlikely to even hear my shout. I don’t think they would know how to operate a bell even if they did have one! Rant over. 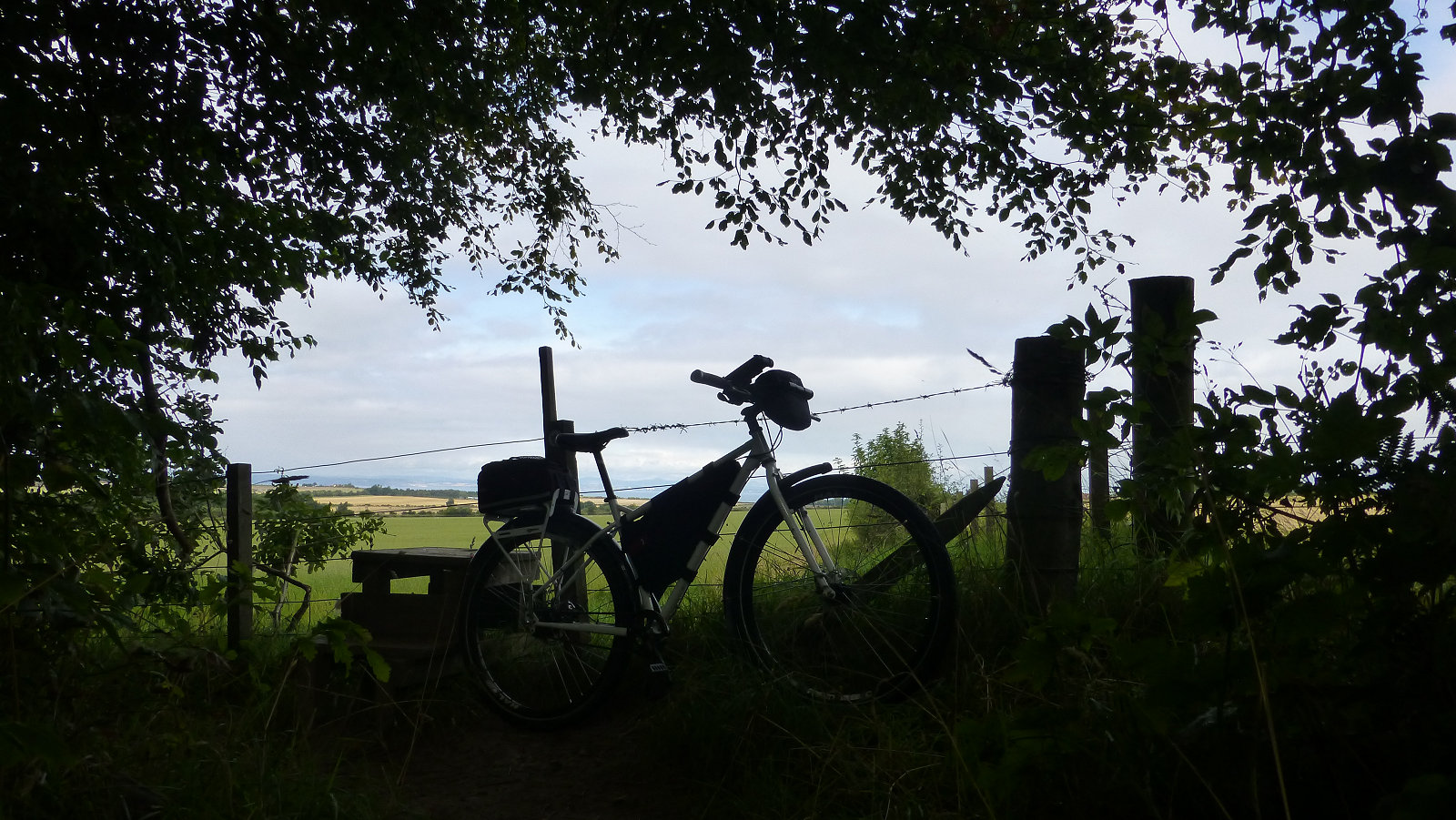 The next two zones, ForthTreeView and GladsmuirKirk, were zones I’d missed on my recent venture out this way a few days ago. Not sure why I missed them but I did. Probably not paying enough attention to the turf app, or zoomed in too close and they were off the screen. Not that it matters, they are taken now. The weather took a turn for the worse as I approached GladsmuirKirk, meaning it was on with the waterproofs or get wet from the drizzle. However, it didn’t last long and they were soon relegated back into the rack bag.

My next destination was the Walk plantation, and zones WalkPlant, DeanBurnTurn,
WadeBoggs, DeanBoggs, ByDeanBurn and PrivateMains. My approach was from Macmerry after taking a few zones there. At zone PenstonPath, I thought I’d have to loop further round to the west and then down but a swing gate and sign suggested a path along the field boundary to the zones. I call this a “Path of Hope”, in that I hoped it would not peter out and would take me where I wanted to go. It did, though was very rough on the road bike but rideable slowly with care. It’s little more than a rabbit trail as it nears the wood, with added nettles and thistles for good measure. Oh, and the field was full of sheep, so lots of little squishy brown jobs about the place. 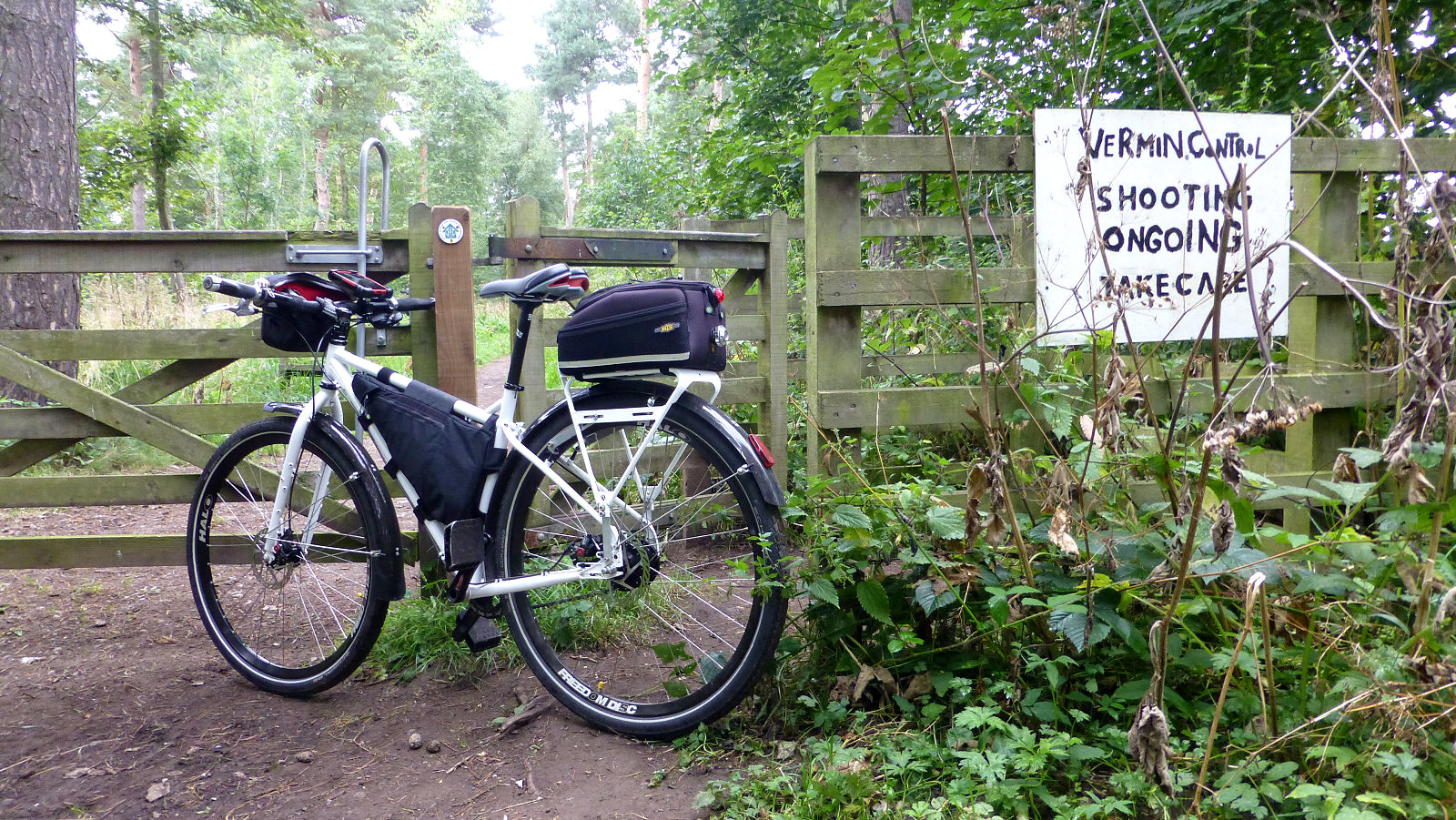 A message on the turf app. Better not mention who it was. Oh dear, looks like I’ve upset somebody. Must be on their local turf and taking their zones. I do humbly apologize profusely and promise I won’t let it happen again. No, that’s not right! On your bike matey, I’d be back again tomorrow and the next day, and the day after that as well. But not the day after that because I’ll be bored by then. Only joking! Just think of all the points you get when you take them back. I’m sure you were stealing zones in Edinburgh the other day? In no way had getting my own back even entered my mind, my local patch is Midlothian.

At this point I gave turfing a rest and popped along the Boggs Holdings to visit an ex-colleague from Sight Scotland. George is the Facilities manager there and he had recently moved here from Musselburgh. And while it was nice to catch up, I really wanted to see his new Man Cave, a bloody enormous corrugated tin shed. At 336 square meters, it must be at least six times the floor area of our bungalow and 28 times the size of my shed. I am so very, very jealous. Just imagine how many bicycles I could have, not to mention old motorcycles to restore, a land rover to trick-up and somewhere to polish my dream car, a BMW Z4M Coupe. I’d really like an Aston Martin but this is more affordable as you can pick up a second-hand one for under £15k. 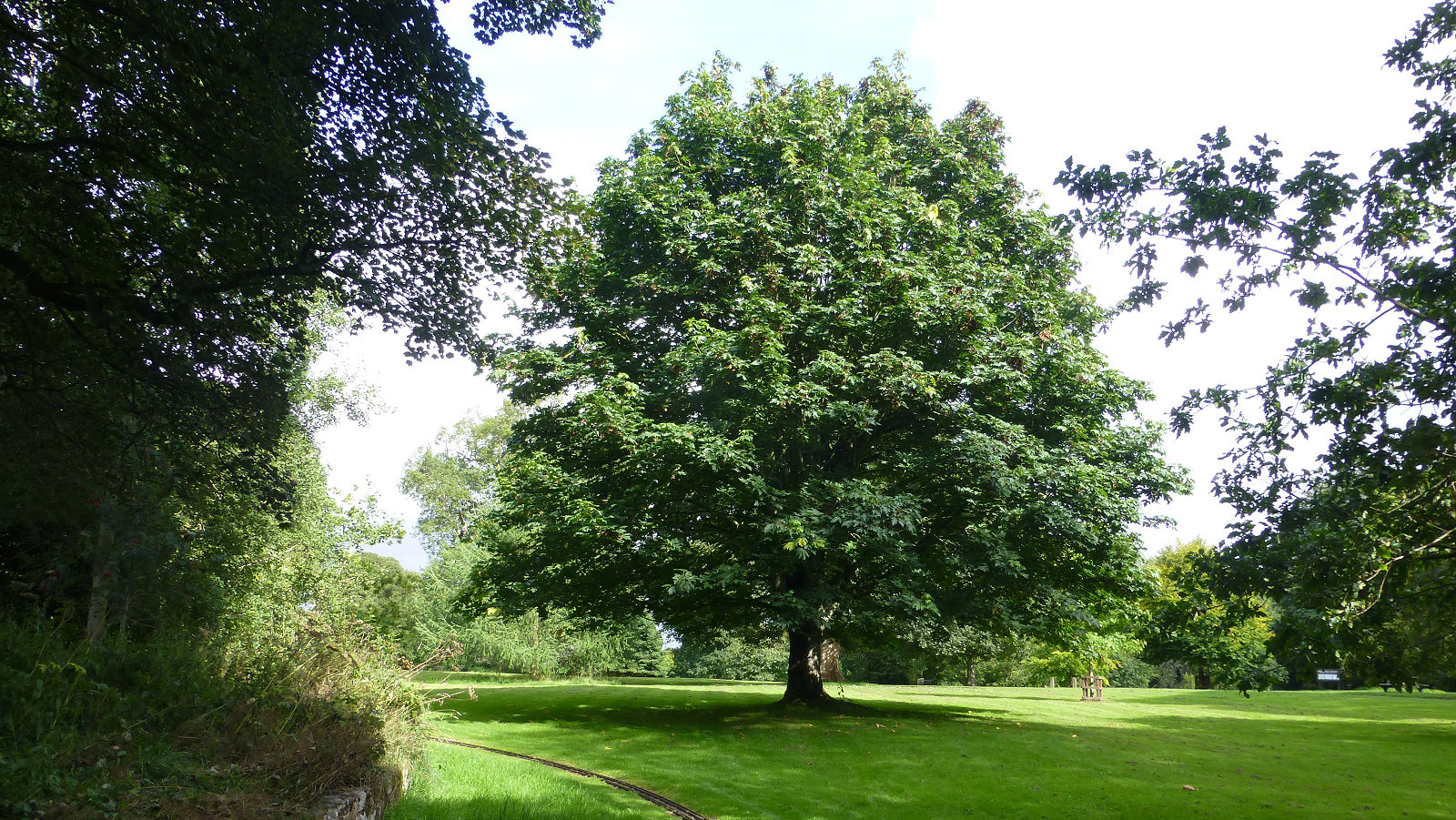 His wife Wendy had just taken scones from the oven. Unfortunately, they were cheese scones. I hate cheese scones and I hate cheese. Cheese should be outlawed and cheese in a scone should be a Capital crime. And the smell of cheese on toast does not bare thinking about. Sadly, I had to decline the offer. But the cup of tea was nice and refreshing, even if it did have sugar in it. I really like scones and one day hope to discover the Scone of Scones but I suspect that perfect scone does not yet exist. But I shall continue my quest and live in hope.

With renewed vigour, I set off turfing again, my legs taking a while to start working properly after sitting idle while chatting for half an hour. Two further uniques were in my sights, ParallelField and SaltounView. On my previous turfing visit, I’d taken zone NisbetBridge, but the path to these two zones looked impassable, or at best a pain in the arse with a bicycle and for that reason I decided to leave them for another day and planned to approach from the south. Even from that direction, the path to SaltounView looked unused but I was able to cycle along the edge of the tattie field and get the zone from there. (For non-Scots speakers South of the Border, a tattie is a potato.) 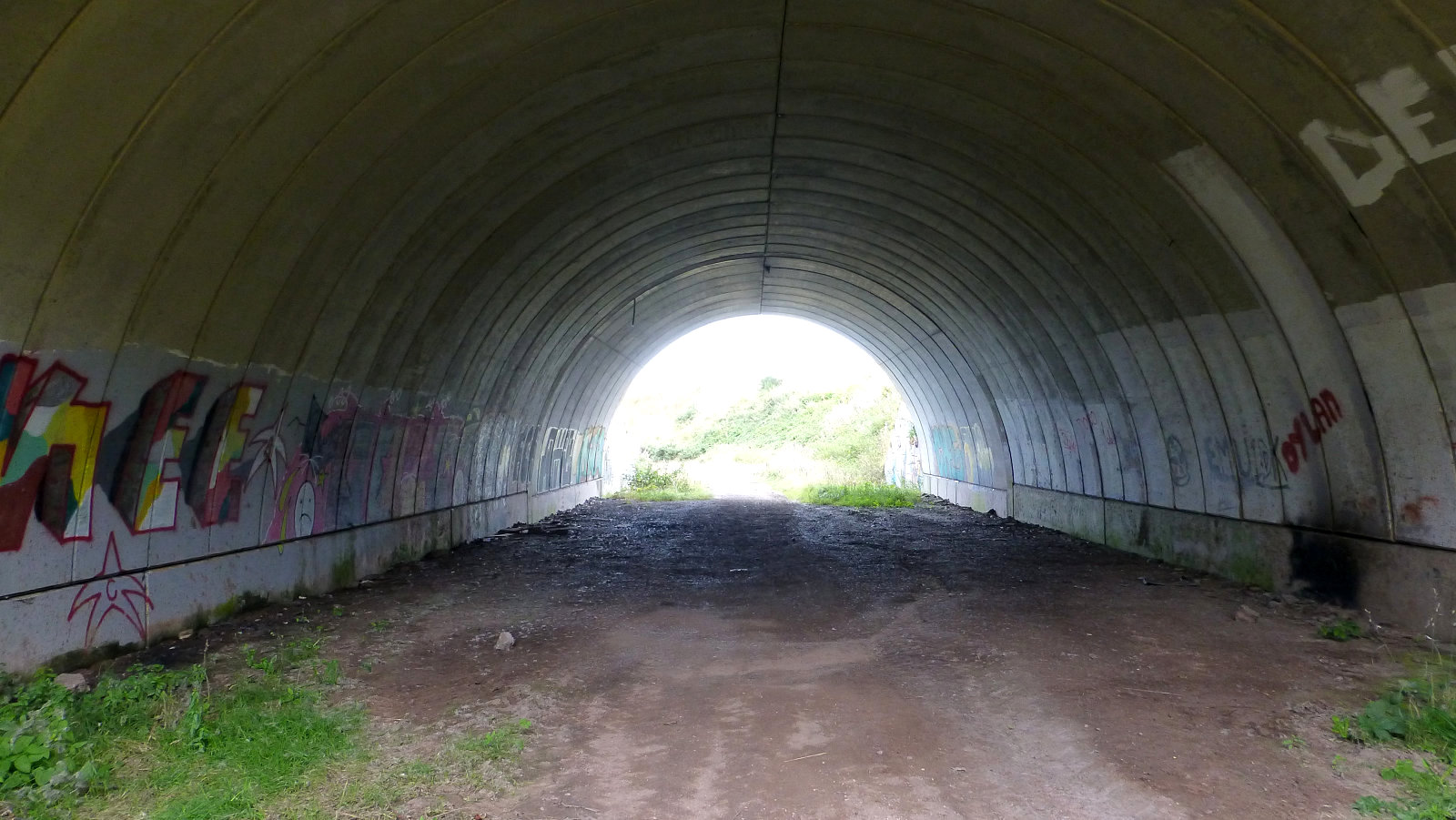 My next two uniques, OxenfoordTurf and CallanderPark, were in Pathhead, and their status still sitting at neutral might just hint at their popularity, or rather lack there-of. From West Saltoun it’s about seven miles to Pathhead and not knowing the area very well, resorted to using Google maps for directions. It was so much easier than trying to see the entire route on the small phone screen. Along the way, I stopped at Glenkinchie Distillery, finding a nice sunny, sheltered spot in the parking area to scoff a late lunch. The time was now 2:30 pm. Once the two zones in Pathhead were taken, I could see why they were not popular. Neither zone has anything of interest, nothing what-so-ever. No wonder they are still neutrals a day before the start of the next round. Their isolation may have something to do with this as well.

On the way to Pathhead, I came across a sign at a Scottish Gas compound stating “Pathhead Pig Trap Site”. This is where they used highly-trained pigs to clean out gas pipes. Big hairy pigs for the big pipes and wee squirming squealing piglets for the smaller bore pipes. The site is where they either enter, or exit, the gas mains. Seems a bit cruel and they even use pig launchers to insert the pigs into the pipes. Mind you, the pigs get very well paid for their services. There’s a “Save the Piggs” camp across the road which was a bit odd. Not only does their spelling need some work but they were frying up some bacon.

Now on the final stretch, it was down through Ford, and along to Vogrie Country Park for the three zones located there. I was caught in a short sharp shower in Ford but found shelter under the trees as I walked up the steep hill. Yes, I’m a wimp, and could have cycled but just couldn’t be bothered. I had been cycling for 5.5 hours! I entered Vogrie at the lodge gate just after Dewar Town, the track leading me straight down to zone VogrieBridge and continuing onwards gave me VogrieHouse. The final unique of the day was VogrieRailway, easily found along the road leading towards the main gate. Easily three of the easiest zones I’ve taken for a while.

And that was that. More soon.