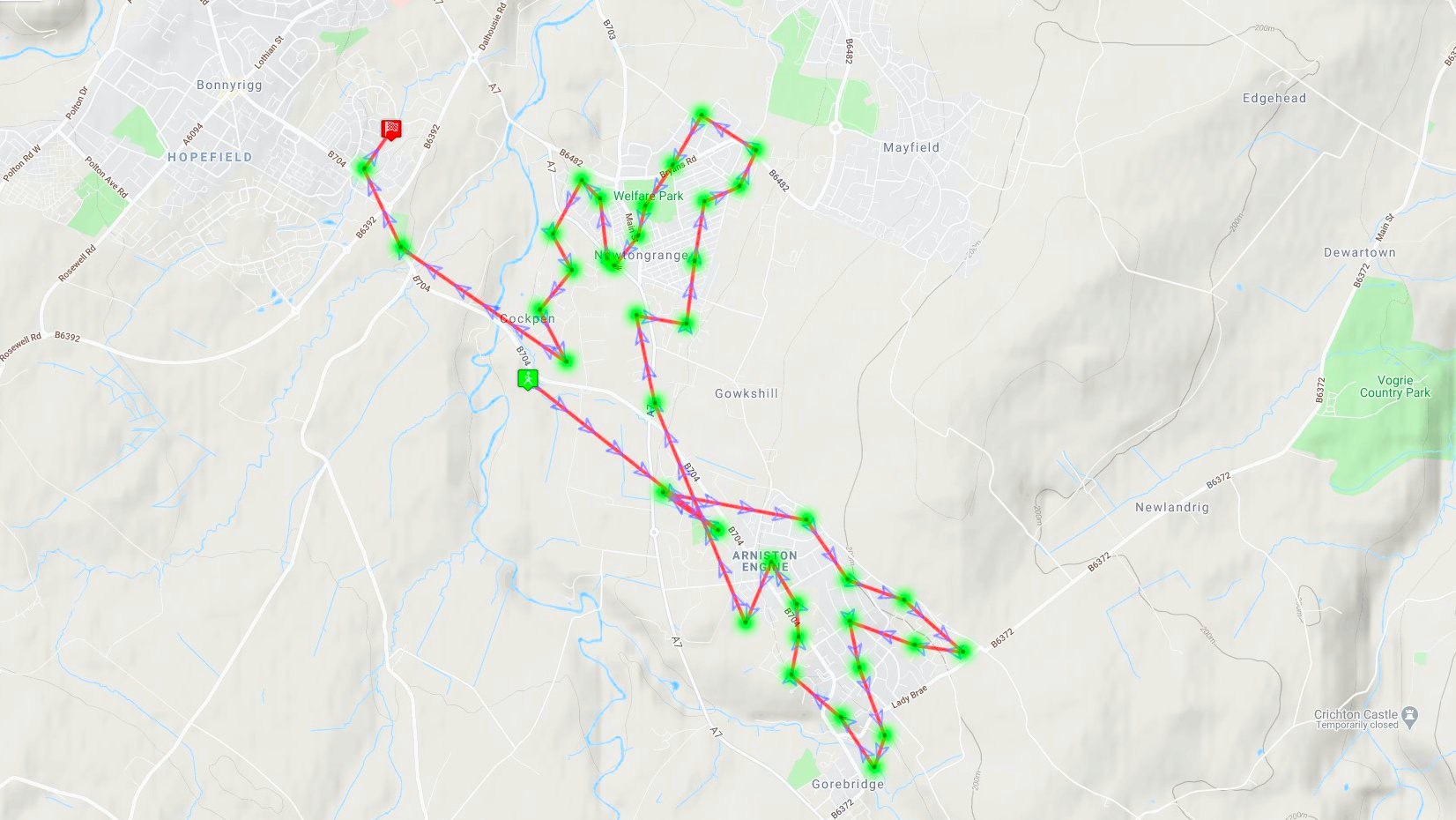 Saturday dawned dull, drizzly and dreich but not too dull, drizzly and dreich to put me off getting out on the Surly Ogre bicycle and taking a few zones, upping my points score before the big round reset tomorrow morning. Unique zones were my main target this morning, starting with zones in Gorebridge, followed by some in Newtongrange, also picking off a few zones lost to other turfers in the past few weeks in the return.

First take of the day, actually a re-take was BlowLoun (185 points), the security fence still in place due to unstable stonework while the old kirk awaits repairs. After crossing the A7, the climbing starts. Gorebridge is built on the side of a steep hill, so it was up, up, up, until there was no more up, then I’d planned to contour my way back and forwards picking off zones as I go, trying not to loose to much height. 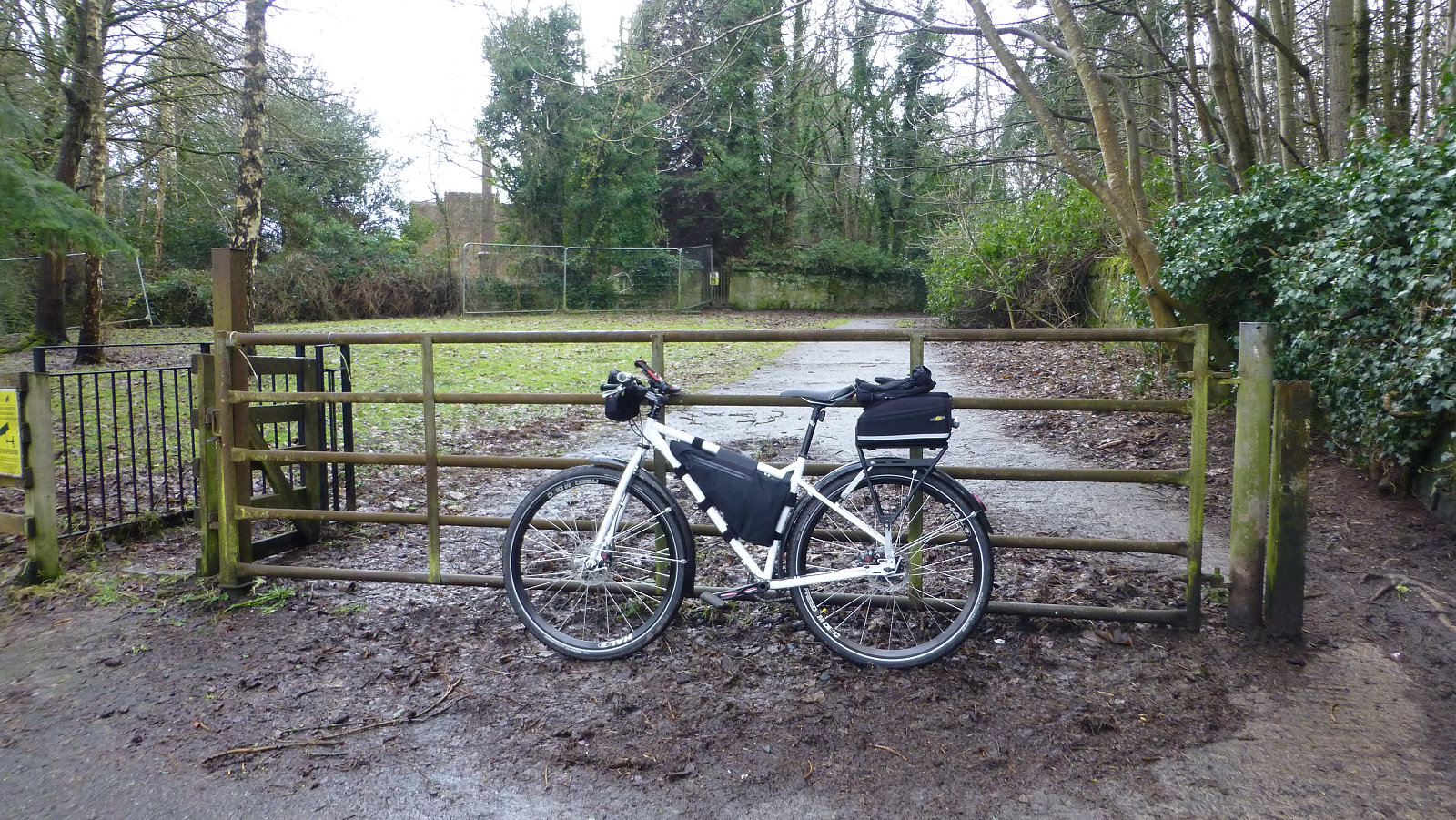 Next on the list was ArnistonPark (185 points) The map showed a nice shortcut along a footpath but alas it was fenced off for some unknown reason and I had to climb further up the hill before dropping back downhill again to take the zone. Most annoying and wasted effort. LochArniston (185 points) was located on the way back up, so not all my hard won effort was wasted.

I was opting for the zones along the outskirts of Gorebridge, aiming for the highest zone in the town. BurnedZone (185 points) was next in line, followed by Carlowrie (185 points) tucked away behind some houses and rather sad looking. BarelyKnow (185 points) fell to Ogre and myself, then a poor choice of route had me puffing uphill again when I could have followed a gentler direct route. Useful knowledge for the next visit. 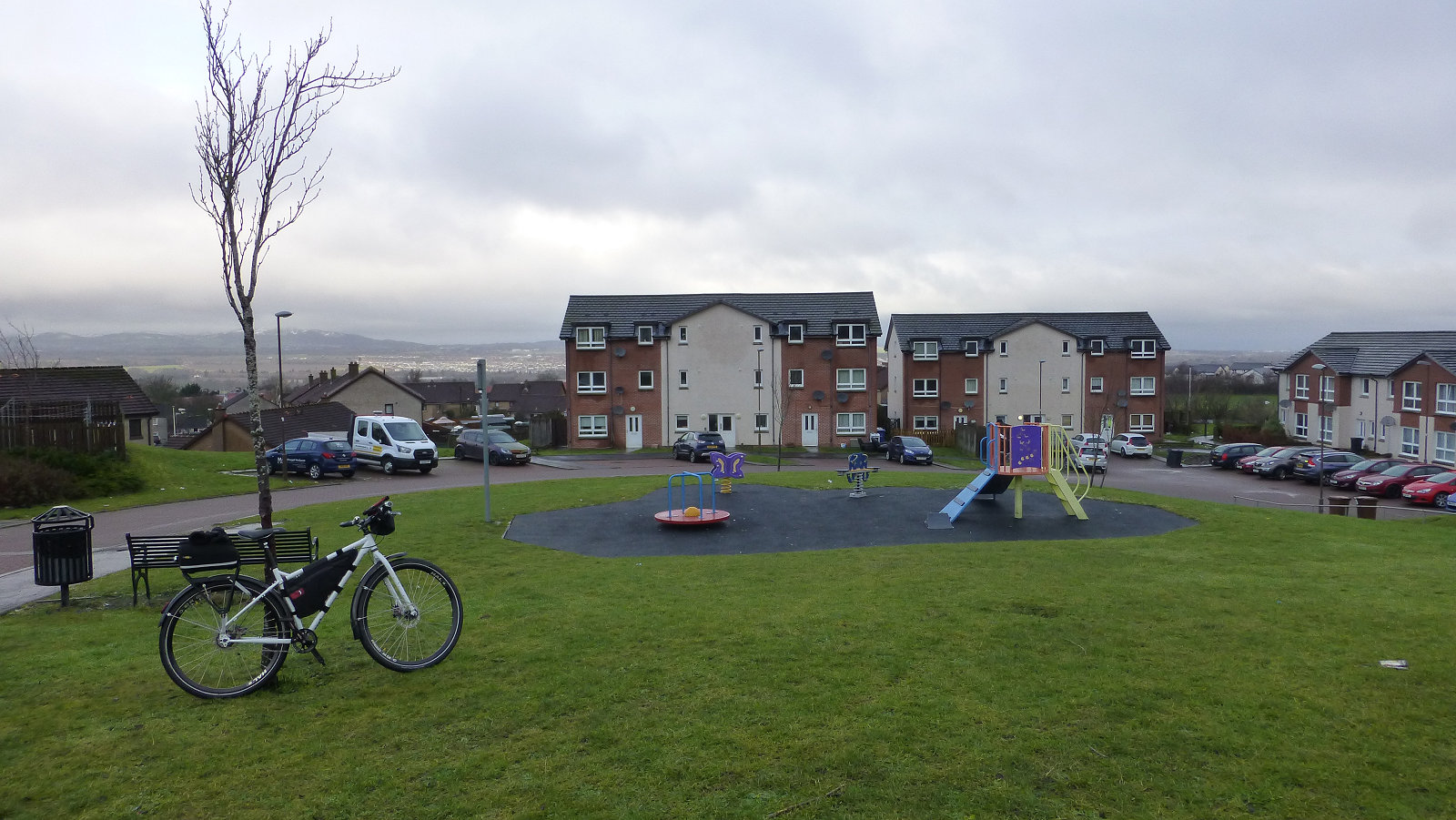 By now I reached the highest zone in Gorebridge, LadyBraesX (185 points) and hoped that I’d not have any more climbing to do. I then enjoyed some easy downhill freewheeling, taking Stobhill, GoreCircle, Bonnybank and LouisBraille, all giving up 185 points each. Next for the taking was TheBank (185 points) and that meant me dropping down as far as the Gore Water. I actually missed the path leading to this one, expecting a proper road rather than a secret wee track hidden between houses on the corner. It was very muddy here and I noticed a dirt track that might be a good option another day. On the plus side I was desperate for a call of nature and the rushing torrent of the Gore Water did not help matters. Thankfully, I was able to find a suitable spot. Such events can often be a problem when turfing and they don’t cover that in the handbook.

From this point I was now heading back towards Bonnyrigg, picking off unique zones on the way. First to fall to the GPS was GoreBridgeSt (185 points) at the railway station. Sorry no pictures of this one, as I forgot to take them. Mental note – try to remember next time. A steep but thankfully short climb past the shops in Gorebridge took me to LadyEmily, followed by ScoutsHonour, both for 185 points. Lady Emily was the name for one of the pits at Arnston Colliery. I initially though ScoutsHonour was inaccessible but I noticed an open gate which let me onto the football pitch. 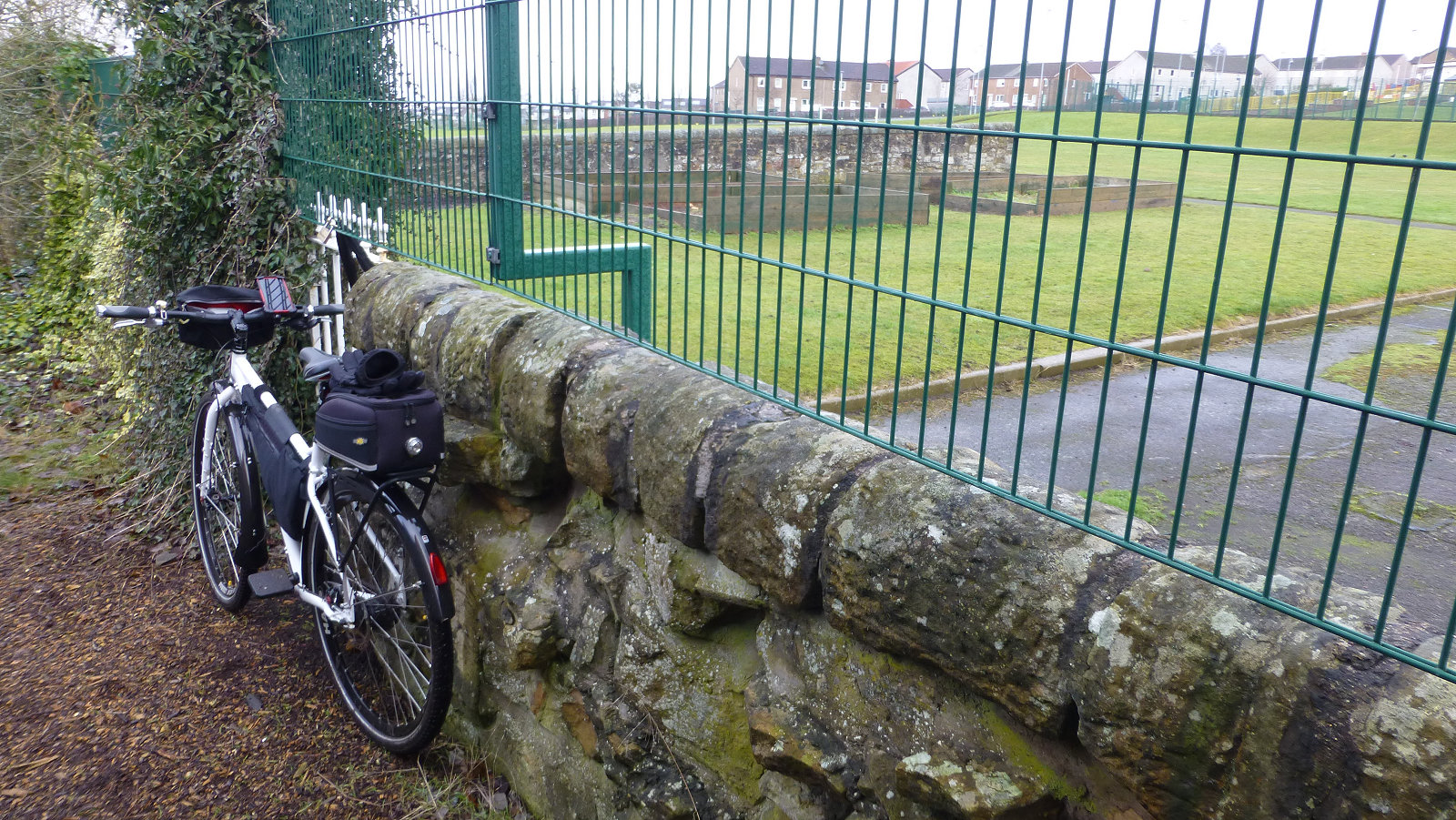 TheBiblebook (185 points), located in some playing fields behind Gorebridge Parish Church was next in line. But there was no access I could see from the Leisure Centre side. There may have been access from the other side but I decided to chance a look behind the church. Lady Luck was with me and I just managed to get the GPS into the edge of the zone and take the points. Did feel rather furtive sneaking around the church buildings, half expecting a police interceptor to screech to a halt when I emerged. In fact, there was a police car when I emerged, but it didn’t stop.

GoreField (185 points) was next, followed with Hunterfield (185 points), a large open space, most of which would have been Arniston Colliery only a few decades ago. Little remains today other than the towering shale bing to the west. The path here today was flooded but did a good job of cleaning the mud from the tyres, picked up at zone TheBank earlier. Another zone, ArnistonBing, was nearby but I decided to leave that very muddy trail for another day. I recall passing this way as a wee lad with my parents and the shale bing was always burning away. 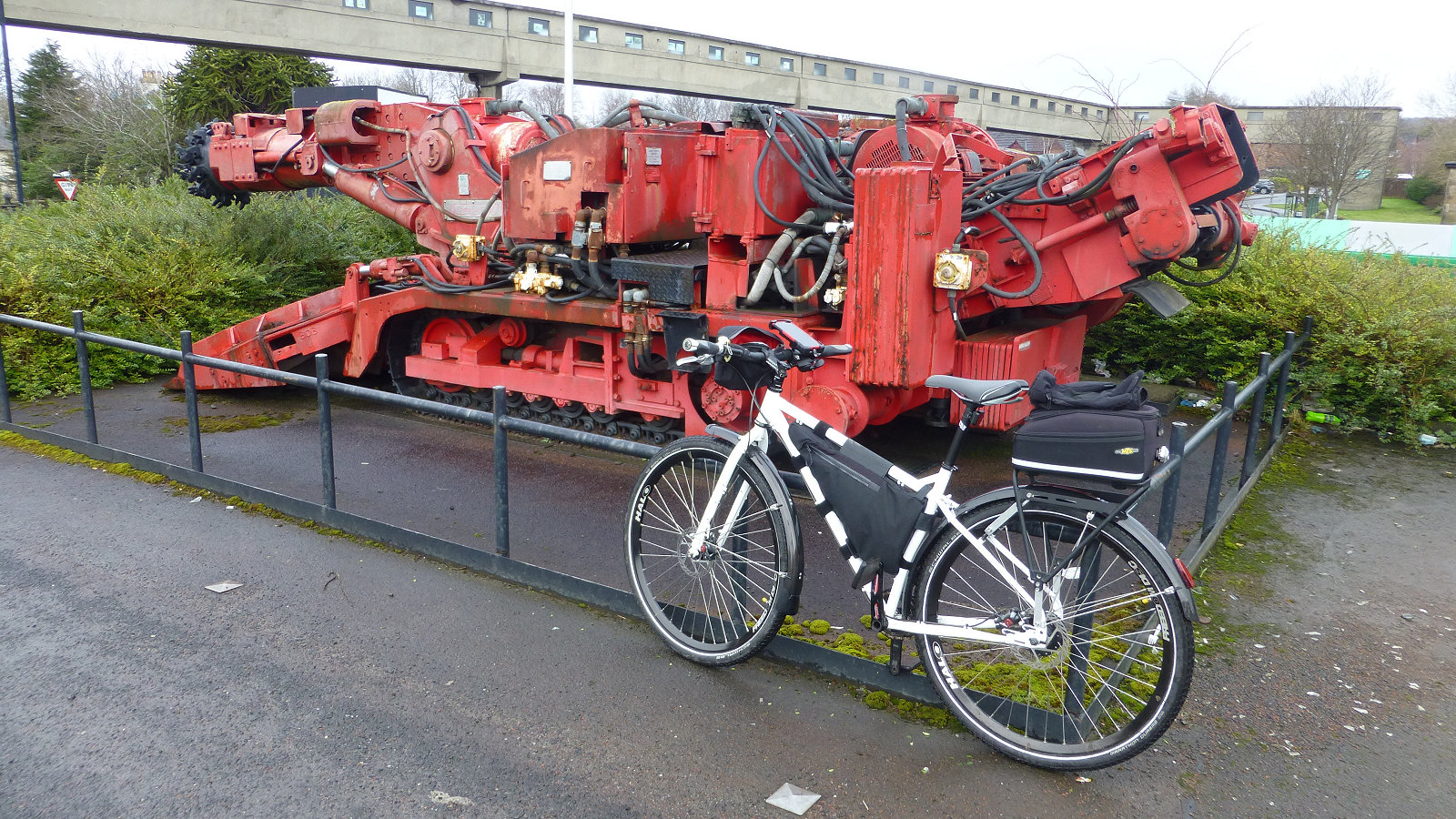 With the Gorebridge zone in the bag, I cycling through Newtongrange, taking a few more unique zones. WayOfAndrew (185 points) was first, then onto the National Mining Museum for MineMuseum (170 points) The main entrance where the zone is located was closed but you can just tag the zone from the corner of the car park. Next across the road was WhatPark (185 points) then a series of zones dotted around the old miner’s cottages including RectangularSq, Between7And8, AroundEighth, Suttieslea, LadyMansfield and BryansStop, all unique zones if my memory is correct and 185 points each. 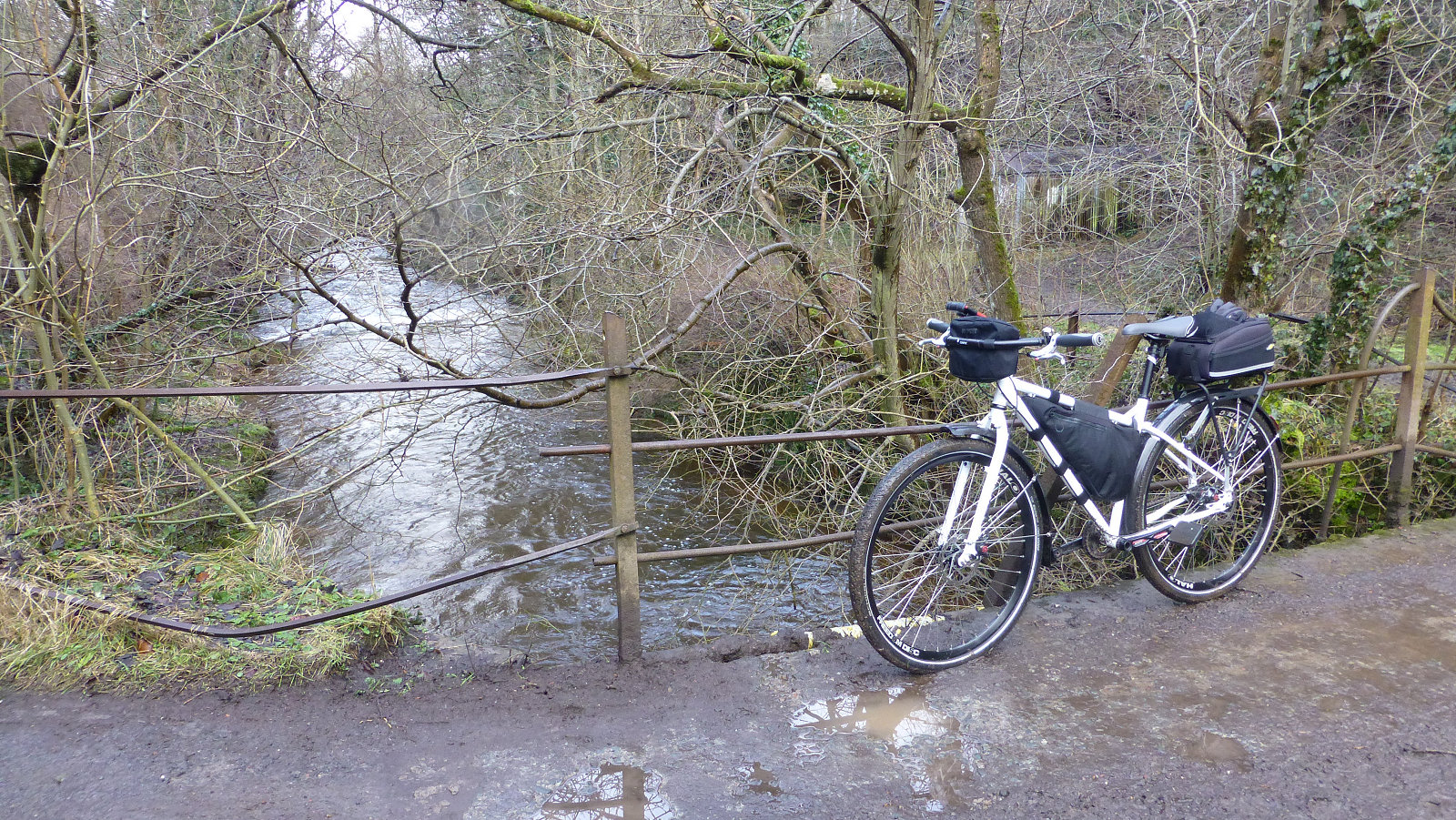 And that was it for unique zones, all the zones from here on, all the way back home were re-takes. WelfarePark and MinerMemorial were the next to be taken, both for 170 points, then down to Newtongrange Railway Station for zone Newtongrange (170 points) and to make use of the bike shelter to scoff a sandwich and a drink. It was nice to take a wee break out of the wind and light drizzle. Making my way back towards home, I picked off a bunch of zones including WhyMurderDean (170 points), NewtonsBridge, VickysGardens, Squirrelly, MatthewJenks and Cockpen, all gave 185 points. Then 170 points for Butlerfield, with a short flurry of re-visits to KirkCockpen, Brixwold and Pittendriech for a few more points.

Now, onto Westworld analysis mode. I’d been out for just over 3 hours, taking some 40 zones and upping my rank to Rank 24 – Master Seeker, always a nice surprise when the alert pops up on the phone. Zone count is 80, just 2o zones short of Greed-100 medal, so unless I lose too many zones to other players, I might just be able to take another 20 this evening and/or tomorrow morning, before the round ends. Seems a shame not to try. Points is sitting at 120,600 my best round score to date.