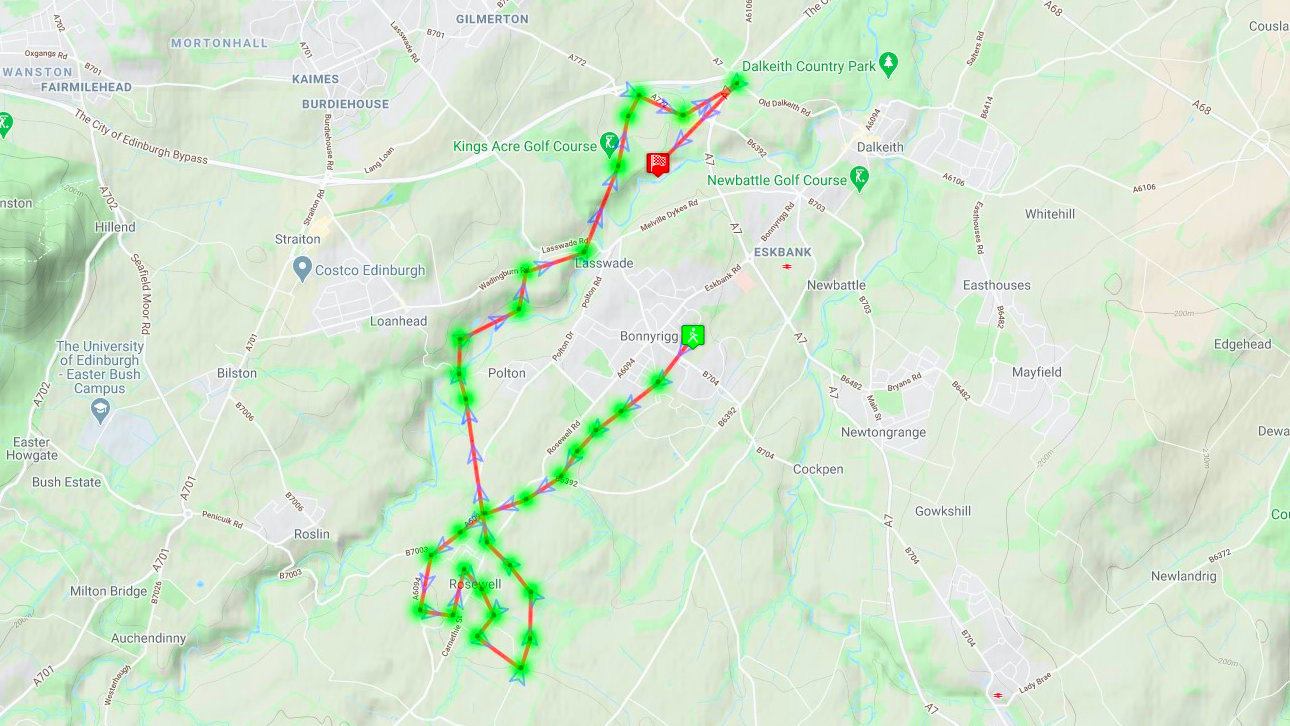 With temperatures just a few degrees above freezing and a strong lazy wind from the north west blowing right through you, it was very tempting to stay indoors in front of the telly, feet up, watching Rob Ross do his amazing paintings while sipping a cup of hot tea. Very tempting indeed. However, turfers are made of sterner stuff and do not shirk our duties when the weather gets a wee bit cold or windy, no sir! So, straight after dinner, out into the elements we went, Ogre and me. Our plan this fine evening? To take the zones first in Rosewell, then drop down into Lasswade, through Kings Acre and Melville Castle and pick up all the isolated neutral zones still there for the taking.

I’d done Rosewell enough times that’s a nice easy circuit for an evening. I think I’ve got the route about as efficient as I can. Zone ExitWhithill isn’t well placed though, being located on a dirt track that leads onto the golf course, just feels wrong somehow being there. There’s a much more interesting spot a few meters away in an old cemetery dating back to when Whitehill House was a hospital. Will probably report it as an issue and suggest it be moved.

From Rosewell, I followed the Polton Road, and turned left opposite Midfield House and joined an ancient sunken trackway known as The Cast. The track surface starts off just fine and easily rideable but the further you descend, the worst it becomes. I’d really like to have words with the idiot who suggested this one. It’s often more broken brick, fallen log and boulder strewn stream bed than trackway and very muddy even during the drier summer months. Unfortunately, the idiot who suggested this zone was me. Just avoid trying to come upstream, it’s fun enough coming down the way! Ogre wasn’t very impressed with my choice of route this evening.

This got me thinking about using a more suitable bike for this type of terrain, perhaps a mountain bike rather than my Ogre which is more suited to commuting in urban areas. But this had me recalling an organisation called the Rough Stuff Fellowship, formed by a group of enthusiastic off-road cyclists back in late 1950’s, way before mountain bikes had been invented. They used whatever bike they had, often standard touring bikes. The nearest thing to an off-road bike would have been a cyclo-cross bike, perhaps even with knobbly tyres! These guys, and gals, were hardcore cyclists and I suspect using a cyclo-cross bike would have been ungentlemanly and frowned upon.

I joined the Rough Stuff Fellowship many years ago, and enjoyed reading of their exploits on the journals they published and used my Dawes Super Galaxy, a touring bike with touring tyres, on some off-road routes down in the Borders – I lived in Selkirk at the time – with the Minchmoor route from Innerleithen to the Three Brethren and Selkirk being my favourite. It was hard, often more walk than ride and the bike took a beating, but it was jolly good fun. Felt like an adventure, something that was lessened, I feel, when mountain bikes came along. So, that’s going to be my cycling/turfing ethos from now on, following in the tyre tracks of the Rough Stuff Fellowship and use my Surly Ogre with his touring tyres for all my turfing adventures. Having said that, I do suspect when the snows fall next winter good old Pugsley the Fat Bike will get some use.

Now, on with more turfing. PoltonMill zone is an easy one, and I’ve found the quickest way to get this one to leave the bike at the metal gate beside the road bridge across the North Esk, go through the gate and over the steps, you are then in the zone, so to speak. You are only a few meters from the bike, so it should be okay. Next zone was Mavisbank. I had it in my sights but for some unknown reason failed to take it. Not even sure I stopped to take it at all. Must have been a glitch in the Matrix, or something. MavisbankHse zone was next, one of my own suggestions. It’s reached by following a dirt track around the walled garden area to the left, then up a steep gravel climb to the house itself. Now a ruin, it dates to the 1720’s and was a collaboration between Sir John Clerk of Penicuik and architect William Adam. It was destroyed by fire in 1973.

My pedalling now took me towards Lasswade, taking zone MrKevock before an awkward ascent up some well-worn steps for Wadingburn. There’s a very tight barrier to negotiate the bike through at the top. You can either lift the bike overhead or steer it on the rear wheel. The latter is the easiest but takes some practice. LasswadeKirk was next, then onwards to Kings Acre golf course for GolfWatchCCTV. To get to the next two zones, MelvillePark and WalkLasswade, both on Melville Grange farm, go around the front of the golf clubhouse, then turn right. There’s a gate through the fence, although it’s not all that obvious at first glance.

Take care at WalkLasswade, the gate can sometimes be padlocked, and the top bar has barbed wire wrapped along it. Guess someone isn’t keen on visitors, despite it being signposted as a footpath. However, there is an alternative route. From the Kings Acre side, head up the track heading south east at zone MelvillePark, through the trees, horse jumps and old railway carriage, once past the small brick ruin, go left and you will come out at some houses beside Dobbie’s Garden Centre, which also brings you to zone Entomophobia, at the butterfly place.

Final two zones of the evening were OldDalkeith at Sheriffhall roundabout and SpotTheDog at Melville Castle Hotel, both quite a lot of effort for just two zones. Then it was onto the busy A7 for a very fast easy pedal down to Bonnyrigg and home for supper. Most pleased to see my zone count at 76 and my pph at an amazing (for Bonnyrigg) +245. Long may it last.