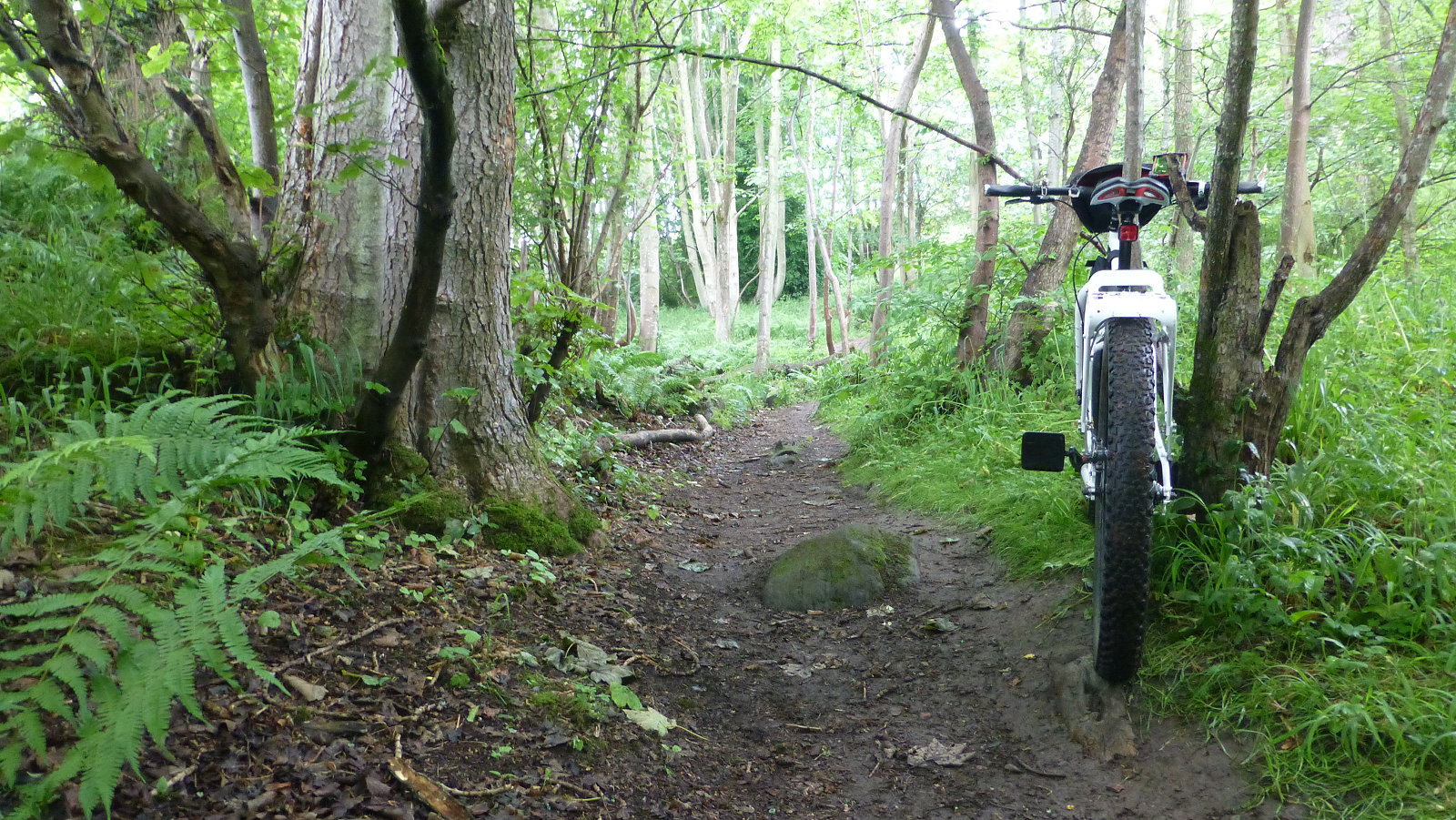 It probably seems, to the non-turfer, and perhaps ordinary turfers as well, ever-so-slightly/mostly-moderately/absolutely-totally-bonkers crazy (delete as appropriate) to head out on a bicycle at 1.00 am in the morning, spend 90 minutes or so, turfing across the countryside for only six zones. Yet that’s what this daftie did this fine morning, for just six zones taken. But to my mind it’s more than simply turfing, it’s an adventure, all be it a mini adventure at that. This kind of activity is also food for the blog pages I write, it gives purpose and keeps turfing fresh and more than just taking zones. Above all it should be fun, though it would be fair to say that the Planet Gary definition of fun might not be quite the same as in the Concise Oxford Dictionary, more Hitch Hikers Guide to the Galaxy, perhaps.

My turfing endeavours these past few days are all towards a single purpose, the Diversiest medal – taking 500 round unique zones within a single Turf round, so every take counts. And with the weather forecast for thunderstorms all day tomorrow, it seemed wise to take advantage of a forecast short dry spell this morning before the heavens open and dump their load on us all. I’m slowly working my way round all the zones local to my home in Bonnyrigg, Midlothian, and a handful of zones at and around Melville Castle Hotel were in my sights.

Having been out cycling on the Surly Krampug the previous evening, and with most of the route off-road, the Krampug was my steed of choice. The phone mount was already installed on the handlebars and I suspect one day it will break when I either install or remove it. It gets swapped between bike and kick scooter quite a lot and I don’t reckon it will last much longer. Yes, I have thought of the obvious, get one for each bike/kick scooter, however, without a phone mounted they have the most annoying rattle in the known Universe and there’s nothing worse while cycling than an annoying rattle.

You should note there is no such thing as a Surly Krampug on the Surly Bikes list, nor has there ever been one. It’s the result of me building from a bicycle from scratch using the frame and forks from a Surly Pugsley married to the wheel set from a Surly Krampus, hence the name Krampug. I think it has a nice ring to it? It’s also in keeping with Surly’s penchant for unusual bicycle names. My bicycle stable included a Pugsley and an Ogre but Surly also have Wednesday, Ice Cream truck, Troll, Karate Monkey and Midnight Special, to name but a few. Really love the last one. I must say I would like to claim fame for the name Krampug, but alas, I cannot. That honour lies with friend Bruce Mathieson, a.k.a. Coastkid, a keen fat bike rider and WWII Jeep enthusiast from East Lothian.

A quick check of the Turf app revealed I wasn’t the only daftie out turfing at Silly O’clock, there was one other, and turf royalty at that. Féarglas, the Queen of Scottish Turfers, was out turfing in Edinburgh, enjoying the warm dry weather before the rain starts. I was most humbly honoured to exchange a few brief messages on the Turf app with her royal turfness as we turfed our respective areas. Could not see another turfer anywhere in the UK. I guess we Scots/Irish turfers were created from the good stuff. Though some might say we are off our heeds!

SpotTheDog (still haven’t worked that name out) was my first stop this morning, the zone located beside Melville Castle Hotel. Cycling straight from the house, my route took me across the housing estate, down the cycleway and along a hidden grass area beside the Community Hospital., then across the A6094 Eskbank Road and up a dirt track leading towards Broomieknowe golf course. It’s on tracks like this that the big low-pressure tyres of the Krampug hold their own, smoothing out all those lumps and bumps. A far cry from the small wheels of the Swifty kick scooter or the skinny tyres on the Surly Ogre. Almost a smooth as riding on tarmac.

A nettle-filled gap at the top corner of the course led me down beside the pitch-and-putt area at Melville golf course, then across the A768 Melville Dykes Road and round the course perimeter, before dropping down through the woods to the hotel. Lots of lights and parked vehicles at the hotel these days. Not so long ago during the Covid-19 outbreak it was closed down with only caretaker staff in residence. Looks to be getting back on its feet again, which is good. Crossing the open grassy parkland at the hotel there’s a carved wooden figure. It’s a good ten feet tall, very slim and can be quite spooky at night. At first glance, you think there’s someone standing there in the dark. I’m almost certain it swivels around to watch you as you pass by. Very creepy. Probably best to give it a wide berth and don’t blink.

Entomophobia was next. Rather than take the easy and quicker tarmac route, I opted for the off-road route. Out along the hotel access road, then left along a dirt track that takes you under the A7 road bridge. Usually some interesting graffiti here. Always worth a look as it changes quite often and some of the work is very skilled. Head right at the junction and follow the track through the narrow belt of trees towards the cottages beside Dobbies garden centre. A short stretch of pavement brings you to the zone.

One thing I cannot get comfortable with when turfing at night, at certain zones, is the feeling that I shouldn’t be there at such an unusual time of day, or rather, night. Zone Entomophobia is one of these zones. First there’s the noisy squeaky gate to get through. Next you are aware of all the CCTV cameras recording your every move and security lights bursting into life. I half expected a police car on blues-and-twos to come hurting along the road, screech to a halt, followed by the cry of “POLICE OFFICER. GET ON THE GROUND NOW OR YOU WILL BE TASERED.” Or just perhaps I’m watching too many episodes of Police Interceptors and Traffic Cops?

Fortunately, nothing like the above occurred, though it would have certainly been interesting if it had. As turfers, we have a simple plausible explanation for our presence. I’m just out turfing, officer! Would be a great write-up for the blog. Oh dear, I wish I hadn’t thought of that. Now I’m thinking of ways to engineer a police encounter for the blog. Would a mobile phone with the Turf app running while riding a bicycle count as going equipped to turf? Perhaps I’m getting a bit OTT?

Sticking with my off-road route, I backtracked through the narrow belt of trees again and turned right at the old brick shed (good brickmarks can be found here, NCB ROSLIN and ROSIN NCB), then taking a track down towards Melville Grange Farm. The farm access road offered up two easy zones, MelvillePark and WalkLasswade. The same access road, in the opposite direction, takes me to Kings Acre Golf Course, and zone GolfWatchCCTV. And here again that feeling of being somewhere I shouldn’t be. Again, a squeaky gate behind the club house to get through, sounding overly loud in the quietness of the night, the usual CCTV cameras at the club house and lights on at Melville Mains across the fairway to the west. Sirens in the distance, probably on the city by-pass. I’m only out turfing, officer.

At this point, I’d reached my target for the evening, to increase the take count for the Diversiest medal from 94 to 100, so had a decision to make. Continue along to the Mavis Bank area for a few more zones, head back the way I’d just come or head straight for home through Lasswade. With my dodgy back limiting my activities at the moment and spots of rain starting to fall, I decided to head back to base. But was able to pick off another zone, LasswadeKirk, along the way, leaving my total at 101 zones with 399 to go. More daftness and overly-imaginative turf blethering soon.

P.S. I’m going to carry a little bottle of oil for those annoyingly squeaky gates!