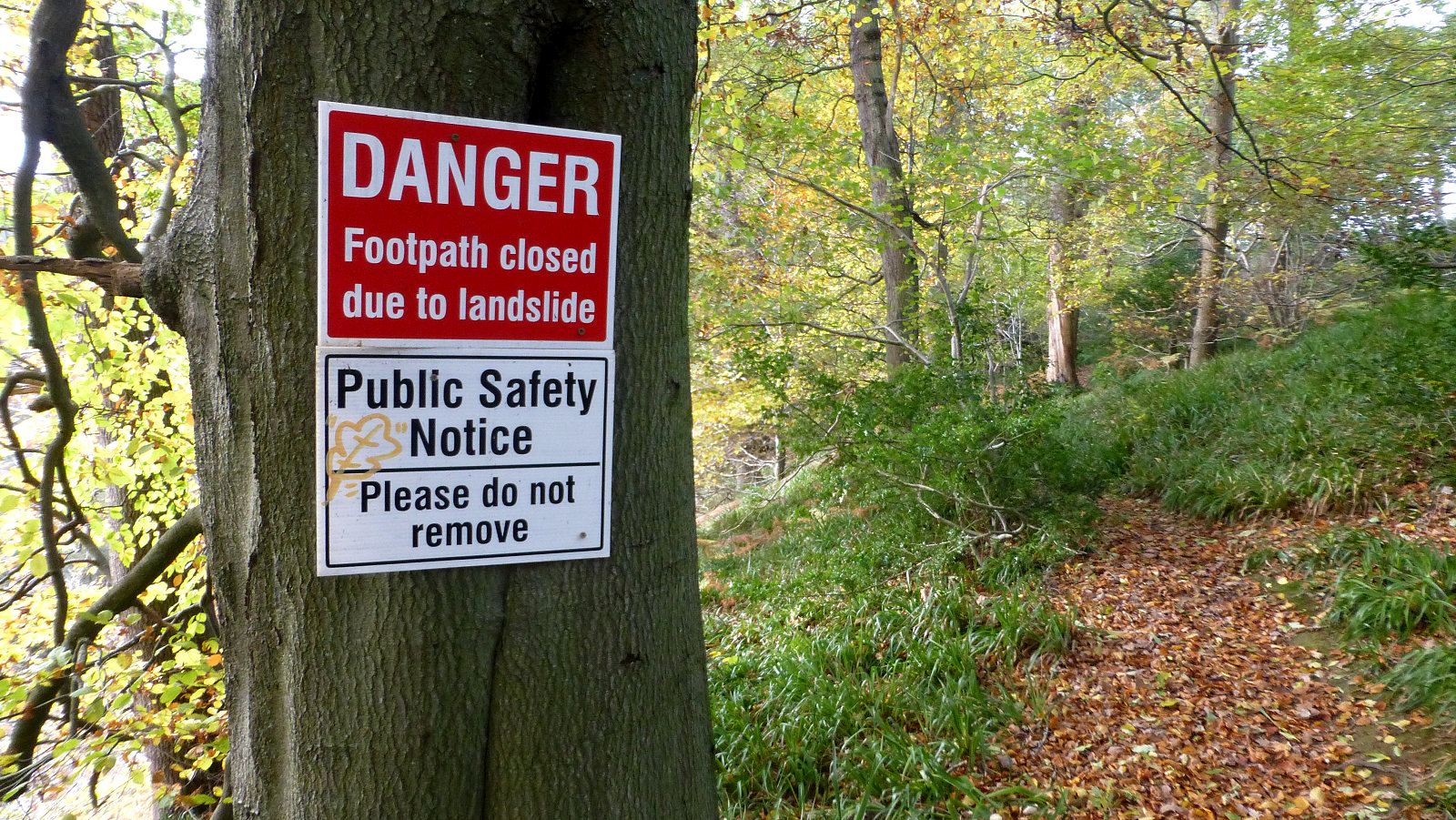 Walkies today, partly a change from cycling or kick scooting and partly due to the terrain I’m planning on visiting. That being the tricky, slippy, slidey, muddy, up and down path along the north side of the River North Esk between Roslin and Lasswade. The last time I visited these zones was during the night back in June, with the Swifty Air kick scooter, and I want to see what the place looks like during daylight. And hopefully, no angry young badgers this time!

Starting from home in Bonnyrigg the route is around 10 miles overall. It would be quicker on the bicycle or kick scooter but I wanted a more relaxed outing today, one that gave me more time to see what was going on and enjoy the autumn scenery. And I didn’t want to be lugging either bicycle or kick scooter up and down steep slopes, across fallen trees and along muddy stretches of path. The walk up through Bonnyrigg and along the cycle path to Rosewell, gave me 12 easy zones. And I must say that taking zone AuldCoal was the first highlight of the morning. Up pops the Daily-60 medal alert. Yes, another medal in the bag.

Leaving Rosewell I had two route options. Either continue along the Penicuik to Dalkeith cycleway and drop down via the old gunpowder mill or follow the B7003 down through Roslin Glen. Today, I chose the latter, even if that meant a few takes less. The road passes through the Roslin Glen Nature Reserve, managed by the Scottish Wildlife Trust. I wanted to have a good look at the woodland and see if there were any footpaths to follow. And yes there was, but will be exploring them another day.

The next zone on my list was RoslinPark, located near the parking area. But before that I had a quick look over the road bridge. I suspected the gravel beds here might provide some interesting sand and sandstone for the collection, as well as a few bricks that might be worth investigating for unusual brickmarks. Yes, on both counts but again, a visit for another day. The trouble with sand collecting is that you soon end up with 20 or 30 samples, adding kilograms to the rucksack and carrying them the next 6 miles is hard work. I’ll be back with the Surly Ogre bicycle to carry the load.

Then it was across the river and up the path towards the castle. There’s no need to actually go up to the entrance road to the castle, you can take zone RosslynCastle from below the archway. I was now following the footpath downstream. And a poor path it is here. Lots of muddy patches, though a few with duckboards crossing the worst areas. The path to the next zone NorthEskWay, is closed due to a large landslide, though the large sign that used to be here has vanished. However, the landslide is actually after the zone so easy enough to reach. Just be careful on the path as its narrow, twists and turns, and it’s a fair drop to the river if you slip. Which would either end in splash or splat depending on the state of the river. More likely splat, to be honest. The rocks are also slippery with wet leaves and algae, no doubt due to less frequent use by visitors.

Due to the landslide, you need to return back up the path again for the next zone, GoingNorth. However, I have heard you can actually cross the site of the landslide but I would not recommend doing so. I’ve been to a few landslides in the past collecting sand samples and some areas can be like quicksand. Not always easy to spot at the best of times, and a carpet of fallen leaves makes it doubly difficult. The warning signs are there for a reason. Having said that I’m something of a Dennis the Menace when it comes to ignoring them.

Lots of duckboards along the next section of the trail and I’m so pleased I don’t have the bicycle with me. The boards are scaffolding boards, about 225 mm wide, if I recall correctly, quite a challenge when ridden on a bicycle. Too narrow to push beside you, so you either ride and risk a tumble or carry on your shoulder. It was hard enough with the kick scooter on my nocturnal visit last June. If you do slip off the duckboards the waterlogged swampy ground is knee deep and very smelly. I speak from experience.

To reach zone GoingNorth, I turned right at the warning sign (above) and again, the zone is reached before the landslide, so easy enough. Of course, when you go down you need to come up again. Then it was off along the path, gradually losing height until back at the river. Zone Fordcrossing was much easier to take this time round. Previously it was further up the small stream but has been relocated at my request into the footpath. More climbing again, up the steps, through gates and along muddy paths, but rewarded with zone HewanWood, before short drop back down again to the river at Polton Cottages and zone PoltonMill.

I now followed the river downstream but first a wee diversion from turfing and into the mysterious world of sand collecting. Knowing the river had been in spate recently following heavy rains, I was on the lookout for freshly deposited patches of sand. Not far from the bridge I spotted a likely patch and was able to collect three samples from the same small beach, each sample graded differently by the action of the flowing water with course sand upstream, then medium sand, and then fine sand downstream. All within a few meters of beach. A nice addition to the 800 or so I already have in the collection. Okay, a daft hobby I know, but I don’t do normal.

Between here and Lasswade I was able to take another five zones – MavisbankHse, Mavisbank, MrKevock, Wadingburn and LasswadeKirk. Met an elderly woman with an unusual assortment of dogs. One dog she stated was blind in one eye, another was totally deaf and another was partially blind and had doggy dementia. The other four dogs appeared normal but who knows? As I climbed up the Wee Brae, it started to rain, light at first then soon getting heavier. On with the waterproofs.

Back in Bonnyrigg and a couple of chores to do. First one was to collect a prescription at the health centre. And that involved waiting outside in the rain for 30 minutes. Seems that the chemists are down five staff members due to Covid-19 so queuing times are long and two-meter spacing means long queues. Quite a few grumpy people in the queue and a few not wearing masks. Next, along to the Co-op for some bread as we were down to two slices left, some chunky Kit-Kats (but don’t tell Cathryn) and then home to make the dinner. A grand day out and the best thing about the day was the autumn colours. Quite amazing when the sun was shining.

Meant to mention this earlier. As is my norm before turfing, I check the turf app for turfer activity. Very quiet other than Féarglas, who I noticed has been out turfing since around 6.00 pm yesterday. I later checked on Frut and her turfing session lasted some 22 hours with barely a break. She is pure machine, and shall henceforth and for all time, be known as …the Turfinator. Which reminds me of something.

The Turfinator (1984), directed by James Cameron.

“Listen. Understand. The Turfinator is out there. It can’t be reasoned with, it can’t be bargained with…it doesn’t feel pain or tiredness or fear…it does not sleep or eat…and it absolutely will not stop. Ever. Until it has taken all the zones.”