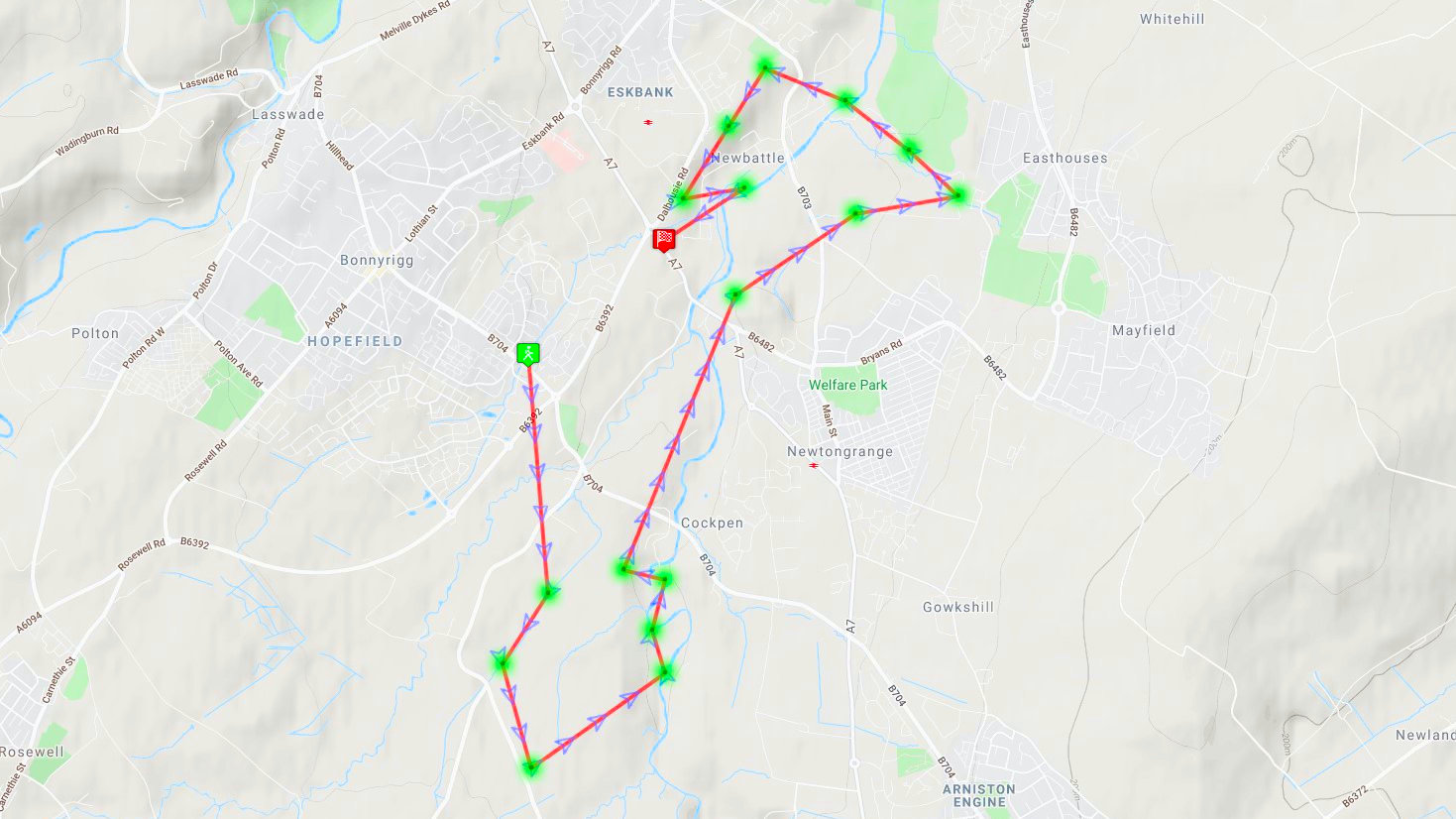 I decided on some easy local turfing this Saturday, rather than venturing further away in search of uniques, which was what I was thinking of doing yesterday – would probably have cycled out to the Penicuik and Bush areas. There’s a dozen or so zones off-road locally that tend not to get visited as often, no doubt as some are awkward to get to and turfers sometimes like the easy options. Many of the zones around Dalhousie Castle and Newbattle Abbey are good examples and that’s exactly where we are heading today.

Normally, I’d dig out the Surly Krampug, or even the Surly Pugsley, for this type of terrain, their big soft tyres making for plenty of grip and comfort, but having announced I was keeping to the principles of the Rough Stuff Fellowship, namely using a normal bike for all conditions, the Surly Ogre was my steed for this slightly more adventurous zone bagging session. 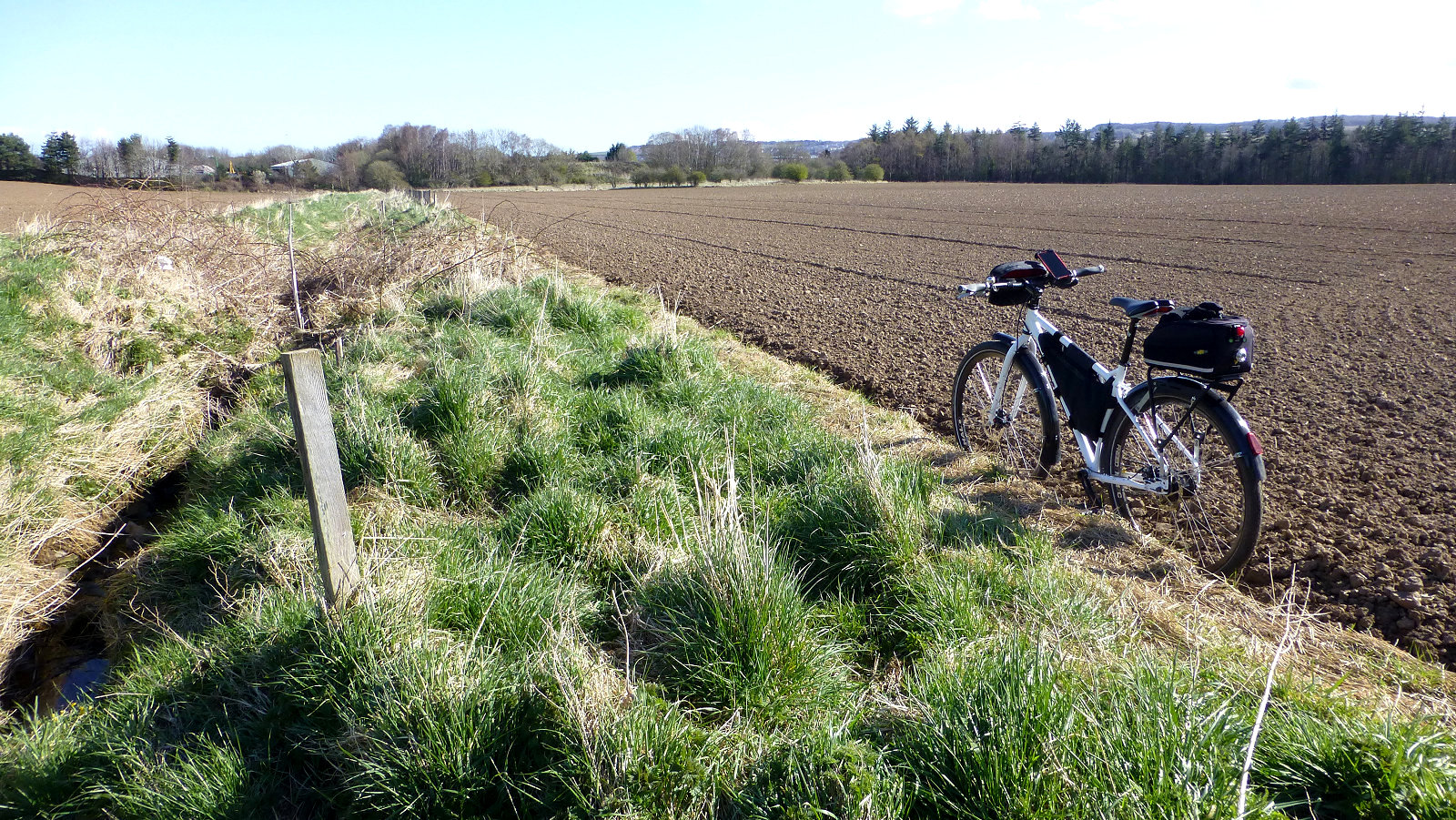 First target zone was UpperDalPath, surprisingly still a neutral, even six days into a new round. My approach was from the Bonnyrigg to Carrington road. About 500 meters after you pass Dalhousie Business Park, opposite the entrance to the fields on the right, there’s a secret wee path through the trees. It’s just about rideable, if you don’t mind some bicycle trials style riding that involves ducking and diving between saplings and tree branches, and also having to battle with some serious shin-ripping brambles, and brings you out at the long shelter belt of conifers that will take you straight down to the zone. Unfortunately, the track is covered in evil tractor tyre corrugations which makes for a very shoogly teeth-chattering ride. 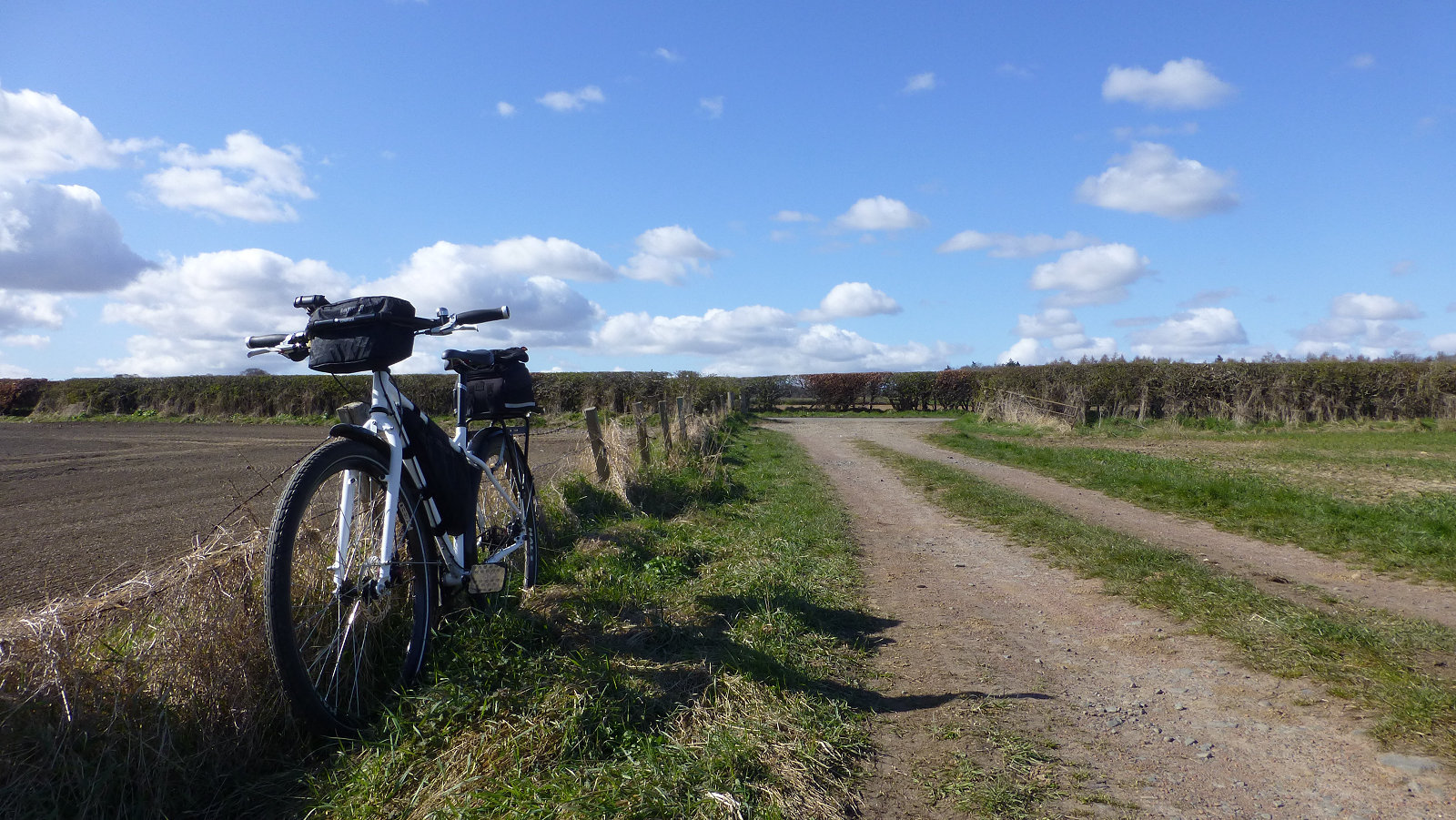 From UpperDalPath, the next zone was nearby zone DalhousiePath. This one is also located on the boundary between fields and is most definitely not an easy cycle in Spring when the crops have been sewn. Easy after the harvest but not today. It was easier to walk and push the bike than attempt cycling – they are also known as push bikes after all. Next in line for taking was WatchTheMud. A quick pedal along the tarmac road and left down a farm track makes this one an easy take – no mud today as everything was nice and dry.

We then the continue in the same direction for SouthEskAside with MillHolm after that, both still neutrals and with 50 bonus points apiece. WitchesHouse, a folly in the parklands of Dalhousie Castle, was a revisit, as was DeanWoodTurn. I had intended to take DeanWoodPath, also a neutral, but I missed it, probably due to sometimes finding it difficult to differentiate between the yellow and green zone symbols on the phone screen in bright sunlight. 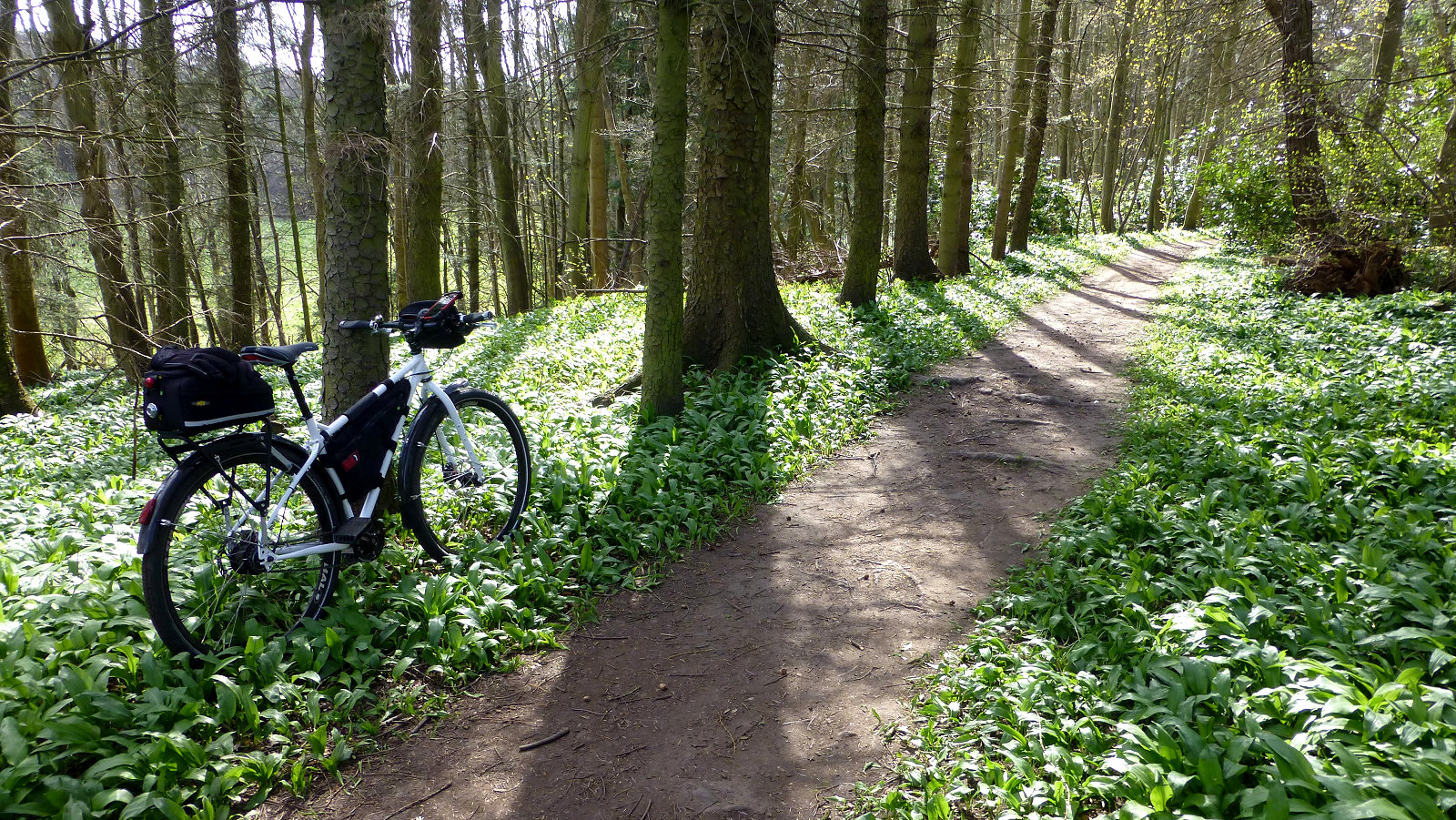 Now finished with the Dalhousie area, the woodland surrounding Newbattle Abbey was next. My route was normally have been via Grove Farm, grabbing a couple of revisits on the way, but Cathryn and myself walked there a few days ago and the local farmer had been using a muck-spreader to throw manure into the surrounding fields. Quite a lot of this rather smelly stuff had made its way onto the footpath, then onto our shoes. It took ages to clean off and get rid of the smell. I didn’t want the same carry on with Ogre’s tyres, so followed the main road to the Sun Inn and joined Lady Lothian’s Walk.

On my last visit here, it was so muddy underfoot, I’d had to stop frequently to remove mud, sticks and leaves from the tyres to allow them to run freely. No such chores today, the paths were almost bone dry and while rough in places made for some easy fast turfing. I picked off TheRedWoods, TheSouthPath, Mary and the TheNorthPath, before stopping at zone BattleAbbey for a picnic lunch – there’s some handy benches in the gardens behind the main building. 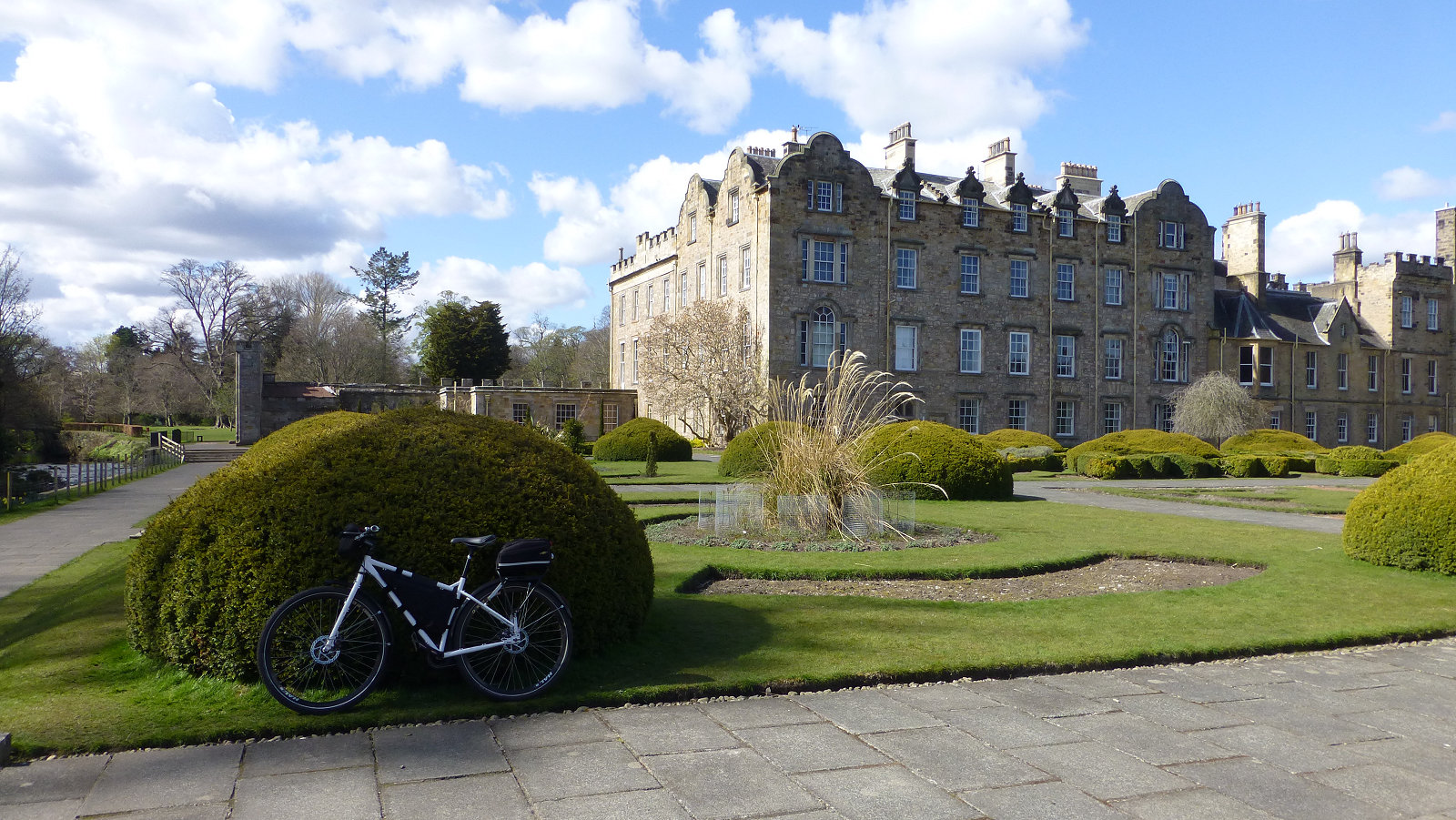 Now fully fuelled and raring to go, and to get warmed up again, my return home took me through Kick Bank wood, taking zones Newbattle, RecentBattle, OldBattle, AncientBattle down by the river and finally, StoneGate beside the A7 road. Overall 18 zones taken in around 2 hours which is not exactly very good going. But sometimes it’s nice to get away from busy urban streets and out into the countryside. And to finish, points for the round so far, 66,900 which I’m quite pleased with, this being only 6 days into the round. Oh, I almost forgot, five noisy chattering jays flew in directly above me at zone DeanWoodTurn, which really made my day. Normally they are very elusive.