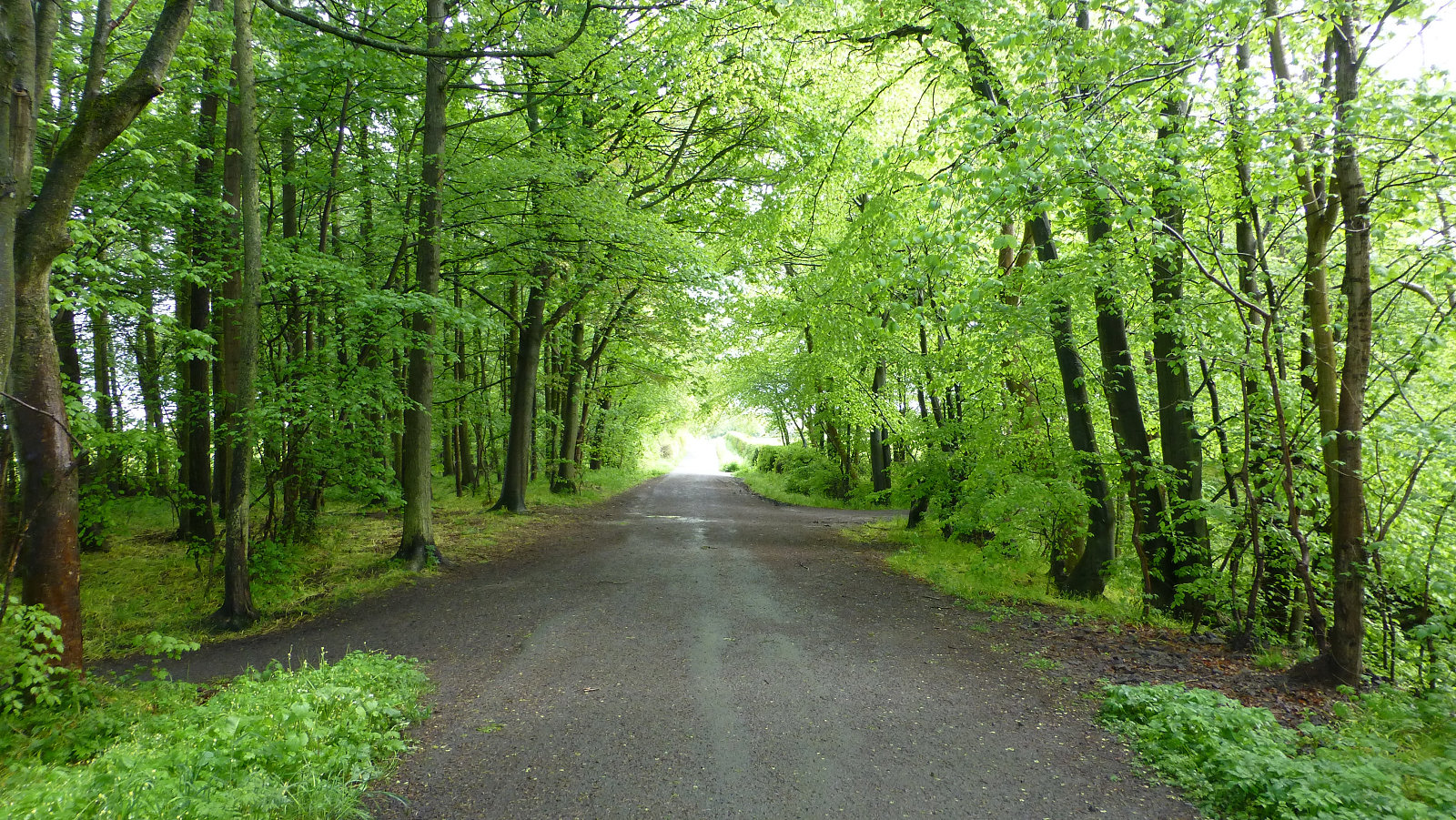 With the chance of good fat-biking snow rapidly receding as we work our way through April, it seems sensible to transform Pugsley from full winter fat bike mode to light semi-fat summer mode. This simply involves swapping the big fat 100 mm wheelset for a lighter 75 mm wheelset. In effect Pugsley becomes Krampug. Okay, what’s a Krampug, you might well ask?

Okay, in short. Surly Bikes produce a bicycle called the Surly Pugsley, a fat bike, and they also produce a bike called the Surly Krampus, named after the alpine Christmas figure who scares children who misbehave. The Krampug is a Pugsley fitted with the wheelset from the Krampus. With me so far? Good, that’s all there is to it. I built the Krampus as a general purpose so-called “gravel” bike, mostly for forest access roads and the like. It offers a good degree of comfort on loose gravel yet is far easier to cycle than the Pugsley.

For my Daily-Five my destination today was Rosewell, not only for the zones but I also wanted to see what was happening at the sand quarry, as I’ve not been there since the start of Covid. As you may be aware I like all things associated with sand. The sand exposures in the quarry were laid down when the ice retreated at the end of the last Ice Age. I also wanted to check out some of the woodland areas for possible goblin photography.

First zone of the day was WayOfBaird for a revisit. I don’t usually seek out zones that only offer half points but will take them when passing. Then it was onto the Dalkeith to Penicuik cycle path for WaverleyPath, SignsOfHumans and RobinAndTuck, revisit at Skeltiemuir, then takeovers at CockpenBypass, BonnyriggPath, HopeBridge, SandQuarry and ExitRosewell. Cycling uphill along the cycle path it was quite obvious that more effort was required to pedal the Krampug than the skinny Surly Ogre. But it’s all a compromise. Skinny is better on road but not so good off road. Fatter tyres are harder on road but better off road. Popping into Rosewell gave me HolyStMatthew, then a fast run along the entrance road to Whitehill House offered up zones EnterWhitehill and WhitehillGolf. Next a short break from turfing, as I backtracked to zone EnterWhitehill and hung a right through the woods towards Park Neuk cottage.

Interesting to note that the trail here is now almost two meters wide in places. Prior to Covid 19 it was less than half that. All down to increased foot, bicycle and horse traffic. The path at Park Neuk cottage has been rerouted. Originally it passed in front of the cottage but now follows the edge of the field. But at least the new path has hard core laid down. I laughed when I saw what they’d done on the old track. It looks like some trees have been coppiced but they look at least ten years old. They are actually branches sunk into the ground to look like an established garden. I wonder what is actually legal here, Rights of Way and all that stuff?

Onwards to the sand quarry to see that the quarry hasn’t increased much in size but is noticeably deeper. There must be at least 12 meters of sand visible, all laid down after the last Ice Age. You can see the bedding planes and darker bands where coal has been washed out and deposited. I used to enjoy coming here in the Pugsley and riding about on the sand but they spoiled that by installing CCTV cameras all over the place. They are connected directly to a security firm that alerts the quarry staff if anyone enters the quarry. Health and safety, I suppose.

Back to turfing. I now followed what was once a navigable-by-car road south to Shiel Bridge, heading for zone NoHorseFires. The increase in foot traffic has resulted in considerable erosion on both side of the bridge. I used to be able to cycle up the hill here but now a 400 mm deep trench is too narrow to pedal and you have to get off and walk. No problem really, it was a very difficult section to cycle anyway. NoHorseFires was soon reached and taken, then followed an easy circuit of Rosewell, taking all the usual suspects, around nine overall, then back down the cycle path to Bonnyrigg and a few revisits along the way.