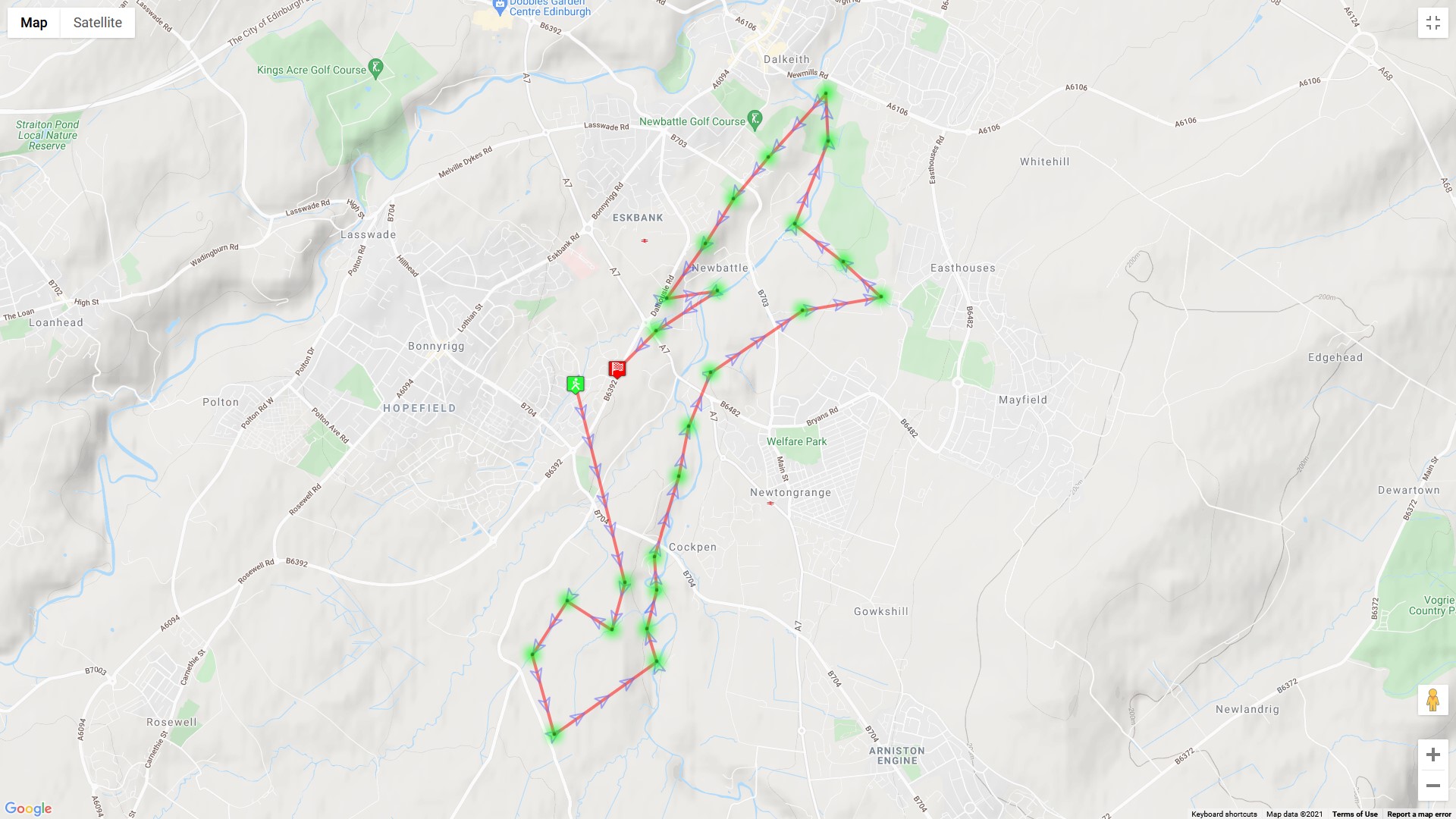 Having lost much of my enthusiasm for turfing over the past couple of weeks, I was in desperate, nay dire need, of something to get me back into the turf zone, if you will excuse the pun. I needed an exciting turfing session that would enthuse me to carry on turfing. Pause. I like the sound of that “Carry on Turfing”. Sounds like a comedy film from the 60’s and 70’s. I can just imagine Sid James and the gang doing their whacky stuff, or rather Féarglas, Hodge, SparseRunner, Cruachan and the rest of the local turf crew. I’ll start writing the script. Good title for a Blog site on Turfing as well.

Anyway, back to the Real. I decided I wanted a good hard physical turfing session, one that would also offer a good write up for the blog and not the usual quick blast around the local zones, yet again. So, I scanned the turf map and noted that a few of the less easy to reach zones around Dalhousie Castle were still hanging determinedly onto their unique status. Add on the other zones nearby and include a run around Newbattle Abbey woods via Grove Farm and I’ve a nice off-road turfing run. And just to spice things up with some added daftness, I’d use the Swifty Air kick scooter rather than the Ogre bicycle and start at 12.00 midnight, for a night run. A plan was born.

Twenty minutes past the Witching hour, my first zone of the night/morning (never sure which one applies, or is it either?) was Pittendreich, just a revisit but it got me started. Zone Brixwold should have been the same but for some unknown reason failed to do anything despite me having taken the zone four days previously. Next zone on the passing was Cockpen but was still blocked to me, being less than 23 hours since I last visited. I like this spot. There’s a couple of benches on the south side of the church that are a good place to stop and chill if out at night.

Now, you might wonder why go turfing at night? Just plain crazy, right? Well, I guess that’s a personal opinion. Some people stay tucked up in bed, others, like myself, want to experience the world differently. I think the best thing is the peace and quiet. Other than a few passing hire cars and some late-night travellers getting off the No 31 at Brixwold Bank just after midnight, that was about it during the three hours I was out. Saw one person walking along Newbattle Road around 2:30 am but no tame-wolf walkers, no speeding velocipedists, no grumpy equestrian riders, and no turfers either. Just me and the Swifty Air. And you don’t need to bother about getting frazzled by the sun as you would during the day.

From Cockpen church, a short stretch of the B706 pavement and it was into the grounds of Dalhousie Castle. Access is via some stone steps at an old walled-up estate entrance. Much easier lifting the scooter across than the bike. There used to be a lodge house here in the olden days but now long demolished. You can see evidence of the lodge house to the south-east side of the gateway.

The path here to zone DeanWoodTurn is becoming very overgrown, particularly with the reduction in foot traffic following the lifting of Covid-19 restrictions. In the early days of lockdown, the path was well trodden but not so much today. I recall when we moved to Bonnyrigg from Peebles, back in 2003, this track was wide enough for a vehicle but now it’s barely passible at this time of year. The main issue is stinging nettles, and also brambles and thorny dog rose stems. And I was wearing short running shorts! Tried following the tractor tram lines in the adjacent field but the tractor-tyre corrugations were worse than Edinburgh cobbles, so I reverted back to the path. Only got stung about three times. It’s still itchy this morning.

Zone DeanWoodTurn was next to fall and an easy take. The route now follows the Castle Dean Burn upstream. The trail today was almost bone dry, a pleasant change from its usual state of glutinous mud and slippery tree roots, so scoot-able in most places. Not a breath of wind in the trees, so I was soon sweating buckets. The next zone, DeanWoodPath, is located off to the left on an old stone bridge across the burn. The next two zones, UpperDalPath and DalhousiePath are next on the take-list. Not so easy to reach these ones. Both are located at the edge of fields, both sown with crops. There are paths of a sort along the field boundary but no easy cycling or kick scooting.

It was lovely to take the tarmac road for zone WatchTheMud. So smooth and quiet after the rough field boundaries. Also a delight not to have any traffic whatsoever and get the road to myself. Not much star gazing tonight as the sky is overcast but the low clouds reflect the street lights so helpful for seeing the way. An easy downhill, over a locked gate and through a field of cows brought me to SouthEskAside, another easy take beside the River South Esk, just below the old oak tree. A small point of note here, keep an eye out for cow-pats. You have been warned.

My journey now turned downstream, following a good smooth trail along the river. The night was very mild, around 14 Degrees and I was down to just shorts, having stashed the t-shirt on the Swifty. I must have been an interesting sight to behold. An almost 60-year-old bloke in bright green running shorts and Keen river sandals, riding an adult kick scooter through the woods at night, bathing in the glow of the mobile phone screen. No wonder I never saw any wildlife tonight. All I heard was them scampering hastily away into the dark as I approached.

After zone MillHolm, some short climbs had me sweating heavily again and I was very tempted to loose even the shorts. Nothing in the way of a breeze to cool me until I emerged into the open field below Dalhousie Castle, looking quite majestic in the floodlights. Lots of internal lights still on but no activity. Zone WitchesHouse is an old folly at a bend in the river. No witches abroad this evening, thankfully. Joining the tarmac path took me past the hotel, grabbing zone Dalhousie on the way. Heard some unusual hoots from an unknown owl, probably from the bird of prey centre. With all the zones in the Dalhousie area now taken, my scoot took me past Grove farm, taking zones GroveFarm and ByEskWeir, before emerging at the Newtongrange viaduct opposite the Sun Inn. I now started the second part of my turfing adventure, Newbattle woods.

I followed the Lady Lothian woodland trail, taking a series of zones including TheRedWoods, TheSouthPath, Mary and TheNorthPath with a stop at the abbey gardens for zone BattleAbbey and a welcome break for a drink. The paths here were also nice and dry, though rough in places from both foot and bicycle traffic, the dried out mud preserving the fossil imprints of walkers and bicycle turfers. Still all very quiet and peaceful and nice to still have the place to myself. The riverside path took me down to the Maiden bridge and zone SouthEsk, with a quick tarmac scoot across the park for zone Peppermint. Then it was back the same way and towards town for zone BattleForest. I’ve recently suggested this zone be relocated to the footpath rather than in the dense woodland. Myself, and others, often find getting a GPS fix here a real problem.

Final leg of the night now, the three zones in Kirk Bank wood, Newbattle, RecentBattle, and OldBattle, with AncientBattle down by the river and a final zone StoneGate just before the A7 road. First two were fine and OldBattle is now easier to take having been relocated a little to the north-west. Now found on a short path heading north towards the road, or your right if heading downhill. No more tripping over fallen branches in the dark. Thanks to the zone makers for acting on my suggestion.

It might seem odd to many to go turfing in the wee small hours rather than during the day. But I wanted something different, something with more added fun-factor and I’m more than pleased that I achieved just that. So, why not try a night turf yourself? Even better get yourself a Swifty kick scooter and you will understand where I’m coming from. Kick scooting take a lot more effort than you might imagine and you get a whole-body work-out to boot.

But do I find myself suitably enthused? Yes, I am now suitably enthused to carry on turfing and while these balmy nights last, I have a number of night scoots in the planning. Next trip might well be the River North Esk at Roslin Castle. There’s a handful of unique zones I want to tick off in the area including the Wallace’s cave. Perfect for a night scoot. More coming soon.