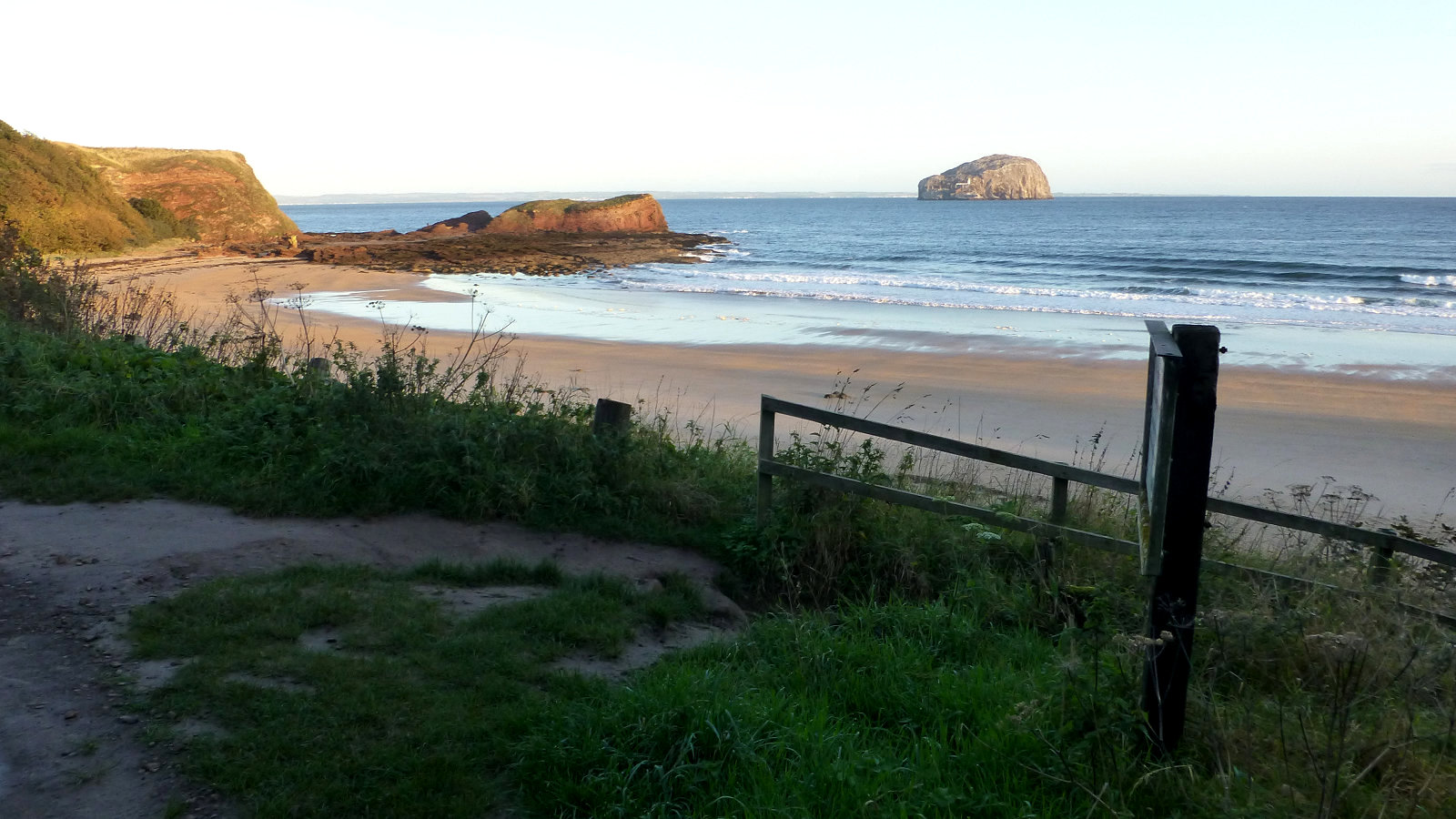 In the HBO TV series Westworld, a main character Dolores, ably acted by Evan Rachel Wood, plays the role of a “host”, an artificially created being, like the Nexus-6 android Replicants in Blade Runner. On various occasions she speaks a well-known line. That line is “Have you ever seen anything so full of splendour?”. Today, standing on the shores of the Firth of Forth at Horseshoe Bay, these are the words that come to mind.

I’m never disappointed when I visit the East Lothian coast. No matter what the weather, be it horizontal torrential rain, fat biking during a howling blizzard or the all too rare scorchio days of summer, I always find delight at being here. Today was no exception. The weather was fair and dry, though slightly on the Autumnal side of cool, the skies were clear azure blue with only a few high cirrus clouds to suggest it would be raining tomorrow. And I was turfing the zones between North Berwick and Seacliff. The scenery was amazing. It was a fantastic place to be and we are so lucky that we have this and best of all it’s free. 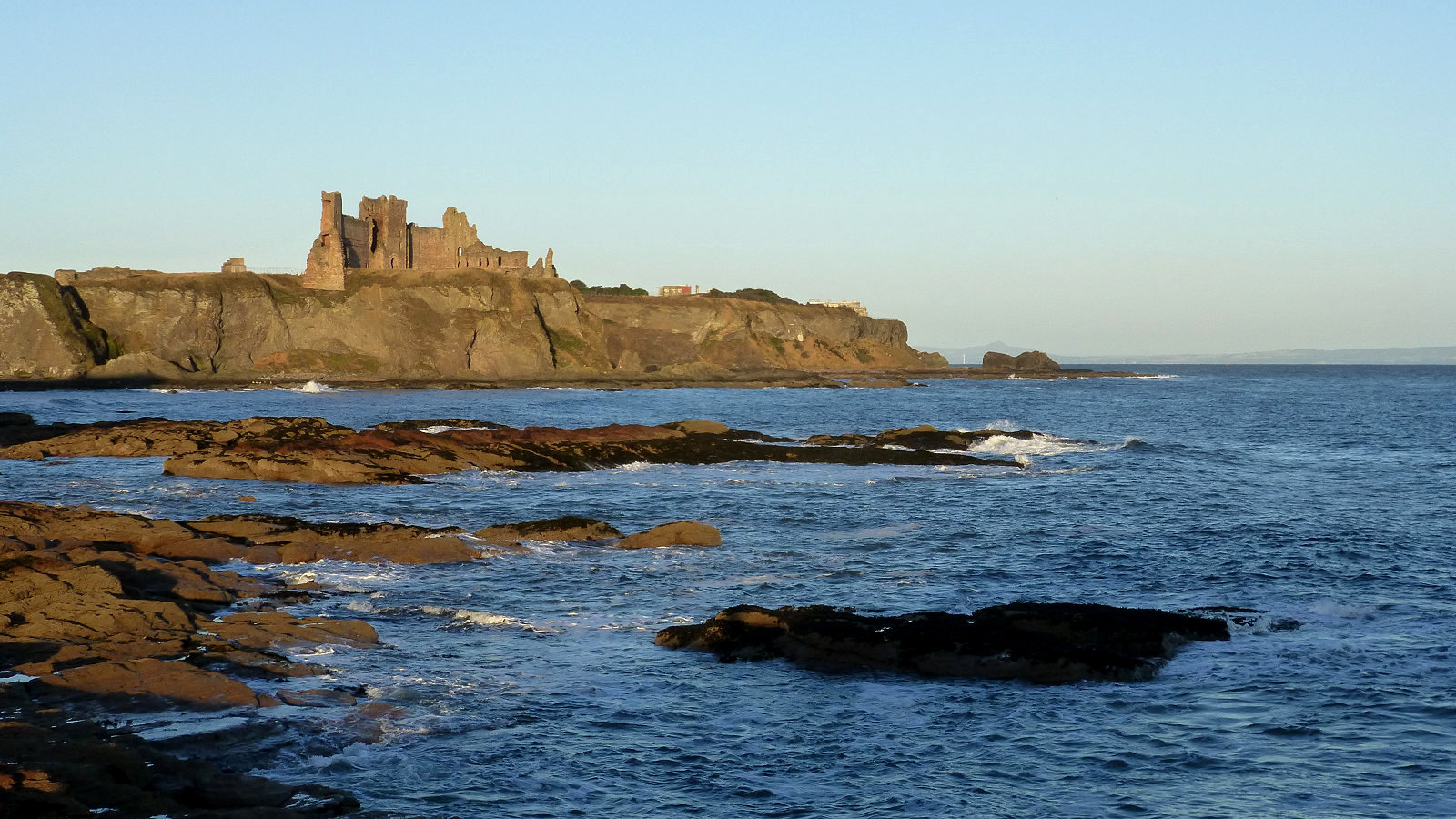 I’d arrived fairly early, the back of 8.00 am, while the sun was still low in the dawn sky. I wanted to catch the low sun at Seacliff for some interesting zone photography. After paying the £3.00 entrance fee at the coin-operated barrier, which I do not grudge paying, I stopped at the parking area, which was immediately beside zone SeacliffSteps. Taking the zone was very challenging as I had to walk at least five paces from the car. Thankfully, I was able to rest halfway there before finally taking the zone. I hoped all the zones I planned to take this morning would not be so difficult.

You might be interested to know that the small cave beside the parking area is known as St. Baldred’s Cave, named after St. Baldred, a Northumbrian monk of the 8th century, though I prefer to think of the scruffy serf Baldred, played by Tony Robinson, from the Blackadder TV series. At least that’s the image that comes to mind when I see the name Baldred. The entry on Canmore, the online database from Historic Environment Scotland, makes for some quite interesting reading, with mention of possible human sacrifice. 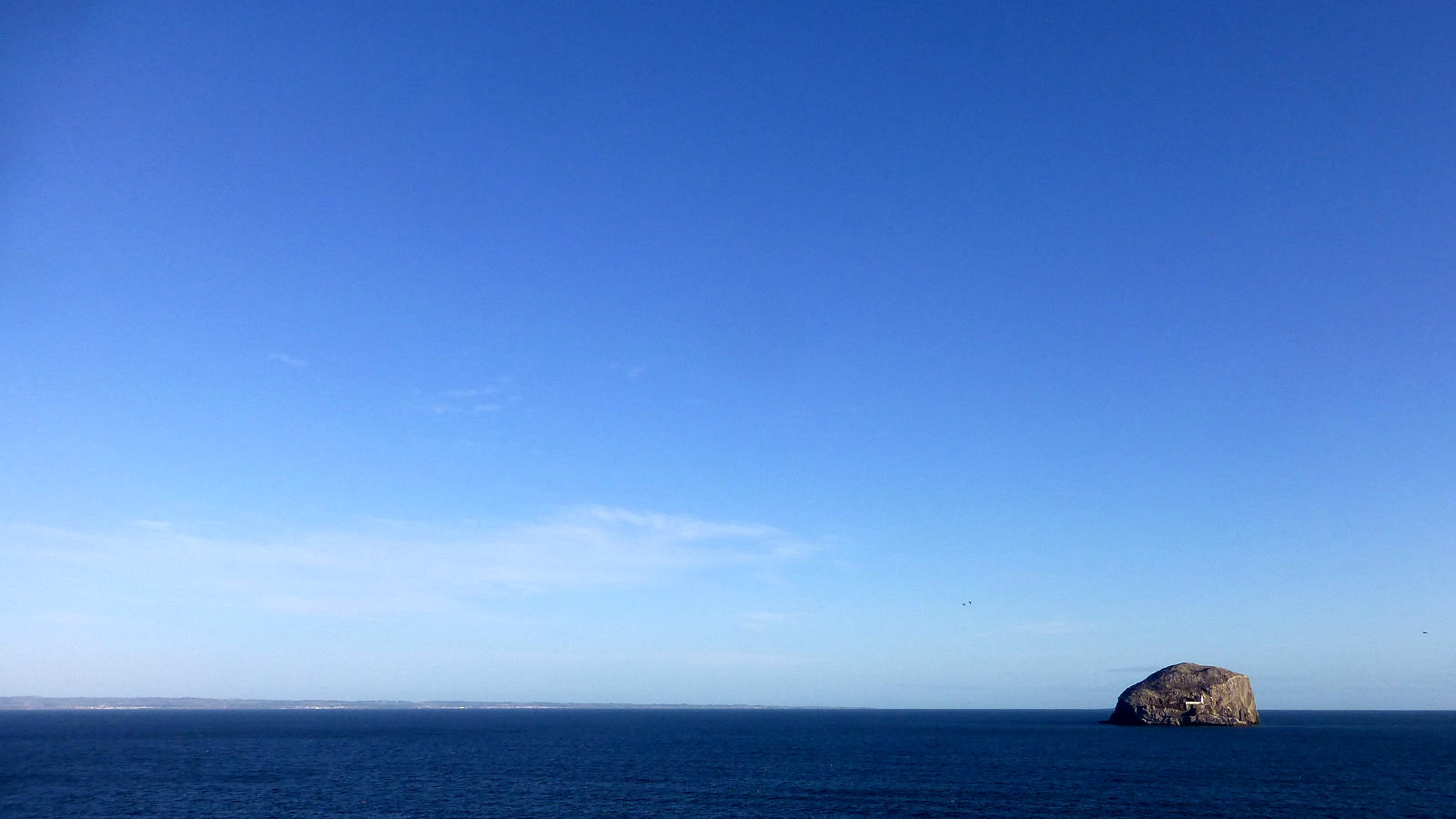 Some slippery timber steps led me down to the beach and the short walk along the beach leads to zone TinyHarbour. The zone’s located at the smallest harbour in the UK and was constructed in 1890 by Andrew Laidlay, the then laird of Seacliff House. Personally, having a keen interest in geology and place names, I would change the zone name to TheGegan or GeganRock, from the rocky outcrop immediately beside the harbour. Sounds a bit more interesting and mysterious but that’s just me.

From here I followed the access track that serves the wee harbour and walked out the access road I driven along earlier. I was now heading the next zone on the list, OxroadBay. Coming across a galvanised steel gate and not bothering to look and see if it was actually locked or not, I climbed across only to find both myself and gate swinging open. Guess I should have checked first! A grass track led me along to the zone, my boots getting quite wet from the thick vegetation. I didn’t go down fully into Oxroad Bay as the tide was rising. I have been down in the past both for sand collecting and brick spotting. You can also walk right round the foot of Tantallon Castle, under Gin Head and into Canty Bay. Can be quite slippery underfoot. My friend has ridden his Surly Pugsley fat bike this route but he’s braver/younger/dafter than I am. Sorry Bruce, I should say, least he read this blog, more technically proficient than I am. 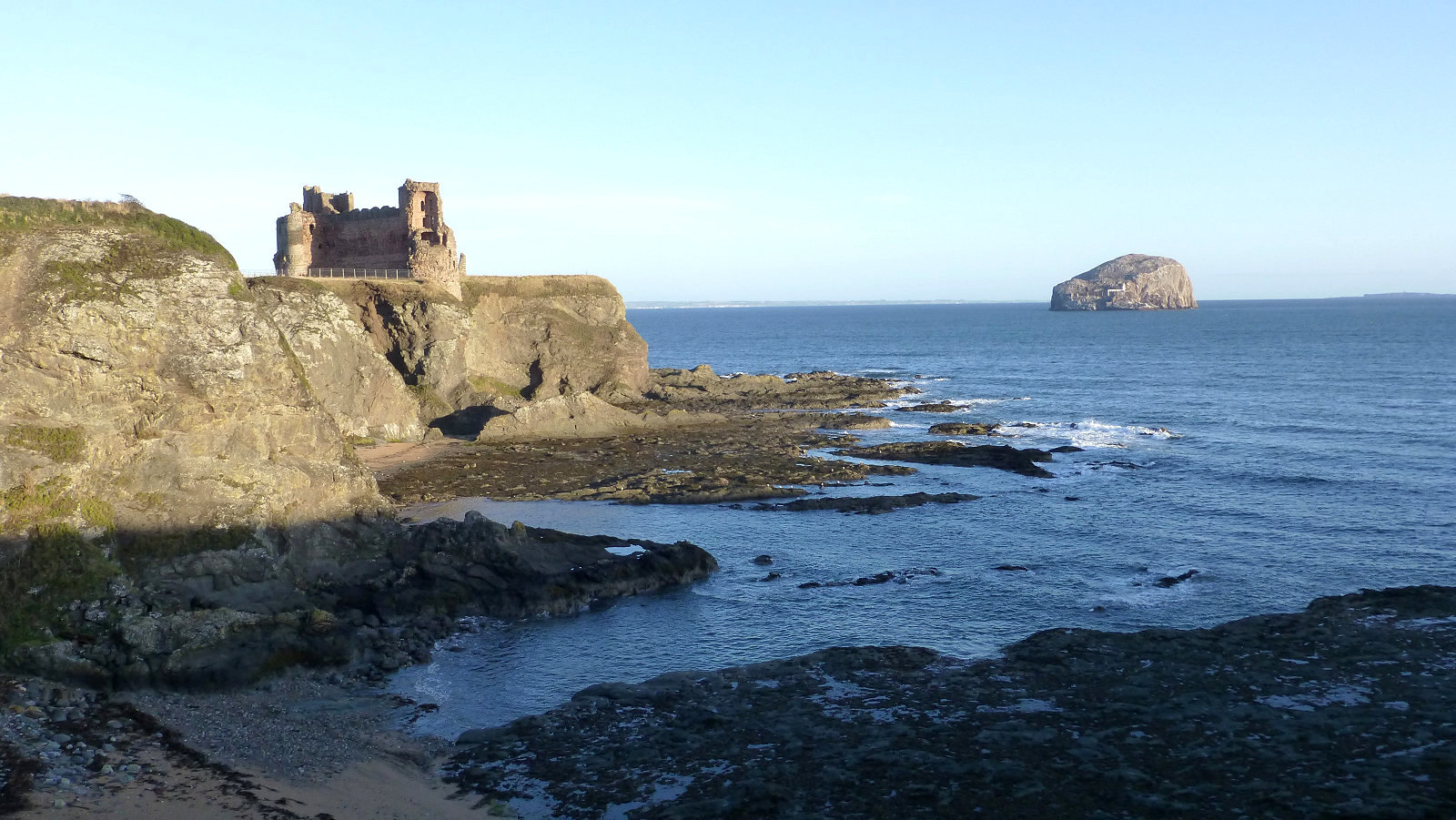 Next back to the car and the short drive to Tantallon Castle. Unfortunately, the castle is closed to the public due to the risk of falling masonry, which was a shame, though I guess a sandstone block on the head might spoil the day. The grounds were open and as a member I was tempted to ask if I could nip into the castle and take the zone but decided to leave it for another day. No doubt it will be open again eventually. I left the car in the parking area and walked along the busy A198 towards Castleton farm, hugging the narrow grass strip to avoid becoming road-kill. There, an access road leads you to Gin Head, a former WWII radar research and development station and latterly used by a private defence contractor. Today it’s been sold for private housing. Fine if you’ve got £2.5 million spare under the bed. Wish I had!

The zone I’m heading for, reached by following the field boundary on the left, is GinHead, which can be taken this side of the stone wall. The next two zones, DrinkAnyone and CantyBay, are down in Canty Bay. Rather than walk back out along the road I opted for the adventure route, scrambling down the 50m or so off tussock grass slope and onto the shore. With the tide still out, it was an easy walk eastwards. Along the way I noticed a dead seabird at the strand line. It was obviously a gull but which species I’m not sure. It was pretty well rotten and very, very smelly. 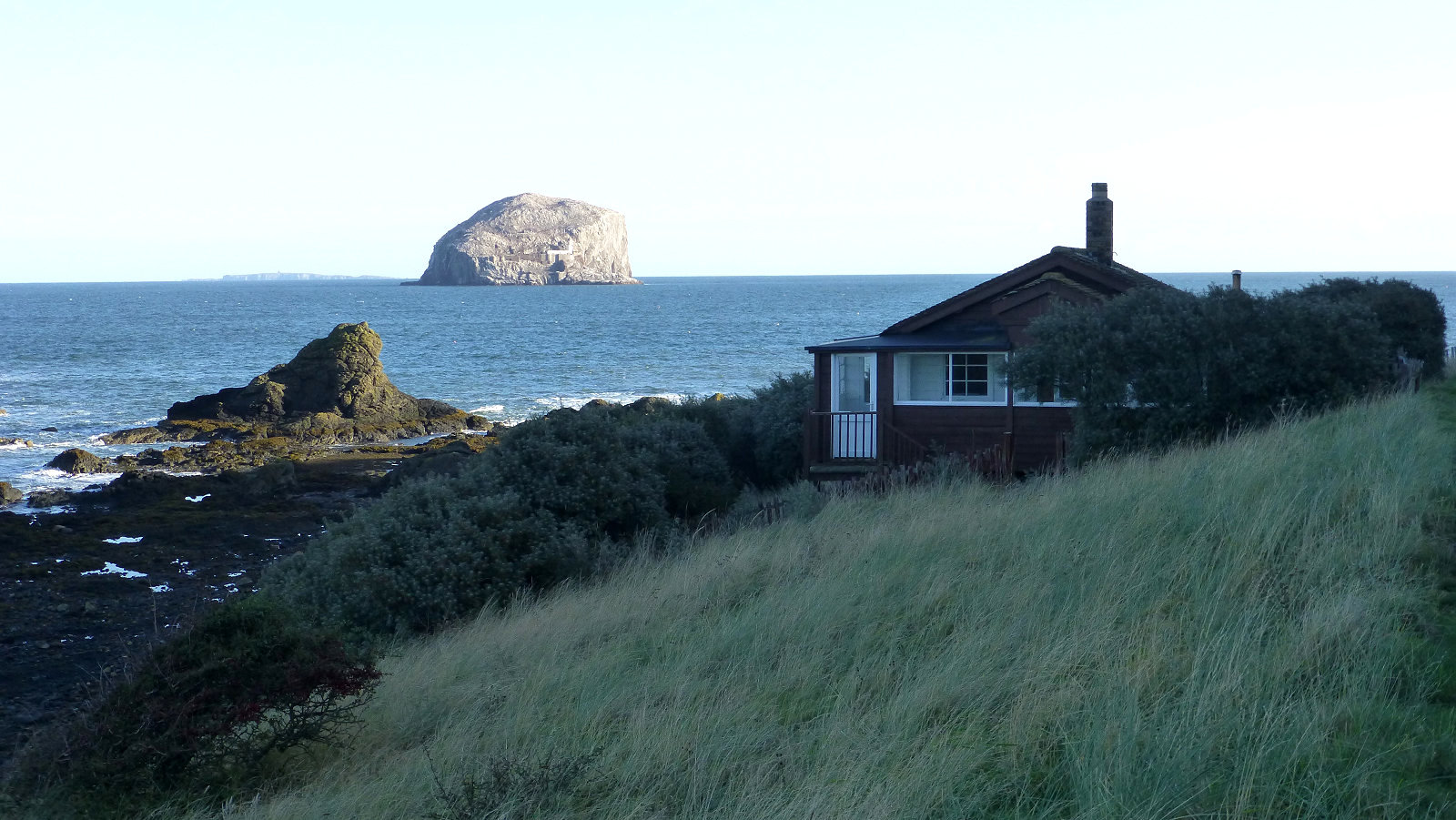 The bird was ringed, a yellow plastic ring marked 185:M on one leg, with a metal ring bearing: BTO NAT HISTORY MUSEUM, LONDON SW7 www.ring.bto, MA43185 on the other. With some difficulty, as I had to improvise stone tools, I removed the rings and would later report the details on the British Trust for Ornithology (BTO) website. They will later advise when and where the bird was ringed and what species it was. Did this once before with a mute swan I found at Gullane.

Making my way to zone DrinkAnyone, I was aware of a pungent odour that appeared to be following me. I’d washed my hands and had taken care not to let any part of the stinky corpse touch me clothing. However, it must have been one of those smells that develop a life of its own and the apparent ability to follow you for days afterwards. Even next day, after showering and a change of clothing I could still detect that noxious whiff. Zones, DrinkAnyone and CantyBay were easy takes and I made my way up the steep tarmac road and back to the car. Next stop, North Berwick and the six zones dotted along the coast between the town and Horseshoe Bay. More in Turf Blog 15-10-21 Part 2. 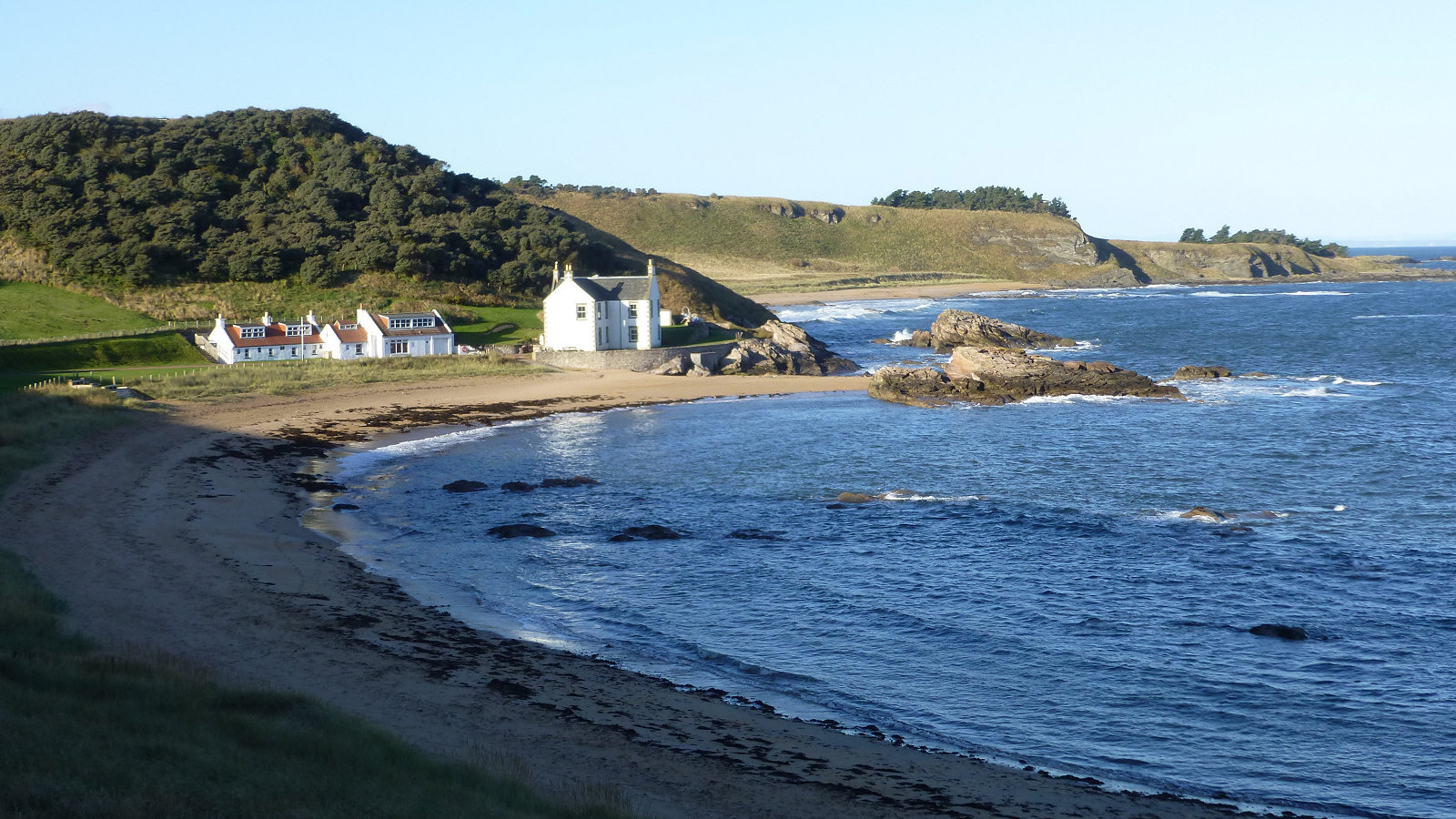