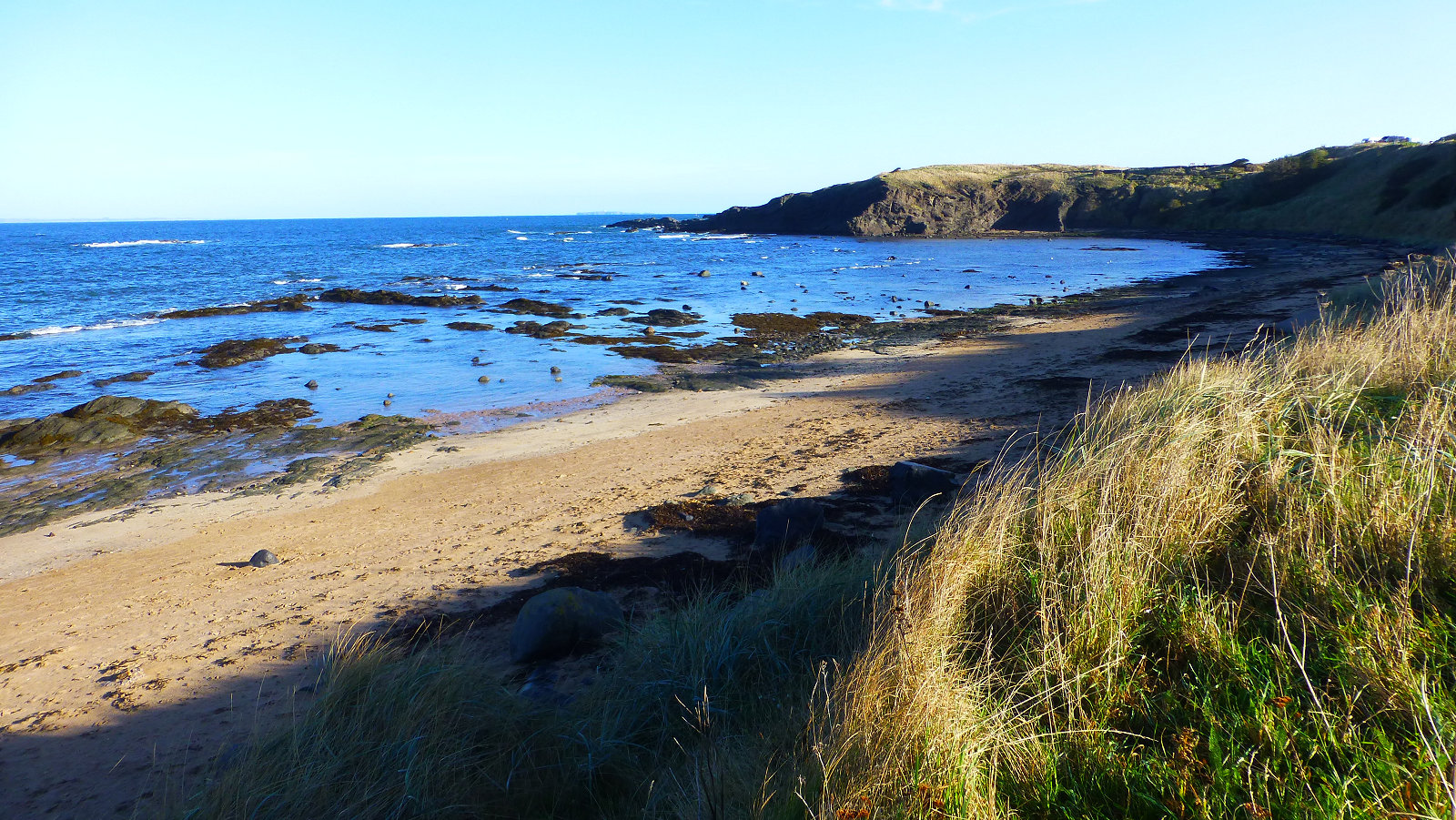 Continuing on from Turf Blog 15-10-21 Part 1, we are now in North Berwick, parked along the seafront, opposite a strange and rather sinister structure that appears to be the entrance to an underground bunker, strangely similar to the those seen in many a movie, such as Terminator 3: Rise of the Machines, Star Wars Return of the Jedi, or Wallace and Gromit’s The Wrong Trousers. However, I may me incorrect regarding the last one.

It is, apparently and according to local urban legend, a water treatment works managed by Scottish Water, at least according to the signs and parked liveried vehicles. But note the absence of street lighting, the poorly concealed cameras and the No Overnight Parking signs. All very suspicious, if you ask me. However, let us not be overly interested in the possibility of the existence, or otherwise, of secretly disguised underground bunkers for the Scottish Government, but let us turf, as the vicar was heard to say. 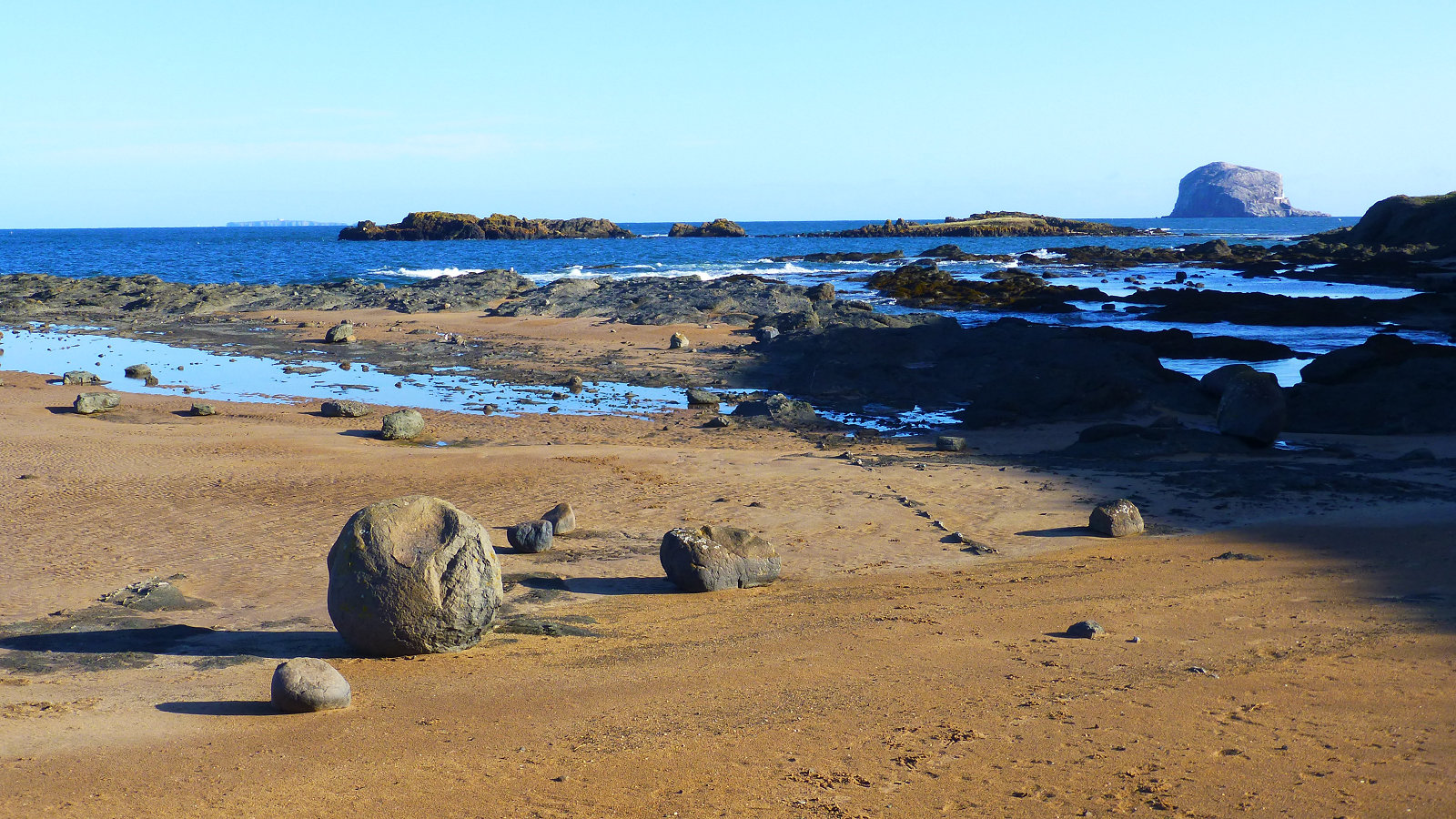 My plan for this part of my visit to scenic East Lothian was to take the unique zones located along the coast between North Berwick and Canty Bay. I’ve already taken the zones beyond Canty Bay and now want to complete the set. The zone at Tantallon Castle was out of bounds for the moment but will always be there for another day. My first take here was zone BenchWarmer, and easy few paces from the car. You can even take this one sitting down supping a coffee and nibbling a Kit-Kat, should you so wish. Which I didn’t because I’d already downed a coffee and a Kit-Kat in the car before I noticed the benches.

The well-trodden path follows the shore line eastwards, and you can choose between keeping slightly further inland and follow the path along the edge of the golf course – noting the various signs warning that golf may be in progress – or if the tide is out, walk along the shore, a mix of sandy beaches dotted with pebbles, cobbles and naked rock outcrops. Today I was mixing the two, both to take the zones and also to make the most of the beautiful scenery of some zone photography.

DaisyView was the next zone encountered. The zone is located at an area called Partan Craig, an interesting horseshoe shaped area of sand enclosed by sea-worn rock. A number of large boulders are dotted about the area, one looking like a giant marble and a rock I would love to take home for the garden. I made enquiries regarding the matter with East Lothian Council but still await a reply. I’m not keeping my hopes up. The scene here I find reminiscent of photographs taken by NASA’s Mars Curiosity Rover, just needs a slight reddish tint added. The next zone was DaisyBeach, opposite a small group of islands called The Leithies. Unfortunately, the tide was in, covering the sandy spit that allows access to the island. 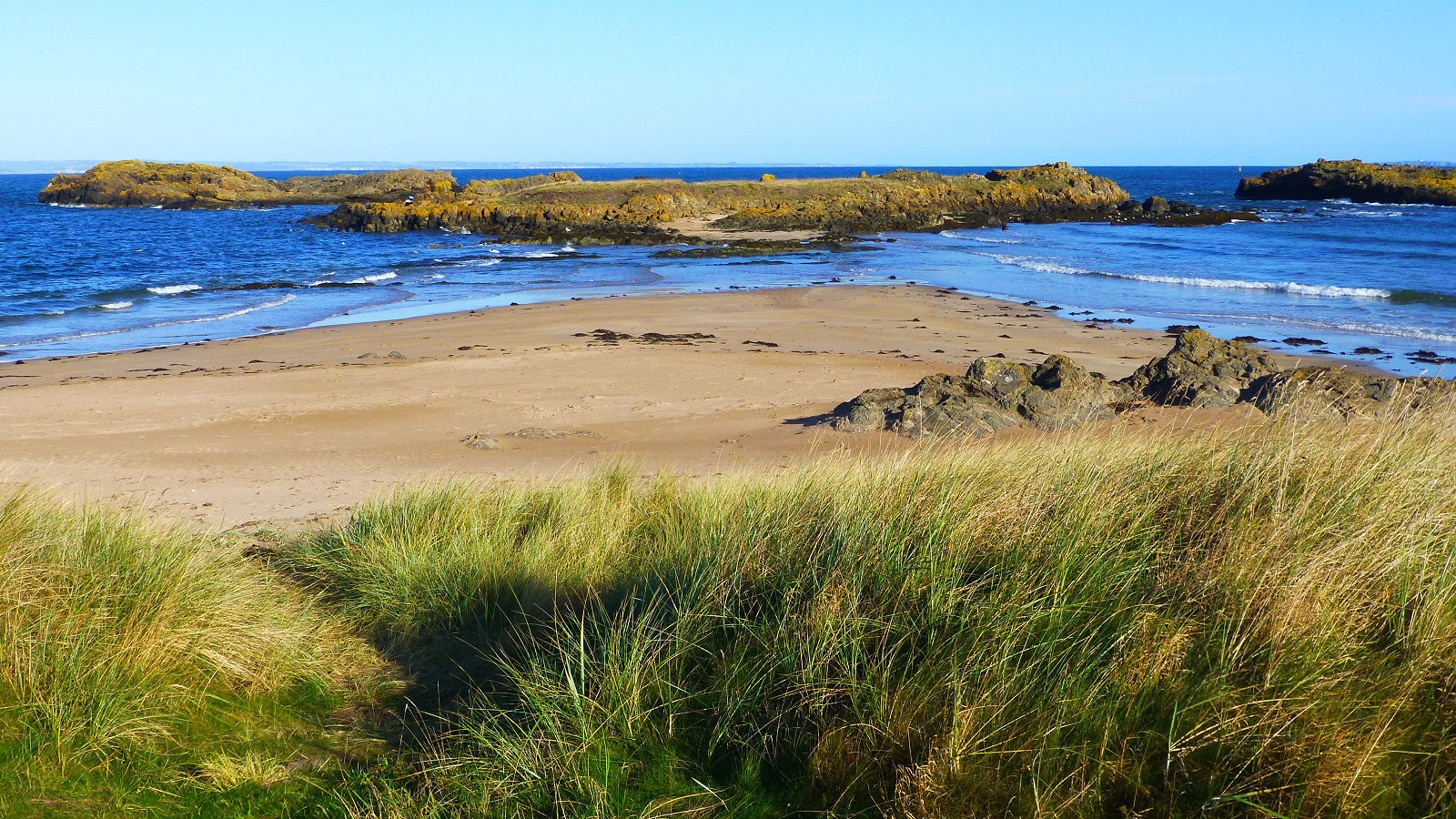 A short walk brought me to zone TheYellowMan, quickly followed by zone Leckmoram. After that I had one final zone to take along this stretch of the East Lothian coast, zone HorseshoeSand, located as you might expect in Horseshoe Bay. The main problem today was that the tide was in and covering the rocks which along my usual route here. I’ve always walked this way at low tide never at high tide and didn’t know if I’d get round. However, I spotted a little path of sorts leading up the grassy cliff at Horseshoe Point and chanced my luck there. After a short climb is descends down into Horseshoe Bay. It appears to start from the golf course. It’s always good to come across other paths you are unaware of. 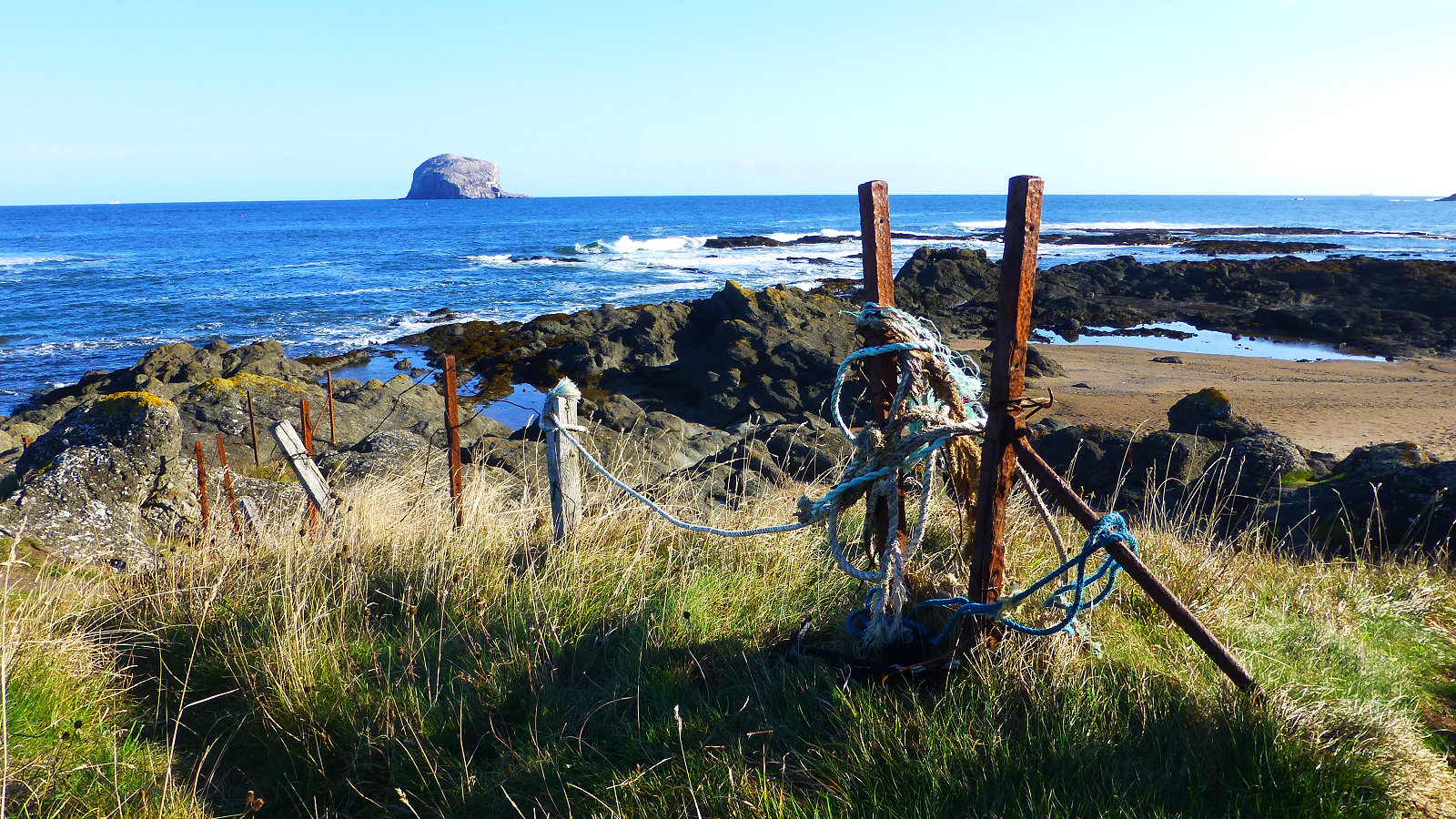 I lingered a while in Horseshoe Bay and found a spot for lunch. It was very pleasant watching the rollers breaking along the shore, the occasional flocks of small waders, flying just above the waves and a few rock pipits peeping to each other on the cliffs to my left. After lunch I retraced my steps along the shore, taking my time and looking for anything interesting on the beach. I picked up a small piece of driftwood I wanted for an ornament I have in mind to make along with a too-large sample of sand from a dark patch I noticed. It looks to the untrained eye as oil contamination, and actually feels like oil, but is actually darker iron-rich particles composed of minerals. You can actually pick this sand up with a magnet.

Returning passed the golf course, I was witness to some amazing and spirited attempts at the game of golf. Three middle-aged chaps were teeing off. Now, had I been a scout of the alien Vogon race, visiting the planet on a survey mission to facilitate an intergalactic highway construction project for a hyperspace express route which incidentally includes the destruction of the Earth, I would have been hard pressed to determine what the purpose of the game actually was. It would appear there are two possible theories regards this. The first is to use the knob-ended stick to propel the ball along the grassy bits and eventually into a small round hole. The other is to use the same stick to excavate and propel large chunks of grass, soil and accompanying earthworms from one part of the course to another. Where the ball lands indicating the location where the next chunk of grass, soil and accompanying earthworms should be played. Either option seems feasible as far as the trio being observed at present. 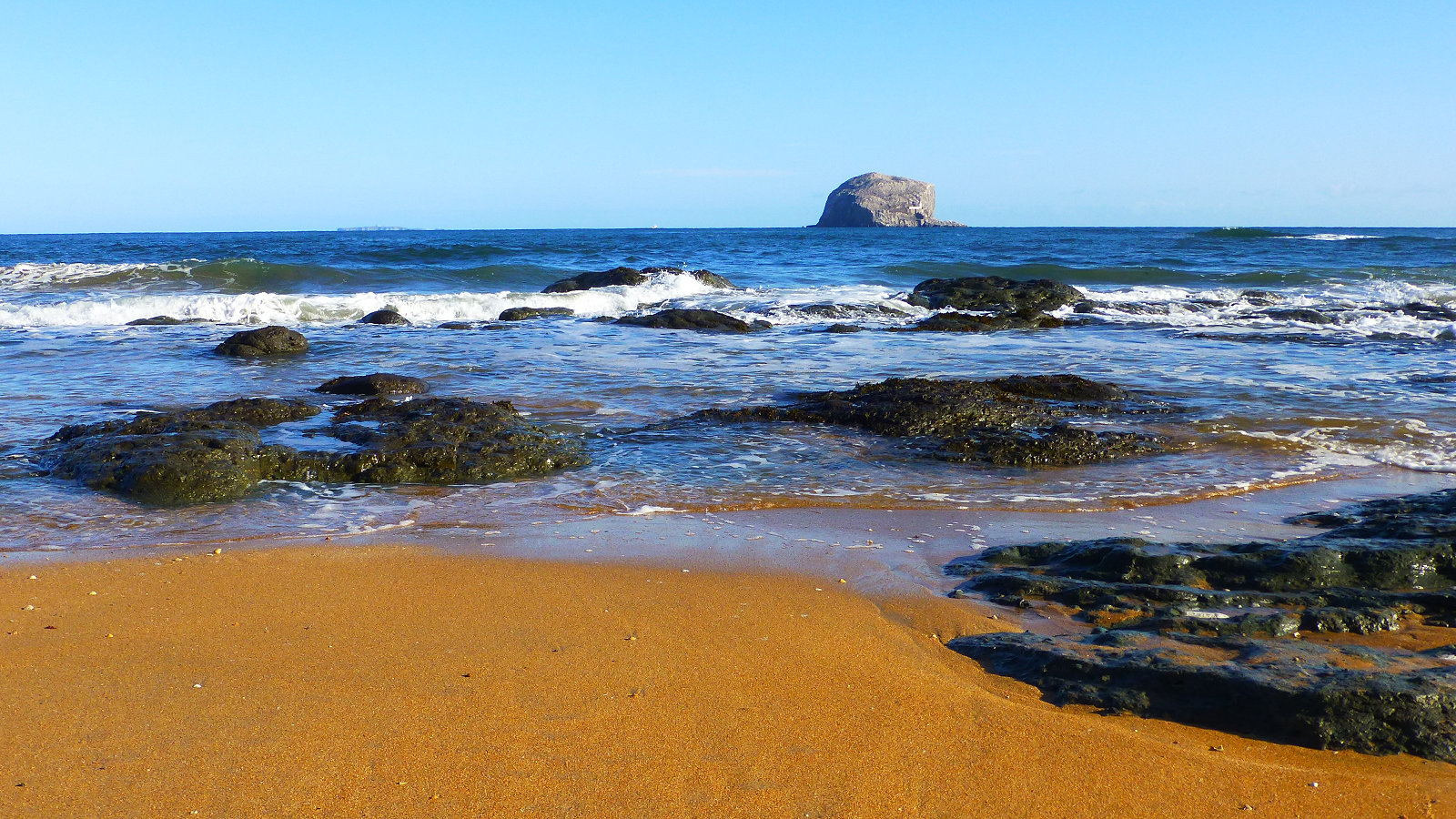 Back at the car I headed for home, leaving the zones in North Berwick for another dedicated trip with either the Swifty kick scooter or the Ogre bicycle. I stopped off for a flying visit to Chesters hill fort for the zone of the same name. The hill fort dates from the Iron Age and is well worth a look around. Note there are only three parking spaces on site but I suspect it rarely gets busy.

Next last minute detour, and a final destination for the day, Traprain Law, near Haddington, for the three zones located here. This is another of those locations where bicycle turfing is not ideal. You either have to leave the bike chained up in the parking area, walk up the hill to get the zones, while worrying that your bike might not be there when you get back. At least that’s what I would do. Or, push, shove and carry your bike to the summit. It’s quite an effort as I’ve done the very same in the past. 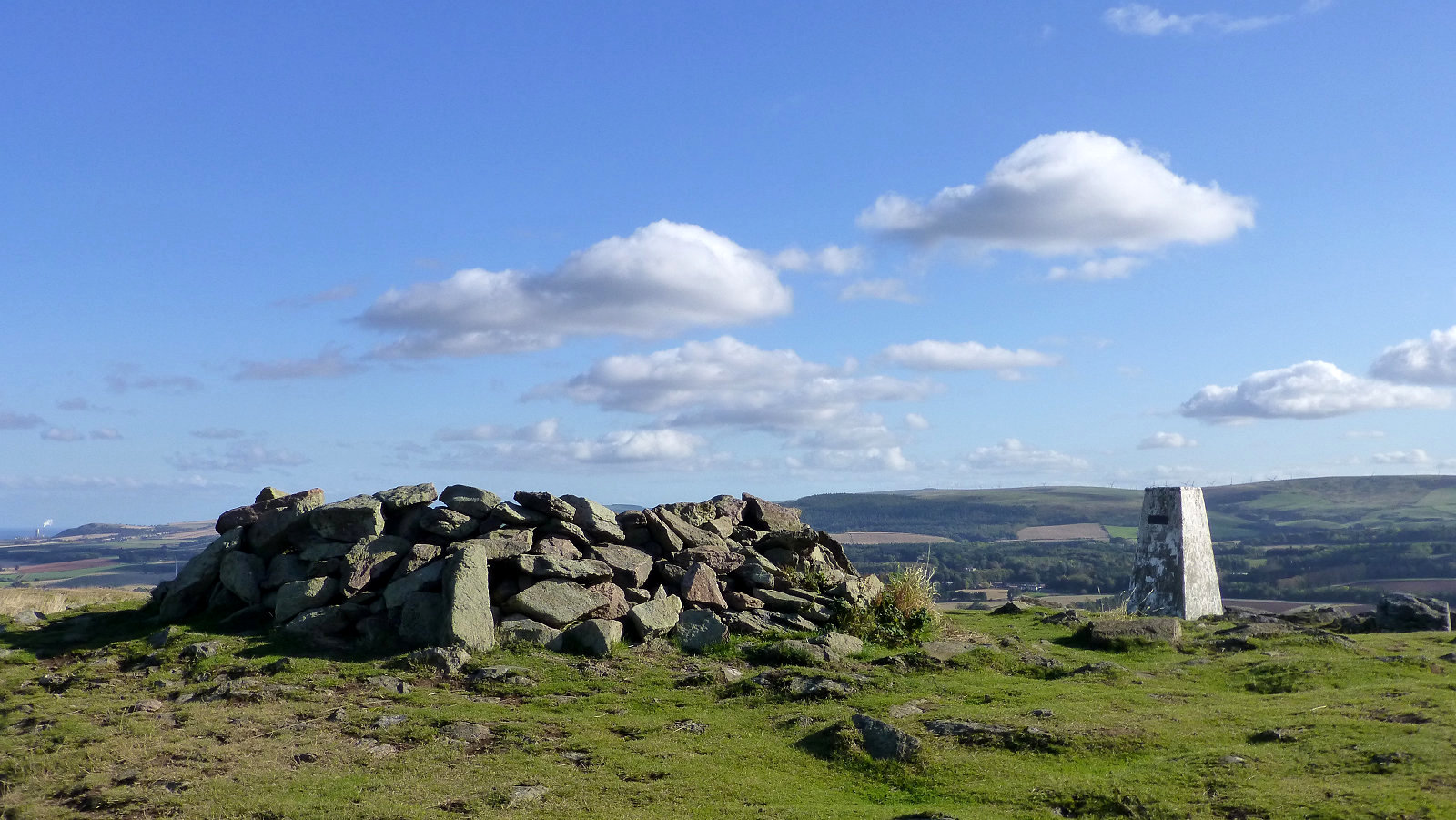 These days I prefer to walk. Hard enough doing that up Traprain Law with an aching back never mind logging a bicycle with you. First zone to fall is DarkSideOfLaw, located on the shadow, or north side of the hill. The following zone, ThereYet, is aptly named and found about half-way up the path. The final zone is TraprainLaw, situated around the cairn and trig point. And that was that. Not a lot of zones taken, only 16 in total, but well worth the effort, not only as they were all uniques towards the 2500 Unique medal but for the splendid scenery that coastal East Lothian offers. As they say on Strictly Come Turfing, keep on turfing.