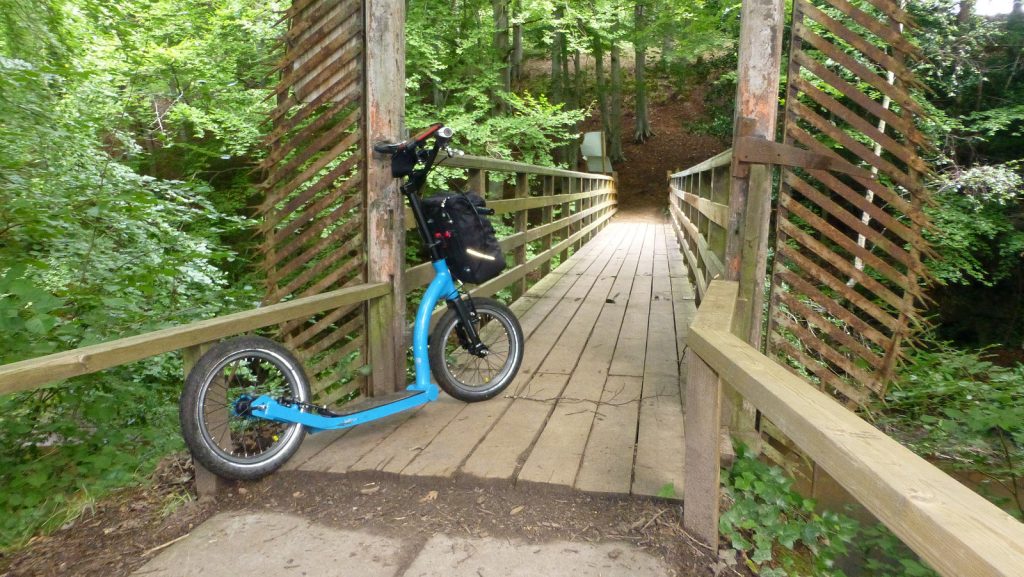 Today, 16th June, saw me out on another nocturnal turf mini adventure, this time following the paths through the woods around Newbattle Abbey College, again enjoying the delights of my Swift Air kick scooter. It’s so much more fun than cycling or walking. And I had a good reason for this excursion, a Strawberry full moon. Well, almost. Full moon was actually yesterday but near enough to be full. The name comes from Native American traditions. It’s also a supermoon, a term used when the full moon is situated at a distance of at least 90% of perigee (the point where the moon is nearest Earth).

Moonrise was 23:10, so it was sitting nicely above the south-east horizon when I set out around 1.00am. I was actually pleasantly surprised to see the moon as the weather forecast indicated cloudy conditions. Three zones in Bonnyrigg got me started then I looped out around by Grove Farm for the two zones there, and entered Newbattle woods at Lothian Viaduct. The path here is called Lady Lothian’s Walk. The path beside Grove Farm is very overgrown and I made a mental note for a thorough tick inspection when I get home.

It was cooler that I’d expected with patches of cold air in the low-lying hollows such as along the Pittendriech Burn. But on the higher ground, for example at zone TheRedwoods, it was much warmer, the trees trapping the warm air from the day. Not that the cold air was any bother when kick scooting as you soon generate plenty of heat, for example, trying to kick scoot up the steep rough track of the Lady Lothian Walk. I was down to just shorts for most of the night.

The route offered up another five zones and after zone TheNorthPath, I stopped turfing for a loop around Newbattle golf course. It a hard slog uphill but you get a great downhill scoot along the edge of the fairway, though the rough can be well, a bit on the rough side for scooting. Came across a badger feeding in the rough and it didn’t run off which was nice for a change. I came across it again later when scooting down to the river. I heard something running towards me and spotted the badger heading across the fairway at speed. It looked like we might cross paths which we did, the badger doing a fast double-take what-the-fuck-was-that before disappearing into the wood at speed.

Being out at night can play all manner of tricks on the mind. Not for the first time I’ve thought there was someone waiting ahead of me only to find it was a tree stump, comms cabinet, arse end of a cow or a row of fence posts seen from an angle. Same with lights. I spotted one of the corner of my eye last night. Was it just a street light further away? Was it still or stationary? Which direction was it moving? Very difficult to work these things out at night when distance is difficult to judge accurately. Best thing to do is stop and watch. Turned out to be someone walking along the path wearing a headtorch. This was just after 2.00 am. What were they doing out at this hour? Could have gone and asked I suppose but I like to be inconspicuous, so lights off, kept still and quiet and he/she passed me by without noticing.

Back to turfing again. Next zone was SouthEsk, located on the Maiden Bridge over the South Esk. And, of course, all that running water reminds me I’m in need of a pee. Which brings to mind, as I water the local bushes (very, very carefully I might add, as there might be stinging nettles about), adding some urea, creatinine, uric acid, chloride, sodium, potassium, sulphate, ammonium, phosphate and some other stuff as well, is taking a piss in the woods actually legal or is it against the law? Thankfully, it appears not. Which is a great relief I must admit, at times anyway. Just so long as there’s no an undercover police officer or birdwatchers lurking in said bushes. Common sense prevails I reckon.

Back on tarmac again, I’m on my way towards Kirk Bank Wood for the four zones there. It was cool down by the riverbank, but that little bit of height gained made all the difference to the temperature. Much warmer in the trees. One my way home now and very still and quiet under the trees. Can hear some wildlife rustling in the undergrowth, same place I saw the badgers the other night but couldn’t see anything. Soon, three zones taken and I’m dropping back downhill for zone StoneGate. Temperature drops again. Police van goes past on blues-and-two’s, turning left at the roundabout towards Bonnyrigg, the direction I’m heading.

As is often the case, I’m thinking up ideas to make turfing more interesting. How about turfing with the added proviso that you mustn’t let anyone see you turfing. Sort of turfing behind enemy lines as it were. Not sure how practical this, okay, yes, daft idea, would be but it might be fun. Another police car passes me on blues-and-twos. This one slowed down slightly when passing me, giving me the once over. I’m an odd sight I suppose? Final zone was PeacocksBeard, then tea, munchies and bed. Back soon.