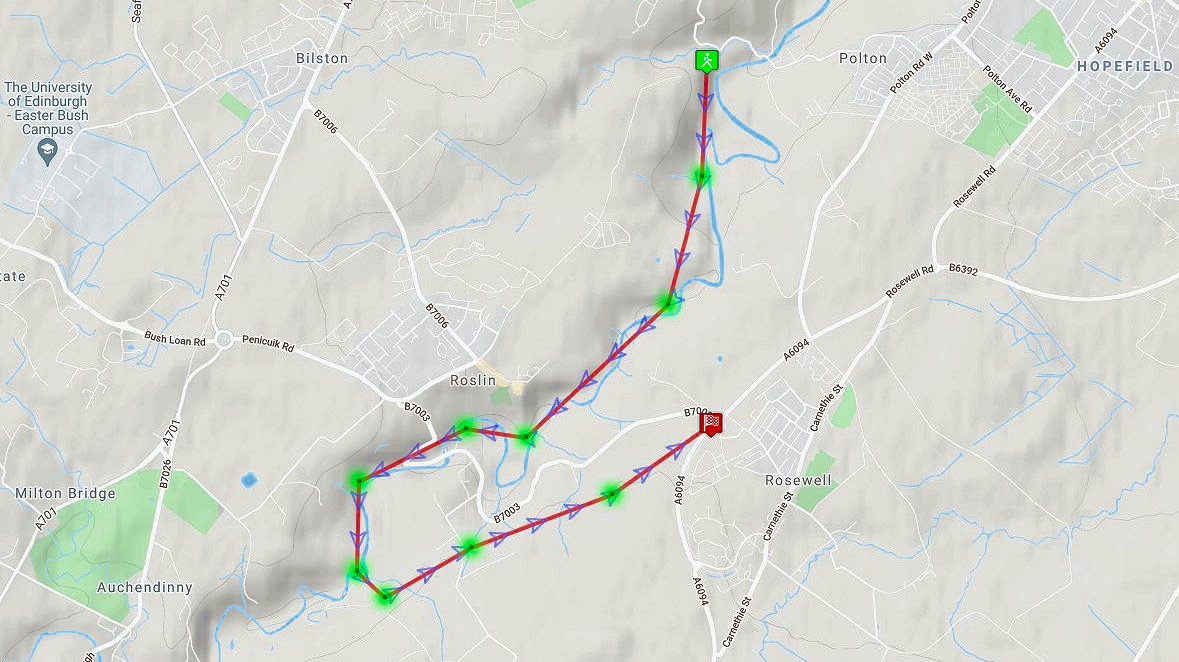 For my next night turfing session this fine evening/early morning, I had in mind a route starting from Springfield mill down in Polton, following the path upstream on the north side of the River North Esk to Roslin Glen, and returning via Roslin Gunpowder Mill and the Dalkeith to Penicuik cycleway. Thankfully, I’ve done this route before both on Shank’s pony and on the Surly Ogre bicycle, so knew what to expect. I will say now that if you’ve not been here before during the day, I would not suggest you make your first attempt at Silly O’clock or the wee small hours of the night. My recollections of the route bring to mind 6ft high nettles, very muddy and smelly bogs, indistinct paths, fallen trees, loose surfaces and a considerable amount of pushing, portage and cursing, mostly on the day I cycled the route, or more accurately, took a bicycle with me.

My reason for the trip was to tick of four unique zones – HewanWood, Fordcrossing, GoingNorth and NorthEskWay – that I wanted to take as part of my plan to visit each and every zone in Midlothian, and after that, East Lothian and Edinburgh. These four zones had been pestering me for some time, so tonight was the night. As usual I checked the Turf app for turfers and only Féarglas was out and about in Edinburgh. No doubt she will spot me at some point. What other idiot would be attempting this route at this time of night?

Still saving the Bonnyrigg zones for the Darkest Ninja attempt, I kept the GPS off on the Turf app as I scooting through Bonnyrigg on the Swifty Air, until I was down in Polton, crossed the river and started the climb to the first zone on the night’s itinerary, zone HewanWood. My choice of an anti-clockwise direction was probably not the ideal choice. It would probably have been (slightly) easier the other way round but ho-hum. The path here, and for much of the entire route, is rough loose dirt, with numerous tree roots, rocks, boggy areas, steps both up and down, boggier areas, stream crossings and nettles. Lovely. There’s also a scary knife-edge ridge section where you need to take some care. It’s not so obvious at night but I knew it was there. Best not to cycle or scoot this part.

HewanWood was an easy take with no issues with the GPS. The next zone was Fordcrossing. As you ascend you will reach a gate and information board. If you head straight onwards you will emerge at Roslin Chapel but my route was through the swing gate on the left through Hewan Wood and down some steps towards the river. Back in December 1979, there was a massive landslide here and there’s an interesting account of the event at the Edinburgh Geological Society website.

Taking Fordcrossing was not straight forwards. It did initially appear on the app and was taking but then stopped. I tried walking further into the zone – and that was off the path and into the woods to the north – but it stopped again. I then restarted the mobile but ended up with 0 zones and 0 points on the app. Only after I backtracked about 10 meters, and returned, did the app burst into life. I still had to walk about 5 meters away from the path to get into the zone. I think this one needs reported as an issue and some minor relocating.

Zone GoingNorth was my next target. The path did not offer much opportunity for actually kick scooting on the Swifty Air, though the occasional section did provide some brief fun, or rather a change from either pushing it along beside me – no mean feat I might add when the path is little more than a foot-wide game trail – or carrying it. There is a knack to carrying a Swifty scooter. The safest way is over the shoulder but for short sections such as steps, fallen trees and the like, there is a temptation to lift it by the handlebars. Now, unless you are very careful, this results in the platform of the scooter swinging one way or the other. If it swings slightly outwards fine but the other way usually means it catches you on the ankles, or shin and usually takes some skin with it. I lost count how many times I caught the scooter on my legs this morning. Just one of the joys of kick scooting. It’s the equivalent of ripping your shins on the pedals when pushing a bicycle.

On-route to zone GoingNorth, I encountered a sign stating that the path was closed ahead due to a landslide. Fair enough. But was the zone on this side of the landslide or the other side? Very thoughtless of them not to include a note about the turf zone! Only one way to find out and that was onwards and downwards. Thankfully, the zone was this side and was taken without issue. However, having a keen interest in local geology I just had to see the landslide so continued along the path. I also wanted to see of there might be any sand samples I can add to the collection.

Then, just around the next bend, my light showed two young badgers on the path and I could hear another off to the right in the trees. At least I assumed it was another badger, could have been a goblin, orc or troll for all I knew. One badger scampered off soon after but the other one stayed put and continued foraging along the path. I watched it for about 10 minutes, even moving closer, really expecting it to scamper away. I was pretty sure it had seen me as it kept looking in my direction but even when I stared talking to it, flashing the scooter light and ringing my bell it still ignored me, refusing to move.

I really wanted to get past, so I moved slowly forward, and much to my surprise got to within about one metre before it reacted, baring its teeth, snarling and making short lunges towards me. No amount of shooing, shouting and waving of the arms made any difference and I was beginning to get concerned about getting bitten. I kept the scooter between myself and the badger just in case. I thought about retreating myself but I would need the scooter light to see my way on the narrow path and I would not know what the badger was doing.

Eventually, after what seems like a long time but was probably just minutes, I was able to scramble up the side of the hill. At one point I lost sight of the badger – which was rather concerning – when it moved out of the light but spotted it running off along the path. I suspect the badger, being a youngster, might have felt cornered or threatened, though it could have moved away in any other direction. Next time, I’ll just back away and leave them to it. Quite an encounter. I’ve decided to call the badger Rambo, in honour of his tough feisty nature.

I reached the landslide soon after and found the way impassable, at least with a kick scooter in tow. Tracks indicated people were coming through this way but a six-foot drop meant no way was I going to carry on. Will have to return on foot during daylight to see if any sand samples are there for the taking. My final unique zone was NorthEskWay but after much searching, backtracking and head-scratching was unable to locate the path I wanted and decided to leave it for another day. It was also staring to rain and most disappointing. But on the plus side, an excuse for another mini-adventure.

With the mission mostly accomplished, it was now time to head for home. I took zone RosslynCastle from underneath this time, usually taking it from the road above, then crossed the river at the footbridge, ticked off zone RoslinPark and scooted off for the Dalkeith to Penicuik cycleway, climbed a million steps and an easy scot back to Bonnyrigg. Grabbed another half-dozen zones on the way and made sure the GPS was off before entering Bonnyrigg – the zones are needed for the Darkest Ninja attempt, if you recall – then it was home for a cup of tea and bed, but not before doing a full body tick check before retiring and removed just the one tick. Was expecting more with all the fresh vegetation that lines the path edges.

Next, day I surveyed the damage to my legs. Not too bad considering, just a few cuts and scrapes and also set about cleaning my sandals. Along the paths to Roslin there’s quite a few boggy areas with wooden board walks, which is all very well. However, some of them are single track – just a single scaffold board in width and very awkward with a kick scooter – or a bicycle for that matter – and at one point I lost my balance and dipped a foot into the bog. You can guess what the result was. A lovely squelching sound every second step. I make a point of always cleaning muddy footwear as soon as possible. From past experience, I’ve discovered that if you don’t, they start to smell rather badly and eventually need binned. Anyone who does cross-country running or orienteering will know what I mean.

And that’s all folks. Until next time. Keep on turfing.