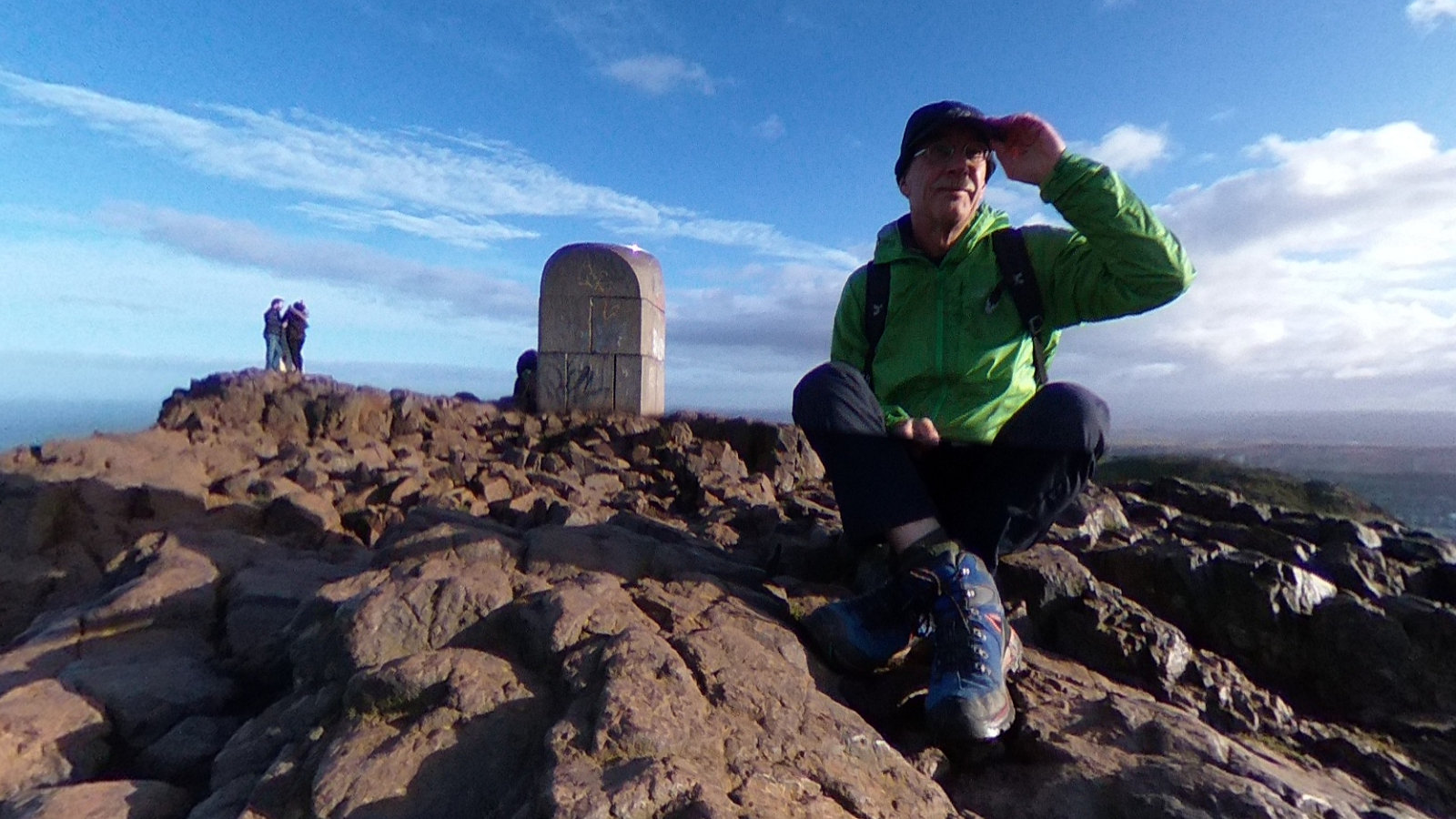 Too many zones, too many choices, so much to do, that’s the problem and most days are the same, now that I’ve retired. In fact, keeping track of the exact day of the week now requires some effort, with my world no longer ruled by times, and dates, and meetings, and all the other nonsense that is part and parcel of earning a living. Not that I’m at all worried or even complaining. When I start wondering what week or year it is, then I’ll start worrying.

The question asked each day is usually something along the lines of, “Where shall I go turfing?” Top of the to-turf list is Holyrood Park in Edinburgh, but overcast grey skies make not for good photography and I knew the top of Arthur’s Seat was the ideal location for selfies using the Ricoh Theta V 360º camera on my “invisible” selfie stick. However, after the customary coffee and four-fingered Kit-Kat at 9.00 am, the grey boring clouds parted and blue interesting skies appeared. I decided to take a chance with the weather. So Holyrood Park is would be. No 31 bus here I come. Single ticket please. 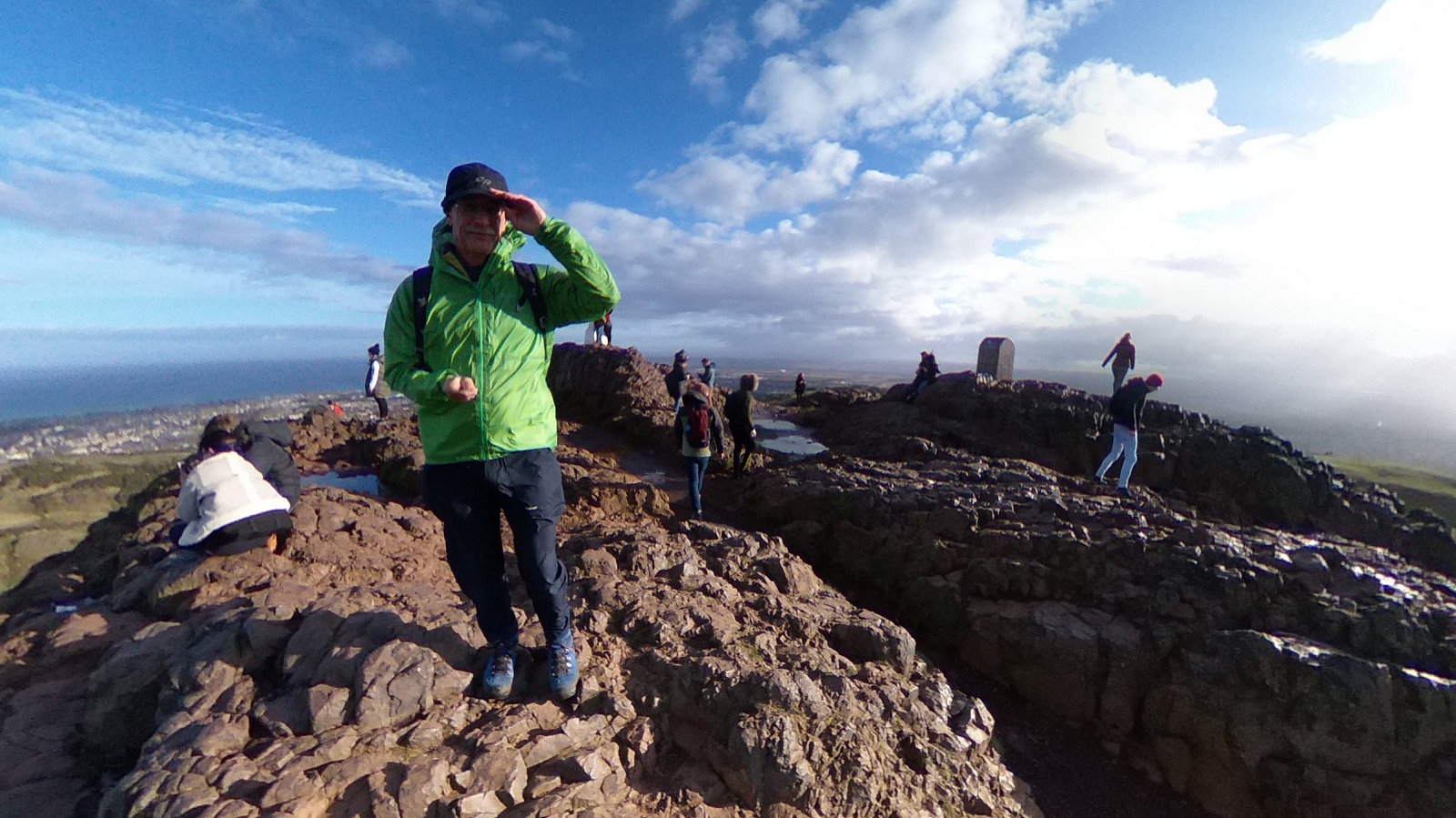 Alighting at Newington Road, I ignored the few zones located nearby – I planned to get those after I’d completed my turfing round of the park – and walked the short distance into Holyrood Park. We are so lucky us Scots. How many cities in the world have something like this? There’s the geology, extinct volcanoes and vents, lava flows and columnar jointing, glacial erratic boulders and much more. Some of the earliest discoveries in our understanding of the history of the earth were made here by world-famous Scottish geologist James Hutton. Then there’s the history, from the Mesolithic through the Dark Ages and on to today, the so-called Information Age, through I prefer the term Turf Age instead.

First zone of the day was HolyroodPark, just beside the entrance, to get me started. Then I was hunting uniques. My aim was to pick off the more awkward off-road zones, zones that would be a pain on either bicycle or kick scooter, so I left the zones around the periphery of the park for another day. Easy enough to take them with wheeled transport. I decided on a roughly clockwise route, though the placing of the zones does not make for efficient turfing by any means. In addition, I was unfamiliar with the ups and down in the park, where the paths were, and so on, so no doubt will be providing great amusement to any watching turfers with local knowledge. 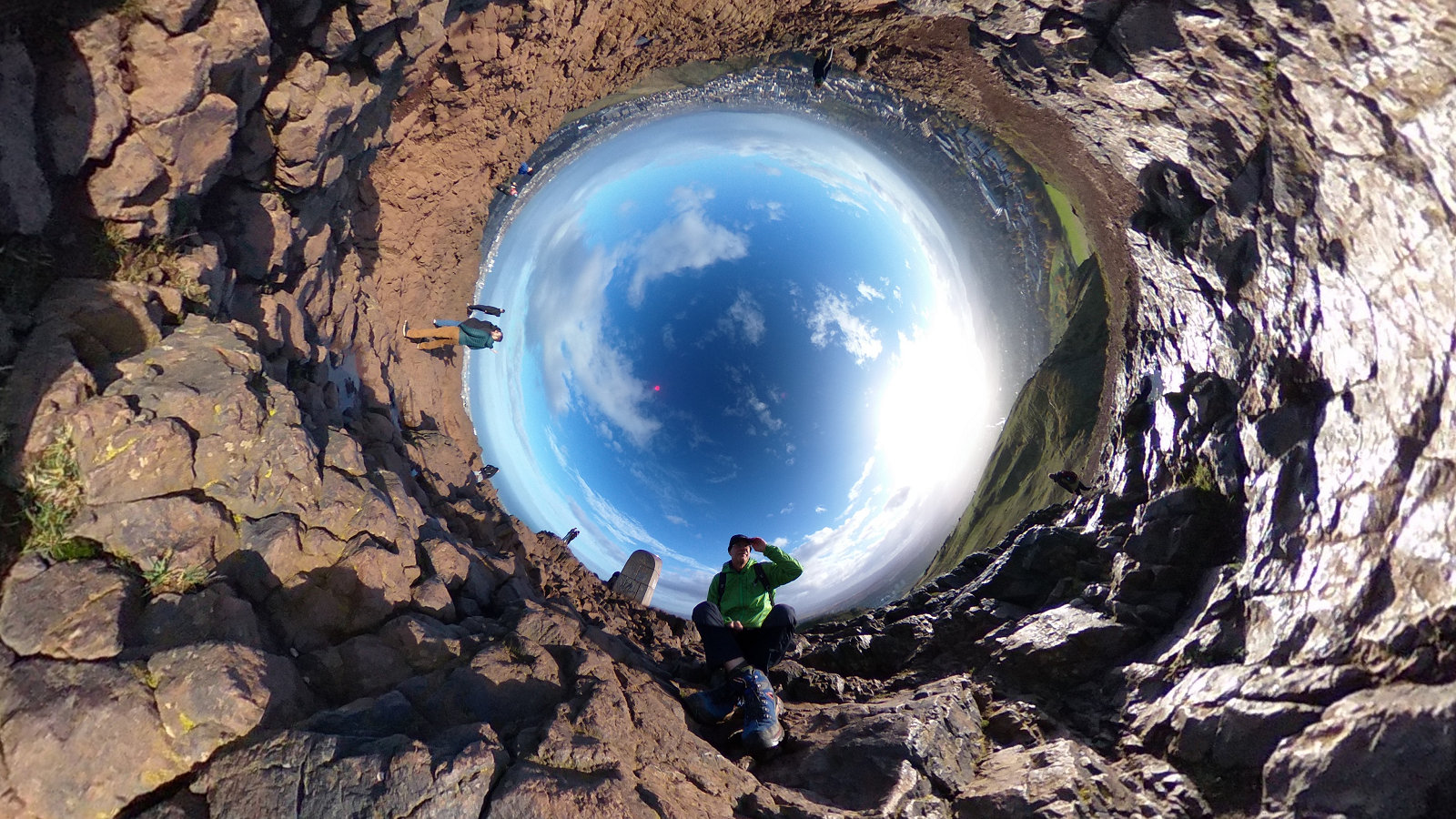 Salisbury zone was next, located on a path known as Volunteer’s Walk. Old maps shown the area was once a rifle range. The targets being on the slopes below Arthur’s Seat. Next zone was TopOfTheCrags. So back up the path I’d just descended and along the edge of Salisbury Craig’s. I noticed that the Radical Road below was closed due to rock falls. Its well worth looking at old maps of the area on the National Library of Scotland website. Names such as Gutted Haddie, Raven’s Rock, the Hawse, Powderhouse Corner and Echoing Rock make the place much more interesting. The wind was stronger here, being forced upwards by the rocky escarpment. The little cleft in the cliff face beside the zone is called Cat Nick or Cat’s Nick. Tried to find some info on the name but was unsuccessful.

Next DogsNFossils, the zone shaped like a Bonio dog biscuit. Met an older lady here, sitting on the rocks in Camstone Quarry, with a couple of dogs running about enjoying themselves. They enjoyed themselves even more when I appeared. One dog, called Tuppence, and still only a pup, tried to eat my phone, though the other dog was older and much calmer. The lady asked what I was doing and I explained about turf. Gave her a Planet Gary card which she stored in her bag, which a few minutes later, Tuppence tried to eat. My Planet Gary card, not her bag. BogJogZone was taken next. I was interested to see a few faint trails directly between these last two zones, I suspect created by turfers, turf paths. 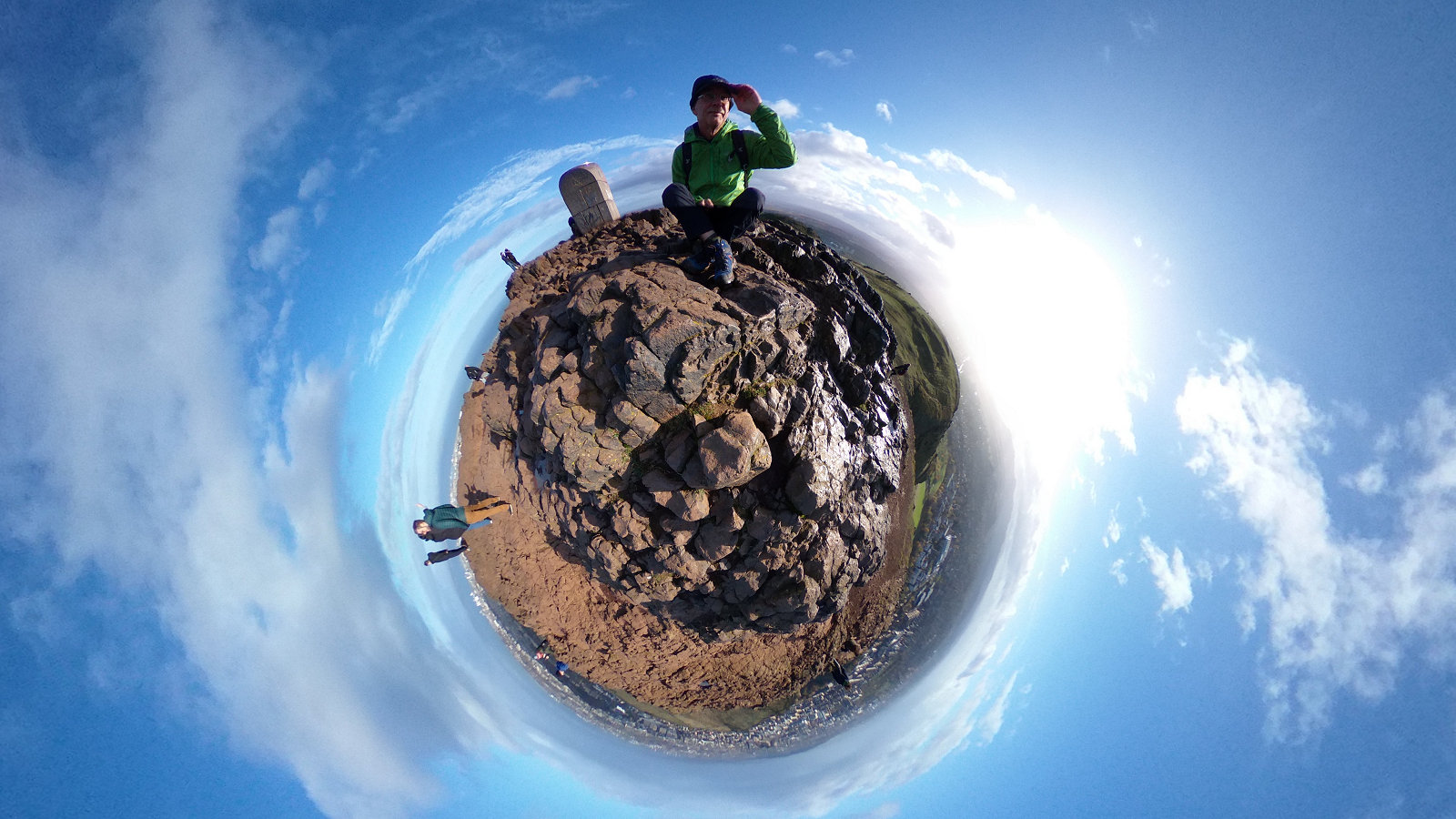 MargaretsWell was an easy take and it was only afterwards that I recalled I was leaving these easy zones for another day. Oh well, never mind. Lots of people coming this way from the town, heading along the signposted route to Arthur’s Seat, not a few of them totally unprepared and wearing silly footwear for the terrain. I would later watch some of them having no end of bother in the loose gravel and slippery polished rock sections at the summit. 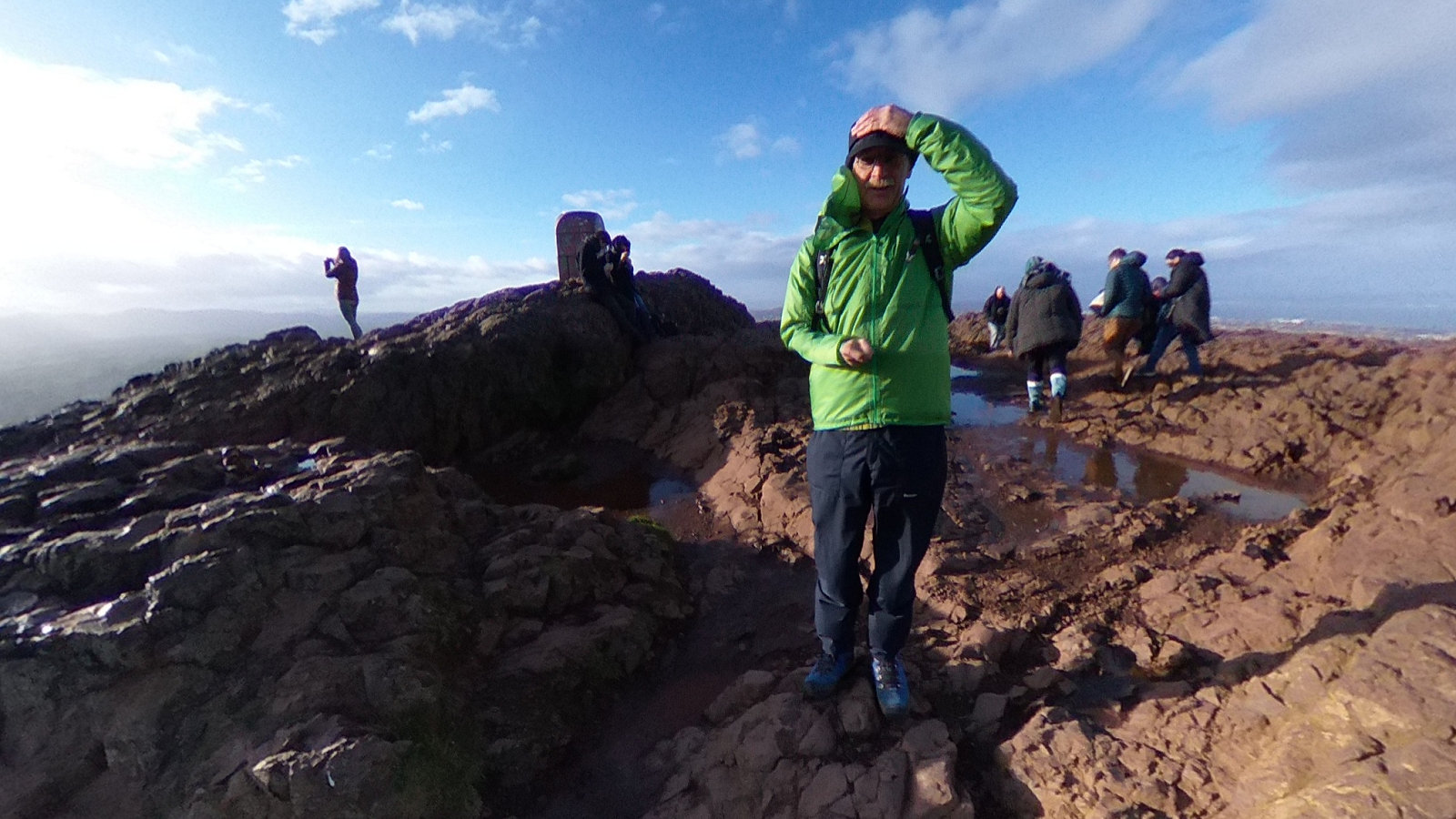 WhinnyHill zone was next on the itinerary. Initially it looked like I’d have to walk a wide circular route to get here but I noticed a wee path heading directly up the cliff face. It looked well-trodden so gave it a go. It was steep, slippery, rocky and twisty but manageable. Needed a wee breather at the top mind! Would probably have been easier taking the long way round but not half as much fun. Most definitely not suitable if you have a bicycle with you. Which, of course, you wouldn’t, as off-road cycling is not permitted in the park, as plenty warning signs will attest. After WhinnyHill, zone WhinnyWhiner, found on an area called the Quarter Mile, was my next target.

I now walked across towards the road, The Queen’s Drive, taking zone NiceView, then searching for a sheltered spot out of the wind for some lunch. I found a good spot opposite Dunsapie Loch. As I packed up after lunch, I noticed a chap heading into the bushes about ten meter to my right. I could see him, and he clearly hadn’t seen me, but I suspected he was in need of a call of nature. And when I heard a series of grunts and groans, followed with a sigh of relief, my hypothesis was proven correct. A number two, I think. Thankfully, I’d finished my lunch and was located upwind. 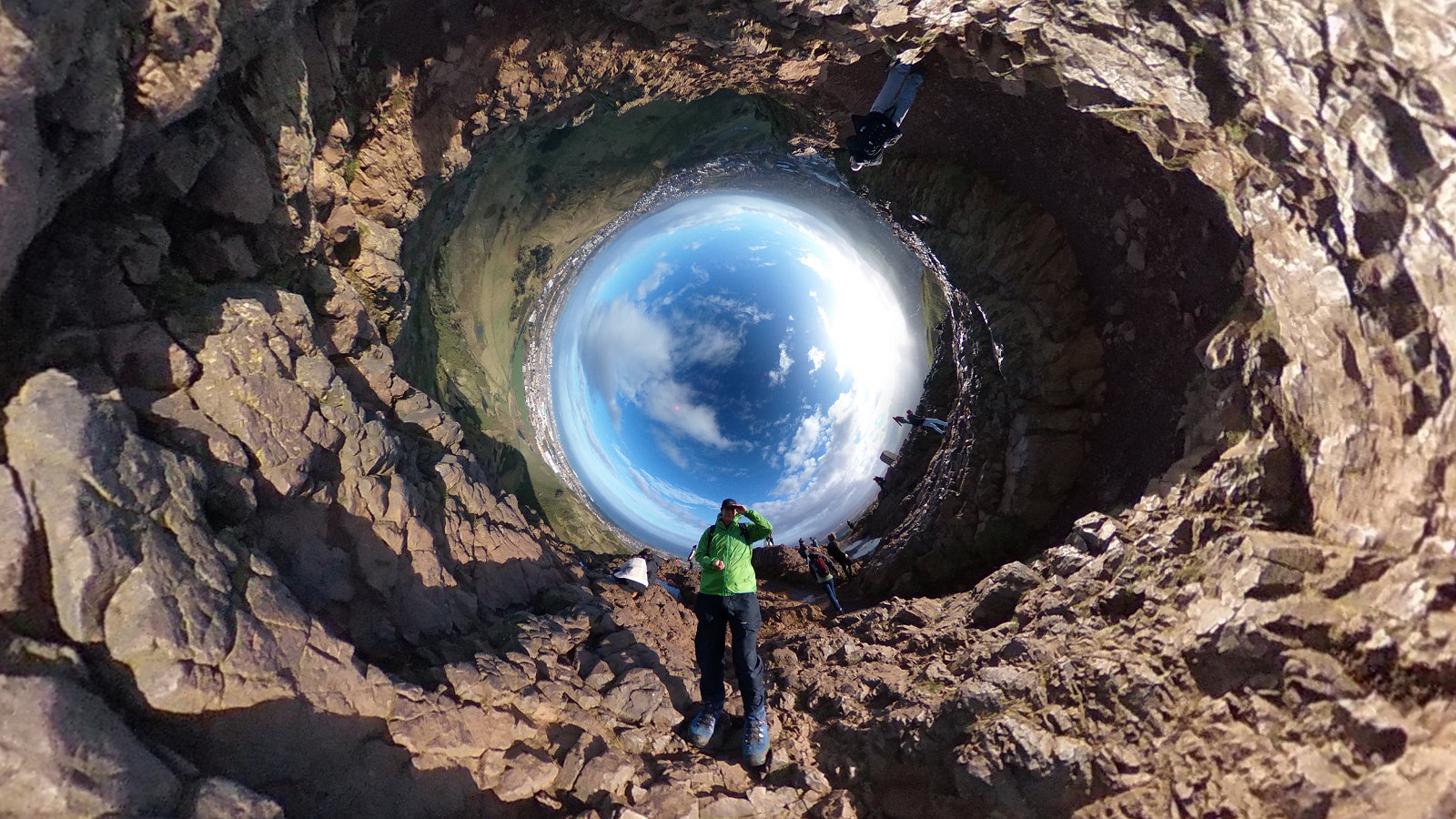 With only two zones, ArthursSeat and CrowHill, left to take within Holyrood Park, also called the Queen’s Park, I decided to tackle to Big Yin first, zone ArthursSeat. From Dunsapie Loch it’s a fair climb along Piper’s Walk to the summit at 251 meters. I had plenty of company as I ascended, mostly tourists, many with the wrong footwear, though to be fair, as many with proper walking boots. Some of the latter were really struggling around the summit area where the rocks have been polished smooth from the countless visitors to the hill. One girl was wearing a mini skirt of microscopic proportions, but she did have a good pair of Berghaus Scarpa hiking boots!

It had been drizzling on and off much of the morning with a few heavier showers at times but the summit was now bathed in bright sunlight and clear blue cloud-flecked skies. So it was out with the Ricoh Theta V 360º camera mounted on my Insta360 “invisible” selfie stick. All the images on this page were taken using this camera. It has two lenses, one front and one back, and a magic spirit called a Brownie, that lives inside the camera, rapidly paints an image that combines the view from two lenses, encompassing everything around the camera, all 360º, top to bottom, left to right, and everything in between. The brownie also edits out the selfie stick I’m holding in my right hand, hence “invisible” selfie stick.

Back at the computer, another brownie creates a wide range of images from the single 360º image. In addition to normal shots, there’s one called little planet and another I call “down the rabbit hole”, both creating some weird and wonderful scenes. My last zone was CrowHill, an easy take from Arthur’s Seat. The brownie gives its name to the famous Box Brownie camera produced by Eastman Kodak in 1900. 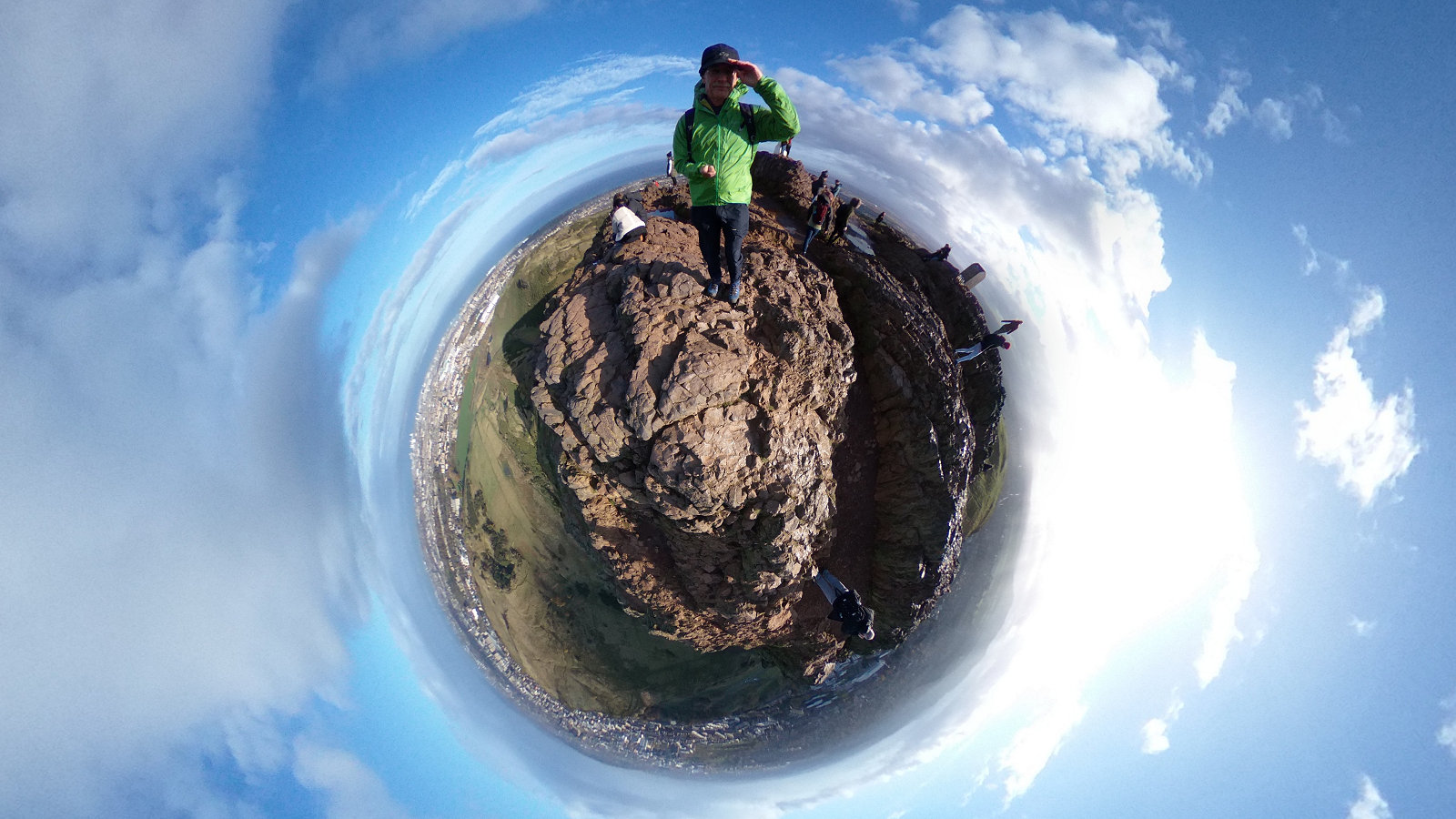 With my main Holyrood Park mission complete, I spend some time taking a few unique zones in the Newington and Craigmillar areas, adding another dozen or so to the tally, now sitting at 11118, leaving only another 1382 to go. Then I jumped back on the No 31 bus for home. Back at the house, a slight moment of panic. The key I pulled from the rucksack was the wrong key. It was the key for the conservatory door, accessed from the back garden, not the key for the main house door. As both the rear gate and the internal door between house and conservatory were locked, I was scuppered. Thankfully, a careful check inside the rucksack produced the correct key. Phew!