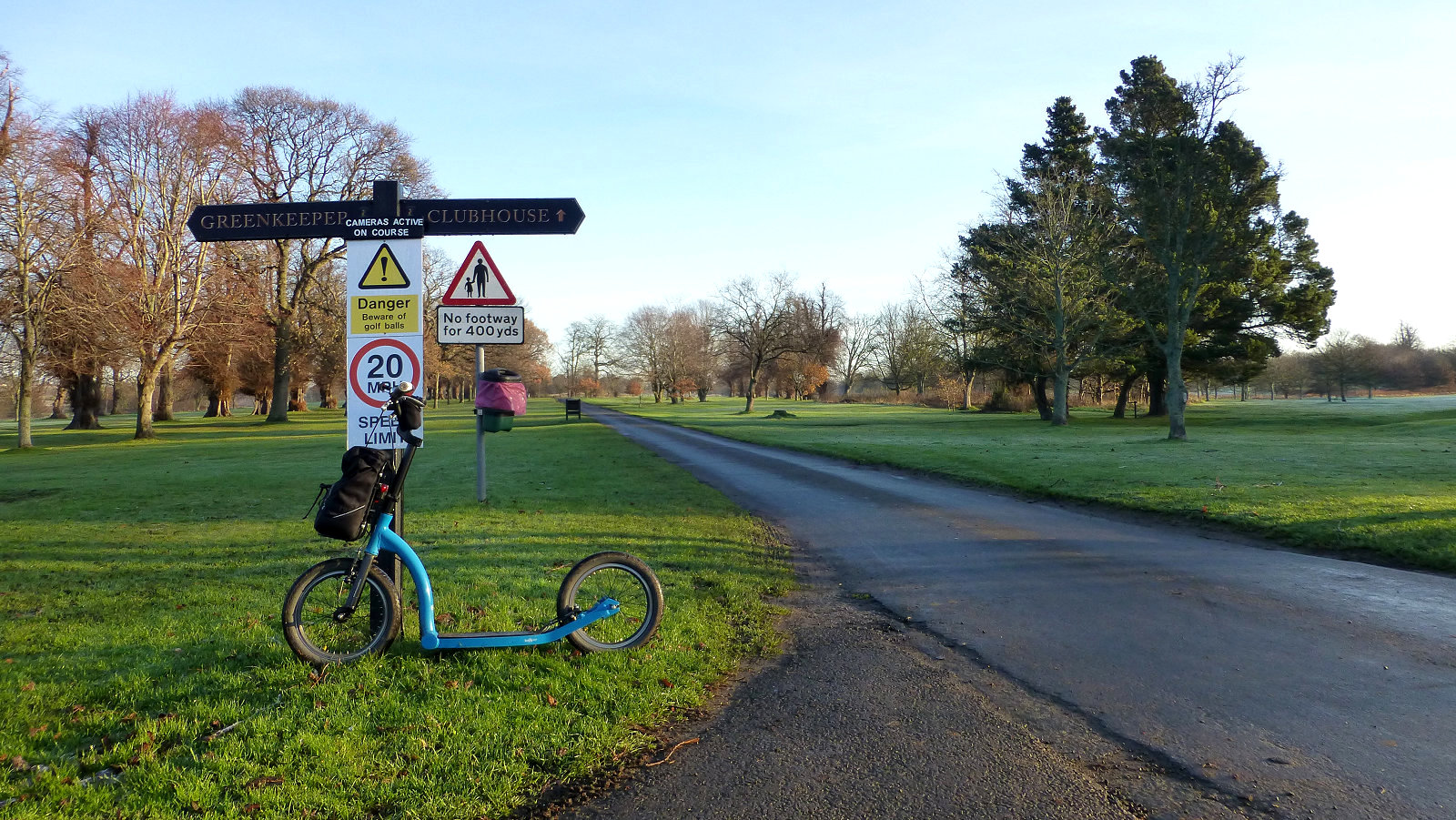 I have decided today, after spending three hours on the Swifty Air kick scooter, merrily kick scooting around Haddington, that a Swifty kick scooter is much more fun than riding a bicycle. Okay, it’s a good bit slower, takes more effort (especially on the up bits, muddy bits and gravelly bits) and tends to attract a lot of attention. But you get a much better workout than cycling. Not only do the legs get worked silly but the upper body works equally hard. There’s something magically simple about kick scooting along. There’s no rush, it’s calm, it’s gentle, and chilled and serene. Difficult to describe unless you’ve tried it yourself. And I don’t have to worry about traffic on the roads, that’s because I’m on the pavement.

The purpose of my visit to Haddington this morning was three-fold. Hunt for unique zones, keep up my Five-A-Day and complete the day’s assignment for Kalender Turf 2021. Actually, I was originally planning on heading across to Queensferry hunting uniques (including on the Forth Bridge and in Inverkeithing), but the forecast showed fog and mist – not ideal for photography – and as Haddington was showing blue skies and sunshine, seemed a better option. Mind you there was a niggle in the back of my mind later on that Queensferry might have had more interesting light conditions as the mist or fog cleared. But never mind, there will always be another day. 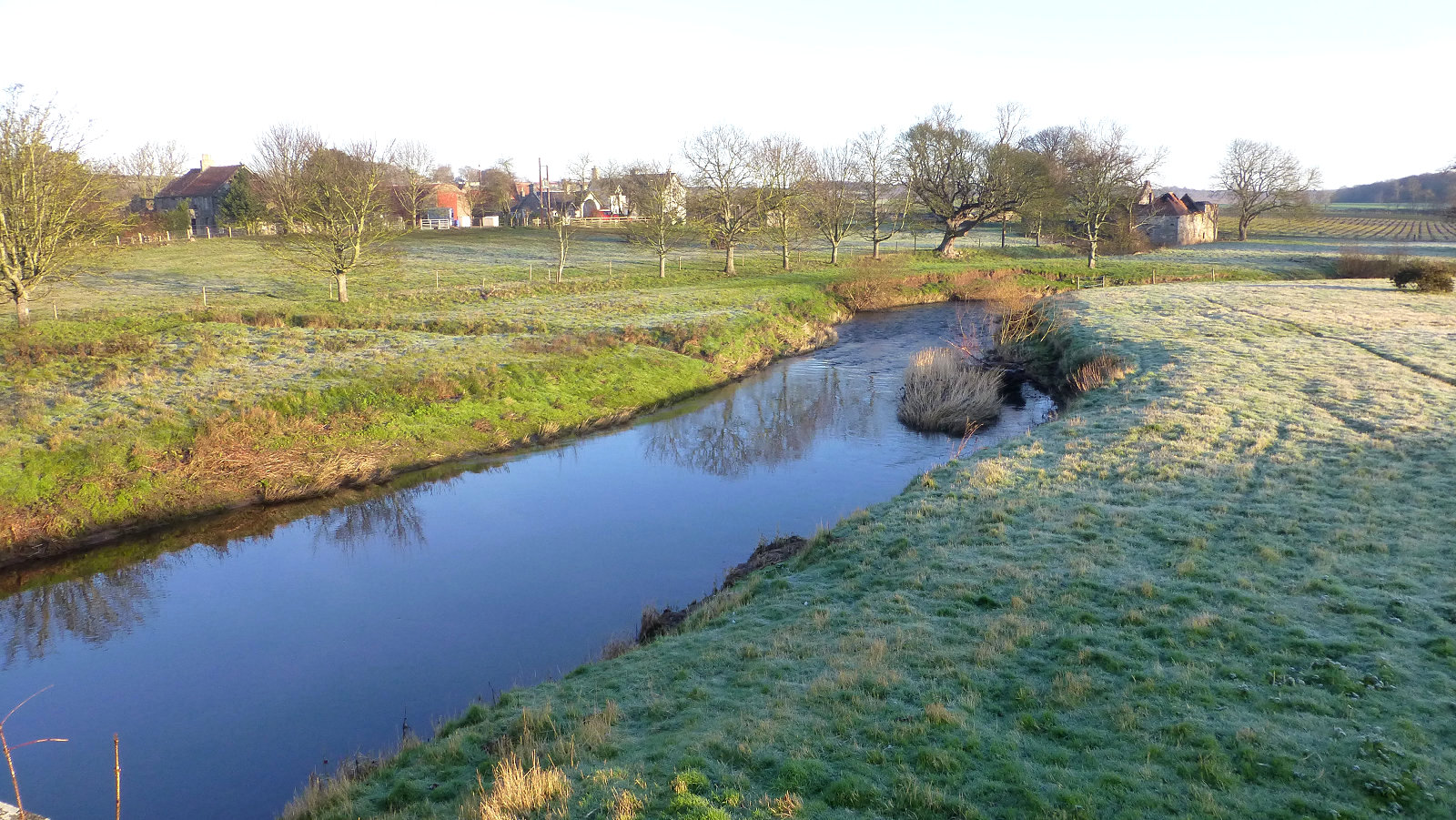 Haddington was much colder than Bonnyrigg, with frost still lingering on the low-lying ground beside the River Tyne. To start the days turfing I decided to follow the riverside path downstream, cross over to Amisfield Garden, then return through the golf course, picking off about 10 uniques for the pot. The path itself wasn’t too bad, mostly firm with frost but with a few muddy thawed patches where the early morning sun had reached. I hadn’t expected Amisfield Garden to be open at this time of year but it was and I able to get the zone there.

After that it was a clockwise loop around Haddington picking off zones here, there and everywhere. The going was fairly easy in the south side of Haddington, bearing in mind I’m kick scooting and without gears. The other side was steeper, so found myself walking in parts, but I don’t mind that. Being new to turfing the area, it wasn’t always easy to find routes to zones, or rather direct routes to zones. Many a time I’ve ended up taking the long way round. For example, at zone TyneFootball, I found myself on the wrong side the old mill-lade. However, still managed to get within the zone area. 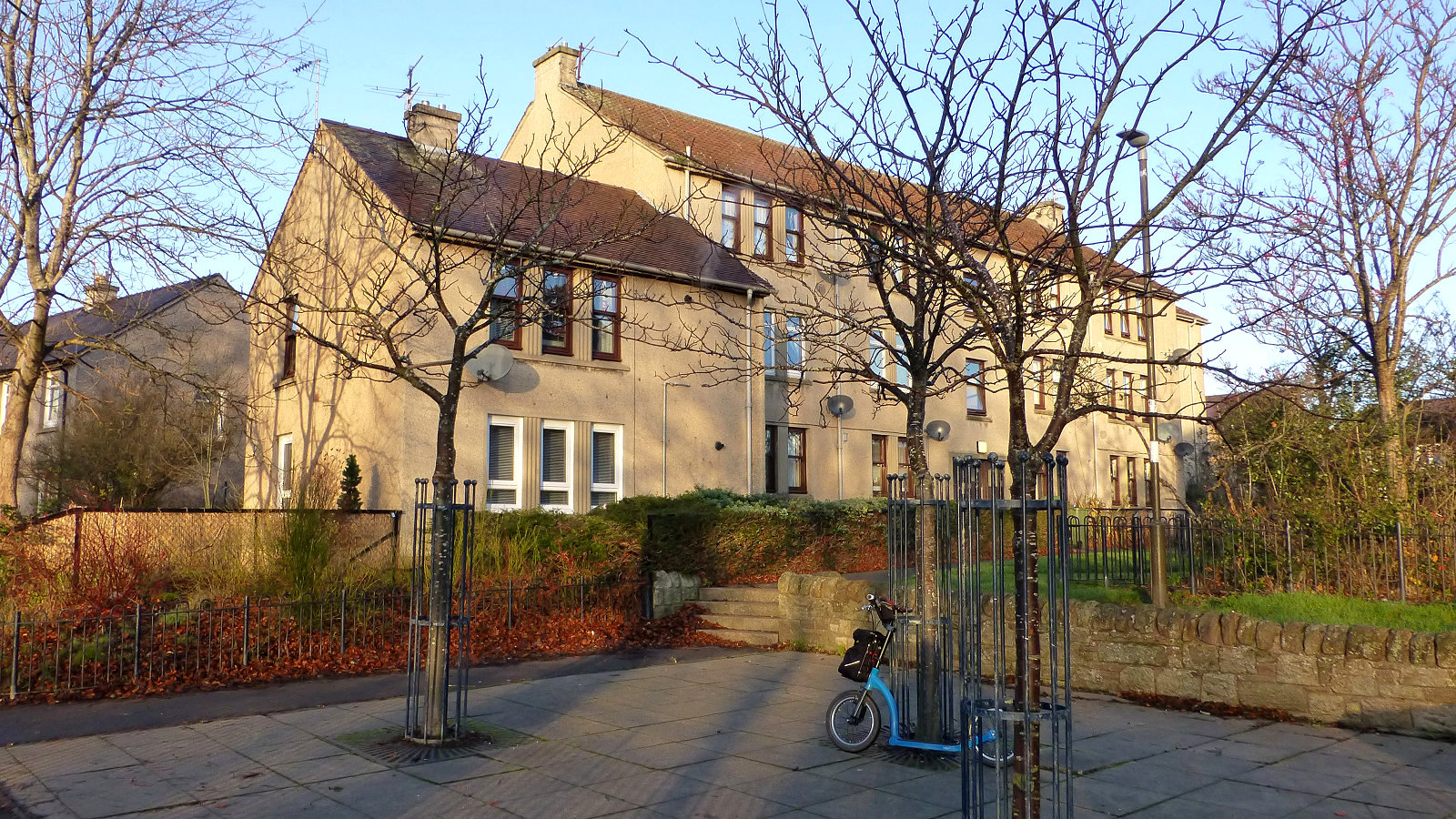 Grabbed some 40 zones today, I think about 38 of them uniques, and I notice most of them taken from turfers CardiffGreenC and Drylaw13, so sorry chaps. No doubt they will be out this evening or tomorrow and take them all back. On a previous visit to Haddington, I’d taken about 10 zones, so today’s efforts have cleared the town of uniques, at least as far as the golf course and Amisfield Garden. There’s still the good run along the River Tyne to West Linton to do, along with the village itself, but that’s for another day. Another 34 uniques in total up for grabs.

Back at base, I was keen to see if I’d completed the day’s assignment for Kalender Turf 2021. The task was to:

“Visit zones whose names contain the letters in the turf name of one of the Kalender Turf organizers (Battigoal, DIProgan, MiniHolger or Olleklunk). The mission is complete when you’ve gathered all the letters in the chosen name. Capital or lowercase letters don’t matter but for duplicates the same amount of letters need to be found.”

Finding it far too difficult to decide which name to go for, I opted to go for them all. To be honest, it was pretty much a long-shot, more a case of keeping my fingers crossed and hoping for the best that I’d take enough zones for all the desired characters, though I would still have the evening to find any missing characters around Bonnyrigg. In the end, I did manage to complete all four names, so well pleased with that. Kalender Turf will soon be finished for the year, which is a shame. It’s been great fun and exciting waiting to see what the next task might be. Will miss it. 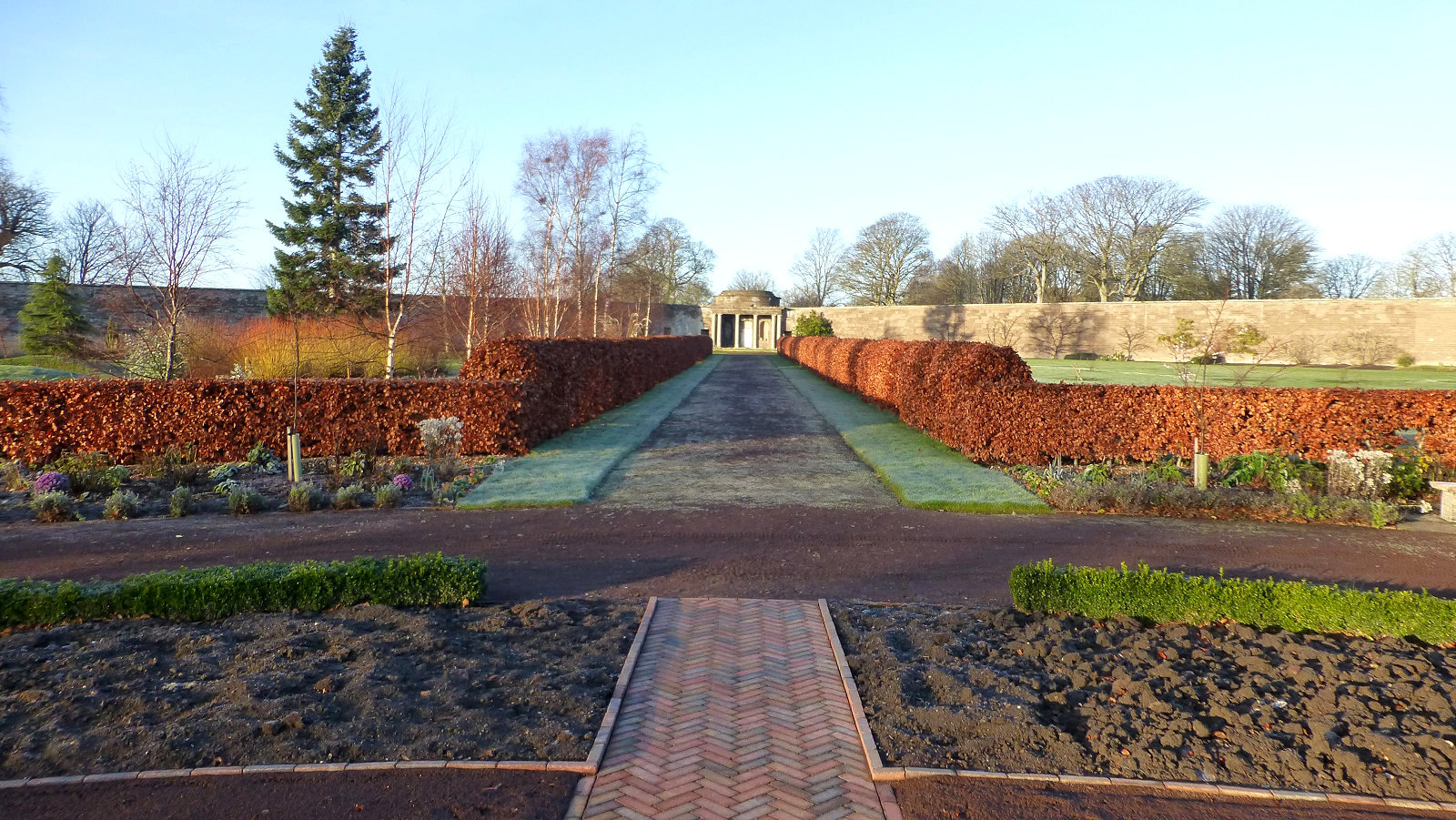 Oh, tried a bit of an experiment today. I used one of the bike lights on flashing mode on the kick scooter. I wanted to see if it makes any difference with people spotting me coming towards them sooner. I got the impression that it did. People were stopping much further away than usual, gathering their dog(s) to them to let me past. Not exactly very scientific but interesting all the same. Will be trying same again at some other locations.

Some good news arrived while I was out scooting. My new folding kick scooter, the Swifty One, has been dispatched and is on its way. Should be here on Monday, or even before, the way deliveries soom to go these days. Just need to give it a quick once-over, bung some Kevlar-based tyre sealant in the inner tubes and it’s on the No 31 into Edinburgh on Tuesday, probably. So, if you encounter someone turfing on a forest green kick scooter looking exceedingly happy and having a great time, it might just be yours truly. And finally, I saw Santa Claus in Haddington. He was riding a great big rumbling Harley-Davidson. How cool is that. I can just imagine the faces of the wee kiddies at the primary school when he rolls up across the playground.

P.S. The Witcher – Season 2, is out on Netflix today. Some binge watching soon, I think.