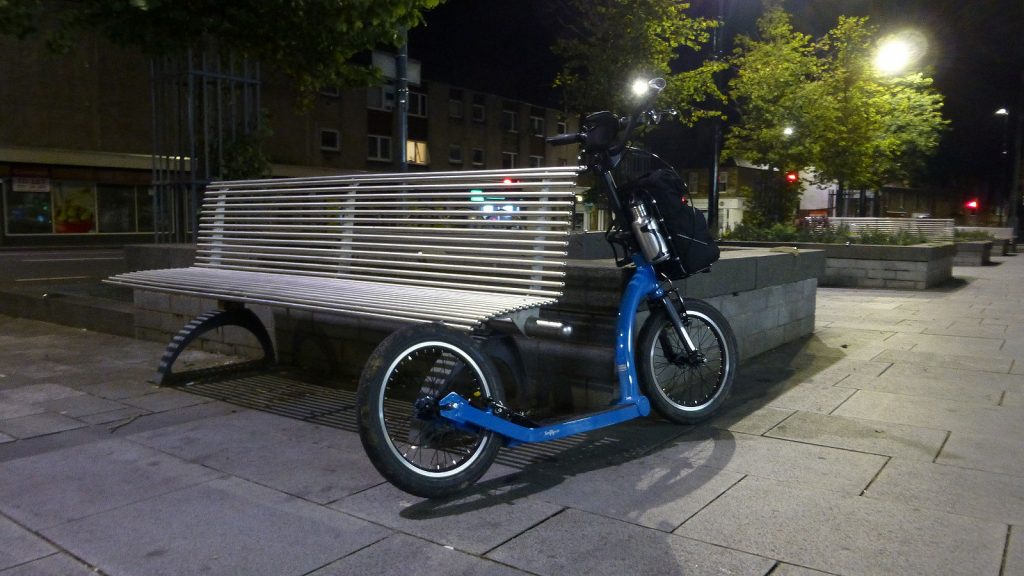 With the weather forecast looking more favourable after midnight, namely no more rain showers, and temperatures on the mild side, I decided a night-turf was the order of the day, or rather, the wee small hours of the morning. Now, getting up around midnight. I’m one of those fortunate people who never needs an alarm clock. I can set my internal biological chronometer and usually wake me around the desired time. This time I was out by 30 minutes, waking at 12.30 am, but near enough.

It didn’t take long to grab my gear and head for the shed. Then the dithering began. It was one for those times when the Indecision Goblin made an appearance. First I couldn’t decide, bike or kick scooter. Should I take the Swifty Air kick scooter, or one of the bicycles, the Surly Krampug or Surly Ogre? Eventually, I decided on the Surly Krampus and wheeled him from the shed. Then, I changed my mind, grabbed the Swifty Air and made for the gate. Better get moving and turf some zones.

You might think that was everything sorted but the Indecision Goblin struck again. Now I had to decide where to actually go. Should I stay local in Bonnyrigg and turf a few zones? Should I scoot down to Eskbank and grab a few there? I just couldn’t decide. I did wonder if I was really out turfing. Perhaps I was still asleep and dreaming through a nightmare? But I finally decided that I could at least take a zone and get started, so quickly scooted around to zone WayOfBaird. Here I noticed it was quite windy and donned my Buffalo wind shirt to keep warm. Taking the jacket on and off would be the norm for the rest of the session. Out of the wind I’d quickly work up a sweat kick scooting but soon get chilled when exposed to the wind.

Okay, what next? I know, scoot up to the cycleway and banish the Indecision Goblin there. Joining the cycleway I spotted a young fox cub sitting a few meters away. It hadn’t seen me and was busy licking its nether regions as animals do, like the family pet does when there’s visitors. I kept totally still and even when the fox looked in my direction it didn’t react to my presence, continuing to lick away at whatever was bothering its nether regions (you know, the icky bit at the back). But I had to move eventually, and when I did the wee fox slipped into the bushes and was gone.

Now, I still needed to go in one direction or the other and finally decided to stay local in Bonnyrigg. Zone WaverleyPark was next, just an easy scoot down the cycleway, turn left and up to other cycleway. Zone taken. Next zone TongueSpatula and I soon worked up some heat kick scooting the rising gradient of the old railway line. So, off with the jacket. At the zone an elderly man walking two terriers. Odd time to be out dog walking, I thought, but then again, who am I to say what is odd? Here I am out turfing on a kick scooter in the middle of the night!

IKnowBroom was next, located in a very dark play park beside the golf course. Then along Golf Course Road (no prizes for guessing how that one got its name) for the King George V Park and zone GeorgeWarMem. At the entrance to the park, something odd. There seemed to be a barrier across the access road. However, closer inspection revealed the likely work of naughty children or teenagers. The “barrier” was multiple lines of magnetic tape from a video cassette or large capacity backup tape. Easy enough to push aside and duck under. The park was deserted, which at this early hour, not surprising.

Quiet streets and equally quiet paths brought me to the Lasswade Centre and High School for zones FreeKick and CatSchool. No children about to heckle me and my kick scooter. No cries of “Gees a shot mister!” Next across the traffic lights for zone ChestersGlare. Initially I thought I’d not even have to look for traffic but all of a sudden two cars stopped at the red light, closely followed by a police car. I don’t know why but I always feel slightly guilty of that unknown something when I encounter a police car or police officer. He gave me the once over but payed little attention.

What brings on this feeling of guilt? Perhaps kick scooting on the pavement? Perhaps that ninja sword on my back to match my turf man icon? Perhaps that “Dirty Harry” Smith & Wesson Model 29 .44 Magnum I carry for protection? Who knows.

“I know what you’re thinking. Did I take six zones or only five? Well to tell the truth, I’ve kinda lost track myself in all this excitement. But being this is a .44 Magnum, the most powerful turf gun in the world, and it can blow your mind clean off. You gotta ask yourself one question, ‘Do I feel lucky?’ Well do you, punk?”*

The oddly-named zone ManyFeet, was next on my night-time mini adventure, followed by zone Bonnyrigg in the town centre. On the way I heard voices, mostly a female voice. Soon three young people came into view, two lads and a very talkative lass. Man, she could talk for Scotland in the Olympics. There was barely a pause between sentences and one lad was only able to give mono-syllable answers such as aye, yea, f**k, b*st*rd, cool and a series of un-intelligible grunts. The other lad was smoking what I can only surmise is a spliff, if that is the correct term (gleamed from watching too many episodes of Police Interceptors). To be honest that is only a guess from the unusual smell. I didn’t stop and ask them.

Then an easy downhill back to the house, first RobinAndTuck, followed with PisaForest, LadyMarion and a final pair of zones along the burn, Brixwold and Pittendriech. Overall, 15 zones in total and my Five-A-Day completed before the sun rises above the horizon. With the Five-A-Day you need to be careful of the timings. The daily cycle for the Five-A-Day follows Coordinated Universal Time (UTC), i.e. midnight to midnight. The UK is in British Summer Time which is one hour advanced, so 1.00 pm to 1.00 pm. Better safe than sorry! Back soon.