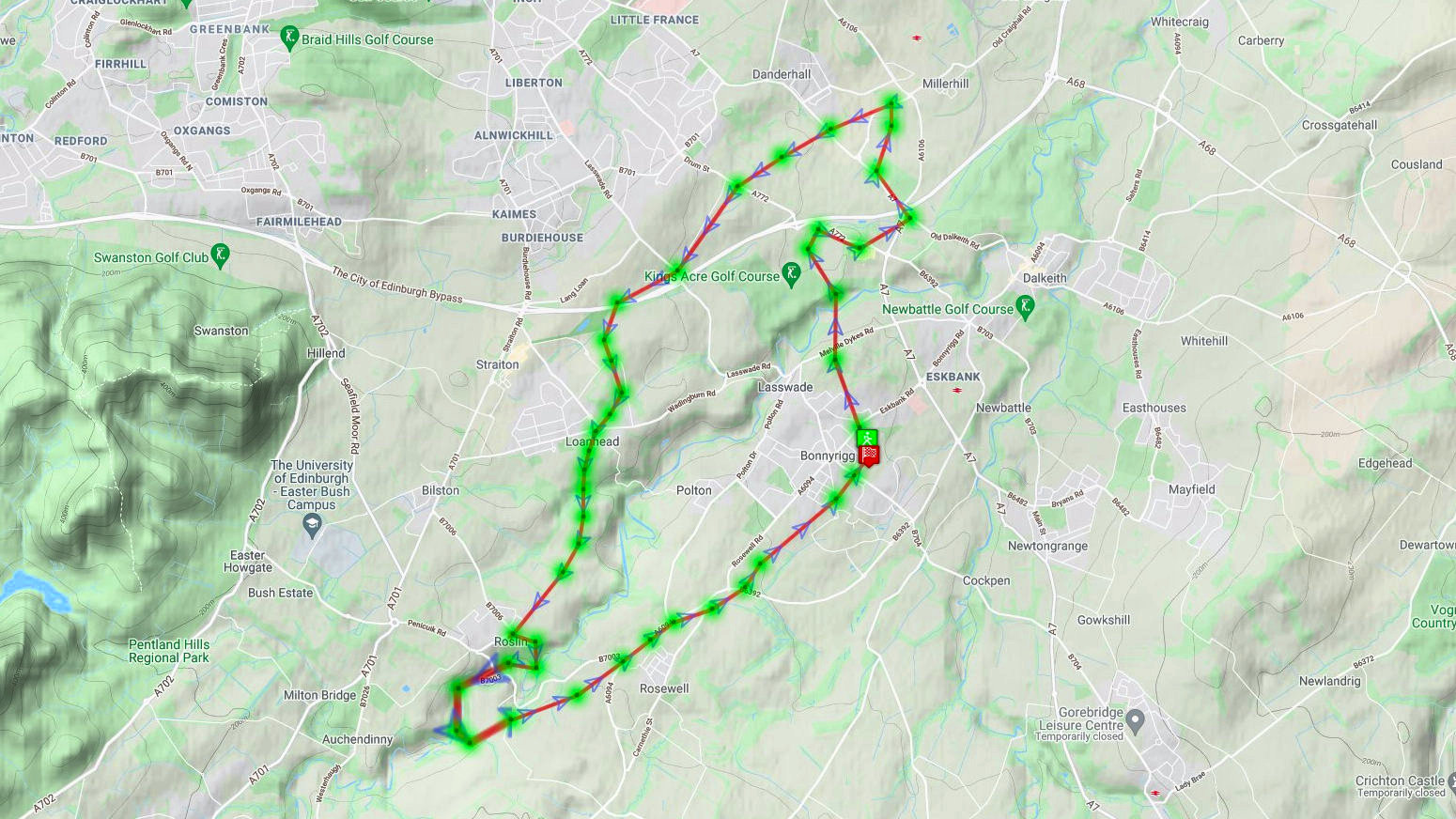 The day-time weather forecast was for Scorchio, with a capital S, and has been for a good few days now and looks set to continue, at least until the coming weekend. Temperatures in the mid-twenties’ might suit some people but not me. I much prefer the cooler nights when the temperature drops to more comfortable levels. Perfect for turfing on a kick scooter. But where to go was the question?

To make use of the clement night weather while it lasts, I wanted a nice long route for the Swifty Air kick scooter, and also needed 25 more zones to get that hard-won Take-5000 medal. It didn’t take long to decide on the Roslin to Shawfair route which was almost entirely off-road, always a good thing. However, just for a change, I decided on an anti-clockwise direction this time. I usually go the other way and benefit from the long 5-mile downhill railway line cycleway from Roslin to Shawfair. Anti-clockwise is most definitely the wrong way round and offers a nice challenging uphill scoot to boot.

Leaving the house around 12:30 am, I headed first for Broomieknowe Golf course, picking off a few zones along the way, then dropped down past Melville golf club driving range, round the golf course and onto the woodland path that leads down and over a new footbridge to Melville Castle hotel. Just before I entered the woodland, I noticed what I thought was a rabbit watching me in the far reaches of my scooter light. As I approached closer it turned out to be a young fox cub. It wasn’t much bigger than a small Yorkshire terrier and obviously this year’s litter. I was amazed that it didn’t run away and was able to get with around two meters. Even then, I had to tell to run away. Which it didn’t. Go on, bugger off, worked though. Cheeky little devil.

I nipped along to the hotel for zone SpotTheDog, then out along the entrance road and onto the dirt track that would take me to the two zones on Melville Grange farm. It was very still and quiet. Other than a few taxi cabs and articulated delivery lorries doing the night-run, I was the only one out and about. Not too surprising at Silly O’clock. Even the Turf app was clear of any turfers, even in Edinburgh. Thought there might be a someone out turfing. However, one might not be truly alone when turfing, as there will probably be someone out there watching you on their app, even if their turfman icon isn’t showing. So best not get up to any mischief.

Next zone was KaimsGlacial, now well overgrown since my last visit here. The vegetation was head high but still passable with care. Just watch out for the ankle-ripping brambles and stinging nettles. The track surface itself was mostly dry and hard packed, so good easy scooting. This being tick season, a wise turfer will always check themselves for the little blood-sucking blighters after traversing this type of habitat. I expected to have picked up at least one but a thorough check later revealed nothing. Thankfully. Once you get one you feel icky for ages afterwards.

Shawfair brought me to the start, or end, depending on your direction of travel, of the Roslin-Shawfair cycleway. And thus begins a five-mile uphill kick scoot. Actually, it wasn’t too bad. None of the usual two-kicks-forward-one-kick-back Westerly headwind to speak off and plenty zones to stop and get a wee breather at the same time. Having said that, by the time I reached zone BilstonGlen, I was dripping with sweat, despite only sporting short shorts. And BilstonGlen offered up a nice surprise, my Take-5000 medal popped up on the phone screen. Nice one. Just another 2500 takes until the next one!

The cycleway has streetlights along it entire length, though the stretch between the Gilmerton road and the A720 underpass was out for some reason. The street lights that were working revealed good numbers of bats hunting insects around the lights. Other wildlife included a tawny owl. It had been sitting on post and I totally failed to notice it until I reached it and it flew away. I just wish I’d been paying more attention. Will do next time. Some benches at RoslinWarMeml zone was an opportunity for a rest, and a drink. Still very quiet with nothing disturbing the silence other than the Lothian Buses N37, which was totally empty. Other than the driver, obviously.

Now the most annoying part of the journey, having to drop down to the River North Esk, and then climb all the way back up again onto the Penicuik to Dalkeith cycleway on the opposite side of the valley. Yes, and steps down and more steps up again. But it wasn’t all wasted effort as there’s five zones for the taking along the way. Again, still very quiet. Only the gentle flow of the North Esk heading for the North Sea at Musselburgh and the faint whisper of leaves in the trees.

Oh yes, I almost forgot. The squeaky hinge sound. You might encounter this if you stop and listen in woodland at this time of year. The sound is exactly as described, just like a squeaky door hinge. It’s very difficult to see the source of this sound but you might be lucky. The culprit is a young long-eared owl calling to be fed by its parents. Some say it’s the call of a banshee but some people have fertile imaginations. I wouldn’t know anything about that.

The railway line had me heading for home, along with a few zones as well. At the big roundabout at Rosewell, voices broke the silence. Soon I noticed someone wearing fluorescent clothing standing beside a scooter. My initial thoughts were that he’s had an accident but it was only a puncture and the man was waiting on his wife to collect him. Not sure what they were actually going to do mind?

With the final stretch of the route all downhill, it was an easy scoot home, picking off a few more zones in the passing. A most enjoyable night’s turf -scooting with 45 zones added to the total and the Take-5000 medal added to the collection. Mr Dodgy Back was hinting enough for now but nothing that a day’s rest wouldn’t deal with. One final note. While climbing over a gate, the Swifty fell over and broke one of my Knog Blinder Road 400 LED lights. Most annoying. I tried to fix it later but no luck. A good example to show that always having two lights is a good idea. Luckily I had a spare in the bike shed. Back soon. 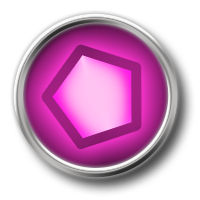 Take-5000 – This medal is distributed as you perform 5000 takeovers in total.