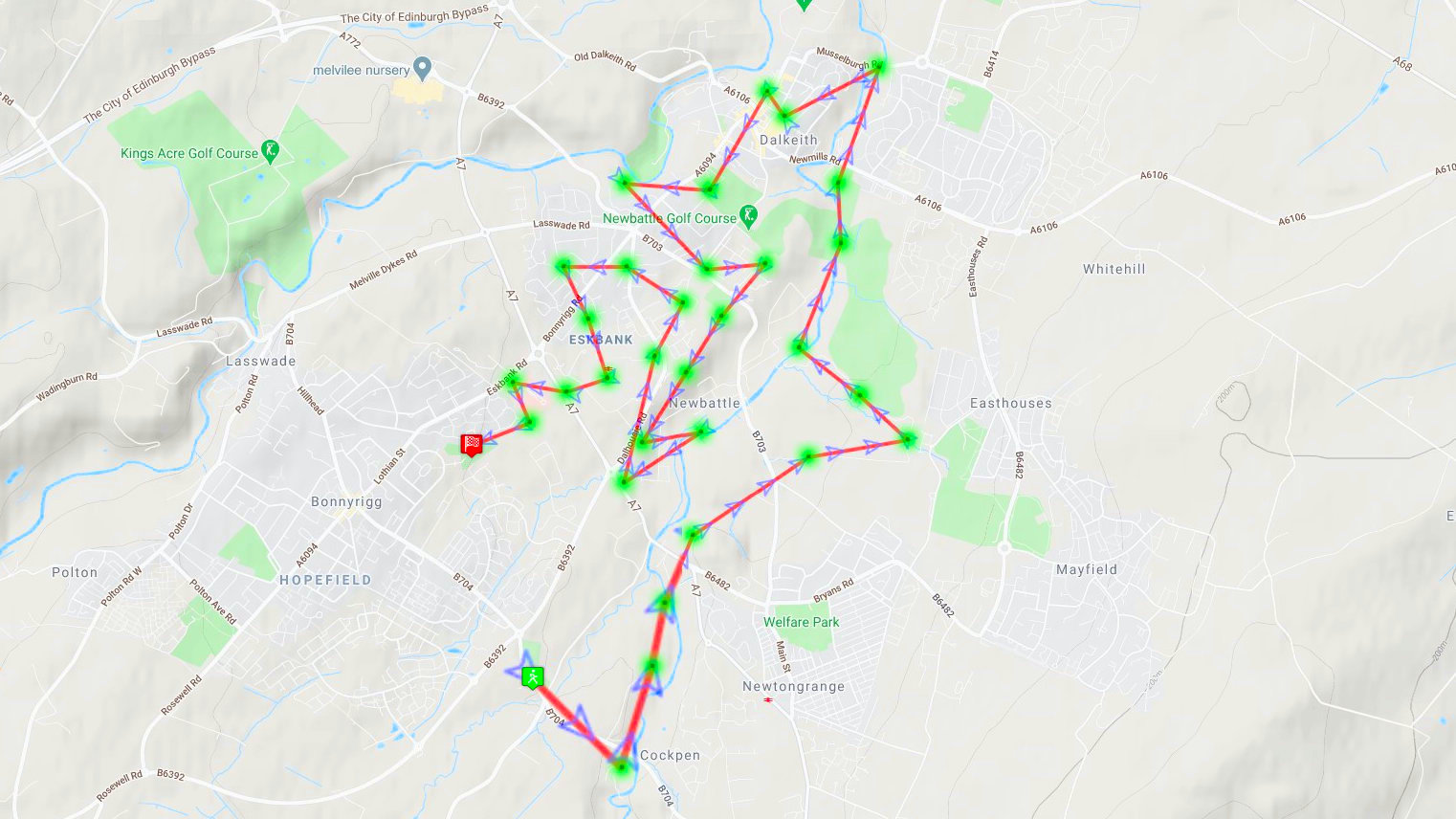 A chilly -2 Degrees C., start to the morning, saw me togged up with multiple layers topped with my favourite Alpkit duck-down jacket and with recent snows having melted and frozen overnight into a mixture of crispy snow and slick ice, the Surly Pugsley was the bike for the Turf round today. My plan was to take some of the local zones lost over the past week or so.

First stop was KirkCockpen, at Cockpen Church for a revisit and 93 points, then along the busy B704 and down the icy entrance drive to Dalhousie Castle for the first proper take of the morning, Dalhousie (185 points). Then an about turn, back up the slippery drive and along the dirt and frozen pot-holed road to take GroveFarm, also for 185 points. So, all going well so far. 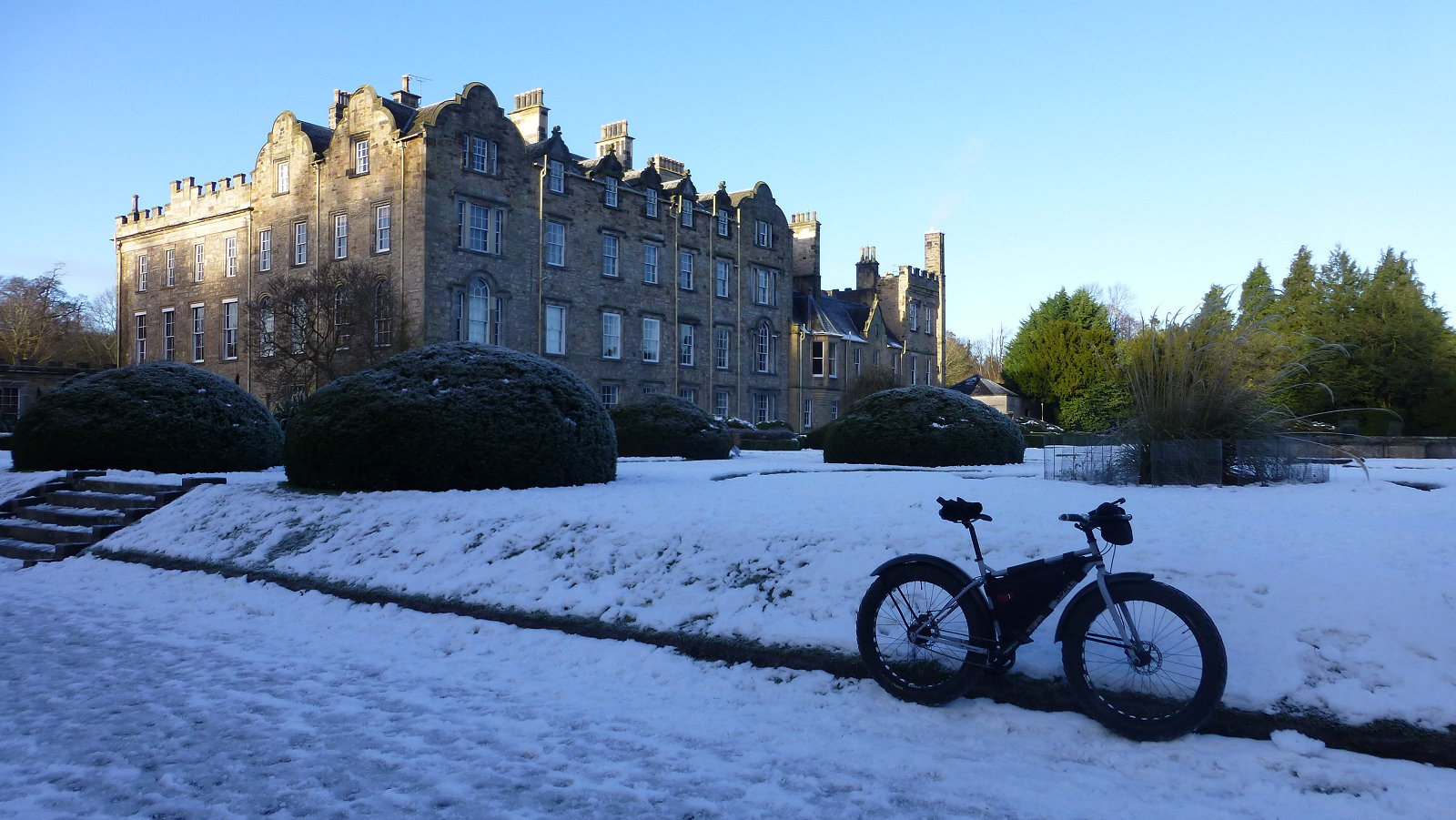 The trail leads down a narrow track beside a tall stone wall, and it was while trying to avoid slipping on some sheet ice that disaster struck. The first inkling was a strong tugging at my left arm, followed immediately by a horrendous ripping noise that was quickly followed by a large puff of white duck feathers. I’d caught my Alpkit duck-down jacket sleeve on the thick stem of a dog rose, the sharp spines ripping through the jacket in half a dozen places, feathers spewing everywhere. I was none too impressed I can tell you and the air with blue with a few choice words.

Anyway, what is done is done and cannot be undone, so onwards, leaving a trail of white duck feathers in my wake, I rode past the weir at the old hydro power building to take ByEskWeir (185 points), under the Newbattle Railway Viaduct, across a strangely quite A7 road and into the woods to join the Lady Lothian Walk that would eventually lead me to Newbattle Abbey. TheRedWoods was the next zone for the taking at 170 points. 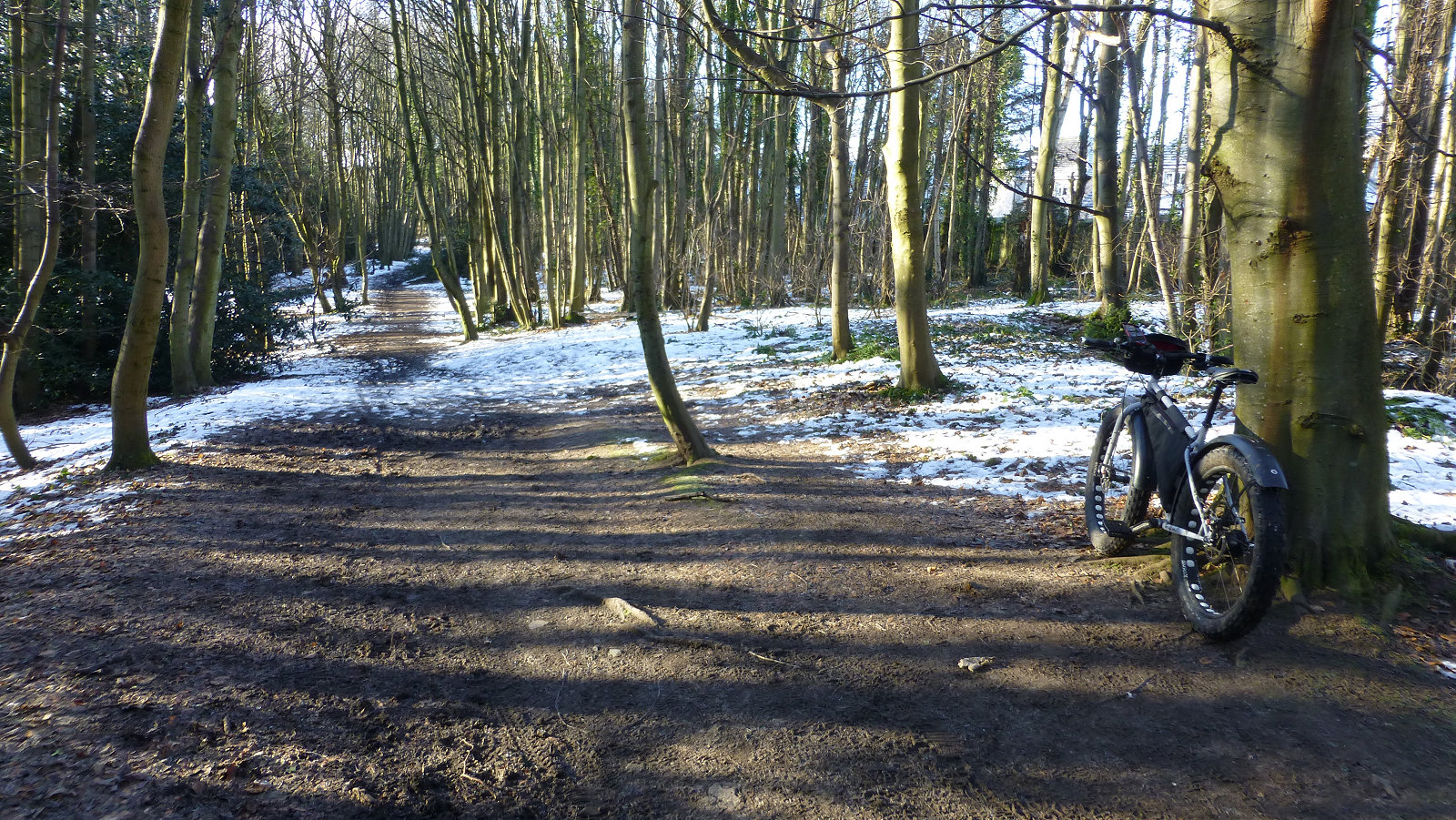 The path runs through very pleasant woodland, the bright blue sky a welcome sight though most of my attention was on the trail in front of me, looking for the best line that offered the most grip while avoiding any sheet ice, particularly when changing direction. The tyres on the Surly Pugsley, actually called Larry, are about 100 mm wide and offer amazing grip but anything but sheet ice.

Next zones to fall to me and Pugsley was TheSouthPath, followed by Mary when crossing the Mary Burn, both offering up 185 points each. This next stretch of the trail, other than in very dry summer weather, is usually very muddy but was mostly frozen hard today and while bumpy to ride across was much better than slithering through thick glutinous mud. 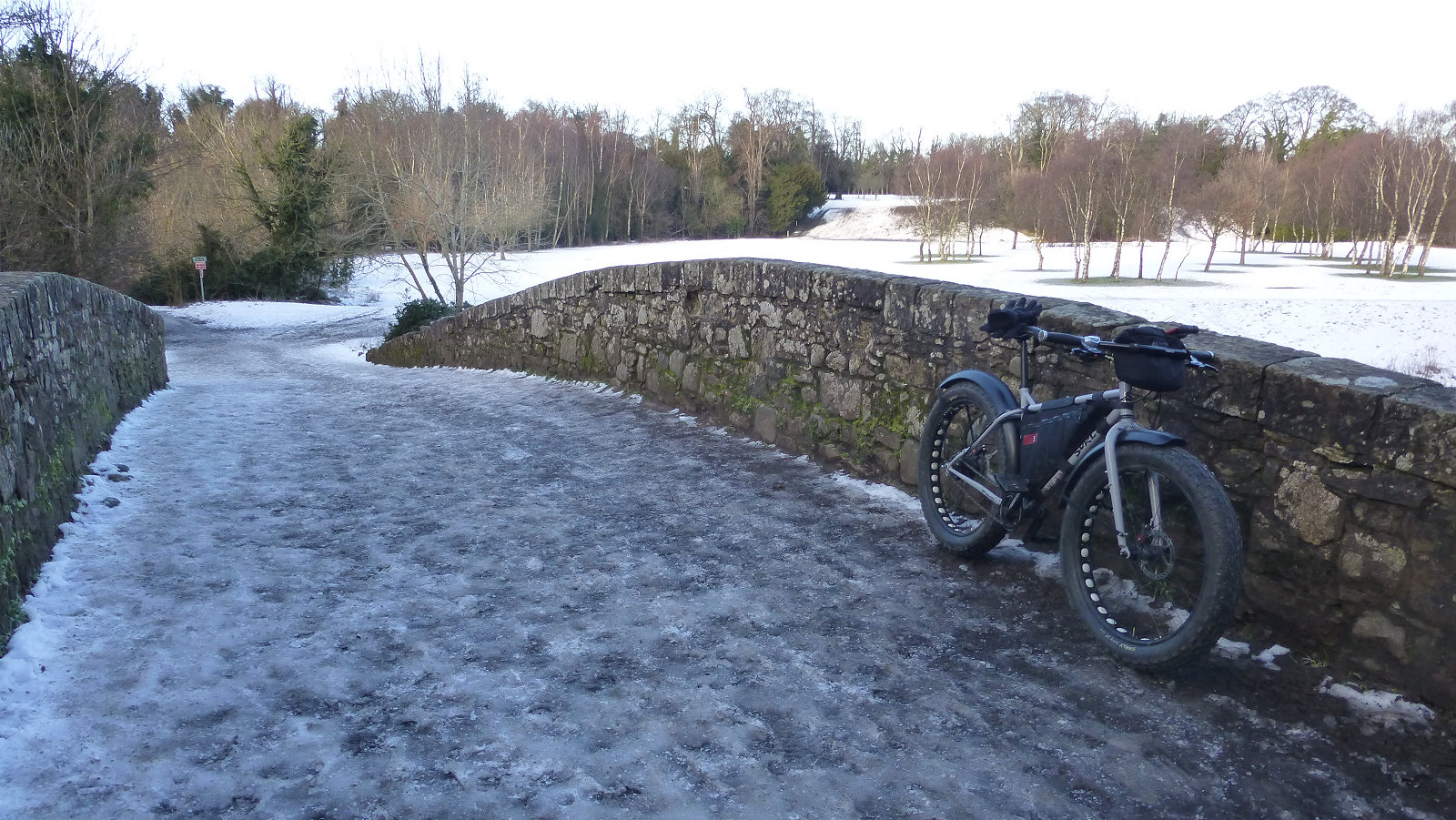 From here it was an easy downhill to Newbattle Abbey, taking TheNorthPath (185 points) on the way. Quite chilly going downhill in such low temperatures, the body no longer generating any heat from pedalling but the drop downhill is fairly short and I was soon on level ground and pedalling again, taking BattleAbbey (185 points) located beside the gardens to the rear of the main building.

Heading downstream and ticking off a few zones that are fast becoming very well-known to me, including SouthEsk, Peppermint and The Guitar, all each with 185 points. Next, I wondered about heading into Dalkeith Country Park, but time was limited and I would not be able to do justice to all the zones in the area. Again, something for another day. Instead, I headed through Dalkeith, taking SayAhhh (185 points), HolyBuccleuch, WhichKing and EskPath, each for 170 points, with Beatles for 155 points, before heading off-road again and into the frozen woods. 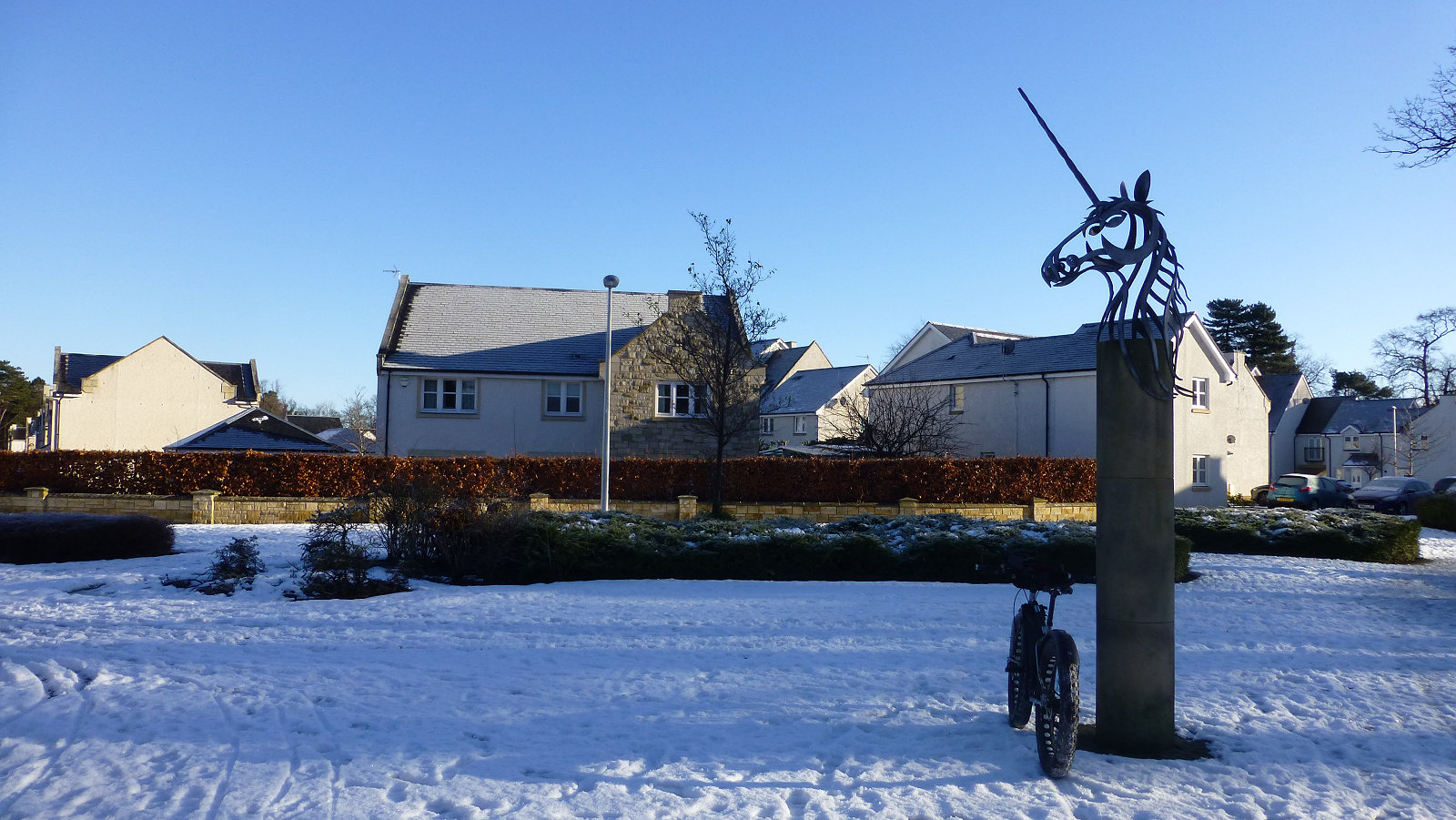 At BattleForrest something looked different. My usual route had changed and some fallen trees now blocked the path through the trees, however, the GPS was still able to tag the zone and another 170 points added to the total. Newbattle, RecentBattle, OldBattle (170 each) were next to fall, with AncientBattle slightly better at 185 points. I rounded off the Newbattle area with another 185 points for StoneGate.

Now it was a case of taking all the Eskbank zones and a few zones local to the house, starting with CollegeZone, BikeSlooowly, Strawberries, WitchTakeOff, Hardengreen, Eskbank and A7View, all for 155 points each. A final three zones were Slytherin, Wishart and WaverleyPark, this time for 185 points each. Interestingly, as I write this page later in the evening, most of the zones in Eskbank and Dalkeith have already been re-taken by other turfers. Still holding on to the off-road zones around Newbattle, at least for a wee while longer. No doubt that will be gone soon enough. 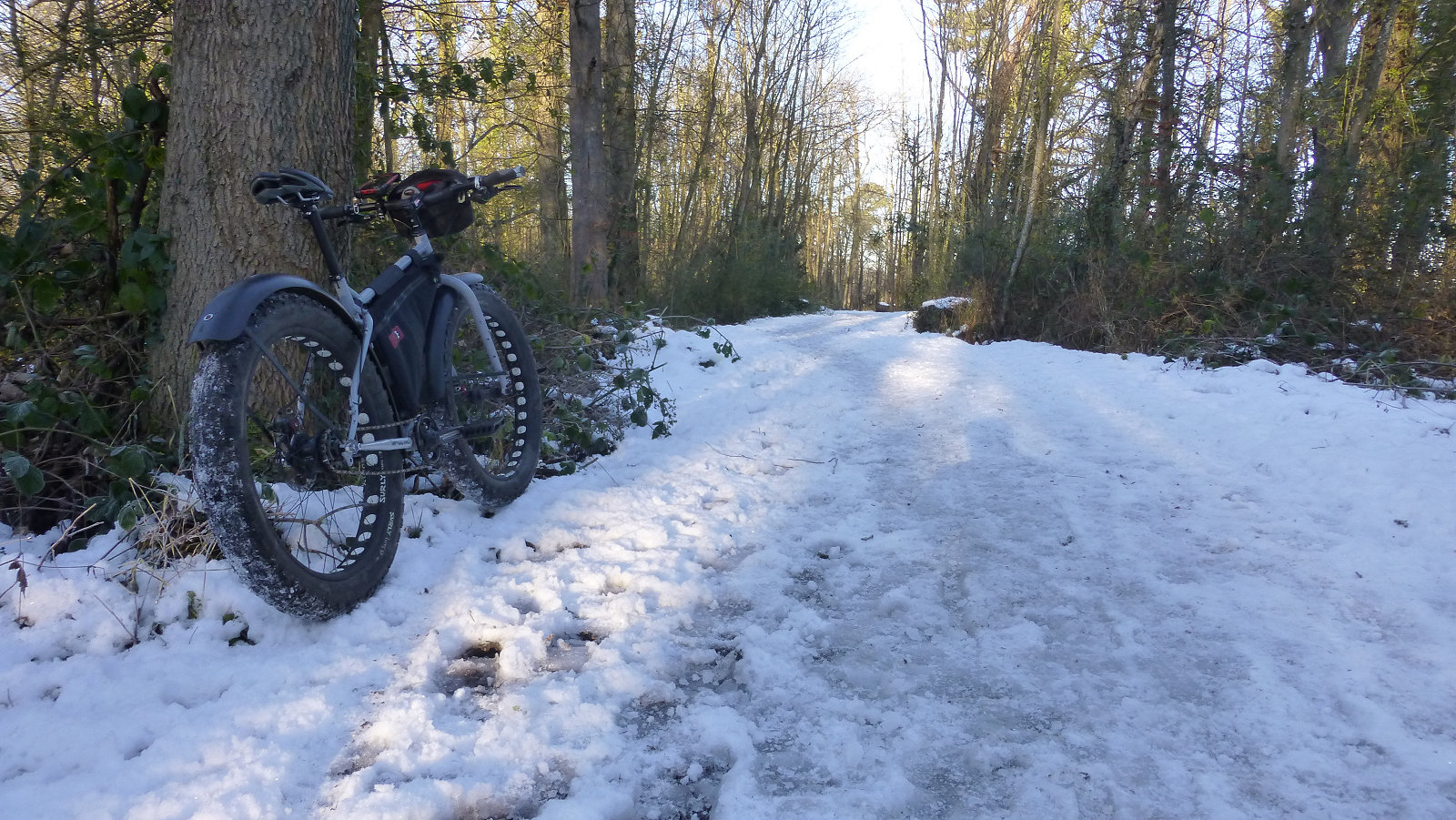 Other than ruining my jacket, it was a most enjoyable day. Rank was now Rank 21 – Novice Seeker, points for the round was sitting at 74,800 and my overall total was 119,000. And what could be better than being out in the Great Outdoors, riding my Surly Pugsley fat bike, braving the sub-zero temperatures and playing Turf? Well, it would be nice if it was a bit warmer for a start. Now, time to start looking for a new jacket. I guess there’s always a bright side to everything.

Before we finish for this page, there a final point I want to mention. The lure of taking just another zone, and another, and another, can be very tempting and I found this on my turfing trip to the Musselburgh area the other day. After taking zones in the town, you notice other zones near the next town, Cockenzie and Port Seton, and take a few. Soon, you find yourself some distance from home, totally knackered and a long cycle back home. Just something to keep in mind, perhaps planning more circular routes rather than linear ones.