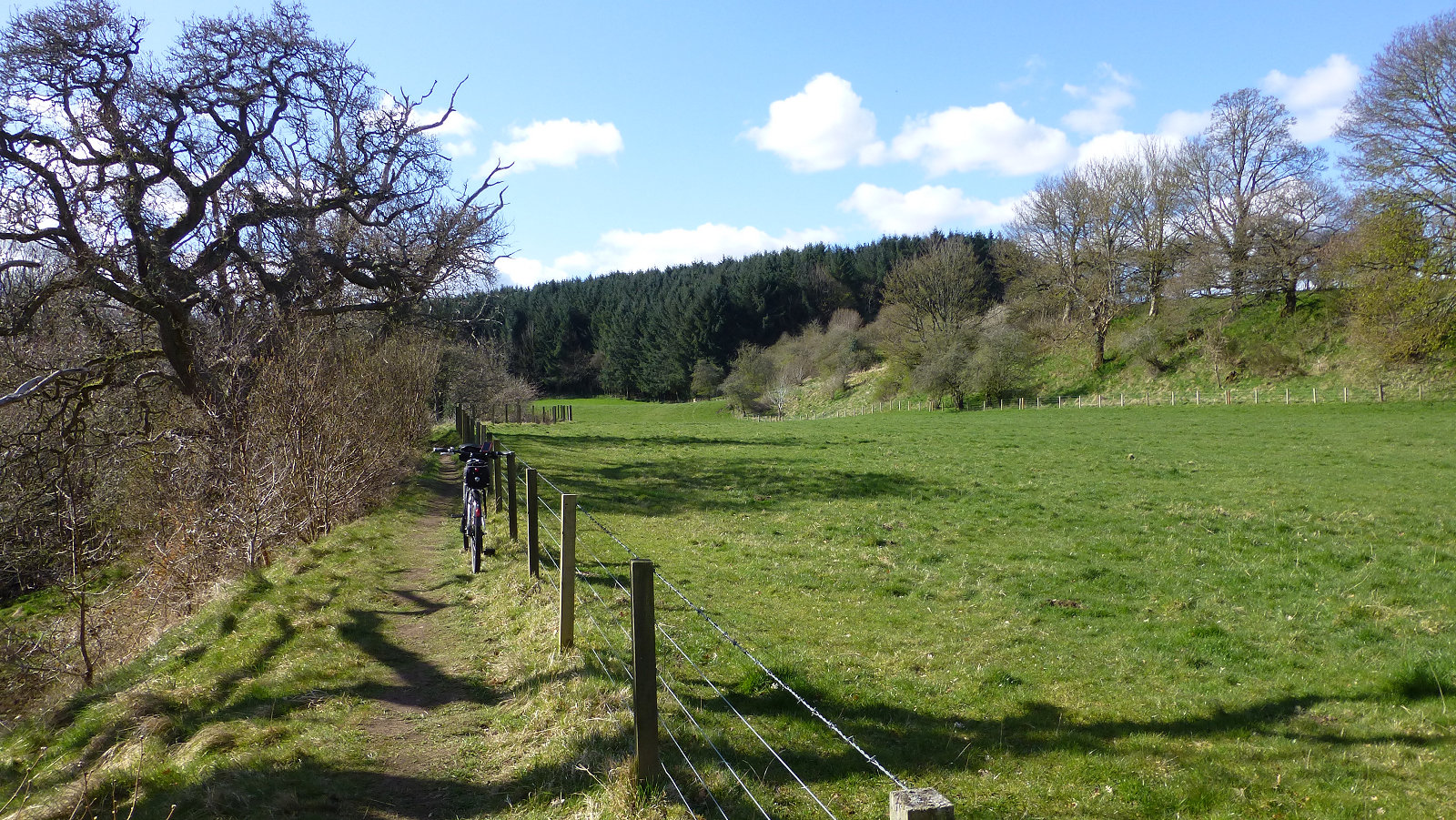 Still somewhat restricted in my ability to turf using either bicycle or kick scooter, or even walk very far for that matter, since my encounter with the Very Despicable Pulled Muscle in the Back Goblin while undertaking the highly dangerous removal of a single little plant at my parents’ house a couple of weeks ago, I’m sorely in need of something different to turf/blog about. This morning, I wracked by poor old brain for ideas and finally came up with something. That something is turf-birding, combining turfing with birdwatching.

The idea was to visit a few zones locally, to keep up my Five-A-Day, and to spend a few minutes at each and see how many different species of bird I can record. Not being able to walk very far, I decided that the woods and trails around Dalhousie Castle would be ideal. Not too far to walk from the house and within the capabilities of aching back as well.

Zone KirkCockpen
Rather disappointing regards bird life this morning. The place is usually busy with small birds, like goldfinch, bullfinch and lots of tits, both great and small. Even the usual fieldfares and redwings were absent. One woodpigeon flew past overhead at a rate of knots and a single gull glided past to the south. I’m not good on gull identification at the best of times, and gulls silhouetted against the sky are often impossible anyway. One good spot was a jay across the road, first heard squawking, then spotted through the binoculars.

Zone DeanWoodTurn
The next zone was in the woods beside Dalhousie Castle. Lots of little peeps and chirps coming from the trees but nothing I could get eyes on, let along identify. Was able to tick off a wren when it started scolding me from a nearby bush. Not actually seen but readily identified by its distinctive call. Same for the nuthatch I heard high in the canopy.

Zone DeanWoodPath
Continuing through the wood following the burn, a small troll bridge marks the next zone. Again a few peeps and chirps coming from the trees but nothing in sight. At both this zone and the previous I encountered dog walkers so not surprising that there’s few birds about. Did hear carrion crows calling in the fields to the north west.

Zone UpperDalPath
Things were looking good as I approached this zone, located at the edge of a field, with three buzzards soaring above. However, they were lost from sight by the time I reached the zone. Bugger, those would have been a good tick. Noted one jackdaw doing a flyby, a flock of seagulls spiralling above the recycling plant, half a dozen carrion crows feeding in the stubble and a single magpie vanishing into some conifers. Also spotted something interesting at the far side of the field, though at the limit of visibility even with my Leica 8 x 20 binoculars. Looked at first glance to be a sparrowhawk coveting a kill with its wings, which would have been a great tick on the list. However, I was most disappointed when I realised it was a black polythene bag flapping in the wind.

Zone DalhousiePath
The next zone is also located on a field boundary. Not much in sight initially but after a while I could hear a robin singing in the woods to the south. Could also hear some faint peeps from the stubble but could see nothing initially. These later revealed themselves as two yellowhammers. Two separate pairs of carrions crows flew past and a third pair which I initially thought they were also carrions crows but turned out to be ravens, their distinctive deep croaking call giving the game away.

Zone WatchTheMud
This next zone was quite a challenge to spot anything initially, being situated on a track and surrounded by open fields. A hedgerow offered up a few peeps and chirps but again, nothing visible. A wren was heard calling as was a goldfinch, its distinctive tinkling call is quite diagnostic. A scan with the binoculars produced a mixed flock of over 80 crows, including jackdaw, rook and carrion crow, all feeding on the newly planted cereal crop. A dozen magpies were also in attendance.

Zone SouthEskAside
Down to the river for this next zone but very little to report. One lone gull too far away to accurately identify, a woodpigeon flew directly overhead then swerved away once it saw me and a blue tit calling from an oak tree.

Zone MillHolm
Back into the woods for zone MillHolm and again any chance of spotting anything spoiled by two different sets of walkers. The first were a young couple who were pleasant enough, the second was a dog walker with a very large long-haired Labrador, which came rushing at me barking loudly and with teeth bared. It came right up to me and only stopped about a foot away. To be honest it came within a Nano-second of getting kicked with a size 9 Karrimor boot. He just makes a lot of noise the owner said. It’s my son’s dog and I don’t understand why he does this, he added. I’m going to stop being so polite and reserved and actually say something next time I’m in a similar situation. Leaving the zone, I was somewhat annoyed but heard a dipper singing on the riverbank, which helped calm me down.

Zone WitchesHouse
The stone folly at a bend in the river is zone WitchesHouse. Lots of invisible peeps from the trees, another wren calling from the vegetation and a real highlight, two dippers flying downstream at high speed calling to each other. Nice one.

Zone Dalhousie
The last zone of the day is found in the parking area at Dalhousie Castle. Two different wrens scolding me here, one on either side, then a gull flying overhead followed by a woodpigeon. Then some amazing sights, one after the other. First kestrel, then peregrine falcon, Harris hawk, golden eagle, buzzard and an eagle owl. All amazing ticks but unfortunately not allowed as they were at the Dalhousie Falconry centre.

It was nice to try something different for a change and I will try this again, though I think perhaps spending more time at each zone would produce better results, say 5 or 10 minutes, or even the duration of the “block”, around 20 minutes. Might also be worth trying at night, noting what can be heard rather than seen. Until next time.