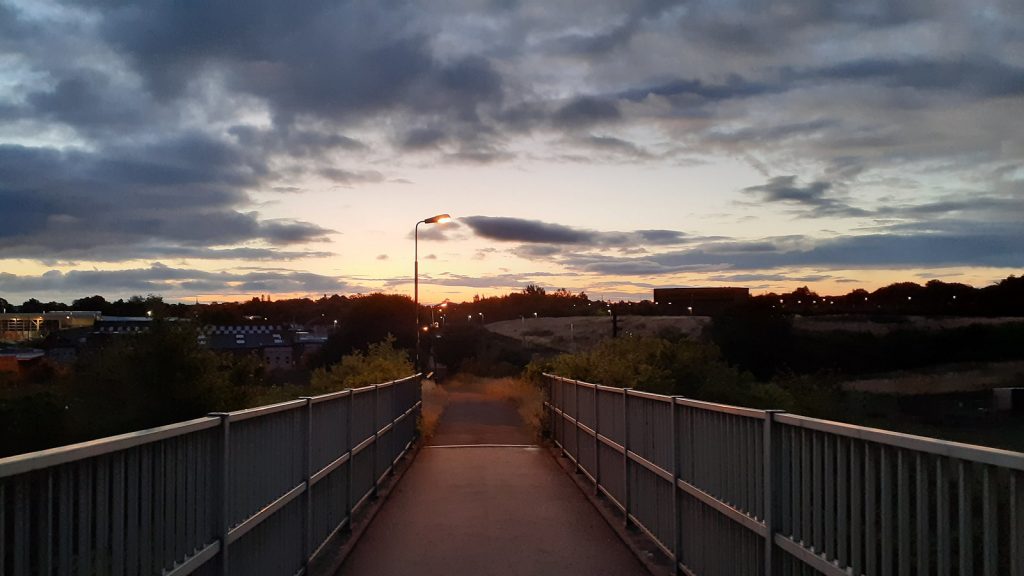 Some people, and one might say sensible normal people, when they wake up bleary-eyed at 4.00 am in the morning, will peer at the glowing green LED numerals on the beside alarm clock, utter a four-letter swear word not unlike that Spanish clothing brand FUKC, grunt, then turn over and go back to sleep. Other people, who are, perhaps, not so sensible, get out of warm cosy beds, rub the sleep from their eyes, check their mobile phone, yawn, visit the toilet, don athletic gear, grab a bicycle or kick scooter and then go and dash around town or country looking for virtual and invisible things called zones. They are sometimes taken as being slightly crazy, definitely daft and even mildly eccentric. They are generally known as turfers.

And that was me this morning, the latter of the two types of people, making me very slightly crazy, most definitely daft and happy to be mildly eccentric. Yes, out turfing on the Swifty Air kick scooter at first light, zipping wearily around the deserted and lonely streets of Eskbank and Dalkeith, picking off a few “reds”, stealing them from other turfers, scaring the street cats and running the gauntlet of the gang of herring gulls that seem to hang out on Dalkeith High Street surviving on take-away leftovers and raiding over-full litter bins. Have you ever been really close to a herring gull? Well, they are bloody enormous and bold as brass. Everything about them says, Velociraptor inside watch out.

My main aim this morning was to get my Daily-Five. And today was day 319 out of 365, so with only 46 days to go, I’m getting ever so slightly stressed with the thought that I might miss a day and have to start all over again. Not that I suspect I would, I might add, start again that is, or miss a day, for that matter. So, I like to get out early, if possible, and get those five crucial zones safely in the bag. Then I can relax for the remainder of the day. I have this fear that if I leave it until later in the day there’s more chance of forgetting, as life events pop up and take your time away from you. But, fingers crossed, I’m still in the running. At least I hope so. Then there’s the thought about what happens after day 365, when that cherished Daily-365 medal has been added to the collection. What am I going to do then? I’ve not heard that anything else similar is in the pipeline but, fingers crossed, you never know. Mind you, might be nice not to have that daily burden. Just a thought.

It was a different quiet this morning around 4.00 am, at least when compared to my usual nocturnal turfing in the hours between midnight and 3.00 am, when there are usually still late-night drunks making their way unsteadily home or loud-mouthed youths getting up to mischief. Sunrise wasn’t far away – 5.04 am according to the Met Office weather page – so it was already getting light and the world was beginning to face another Monday. The local denizens of the night were still abroad, rabbits doing what rabbits do, cats out hunting for small furry creatures and even the odd bat was still out flittering along the cycle path hunting moths. No people about yet, and traffic was few and far between. Of course, having the place to yourself has its benefits. No need to wait at traffic lights to cross the road, no pedestrians on the pavement to avoid and no dogs to be wary off. Yes, good to be alone, other than the myriad of CCTV cameras watching on every street corner, and from just about everywhere else as well. And when you are out turfing zones you know like the back of your hand, you have plenty of time to for your thoughts.

My thoughts this morning was mostly about whether I should purchase that drone I’ve been droning on about these past few weeks, if you will excuse the pun. The drone in question is a DJI Mini 3 Pro and at £1000 for drone and extra batteries, that’s a fair chunk of money to spend. I’m trying to decide if the footage I can create with the drone is worth spending that money. And you also have to carry it around with you. But having said that it only weighs 249 grams, measures 145×90×62 mm folded (about the size of my Observers Book of Birds, Observers Book of Birds’ Eggs and Observers Book of Scottish Goblins, stacked together) so not really an issue, be it walking, or cycling, or kick scooting. I’m still undecided on this one but will probably buy one eventually.

I’ve spent many an hour online researching the DJI Mini 3 Pro and found loads of technical information but very few videos of anyone actually creating something with the drone. Yes, plenty of short-term and long-term reviews, tips and tricks by the dozen, why you should or shouldn’t buy this drone, boring unboxing videos by the hundred, what it can and cannot do, and so on. Just wish there was more stuff online similar to what I want to create. Makes you wonder if they are any good for actually creating stuff and if anyone actually does?

Okay, enough droning on. That’s it for today folks. Loads of ideas for turf trips, blogs and videos in the pipeline but all dependant on time, and tide, and weather, phase of the moon, the availability of rare four-fingered Chunky Kit-Kats, and so on and so forth. I’ll be back soon with more adventures on Planet Gary. Bye for now.