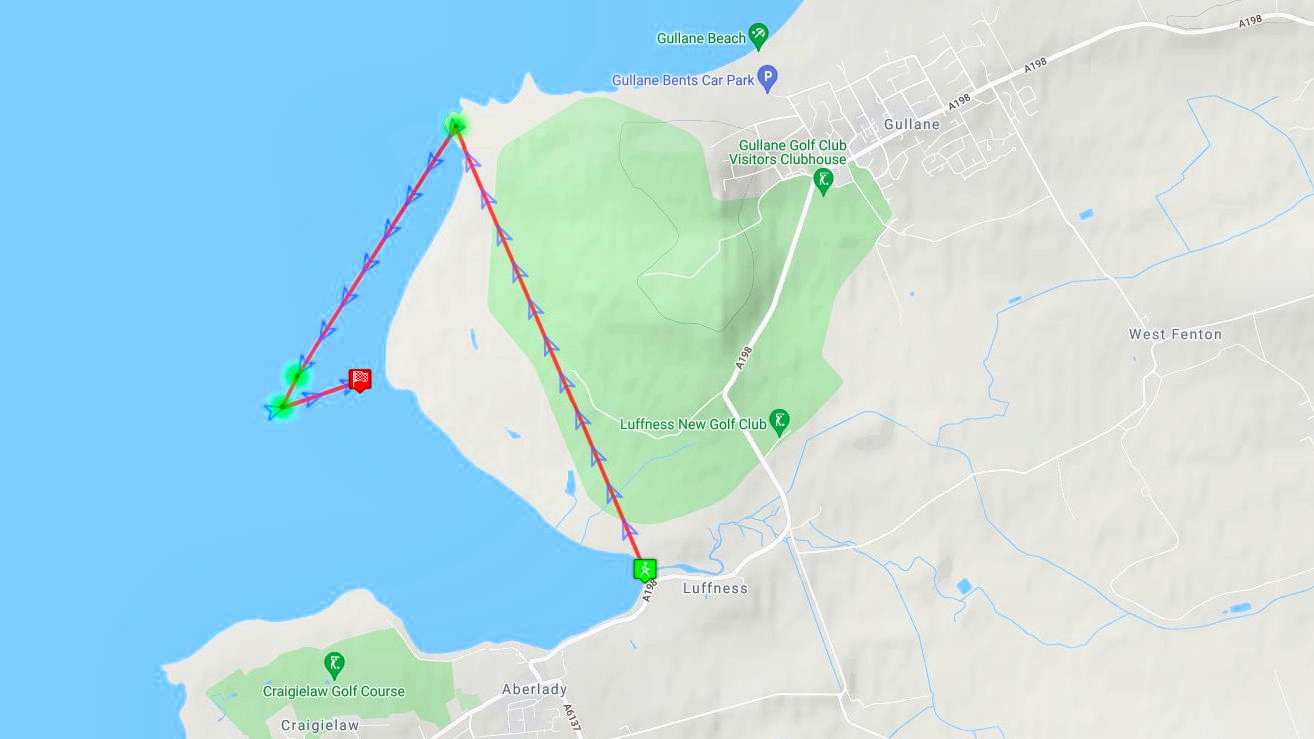 My return visit to Aberlady Bay Nature Reserve this fine evening, was mostly in the hope of getting the same moon-lit misty landscape witnessed on my previous visit, but cloud cover pulled a blanket over that idea. However, despite there being no visible moon, all was not lost. There was a new zone on the beach, TheOldMan, located out on Gullane Point. Coincidentally, I was thinking yesterday of suggesting more zones out here and The Old Man, a large rock outcrop at Gullane Point, was top of the list. Someone must have been reading my thoughts.

I was holding off posting any further zone requests as many of my previous requests have not been acted upon. I’m not sure the reason for this, perhaps we have too many zones already, or the zone makers are busy adding zones in new areas for new turfers, which is fair enough, and have posted a question on the forum asking for some feedback. Pending a reply to my query, a new zone in the area was good enough reason for another visit. I also wanted to get some night photographs at the midget sub wrecks, and the general area, for the blog. I actually took the camera with me the other night but left it in the car. What a plonker. Could have used the phone, I suppose, but it’s pretty rubbish, and I wouldn’t be happy with the results. 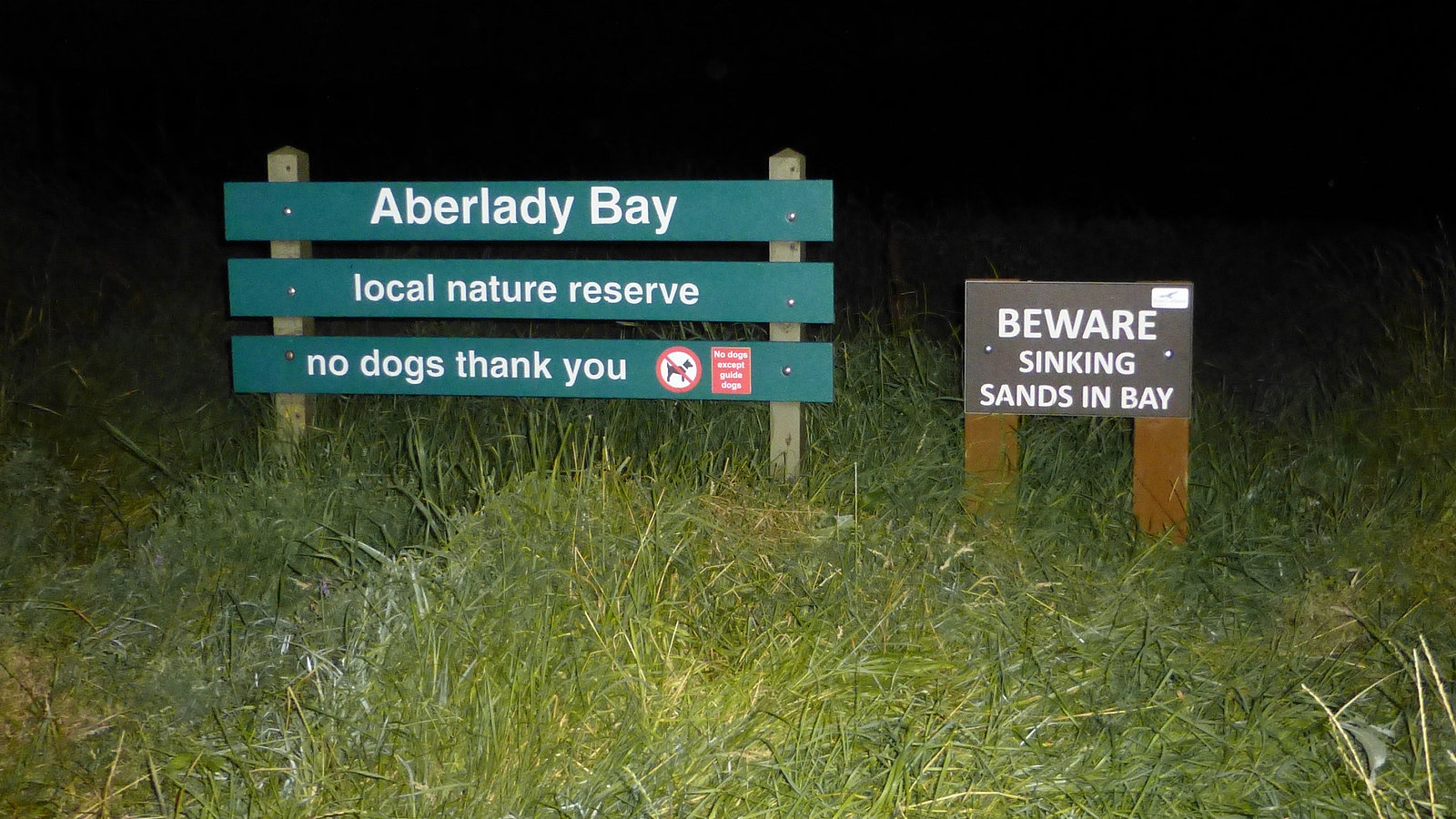 Walking was my chosen mode of transport this evening. Mostly for a change, and it’s also probably the best option for this location, at least until I get the fat bike on the road again. Parked at the entrance to the reserve this time and set off across the wooden footbridge over the Peffer Burn. The footbridge wasn’t always this good. I recall coming here with my father many years ago, driving up from Selkirk. The bridge was ricketier back then and only had a single handrail over the open water, which made passing people from the opposite direction quite nerve-wracking. I’m sure it was also narrower as well, and had a few missing boards. Quite an experience when crossing during a high Spring tide during a storm. The bridge is also a zone, AberladyBay.

Walking is much slower than kick scooting or cycling, but I’ve drafted a page about walking as a means of transport for turfing and was actually having some trouble finding enough to write about, so hoped my turf-walk today would help provide some useful hints and tips. The first thing that comes to mind is how noisy it is walking on gravel paths. It certainly masks any approaching footsteps, so much quieter walking on the grass verges along the path edge. The footpath passes close to the sewage works, well concealed from sight in the blackthorn, but not so well concealed from your nose. No prizes for working out where it is from smell alone! 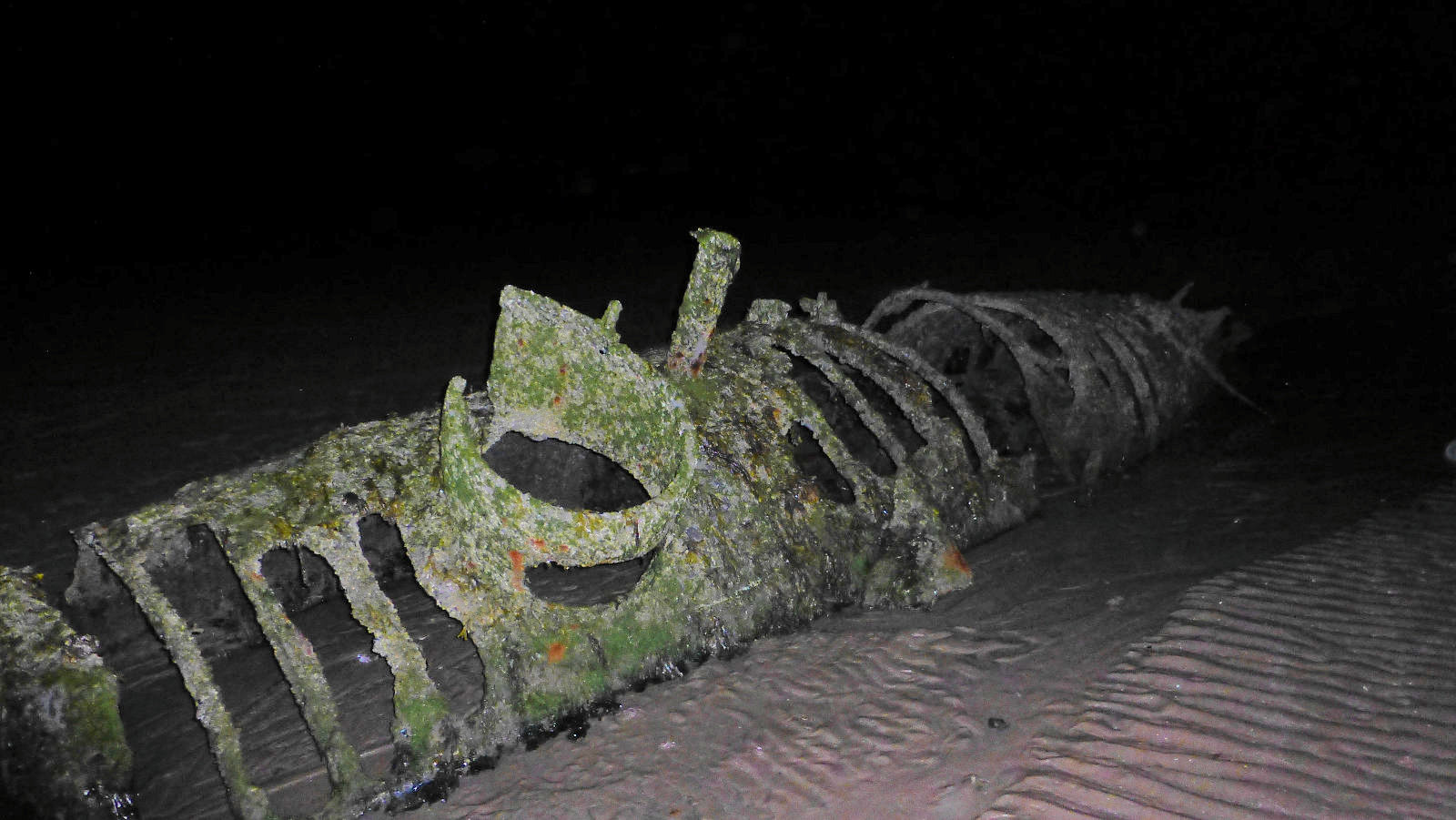 I followed the track directly out to Gullane Point, no worries crossing the golf course at this time of night. The track actually dates back to WW2 and served the many defenses in the area, such as searchlight batteries and coastal gun emplacements, most of the remains have been lost to the ravages of time and the encroaching dune system. Much of the dune system you see today was not there during the last war. My second zone take of the evening was the new zone, TheOldMan, still fresh with that additional 50 bonus points. I tried to get a few photographs but the rocks that The Old Man are too massive and my in-built camera flash too weak.

Dropping down to the sand at Jophies Neuk, I removed my sandals and stuffed them into the rucksack. You may recall I like walking barefoot, (which is perfectly normal, I’ll have you know) and where better than a nice sandy beach, a normal activity for such a location. However, I was not alone this fine dry evening as the local fauna were out in considerable abundance, partying wildly along the strand line, in their many millions. All hopping and bopping about like heavy metal teenagers at an outdoor rock concert. I’m talking about sand hoppers and walking on them barefoot didn’t seem to bother them a jot. Tough little buggers that they are. 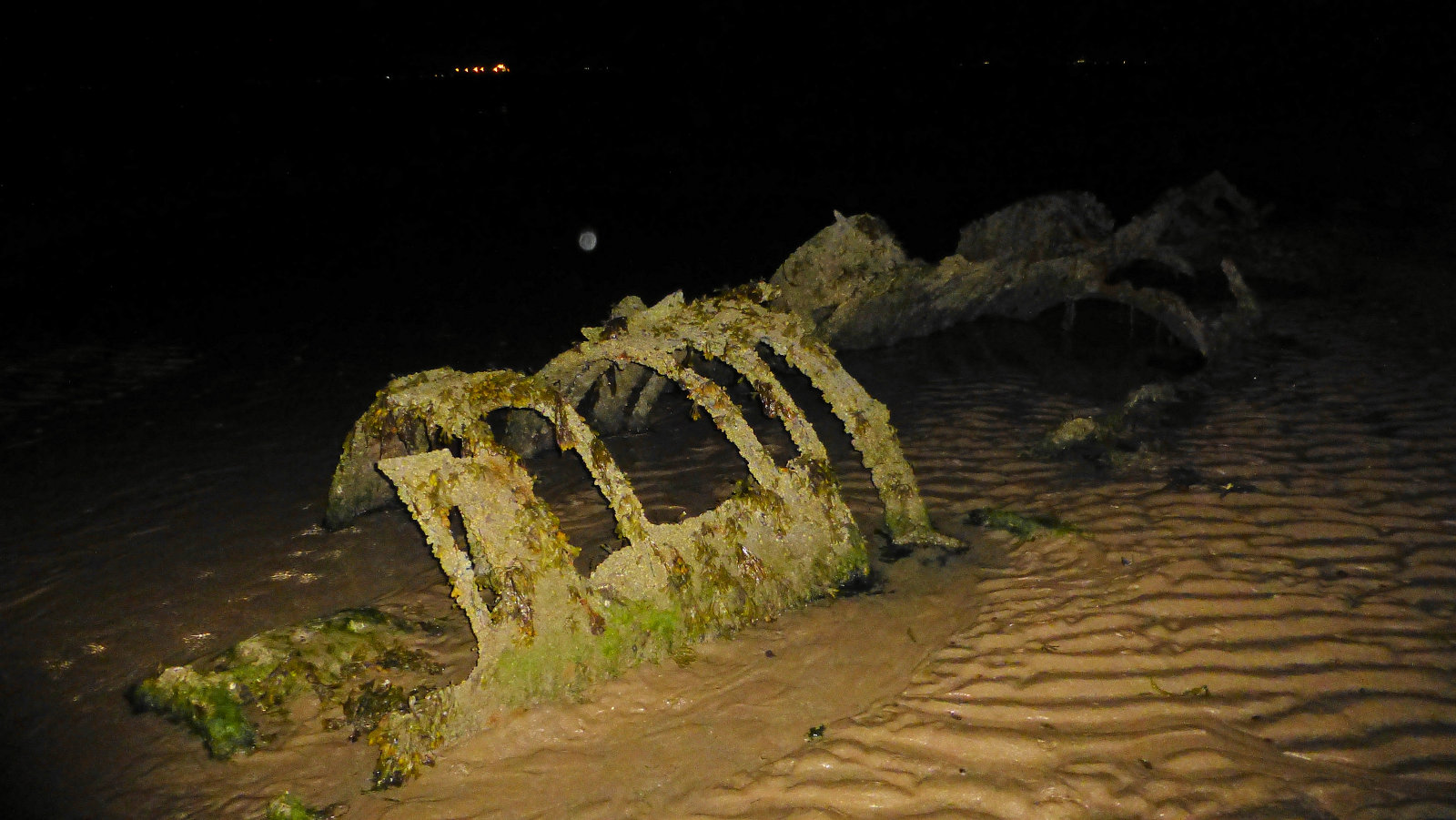 Heading out to the shore, it was very peaceful paddling barefoot along in the gentle, though slightly cool, surf. Lots of tern calling out in the Firth of Forth, with the occasional invisible wader issuing frantic alarm calls when my passage disturbed them from their slumber, or perhaps just their efforts at finding a late lug-worm on toast supper. Interestingly, the only other sound was the surf. Earlier, I could hear the deep throaty throb of the marine diesel engines on the oil rig parked out in the bay, but not here.

I used the Turf app to keep track of where I was in relation to the two zones I was now heading for, SubWreckOne and SubWreckTwo. As I neared them, I used the floodlight at the golf course as a marker point, following an imaginary line from myself, through the zones, towards the floodlight. Worked a treat and I reached the zones bang-on first time. A good trick to keep in mind when navigating at night. After some poor attempts at photography, I set off towards the next zone, SandySocks, locating it easier this time.

Zone SandySocks is located near a sand spit, one that has grown considerably over the past 10 years or so, since I started coming here on the fat bike. As I approached the sand spit, I was engulfed by black flies, hundreds of them landing on my bare legs, , face and arms. Brushing them off made little difference, they simply returned, along with dozens more of their friends. The incident had me recalling an episode of the X-Files called Darkness Falls, where Mulder and Scully investigate some missing loggers. Millions of little flies had carried them away and wrapped them in cocoons. Creepy. Luckily, I knew to keep a light on and managed to escape. Thankfully, they were the none-biting, none-carrying-away variety. 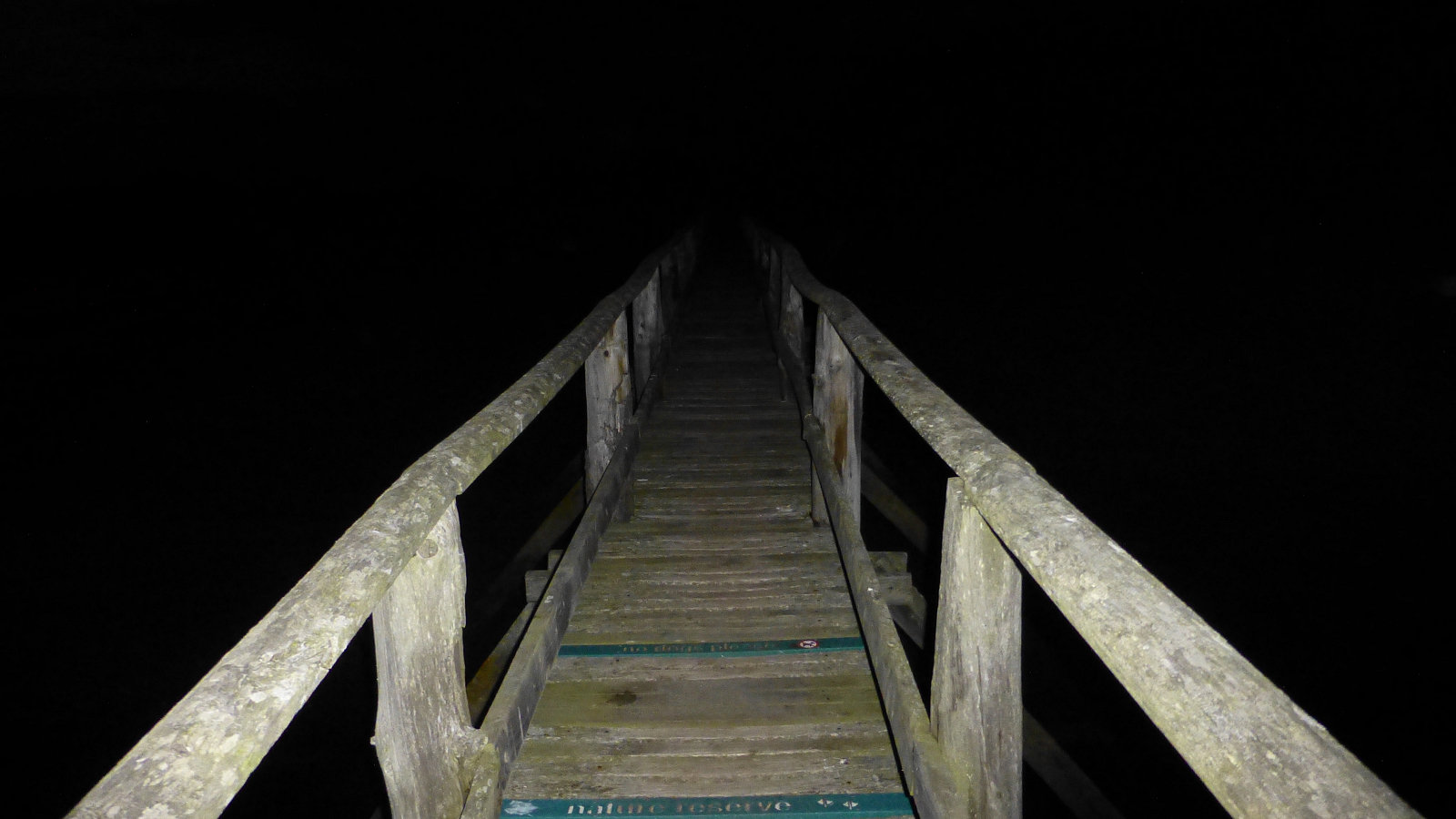 As with my last visit, I was again spotted, this time by Féarglas. Her message about either swimming or walking on water was much appreciated. I skipped visiting the other zone in the area, PillBoxWW2, as there was little worth photographing at night, and not much during the daytime either. So, it was back along the path to the car. My next encounter with the local inhabitants was less worrying, a single toad sitting in the middle of the path. It didn’t say very much when questioned, but then again, I don’t speak toad very well.

On my previous blog, I mentioned that Aberlady Bay has an un-official naturist area, and during my walk this evening an amazing idea popped into my head. That idea was to give clothes-free turfing a try, (at night, of course, when there’s no-one else about to see), and purely in the interests of scientific discovery and the advancement of turfing lore, to see if turfing while clothes-free, was actually possible, and also write up a blog on the exercise. If anyone would like to assist with the investigation, please get in touch. Free choice of either large four-fingered Kit-Kat, or peanut butter chunky Kit-Kat, to all volunteers! 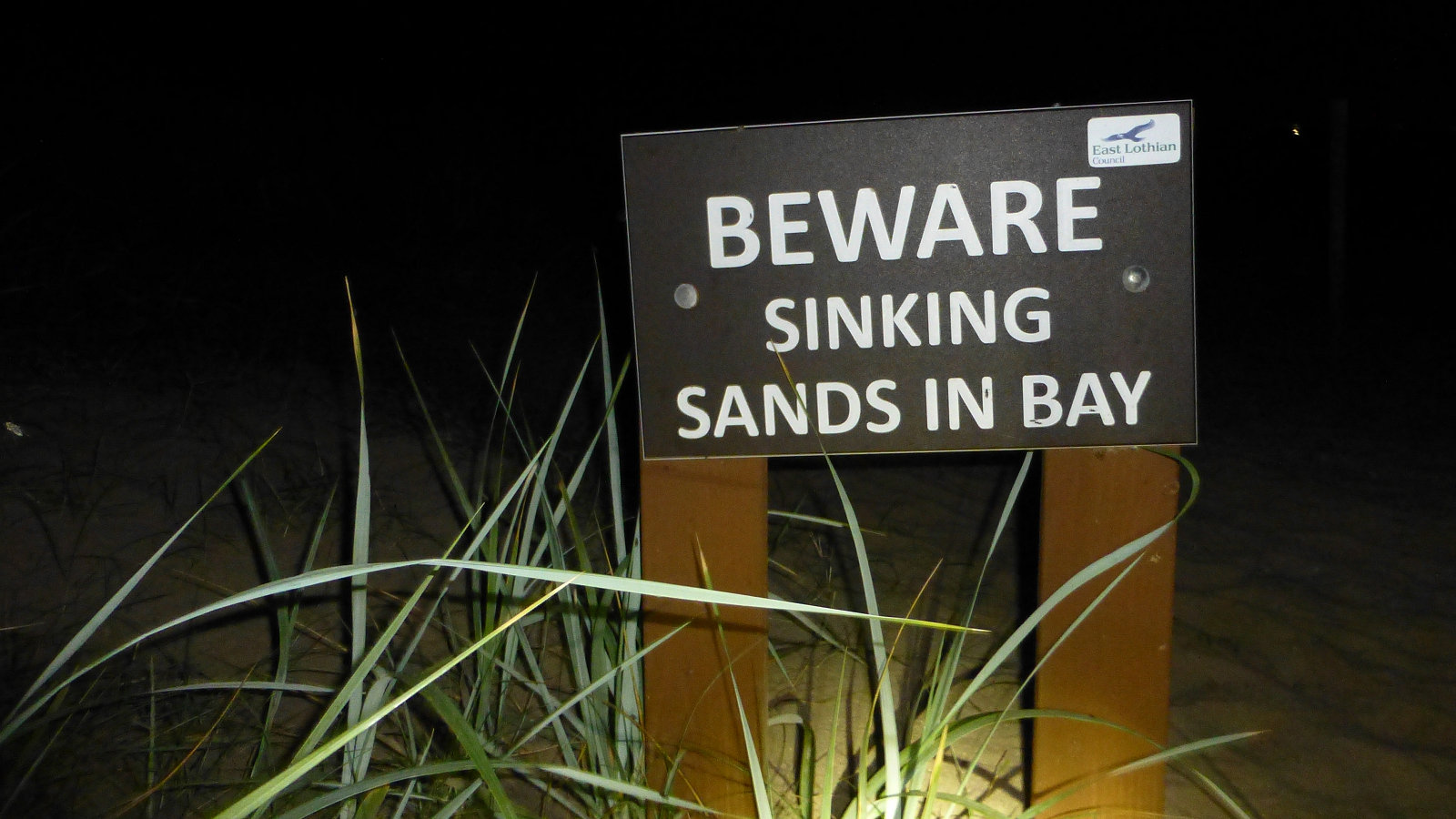 Finally, if you are planning a visit, you may come across a sign stating, “BEWARE SINKING SANDS IN BAY”. Great, I didn’t see that one until after two extensive barefoot walks out in the bay, and then only on the way back, which seems rather pointless. You need to see the sign before you get trapped in quicksand, never to be seen again. I missed the one at the footbridge, even though I stopped to photograph the signs. Actually, I’ve encountered quicksand here before, though nothing to worry about. It seems to occur where freshwater running from the land saturates the sand at an obstacle. In the two instances I know personally, one such obstacle was the wooden remains of a ship wreck, the other the rocks at Jophies Neuk. So, be careful out there. Until next time.