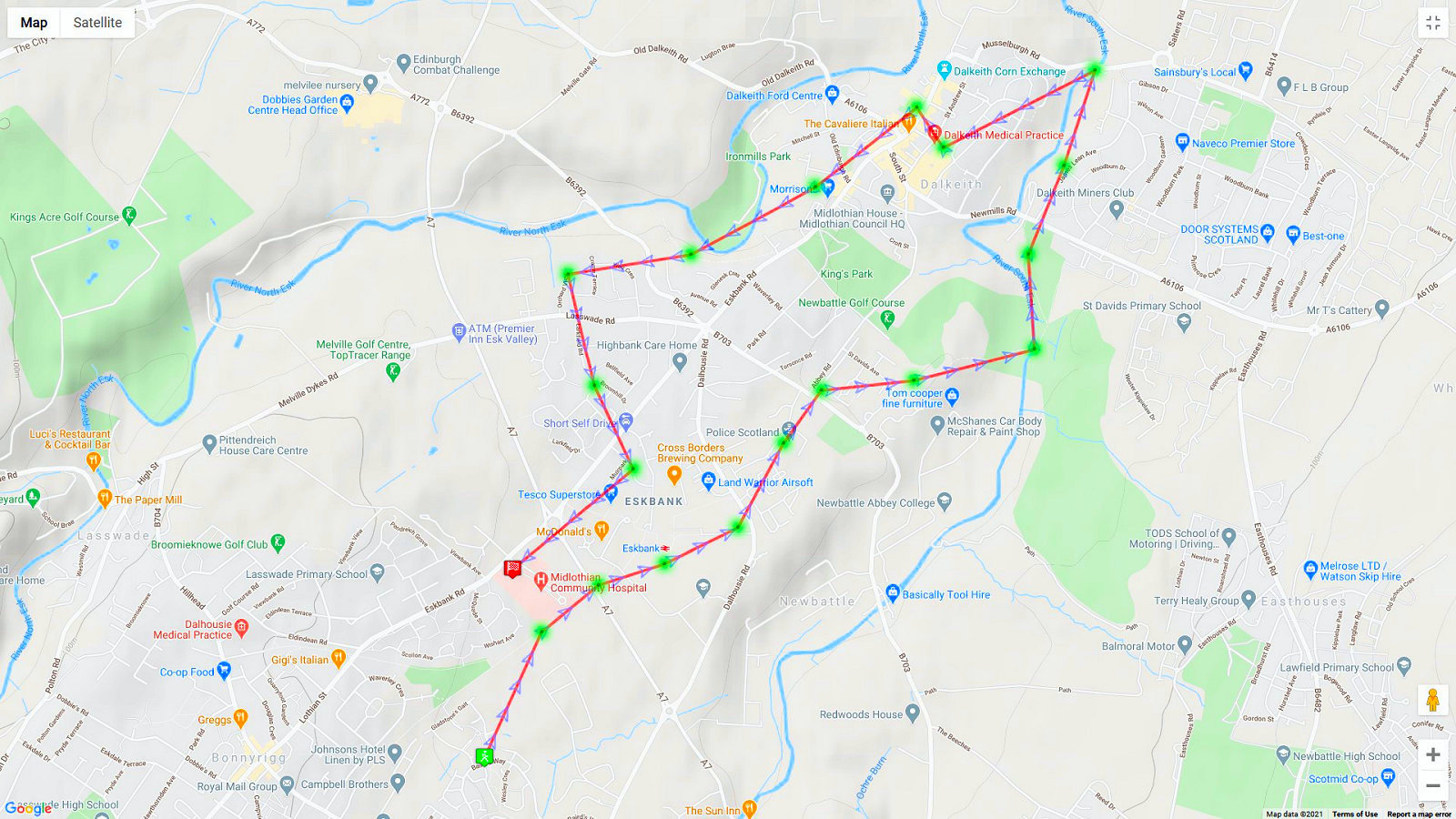 Just a quick easy blast around Eskbank and Dalkeith during lunchtime today, picking off a few zones lost over the past week. Weather was wild today, very windy and cool temperatures set to fall even lower with possible sleet forecast and some snow on high ground. I even dressed for heavy rain showers but was lucky and stayed dry the entire session. On the plus side, Ogre was behaving himself much better, with no gear slippage when changing up, down or pedalling off at all today, so I think all my maintenance efforts have paid off. I just need to make sure I don’t make any wishy-washy gear changes.

I tried out a new mobile phone cover today, a cheap plastic effort that should protect the screen from rain. Unfortunately, it also protected the screen from anyone actually viewed the contents on display, so about as useful as a chocolate fire guard during a fire and rescue training session. Was only a few pounds, so I guess you get what you pay for. In future, I think I’ll just keep the phone in the handlebar bag during wet weather. The cover is easy to actually install on the phone but a really pain-in-the-butt to remove again. Read broken finger nails time.

Out again later in the evening for an after dinner stroll with Cathryn, only took in a few zones on the Lasswade side of Bonnyrigg but interesting to watch turfers TSElsieSpanner and TSPedro_delb stealing all my hard won local zones – sorry that’s incorrect – thoughtfully clearing all my local zones for me to re-take again later this weekend. Another turfer, TS-féarglas, was sweeping in from the North, clearing all zones before her and will no doubt will have taken each and every zone for miles around by tomorrow morning.

We met turfer TSElsieSpanner at zone WayOfBaird and talked for s short while, before she headed off in search of more zones. I think I’m finally getting used to being asked if I’m Planet Gary. Afterwards, the thought occurred to me that we turfers are strange beings, silently cycling across town and country, stopping here and there to check directions, pausing at zones for a few seconds before cycling off again for another zone.

To an outsider this might be considered a lonely activity but, at least personally, I find it very calm and soothing. It’s just you and your bicycle, following the dictates of your turf app, taking you from here to there, from there to somewhere else, and a myriad of places in between. And when it’s quiet, after the “normal” folk have gone to bed, we get the place to ourselves. Then we get the calm, the peace and the quiet, with only the occasional scrounging urban fox, passing vampire bat or other secret denizens of the night for company. I think the best turfing times are late in the evening, during the night and the hours around dawn, the magical times.

Anyway, enough wittering on for today. I plan to be out and about early tomorrow collecting points, zones and uniques, but as to where, I’ve let the weather Gods decide. It’s going to be cold overnight and another day of unsettled weather is forecast but that okay by me as it’s great for photography. See you all again later.