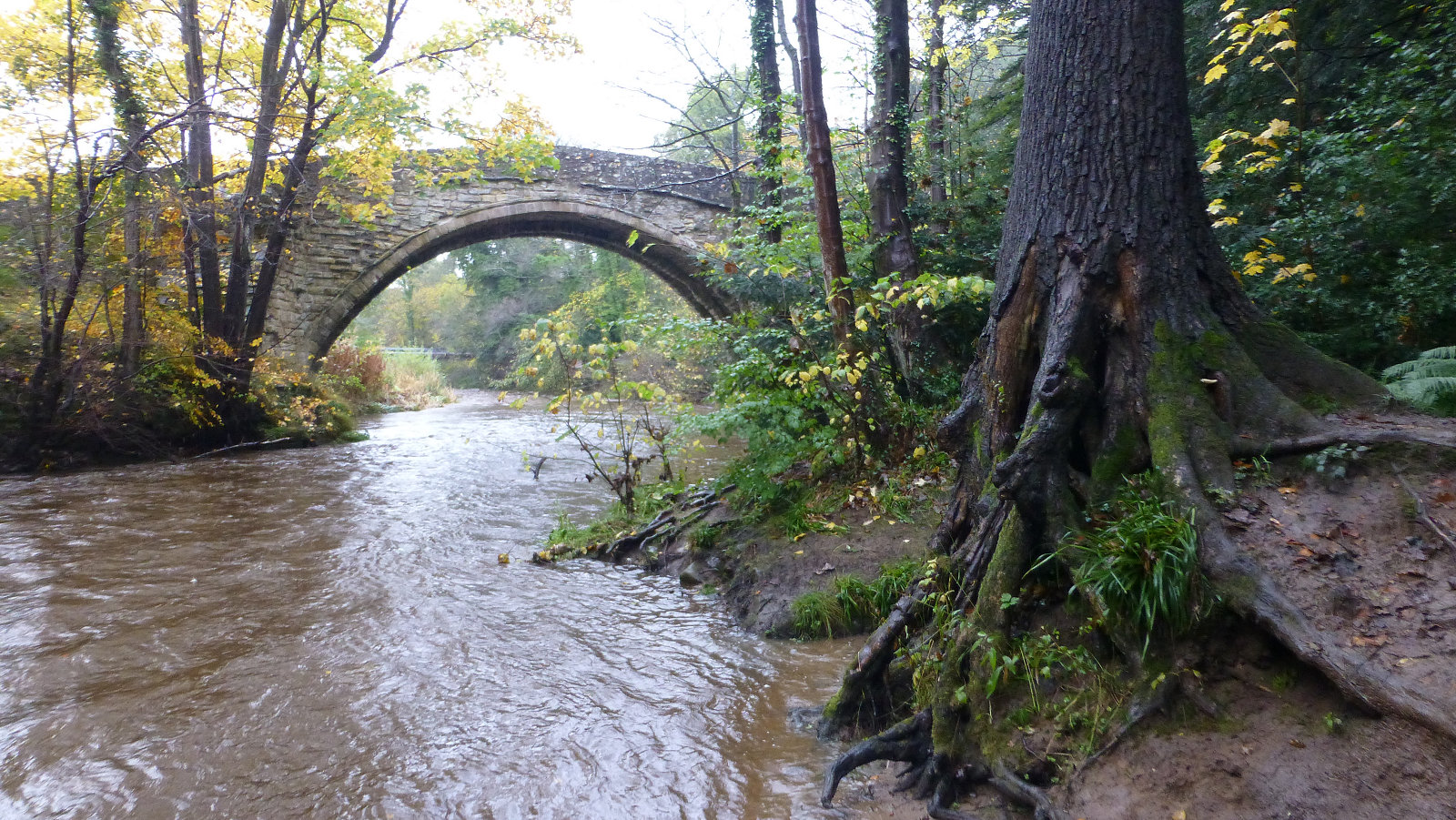 I watched an amazing video the other day. It was titled Safety to Nome (trailer), a feature-length film that documents the 2017 Iditarod Trail Invitational (ITI), a 1,000-mile fat bike, cross-country ski or foot race across Alaska, from Anchorage to Nome. And if that title does not reveal the epic scale of this race, the race takes place in March, the air temperature can be as low as minus 30 Degrees C., together with fierce Arctic winds gusting to 30 mph and above. Well, worth watching.

So today, feeling inspired by the intrepid adventurers riding their fat bikes on Safety to Nome, I would have felt a bit of a wimp not venturing out on the bike today to grab a few zones. To say the weather was inclement was an understatement. It was wet, wet, wet, very wet, and the rain had been bucketing down for two days now. Okay, was are not talking Iditarod Trail winter Alaska weather here but this was Scottish wet. Using words such as sodden, muddy, wet and miserable would not do justice. If I were to use some proper Scot’s words such as dreich, drookit, pish-oot and mochie, you might get the idea.

It was only fitting that I took my Surly Pugsley for a spin this morning. We had watched Safety to Nome together and he was fair champing at the bit to get outdoors. Okay, no snow today – Pugsley will just have to wait – so we’ll have to make do with sodden muddy trails and cats and dogs rain. My thoughts were to cycle round the woods at Newbattle, with a dozen or so zones on offer, more than enough to keep my Five-A-Day going.

My starting point was zone StoneGate, down by the A7, for a revisit, then up through Kirk Bank Wood for zones OldBattle, RecentBattle and Newbattle. It would be fair to say the trail was waterlogged, the tree roots were as slippery as slippery can be and fallen leaves were concealing all the usual tree stumps, buried half-bricks and pot holes you normally spend your time avoiding. Thankfully, Pugsley is shod with 100 mm wide Surly Nate tyres running at 15 psi. This means you just about float over everything, boulders, fallen trees, small dogs, lost children and so on. Makes cycling so much easier than picking your way around trail hazards.

Leaving Kirk Bank Wood, smooth tarmac along Newbattle Gardens brought me back into the wood, picking of another revisit with zone BattleForest, before a fast but cautious freewheel down to zone SouthEsk. The tarmac path here can be treacherous when wet, particularly at this time of year when heavy foot traffic turns fallen leaves into a slippery mushy slimy soup. Patches of silt also accumulates on the lower stretches which can catch the unwary, reckless or plain stupid.

The South Esk was running very high and fast today, turned a dirty brown colour after the previous days of heavy rain. I now rode upstream, careful not to slip on the brick rubble and tree roots as the path is immediately next to the swollen rover. It would not be a good day to go for a swim. I suspect it would be Musselburgh before I’d be able to get out again. I was now heading for Newbattle Abbey and zone BattleAbbey, located in the ornamental gardens at the rear. By the way, a Surly Pugsley actually floats in water.

Next, I crossed the river (on a footbridge) and started the long slow climb up to zone TheNorthPath. Actually, finding the climb easier than my previous visit. No doubt due to my back having returned to its normal uncomplaining self. Approaching Easthouses, the path turns right and after a few muddy puddles zone Mary is added to the day’s tally. My next zone, TheSouthPath, is an easy downhill from here. However, just for today I’m renaming the zone to TheSouthStream, in honour of the small stream running down the centre of the path and doing its best to create the next Grand Canyon. Noticed a few lost salmon looking for their spawning grounds.

Crossing Newbattle Road, it was back into the woods again. The rain was heavier now and I was beginning to feel rather damp. I’m just thankful I heading for home and not cycling the Southern Upland Way and a wet overnight camp to not look forward to. Again, lots of big puddles, patches of melted chocolate mud and fallen leaves hiding the usual hazards. After zone TheRedWoods, a few minutes freewheel had me waiting to cross the very busy A7. Must have waited about 10 minutes before a long enough gap presented itself. It’s so nice to feel the rain dripping down the back of your neck. Not.

Two final zones to get, ByEskWeir and GroveFarm. Again, the path was a running stream and the water at Esk Weir was quite spectacular, the sound of the water was almost deafening. I wonder what it’s like living in the houses nearby. The rain on the final stretch home could only be described as stair rods, fair pelting down, mostly on me. The passing traffic on the hill past Cockpen Kirk didn’t help matters either. I was actually cycling up a small stream running down the side of the road. Finally, back home, dripping clothes hung up to dry, and some lunch.

Bill Merchant, ITI co-founder, mentions in Safety to Nome, that participants who get frostbite have either not prepared their equipment properly or have done so but don’t know who to use their equipment properly. This was true of myself and my clothing this morning. My so-called waterproof gloves just aren’t. Neither was my Alpkit waterproof jacket. I’d also forgot to wear my Sealskinz waterproof socks. Suffice to say I was drenched through. Time to fork out a few credits on better waterproofs, I think. 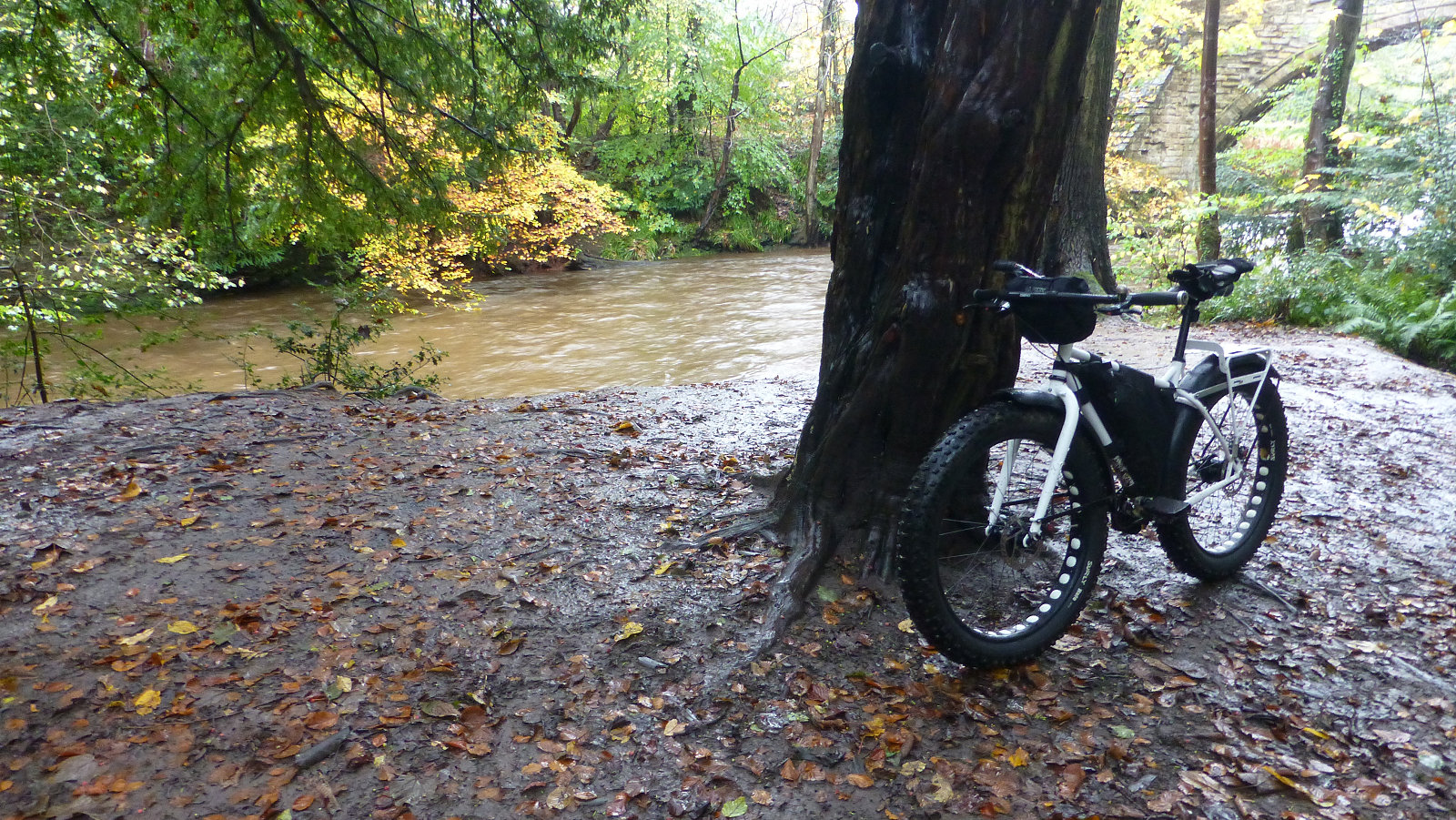