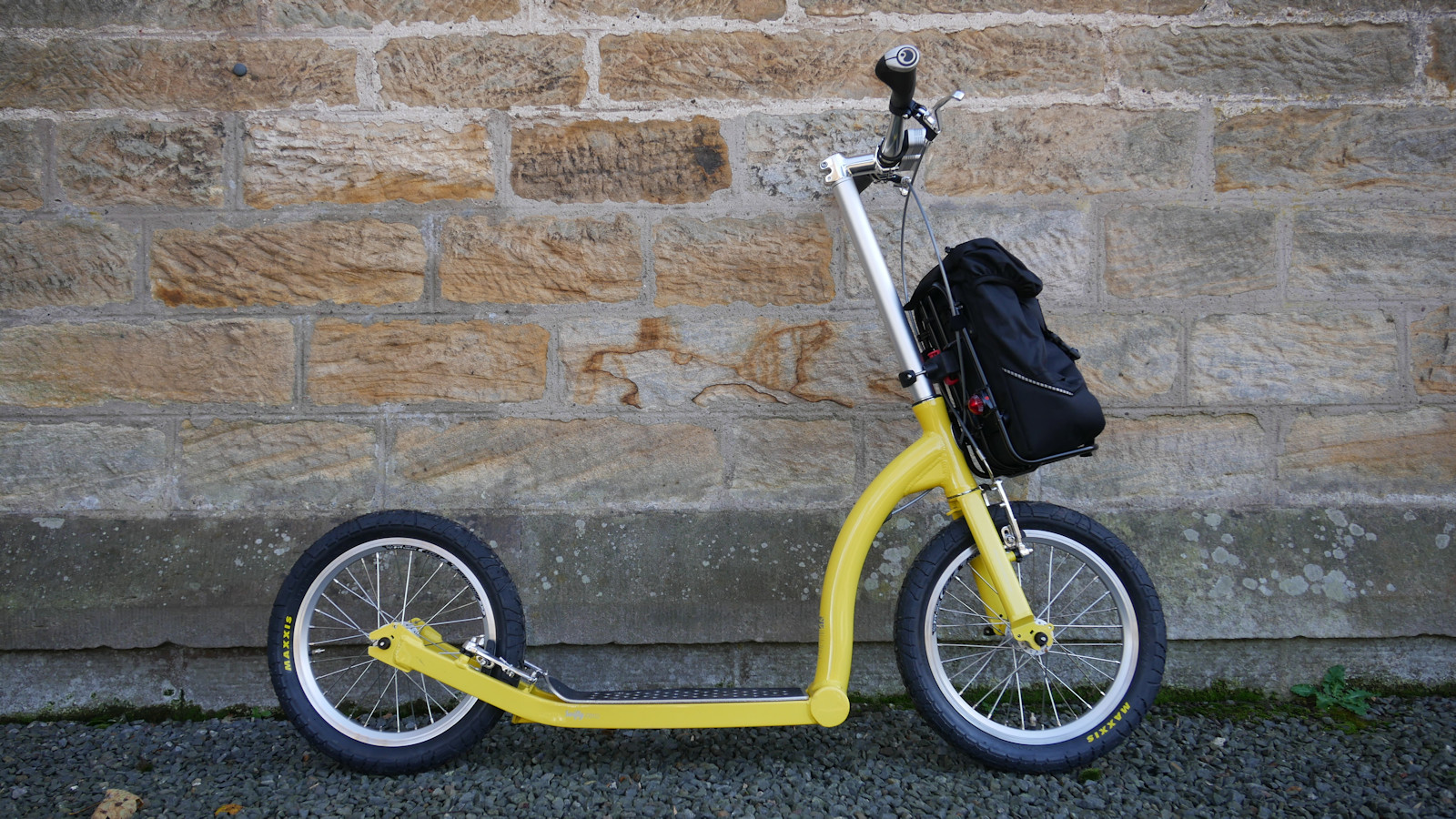 Turfing and visiting relatives sometimes just do not go together well, at least not for myself today on a visit down to Kelso in the Scottish Borders. It’s frustrating in the extreme, to put it mildly, particularly when you know there’s 52 unique zones all around you, and you are unable to get them all, only a few of them in the passing. I’d loaned my Swifty Zero kick scooter to Trish, the partner of Colin, my wife’s brother. She wanted to give it a good try and perhaps buy one herself. Our visit today was mainly to collect the scooter, go for a walk and generally catch up. Soup and sandwiches was on the table for later.

Our initial plan was to meet at the car park beside the garden centre in Kelso, then walk along the old railway line to Roxburgh, returning back downstream on the footpath along the River Tweed. An excellent idea I thought, as I’d be able to pick off about 20 zones in the passing. However, torrential rain over the past few days saw the Tweed running high with flood water and there was some doubt about whether the path beside the river was safe. It would certainly be muddy. And the fact that is was pissing down with rain did not entice us to even try the walk. Although my wife Cathryn was all for it.

With the weather forecast set to brighten in the afternoon, we swapped our plan about, caught up with gossip in the morning, had lunch, then headed out for a walk around Kelso in the afternoon. I had the perfect zone-rich walk around Kelso in my mind but the other three people I was with were all non-turfers and I had little say in the matter. When we set off I hoped we would at least pass a few zones I could take without causing too much fuss. I did try to explain the delights, joy and thrills of turfing but nobody seemed to understand what the point of it was, so I decided to shut up, donned a fake pleasant smile and tried to be a nice social chap. The latter with some difficulty as I’m not a social person at the best of times.

However, Lady Luck was with me as we walked around Kelso, and soon we were walking through Kelso Rosebank Cemetery. And lo-and-behold what did I see lurking a few meters from the path? Yes, zone KelsoCemetery. Just going to look at a gravestone I said and slipped away to take the zone. But did they wait for me? Did they heck and I had to run to catch up. Not so easy when wearing walking boots, I can tell you.

At this point I noticed some turfer activity on the turf app. A few zones were showing blocked status across by the river. Closer inspection revealed that greasedweasel was in the area. However, she was ghosting, switching the GPS off on her phone and her turf icon was not showing on the app, so I was unaware where she actually was or her direction of travel. Soon after, I noticed a couple of people lurking suspiciously at the roundabout ahead, phone in hand. Nothing showing on my turf app though. As they kept giving me the eye, I suspected they were turfers. It was greasedweasel and we were able to chat for a few minutes. Unfortunately, I was unable to linger as my relatives were waiting impatiently. Perhaps next time I’ll be able to chat for longer.

We next dropped down to the riverside path and I was able to take zones MayfieldWalk and TweedRest as they were directly on the footpath. Next our party headed for the town centre, passing tantalisingly close to Kelso Abbey and the zone located there of the same name. So near yet so far. But soon after, Lady Luck granted me good fortune and Colin stopped to draw cash from the bank. I was able to nip across into the square for zone Horsemarket.

We then walked up towards the entrance gate to Floors Castle, again annoyingly close to zones, two by the river and one at the rugby pitch. It was sheer torture not being able to take them. Non-turfers just don’t understand what it’s like passing within a stone’s throw of a zone and not taking it. Our walk took us past Kelso High School and directly through zones TurfCourse, LandOfBrooms and Eschiehaugh. By now Colin didn’t seem to mind us reverting to a slightly slower walk to allow time for the zones to be taken. Good chap that he is.

The one good point to come out of today’s mini turfing session was that I’d got a good idea of the lay of the land in Kelso. I now knew that a return visit with either bicycle or kick scooter would be fine for the job, through dry conditions would be preferred if using the kick scooter along the path to Roxburgh. And I’d also managed to get my Five-A-Day as well. Bye for now. Oh, and Trish didn’t decide to purchase a Swifty scooter of her own. I think she was too self-conscious about being seen.