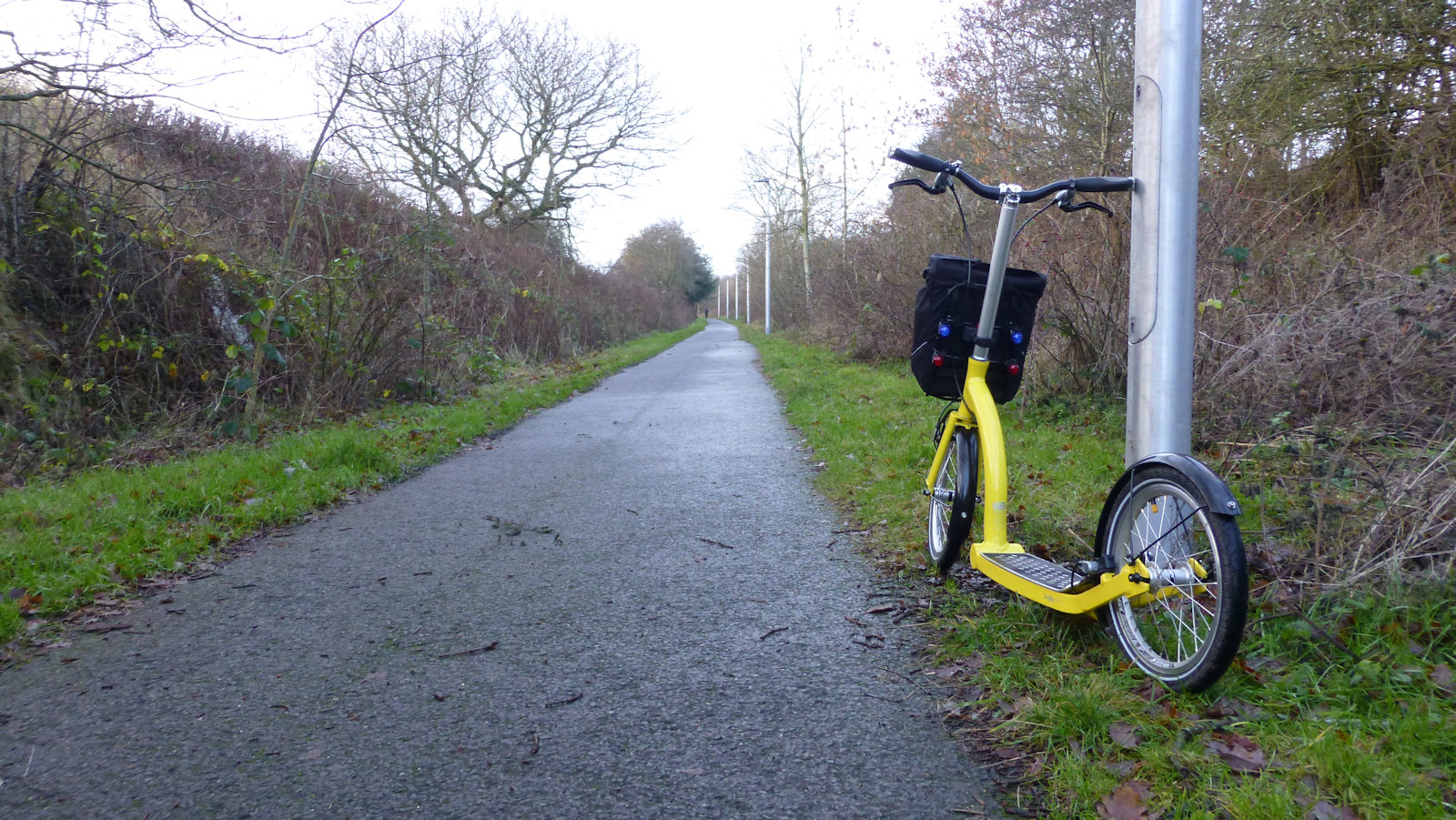 The Tweed Valley Railway Path runs for 5 miles between Innerleithen and Peebles in the valley of the River Tweed in the Scottish Borders, about 30 minutes’ drive from my home in Bonnyrigg, Midlothian. Normally, I would have ridden this route in the daylight before undertaking a night-time scoot but the route looked easy enough to follow and I knew the area fairly well having lived in Peebles for some years. The route has recently been extended a further 2 miles downstream to Walkerburn, but I decided that a 1o mile round trip would be enough for this after dark adventure scoot. And I could always keep that for another day.

Finding the start of the path in Innerleithen was easy enough as it is well sign-posted on the B709 road to Traquair. Parking was readily available on this quiet, well-lit street. Unsure if all the path was tarmac I opted to take the more off-road orientated Swifty Air, rather than the more road-suitable Swifty Zero, although I would later see that the Swifty Zero would have managed the route quite comfortably and I’ll bring that on my next, probably, day-time visit.

Unlike most of the old railway based cycle routes in Midlothian, the Tweed Valley Railway Path is largely unlit, other than the short stretch through the village streets of Cardrona, so scooter lights were the order of the day, or rather night. Mind you, a clear sky under a full moon would be a magical time to visit again. I’ll need to keep an eye on the moon calendar and weather.

The great thing about routes based on disused railway lines are the gradients, or rather lack of them. Trains cannot run on overly steep gradients so scooting is usually easy although I know from previous experience that the prevailing Westerlies can make travelling up the Tweed Valley a considerable challenge with strong headwinds. However, winds were light this morning with only a slight breeze to help cool my exertions.

I did not expect to encounter much in the way of traffic in the way of dog walkers, cyclist, runners or even horse riders, on this route, at this time of the morning, but after about a mile I came across four young lads, clearly having imbibed a pint of two of the bevvy, making their way upstream, probably to either Cardrona or Peebles. A quick jingle on the bell and they parted to let me through. I wondered if ‘d meet them again on the return journey but this was not to be.

The tarmac surface made for easy going and the Swifty Air fairly scooted along with minimal effort. Regular posts are located in the middle of the route to deter unwanted traffic such as motorcycles. Junctions along the route are well sign-posted and straying from the route would only happen with a lack of paying attention. Other than a few patches where tree roots are raising the tarmac surface the ride quality was excellent.

Now, having just said something about lack of attention, I managed to miss a sigh-post in Cardrona and spent a few minutes looking for the route, on a couple of occasions finding myself on the golf course. A Police patrol car also slowed down to check me out, probably looking to see if I was riding an electric scooter, or perhaps it may be something to do with that I was bare-chested and only wearing shorts at the time. The officer did give me a cheery wave so was probably laughing at me as well. I suspect I would do the same if I encountered someone like myself. However, eventually I picked up the route, crossing a footbridge over the River Tweed and I was on my way again.

The path was now crossing a golf course and a large hotel was evident to the right, however, I had the place to myself, other than a few rabbits scurrying from my path. Soon, after dipping through a short tunnel under the A72, I dropped down into Peebles, and made my way through the sports ground to find a seat for a wee rest stop, downing some water to assuage my thirst.

The return journey was very easy, with the path following the River Tweed as it flows downstream, single kicks giving long runs before another kick was required. No problem with losing the route in Cardrona this time and before long I was back at the car in Innerleithen, delighted having completed a most enjoyable 10-mile scoot on a Swifty Air. As the Terminator said, “I’ll be back”