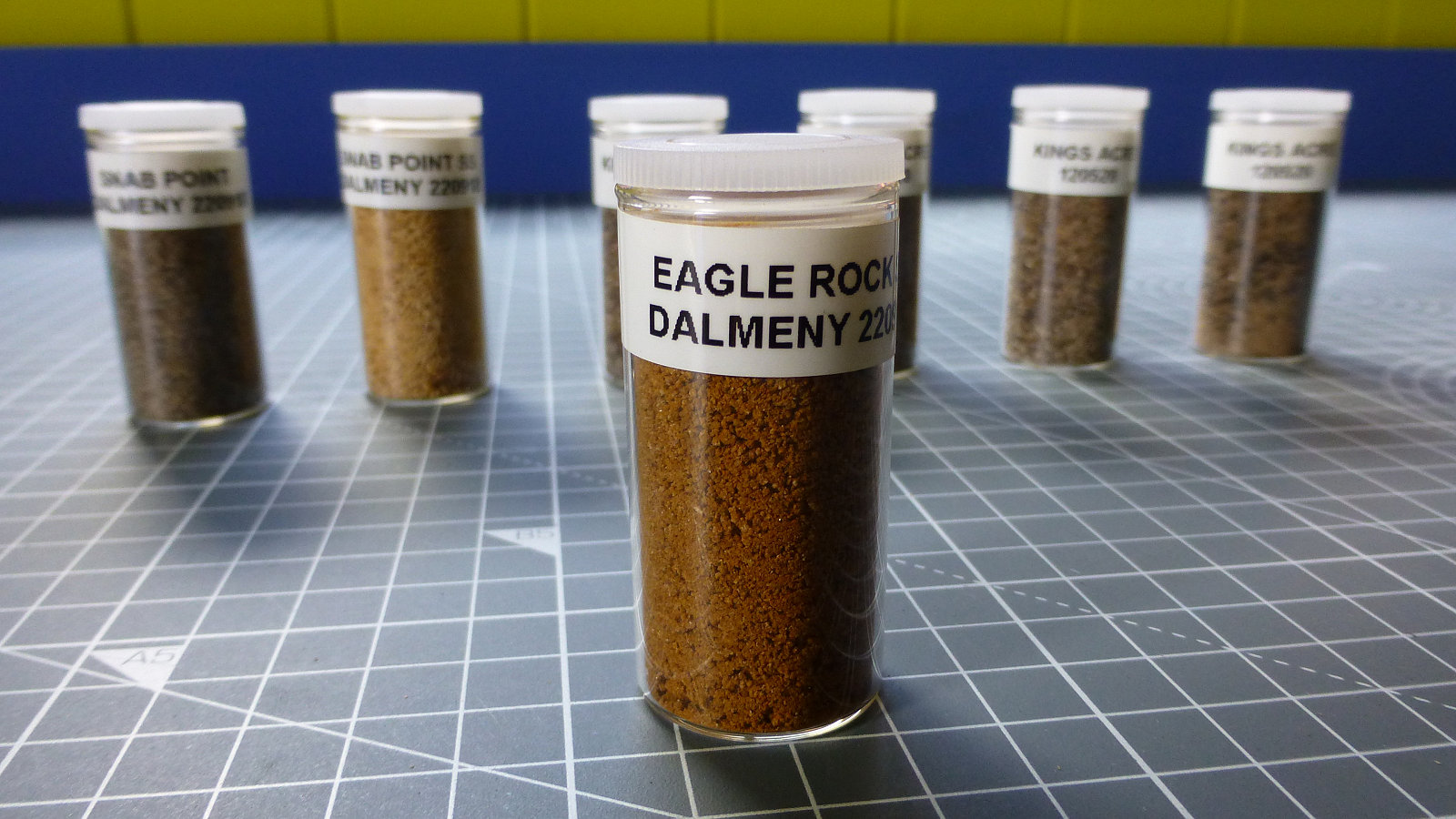 As well as the usual locations for sand collecting, such as beaches and dunes, there are number of less obvious places where sand may be collected.

Old Stone Walls
Keep an eye out for old stone walls made from sandstone, particularly those that have been there for many years as erosion will have had more time to break down some of the sandstone into sand. You can often find small pockets of sand in this type of wall, as well as fragments of stone that are easily crumbled in the hand down to fine sand. Sand can often be found along the foot of the wall but tends to also contain other matter blown in from elsewhere. As well as free-standing walls buildings such as ruined castles, old churches, in fact any old building constructed from sandstone.

Landslides
Fresh, or even 30 year old landslides, can often be very productive for the sand collector. Depending on the local geology, you can often find bands of sand, clay, and loose sandstone readily available for collecting. I’ve found a number of landslides, both at the coast and inland, where good collecting was had.

Raised Beaches
These are essentially normal beaches that have been left high and dry by the lowering of sea levels. They are found inland from the coast and can vary in height from less than one metre high to over ten metres high. Recognising them is not always so straight forward as they are often lost in the landscape. However, if you do a little research, for example, getting hold of some local geology reports, can be of some assistance.

Animal Burrows
Many animals, such as rabbit, otter, mink, fox and badger, excavate burrows in which to raise their young. In many instances, the animals in question choose locations where the soil is easy to excavate, usually sand or sandy soil and the spoil heaps found outside these burrows are often worth investigating for sand samples. Animal burrows are a good way of collecting samples from raised beaches, which often lack exposed areas. Mole hills and even ant hills are further potential sources of samples and may be worth investigating.

Caves & Overhangs
Many caves and overhangs, both inland and at the coast, can offer opportunities for Sand Collecting. Caves and overhangs often have accumulations of sediment, which may include sand or sediment washed in by rain or running water. Some are also dry and good clean samples may be collected. Natural erosion can also produce good samples.

Spoil Heaps
Most mining activities, as well as all types of excavations, produce spoil of one form or another and while natural sand might not be present, the results of natural weathering on the spoil heaps can produce a form of sand, which can be collected. At open cast sites, the removal of the over-burden, the earth and rock that lies above the layer of material being quarried, may also contain sand and close inspection of such spoil heaps may reveal collectable samples.

Excavations
Any type of excavation into the ground may go through layers of sand, particularly in areas where glacial debris has been deposited. However, deep excavations can be dangerous and great caution should be taken at all times. Large, open cast excavations, such as the laying of new roads are less hazardous and also worth investigating. Excavations can be found just about everywhere, and often in the most unexpected places. I once found a large hole in some woodland, the hole having been created by youths for a BMX track and I as able to gather a good sample from the exposed side. A good tip is to always carry a few sampling bags as you never know when you might come across a suitable excavation. Just ask the workmen to collect a small sample for you.

Bird Colonies
Some birds, such as sand martins are summer visitors to the British Isles and are a good indicator that exposures of sand may be situated close by. If you spend some time watching the birds and following their comings and goings, you should be able to locate the nesting colony. However, please do not collect during the breeding season, note the location and return in the winter when the birds have finished breeding. Collect sparingly and avoid damaging the nesting site. Other birds that nest in sandy soil include puffins, bee eaters and the kingfisher.

Rotten Rock
Many locations such as coastal cliffs and old quarries may have areas where the natural rock is starting to decompose. Sometimes this soft rock, when crushed by hand or hammer, crumbles into sand. This sand can often contain minerals that would eventually dissolve or be broken down during weathering and are absent from sand samples collected from, for example, on the beach. One example I found at the coast contained numerous flakes of mica, a mineral absent from the beach sand of the same location.

Toppled Trees
When trees fall during winter gales or storms, the exposed roots of the unfortunate tree often leave large holes in the ground, sometimes more than 1.00 metre deep. If the tree was growing in a suitable habitat such as beside a river, at the coast or in an area where glaciation has taken place in the past, samples of sand might now be exposed and available for collection.