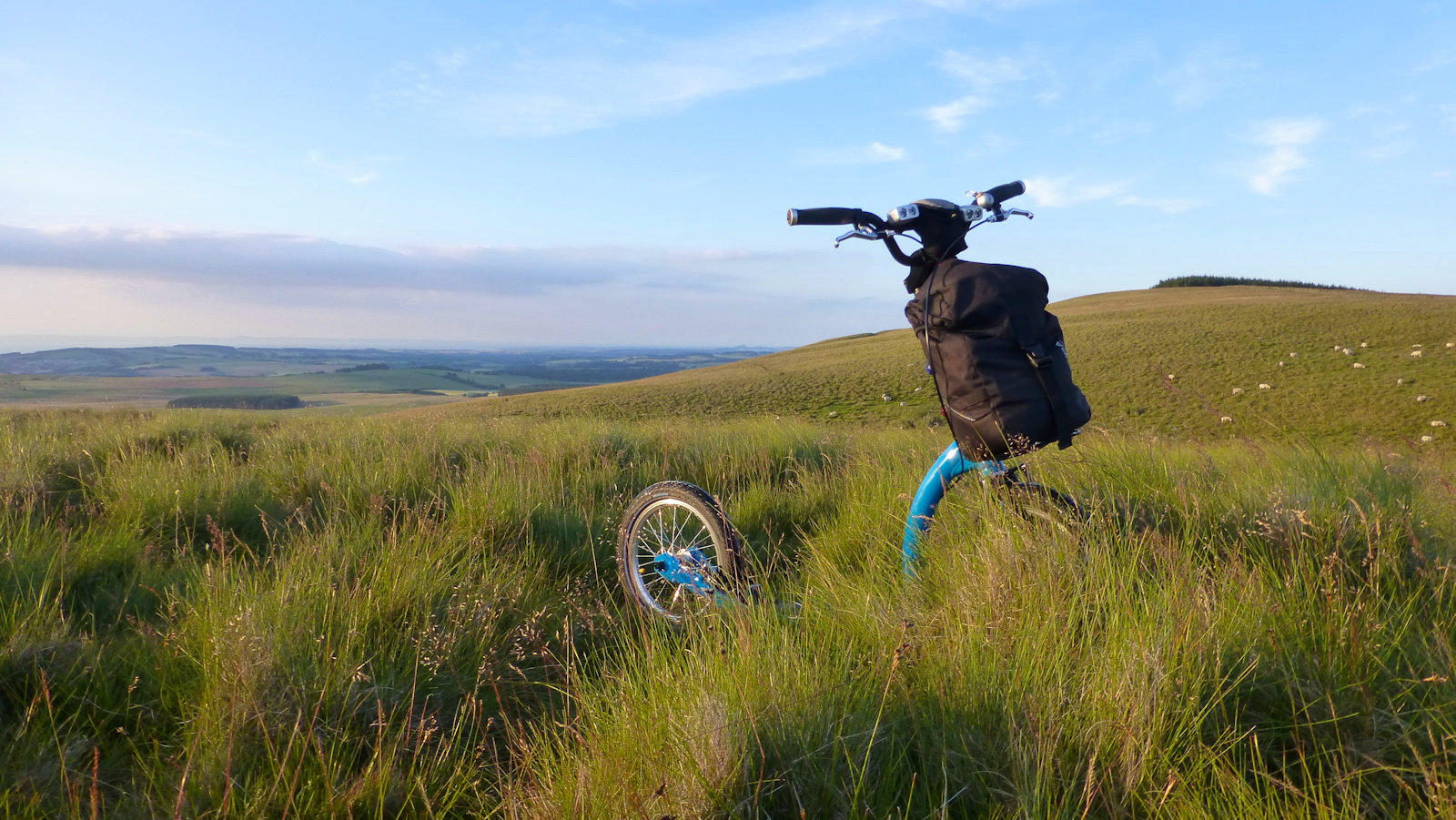 The Swifty Zero kick scooter is an amazing creature, great for scooting around the back streets, hidden lanes and places where you really shouldn’t be scooting that I won’t mention, but it lacks one thing, the ability to carry a load. Unlike bicycles where a vast range of off-the-shelf products are available, items for kick scooters are not so readily available. So, it was time to do some thinking.

My first thoughts were towards rucksacks and bum bags, both of which I already have and do the job just fine. However, I really wanted the scooter to carry the load, rather than myself, and also avoid getting that sweaty back feeling associated with physical exercise and their use. Next, I looked at handlebar bags.

Again, they would carry the load I wanted without issue but would also obstruct my handlebar mounted lights. And I did not like having loads too high on the scooter, preferring something lower down to keep the centre of gravity low. This led me onto custom racks and I do have a plan to manufacture something but not at the moment. That will have to wait until later.

After hours of research on the Internet, I finally came up with a system of sorts to carry the load. It comprises four different items, all working together. They include:

The Rixen and Kaul Vario Rack is mounted low down on the handlebar stem using the Klickfix Caddy Post Clamp (also from Rixen and Kaul), with the Altura Arran 16 litre pannier mounting on the rack by means of half a dozen or so highly technical devices called cable-ties. The 16 litre capacity of the pannier is ideal for my needs and carries the load reasonably low.

Mounting everything was fairly straight forward but I did make a few adjustments here and there. To attach the cable ties to the pannier, first loosen the screws holding the plastic clip mounts on the rear of the pannier. You may need to reach inside and down the back to hold the plastic screw covers while doing so.  Tighten them up when finished. The cable ties go behind the plastic mounts and round the Vario Rack frame. Trim off the loose ends.

With the Post Clamps, the diameter of the handlebar stem is on the outer maximum that the clamp will cope with and the supplied screws do not have a lot of bite onto the lock-nuts inside the clamp. I decided to replace them with slightly longer M5 x 45 mm Allen bolts. This also means that I don’t need to carry a cross-head screwdriver and can use the Allen key in the tool kit should they need adjusted. One final point is that the brake cables now make a knocking noise on the Vario frame, some short removable Velcro straps solved this minor issue.

The whole setup is very neat and pleasing with everything fitting together just right. The pannier lid also has a zipped pocket for smalls such as keys, mobile phone and the like.  The Vario Rack attaches to the Post Clamp with ease, though you do need to work out just what part of the rack clicks on where and at what angle, but once mastered it only takes seconds. It was a couple of weeks later that I was put my new luggage carrying system to the test.

As an early riser, being up and about at 3.30 am was nothing unusual for me, although you would not think that from some of the looks and comments I tend to get, but the wee small hours are great times for being out on the Swifty Zero. Where I live, on the outskirts of Edinburgh, its usually still and very quiet, only a few delivery vans or black cabs are out on the road and the streets are just about deserted.

Using the Altura Arran pannier mounted on the Rixen and Kaul Vario Rack is a breeze. It swallows everything I need to carry with ease and it’s so simple to just reach down over the handlebars and grab, or deposit, your items. Small items tend to get lost in the main compartment, so they are better housed in the zipped lid pocket. The single click buckle is also easy to use and the internal lid has a draw-cord closure though I didn’t use it on this occasion. You can also strap items onto the rear of the rack, using Velcro straps or short bungee cords.

If you have more than one Swifty scooter, and I’m also the proud owner of a Swifty Air as well, all you need to make use of the rack and pannier system above is a second Klickfix Caddy Post Clamp attached to the second Swifty. The rack & pannier can be easily moved between scooters.

After mounting the Klickfix Caddy Post Clamp on the new Swifty Air, I noticed that it keeps moving out of position, turning slighty to either side. I initially thought the post clamp was loose but closer inspection revealed that the long hollow spacer tube that runs between the headset and the handlebar stem was loose, rotating easily in the hand. Not a problem I have on the Swifty Zero, I might add. I tried tightening the handlebar stem bolt but it was really as tight as I would want it, any tighter would put excessive force on the headset bearings, causing them to bind.

I attempted to solve the issue by roughing up the surface of the fork tube with wet and dry paper, then applied a thin layer of silicone sealant, just a paint-thick layer, enough to help the metal surfaces bind rather than slide. Making sure that there were no large lumps to prevent the spacer tube from sliding on. After 24 hours to allow the sealant to dry, everything was re-assembled and seemed to be working okay. I suspect some further work may be required but I’ll see how this goes for now.

Now, fast forward a few weeks. The above mentioned sealant method worked okay for a while but the stem spacer soon started to swivel round again. A more drastic solution was required and that was to drill a small hole through one side only of both the inner and outer fork tube, then insert a small self-tapping screw. This method is very solid and the stem spacer has no way to move. Hopefully, problem solved.

After a few times out and about using the luggage described above, I soon noticed an annoying knocking sound. Closer inspection revealed this to be some of the more solid items, such as the water bottle, hitting the rigid plastic back of the pannier. I initially tried packing such items with spare clothing but all the bouncing about soon loosened them. I solved the problem by inserting a sheet of closed-cell foam, the same material used for camping mats, down the back of the pannier, and no more annoying knocking.

Update. I was never happy with using cable ties to secure the pannier to the rack and sourced some 10 mm P-clip, of the types used to secure mains electricity cables. I then removed all the plastic mounting points from the pannier and bolted the pannier direct onto the frame with the P-clips. A much neater and secure method.