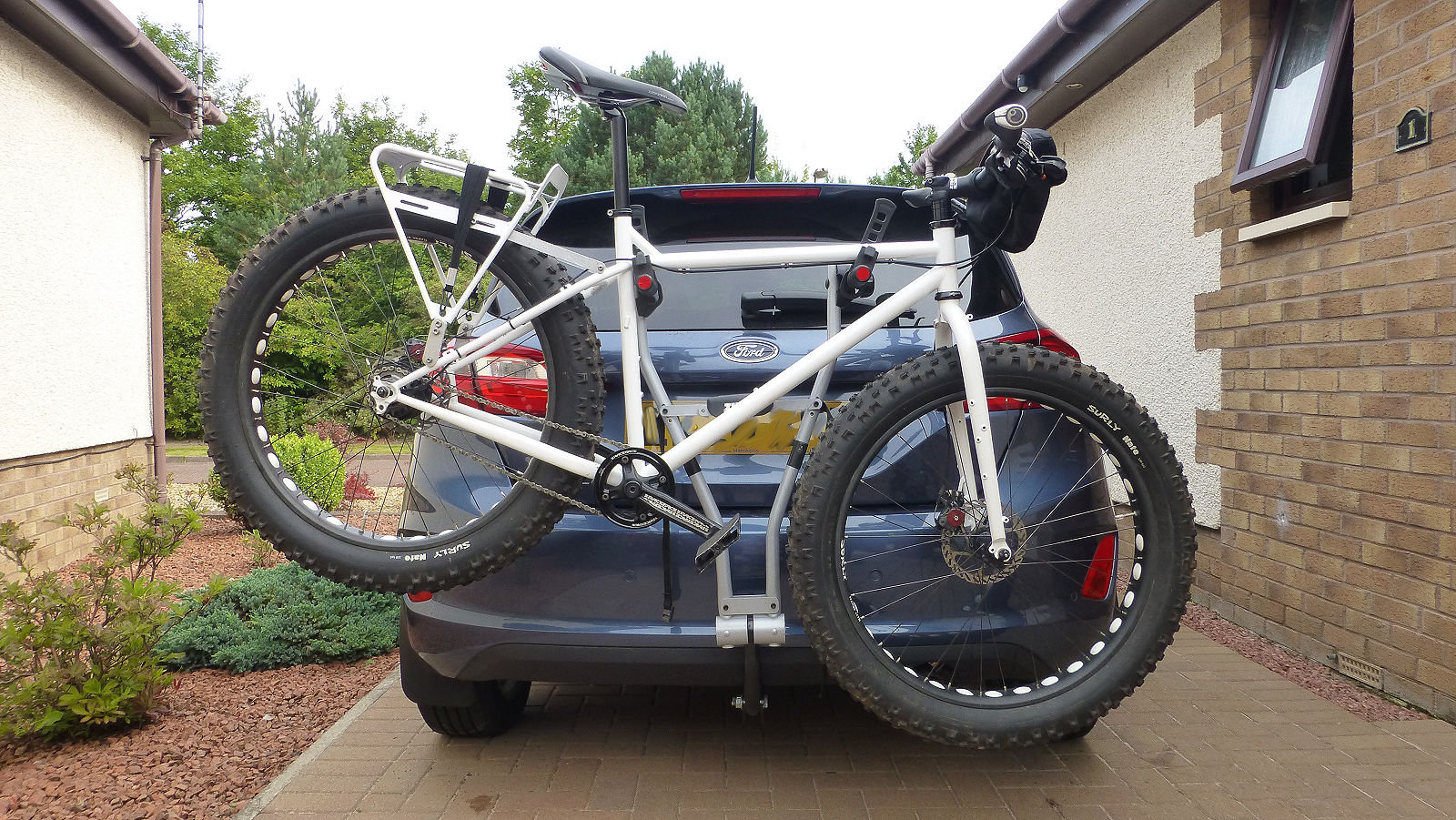 It was a simple statistic, on a small purple spot together with a number, that finally convinced me to abandon my self-imposed rule to avoid, as much as possible, using the car to travel out with my local patch to go turfing. It turns out I’ve taken nearby local zone WayOfBaird, 129 times. That’s one hundred and twenty-nine times, for goodness sake! Enough is enough, time to go somewhere entirely different instead.

Unfortunately, out wee Ford Fiesta is not bicycle friendly and refuses to take a bicycle in the back, of course, unless you strip off both wheels, which is a totally mucky palaver and you always end up with oil from the chain all over the place, mostly on me! Most assuredly a no-no. So, I needed a bicycle rack. Luckily, I kept the one from my Ford Focus, having stashed it in the attic for the day when it will be again required. The old adage never to throw stuff away is a good one. 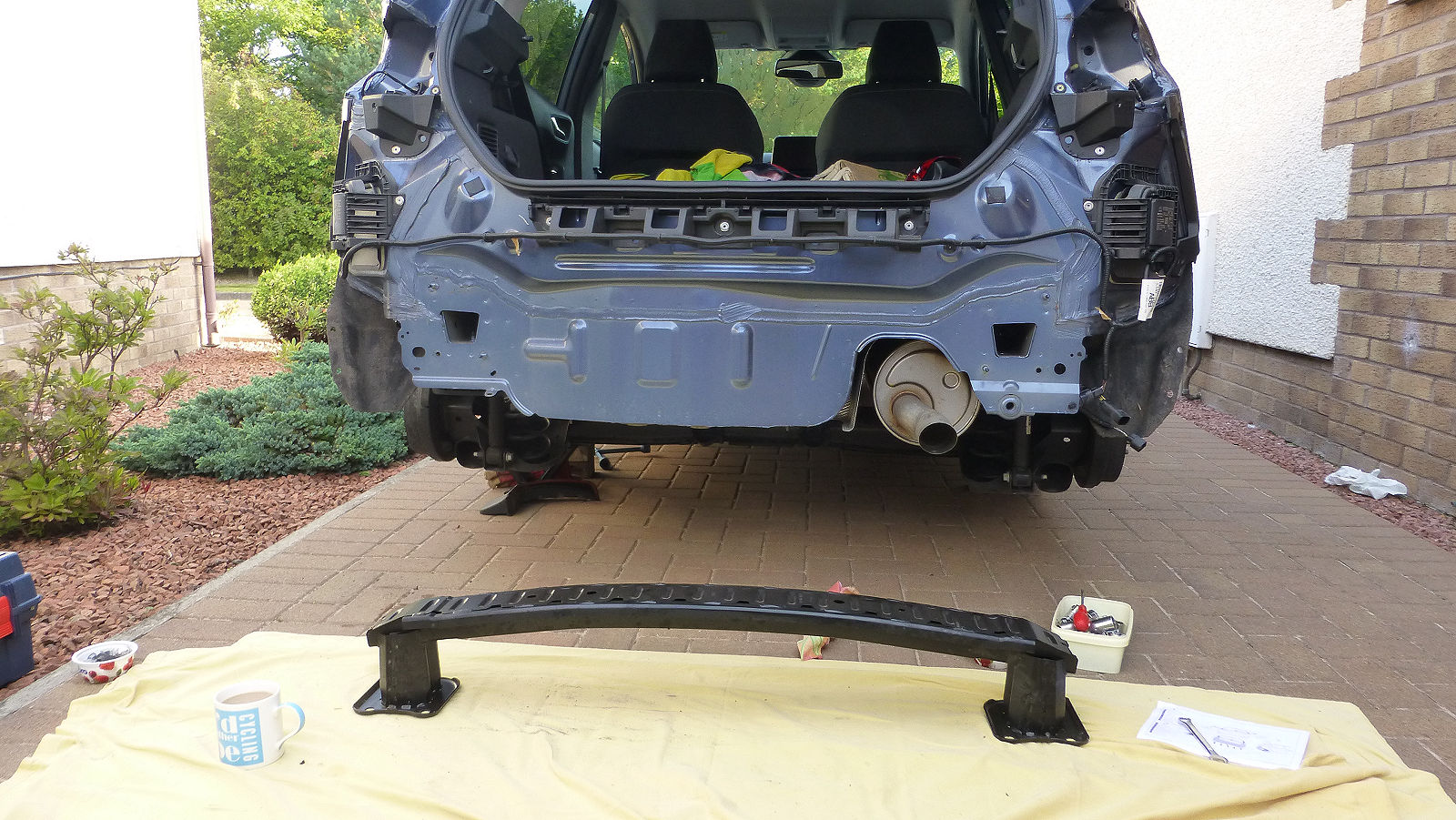 The rack itself is the tow ball mounting Thule Express 2, bought for about £50 on Amazon. It is so easy to use that even a 60-year-old pensioner could work it out, which is probably a good thing considering. To install, you hook the ball-mount over the tow ball and pull the arms apart. Pushing down the lock bar secures it in place. Simple. A padlock can be used to prevent any opportunist bastard from pilfering the rack while you are away cycling. It’s also easy enough to remove and dump inside the boot. The bike then hangs on the rails and is secured with straps and bungees. 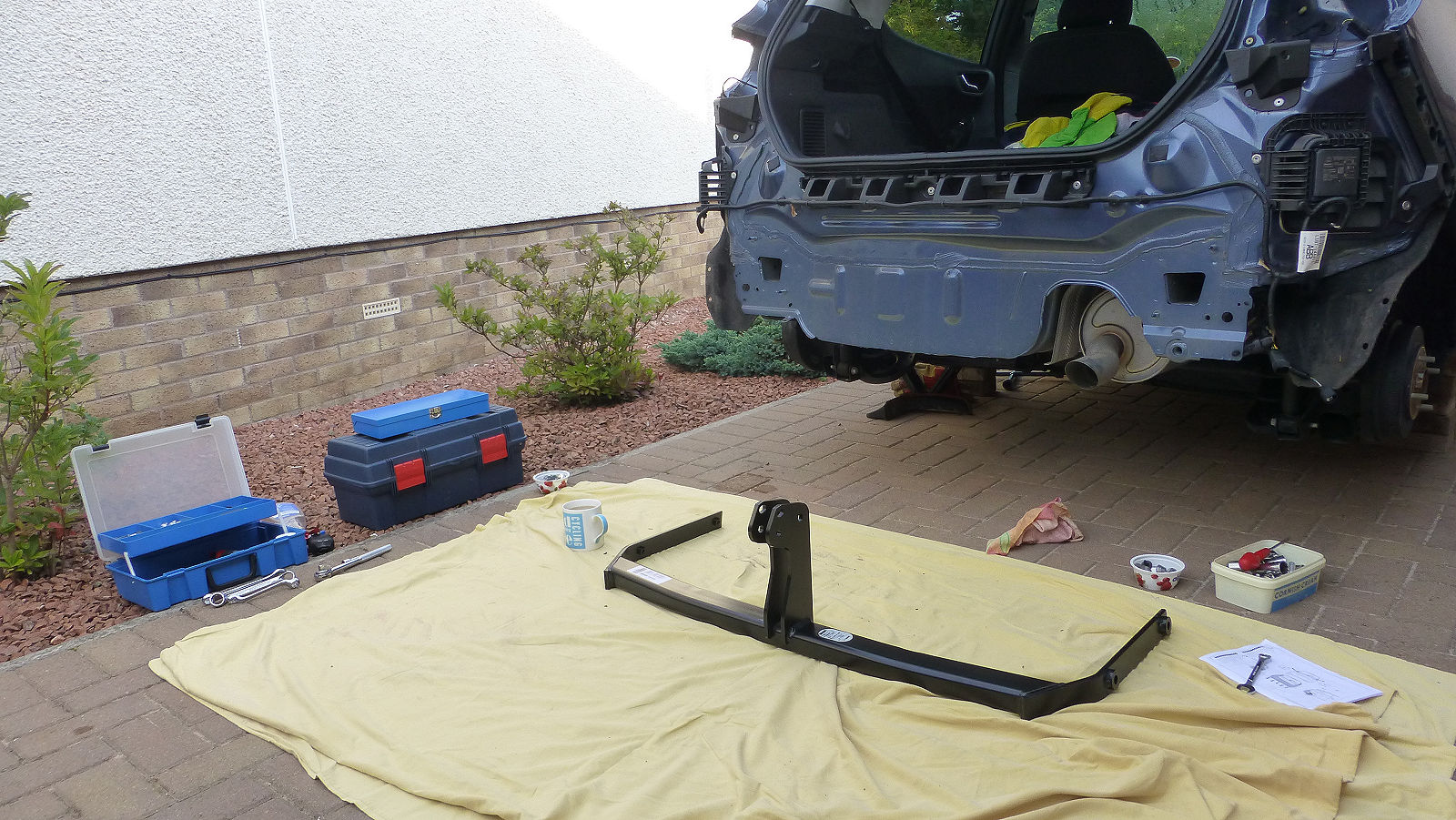 Installing the tow bar, a Brink swan neck model costing £120.00, is another matter. While the instructions often appear simple, always take them with a pinch of salt, a large pinch of salt, in fact better take the entire packet, particularly with relation to your vehicle, as it might not be the same as the diagrams show. First task was to remove the rear tail light clusters; no easy task I might add. In fact, I cracked the plastic on one, which was rather annoying, and even more annoying to discover the cost of a Ford OEM replacement part is £202.57. I can get a matching pair of third-party light clusters for £150.00. It’s going to stay cracked for the meantime. 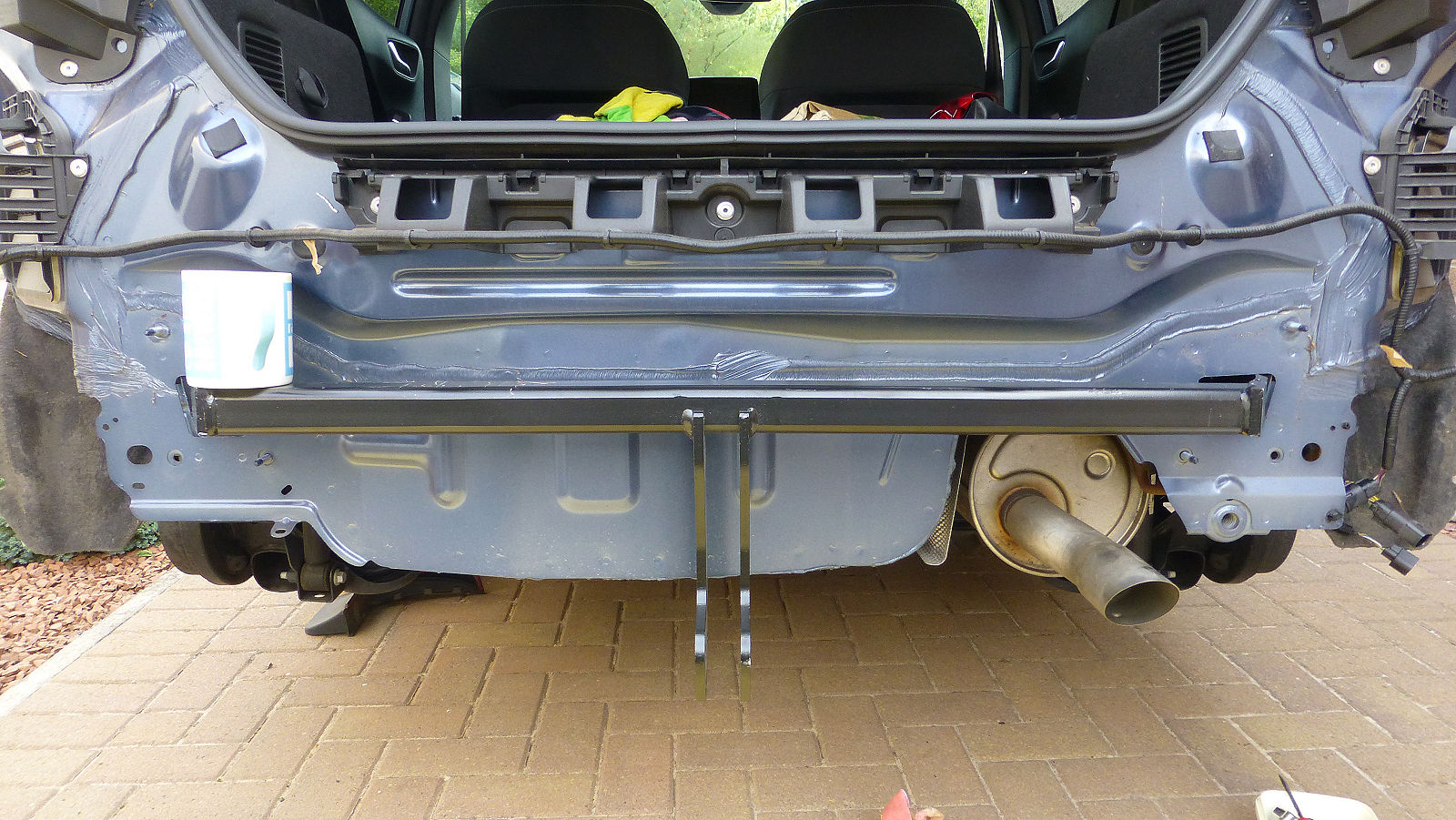 Oh, and the Ford instructions for removing the light cluster are not much better. It notes, “You cannot fully remove the wing nut” OH YES YOU CAN! And if not very careful, it will fall down and vanish into the bottomless Black Hole of the wheel well. Try retrieving it from there!

It took a fair bit of wholly-thinking to come up with a way to remove the tail light clusters without breaking them further. However, despite much head-scratching, head-banging and some strong coffee, I was still struggling. However, one of those new-fangled sub-atomic elementary particles, the inspiration particle, must has got through the grey matter and I realised I needed a custom tool. This turned out to be a scrap of 25 x 3 mm flat bar aluminium from the bike shed, wrapped in masking tape to prevent scratching. Worked a treat and both clusters were prised off without issue. 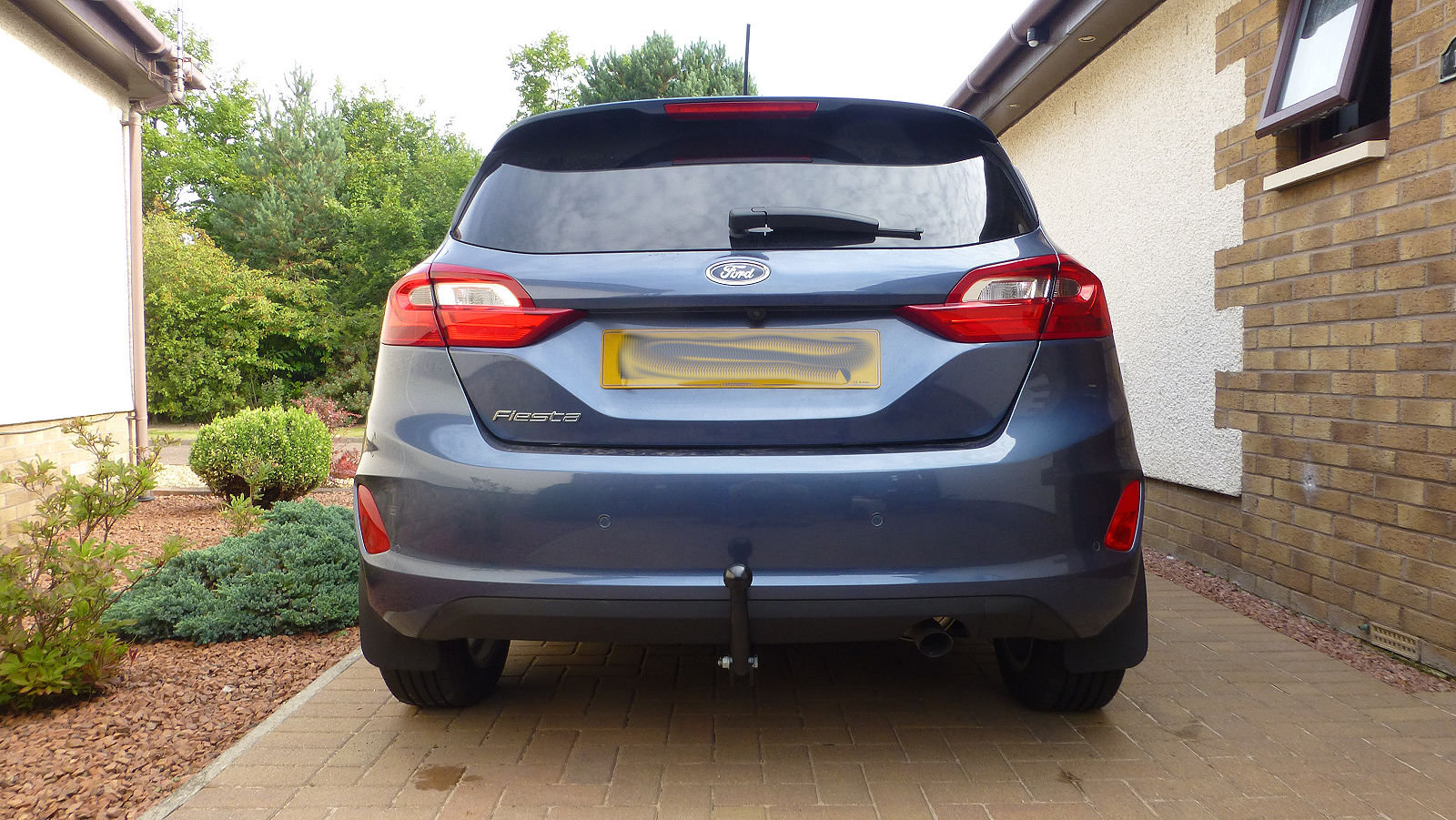 Next task was to remove both rear wheels. From previous experience fitting a tow bar to my previous car, a Ford Focus, and also earlier cars, it’s so much easier to access the bolts and, I must say, utterly and entirely stupid, one-use plastic fixing under the wheel arches. It also save blood, namely from avoiding skinned knuckles and ripped nails. Costs me a fortune getting my nails done, so want to avoid that. For safety, I propped the car up on bricks, and chocked the front wheels. Handy things bricks. I used to have bottle jacks, ramps and other assorted kit for working on cars but they’ve all vanished over the years. I wonder where they went?

It took a while using the ridiculously stupid car scissor jack you get with cars these days but 30 minutes saw the car ready to remove the rear bumper. Mind you, I suppose I’m actually very lucky that the Fiesta has a car jack at all. Many cars only come with puncture repair kits and no spare wheel. The tow bar instructions show that eight fixings must be removed to take off the rear plastic bumper. However, there were actually ten, and you need to remove the rear mud flaps as well. And there’s a couple of electrical connector blocks need separated for the reversing sensors and fog light. The really nerve wracking job is pulling the plastic bumper from its hidden, totally unfathomable, and easily broken plastic fixings. 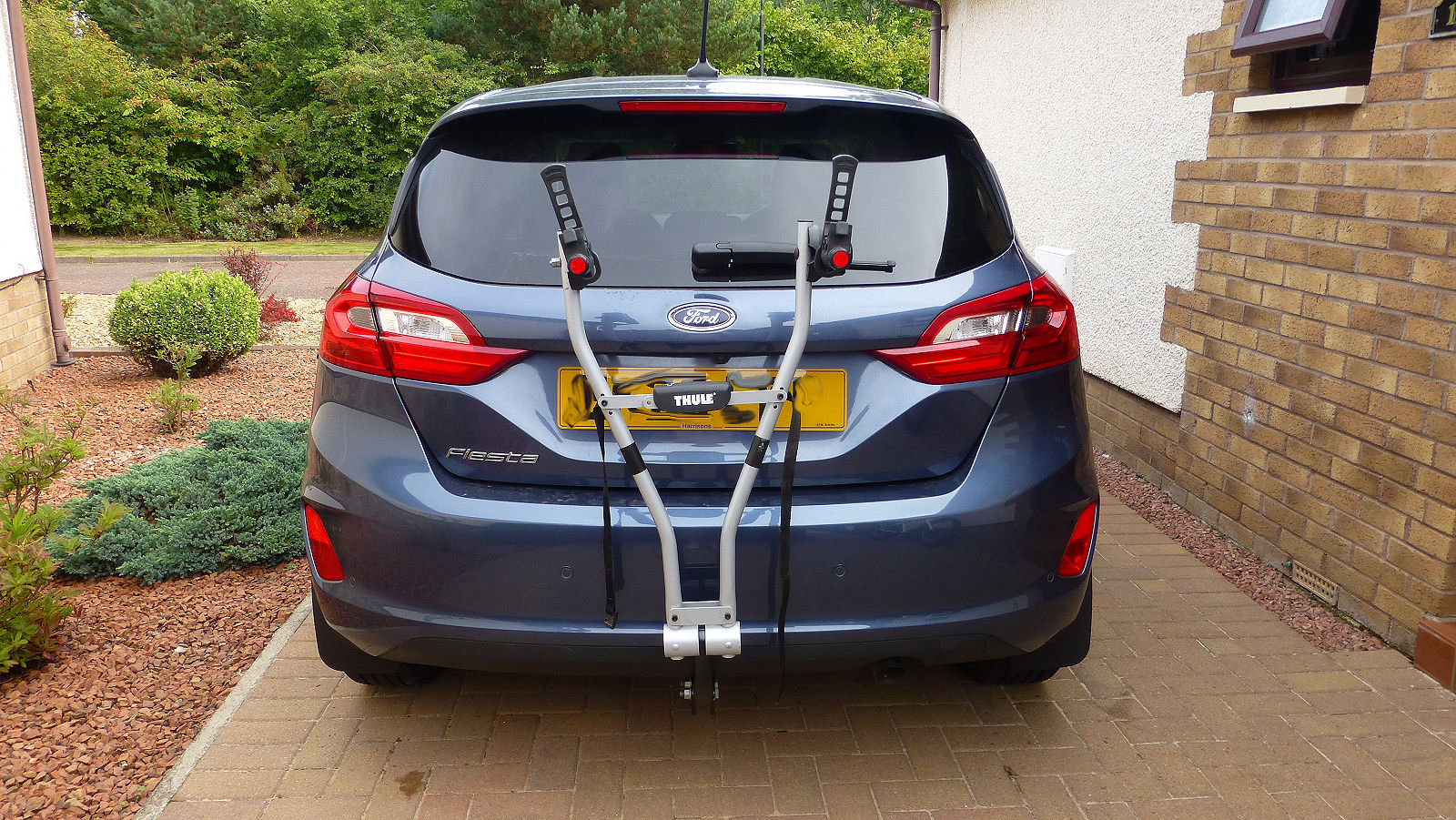 With the plastic bumper removed, it was time to remove the proper steel bumper underneath. This was perhaps the easiest job in the operation, with just four bolts to undo. Next, install the tow bar itself. My initial attempt to slot it into the chassis rails was unsuccessful and I was beginning to think I been sent the incorrect model for the car, or even ordered the wrong tow bar myself. However, it was this dunderhead himself who was holding the tow bar upside down. A quick reversal and in it went. It was quite a tight fit and required the use of a large set of persuaders, i.e. a hammer and wooden block, to correctly align the bolt holes. Four bolts then secured everything in place and were duly torqued up to the correct settings.

Re-assembling the car was fairly easy, a straight forwards reversal on the above, particularly now that I knew how everything fitted together. The last item to attach was the tow ball assembly. Two big bolts and that was that job done. On final check that everything was secure, all lights and devices were still working and one Brink tow bar ready for use. I’ve not installed electrics as yet. I didn’t seem to need them on the Focus, the lights seemed well enough visible. I was even followed by the local Police Interceptors one night and wasn’t pulled over, so should be good to go. The dedicated electrics kit is a whopping £140.00, so I don’t want to go that way unless I have to. Now, guess where I’ll be going turfing tonight? Clue, I’ll be taking the Surly Pugsley fat bike.