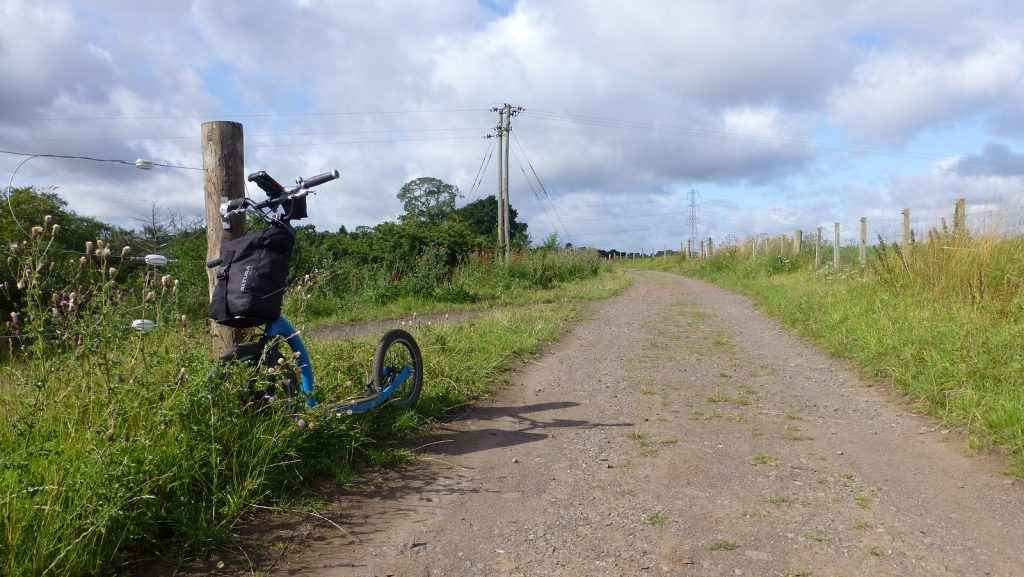 When I used to work to earn a living, well, attend my place of work anyway, you had days, one-of-those-day and better days. Days were just days when nothing went wrong and events chugged happily along without issue. One-of-those-days were days when everything seemed to go totally haywire and I mean everything, one thing after another, like a chain reaction. Better days were just that, when everything seemed generally better, things worked better than expected and life was good and dropped toast always landed butter side up. Now that I’ve been happily retired over a year now, I’ve come to realise that every day is a Better day, with a capital “B”. And I can do all the silly things I want at night without being concerned about having to work the next day.

So, I’m out again in the dark and lonely wee small hours, just after midnight, energetically kick scooting the Swifty Air first down through Eskbank, then Dalkeith town centre, heading for Dalkeith Country Park and collecting 10 easy zones along the way. Why? Yes, you may well ask and I often ask myself exactly the same thing. But this night, I didn’t really have any logical reason other than combining the delights of being out in the still of night, with turfing zones and with kick scooting with Swifty Air. There had also been mention on turf chat by MuttsCycles of trucks arriving in the Dalkeith Country Park and I guess Mr Nosy Parker was bothering me was well.

I’d expected to use my Acorn Pass to access the gate but it was open, sitting slightly ajar, unlocked. Not sure if it was broken, as it has been in the past, or deliberately left open for the contractors I could see working in Steel Park. Looked like a scene from Close Encounters with all the bright floodlights and vehicle lights. A check on the mobile phone revealed this was preparation for the Let’s Rock event on Saturday 18th. I think I’ll stay clear that night. Guess it would be difficult getting in the gate without a ticket (£63.00 is the cheapest) anyway. Hmm, there’s always the hole-in-the-wall at Newton Church?

First zone in the park was Restoration, down at the main buildings and beside the ruined orangery, and I half expected a visit from park security as there’s cameras all over the area but nothing happened and I was soon blasting along the road heading towards my next two zones, TheUnknown and YouAreTheAce. These two zones are on the so-called “horses only” track where I, and others, have encountered hostility from horse riders. Shouldn’t be much chance of that tonight. Not sure if you can fit headlights to horses or not?

The smooth tarmac was a delight to kick scoot along with gentle gradients and a tail wind pushing me along. I soon encountered my first badger of the evening, rooting for worms along the verge. It took off like the clappers and vanished through the hedge. It was odd being here alone at night, normally there’s people all over the place but it was strangely peaceful all the same. The road rises steeply over the A68 but your efforts are rewarded with a fast downhill on the other side. There was no traffic on the A68 road.

The track to the two zones, TheUnknown and YouAreTheAce, named on older maps as Eastfield Wood, is rough, all churned up my bloody horses and often muddy in places. It seems a long way to the zones but is only 1 Km, just over half a mile in old terms. It seemed shorter on the way back for some reason. I was very conscious of possible ticks lurking in the long grass along the track and stopped to give myself the once-over when back on the road. Must have looked a sight to behold, standing with my shorts at my ankles shining a torch all over my body. Good job there wasn’t any folk about.

I then followed the track, looping around to the left and back towards the park. A few bats showed up in the lights and a dog fox crossed the path ahead of me, pausing to check me out before slipping away into the night. My next zone was BridgeOfFaith, then it was back up the wee hill and onto the track that parallels the city by-pass. Zone HowlandsPark was next, then I was onto the smooth tarmac again which I followed out as far as the King’s Gate. More badgers again, feeding along the verge. Both kept on feeding, so I guess they didn’t notice me passing on the near silent and stealthy kick scooter. I left them to it and veered left for the path towards Lugton, the one that follows the wall beside the A6106 into Dalkeith.

Picked off zones LugtonBrae, LugtonCross and SneakyPlace before heading back out towards the town gate. All was quiet at Steel Park. Looks like the contractors have turned in for the night though the place still looked like that scene from Close Encounters when the alien craft lands on the Devil’s Tower. A different route back to Bonnyrigg gave me another five zones. The streets were deserted other than no less than three foxes, yet another badger and a million rabbits on the cycle path. And that was that. Home again, wash up, cup of tea and bed.

Now, before we finish. I was on the bus into Edinburgh the other day and a platoon of a dozen or so playgroup children along with 3 or 4 of their harassed wardens/keepers clambered aboard the No 31. Immediately the term Minions came to mind. They were all wearing little hi-vis jackets, walking hand-in-hand in pairs and making the usual racket that children make. Then an ambulance passed the bus stop on blues-and-twos and immediately two of the Minions, sorry children, started up crying bee-do, bee-do, bee-do, bee-do, bee-do, bee-do. And to top it all off one of them was carrying a banana! Bet he was called Kevin. Even the chat from the back of the bus sounded like Minions. Amazing. Back soon.