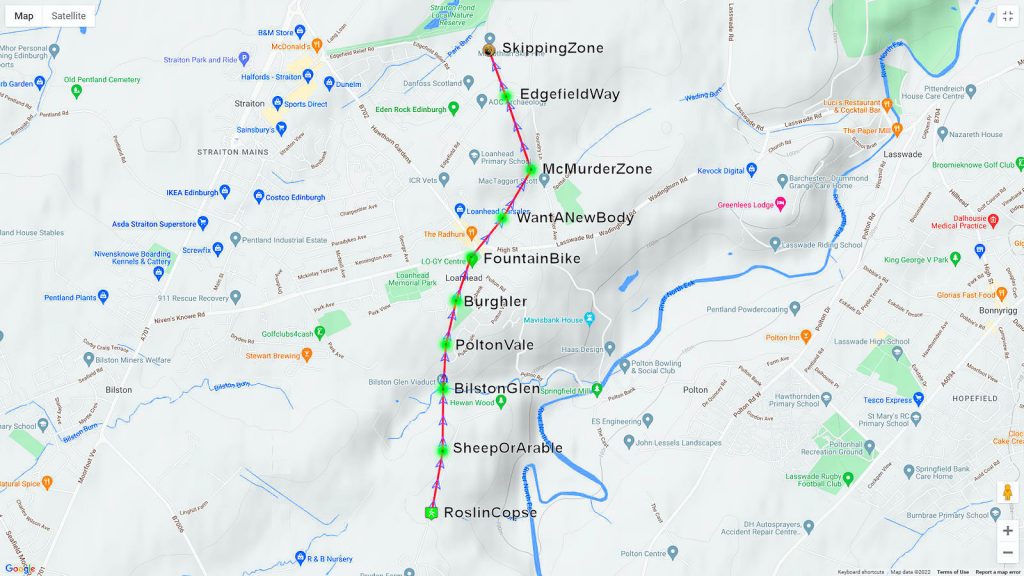 Famous throughout Scotland, talked about in hushed tones in public houses and coffee houses, mentioned in the Scottish Parliament by Nicola Sturgeon and home of squirrels, beavers, weasels and ferrets. Yes, the stretch of old railway line between Roslyn, passing through Loanhead, once a busy branch line and home to steam trains and train spotters, and now known in turf circles as the Loanhead Ferret Run. The place where turfers might cheer in mighty triumph, or sob pitifully in dismal failure, after their attempt at gaining, or perhaps not, one of the four Eager medals.

There are four Eager medals, as follows:

The zones here are just about perfect for attempting any of the above Eager medals. The 10 zones are spaced along a 2.5 Km length of disused railway line now surfaced with tarmac as a shared cycle and walkway and they are RoslinCopse, SheepOrArable, BilstonGlen, PoltonVale, Burghler, FountainBike, WantANewBody, McMurderZone, EdgefieldWay and SkippingZone. The line runs roughly towards north-south and is generally either flat or with a slight downhill gradient typical of railway lines. There’s just the one short uphill in Loanhead but nothing to worry about.

So, you want to try for one of the Eager medals. What should you be thinking about? Let’s look at mode of transport first. The route is actually suitable for anything legal as per turf guidelines, with the exception of a motorcar or motorcycle which are not permitted on the route. The quickest would be the bicycle, with the e-bicycle obviously being quicker still but the choice is yours. You can walk, run, cycle, kick scoot, roller blade, ride a horse or ski if there was enough snow on the ground.

With the bicycle being perhaps the best transport option, what should we be thinking about to assist our attempt. Firstly, your steed should be in good order. Tyres pumped up the max, brakes in good working order as you will need them and as little weight as possible. No need to go to extremes such as shaving off all your body hair and going skyclad, but every little helps. Leave anything you can detach from the bike hidden near the start and retrieve it later. Note that a road bike with skinny tyres will be faster than a knobbly-tyre mountain bike.

The next question is when. Now, the route is often busy during the day with weekends and public holidays the busiest. The walk is popular with all manner of users including people out for a stroll, runners and joggers, dog walkers, commercial dog walkers with packs of dogs, horse riders and even herds of horse riders from the local riding stables. So, it makes sense to choose the quiet times of the day. Early mornings and late evenings are good but during the night is best from my experience as you will likely encounter no-one and have the place to yourself.

Direction of travel is the next question. Should you go Roslyn to Loanhead or approach from the opposite direction? The guiding factor here would be the weather and particularly wind direction. The prevailing weather is from the west or south west which would place the wind roughly behind you and give you a helping hand. So, starting at Roslyn would be the better option here. You will also benefit from the favourable gradient as well. It would not help if another Beast from the East storm was hitting you head on in which case travelling in the other direction might be better. Or pick another, more suitable weather-wise, day.

Now, a look at your mobile phone and the turf app setup. If cycling, a handlebar mount is really useful. Another good idea is to switch on notifications for taking zone, leaving zone and zone taken and turn up the volume so you can hear the notifications easily. You want the screen zoom at such a level that you can easily see when entering the zone but not so far zoomed in that you don’t get decent advance notice of approaching the zone. Choose what suits yourself.

Next, there are few things you need to watch out for along this route. Being an old railway line, it has a few low-lying sheltered areas that hold the cold in the winter and frost or ice can linger. Around the bridges in Loanhead there are also low-lying parts where water accumulates and even in summer, slippery muddy areas are a possible hazard. Trees also overhang the route so watch out for wet leaves and fallen branches. Broken glass has been encountered around Loanhead, seemingly thrown from the bridges.

There is something you will probably do anyway and that is to leave your GPS on during the attempt. This will give you a 5 second bonus off your take time for each zone. That’s a good 50 second deducted in total, so worth going for. A good tip is to take another zone before you start your run. This will include the 5 second bonus in the starting zone. There is another 5 second bonus that applies but only if you are wearing the Region Lord crown. This is granted to the player that currently owns the highest number of zones in a region. Again, another 50 seconds off your time.

So, what kind of times are we talking about here. My own best time, taking on a bicycle is 9:01 minutes and I tried on the kick scooter recently and managed a time of 11:25 minutes. Today, there are 53 Scottish turfers who have completed the run in under 10 minutes and they can be viewed on Warded. The best time for the Loanhead Ferret Run to date is by turfer Cruachan with an astonishing time of 6:08 minutes, well deserving the un-official Planer Gary title of Turfinator. The Eager Ferret has actually been achieved quicker than this but not at this location. It was done by turfer Recycling in Sweden with a time of 4:45 minutes, over a distance of 2.20 Km. I suspect this cannot be bettered here in Loanhead but you never know. Perhaps with an electric bicycle?

Before we go, there’s another possible collection of 10 zones that might just be suitable for the Eager medals. They run along the old railway path between Roslin and Bonnyrigg, starting at zone HalfwayPath and finishing at zone WaverleyPath. The distance is around 3.3 Km, a bit longer than the Loanhead Run but the downhill gradient might just even things out. But more of that another day.

And that’s about that. All that remains is to wish you good luck, may the force be with you and I hope you get the Eager medal you are aiming for. Even if you don’t, you can always try another day. Enough for now. I did three hours on the kick scooter last night and need some sleep. Back soon.