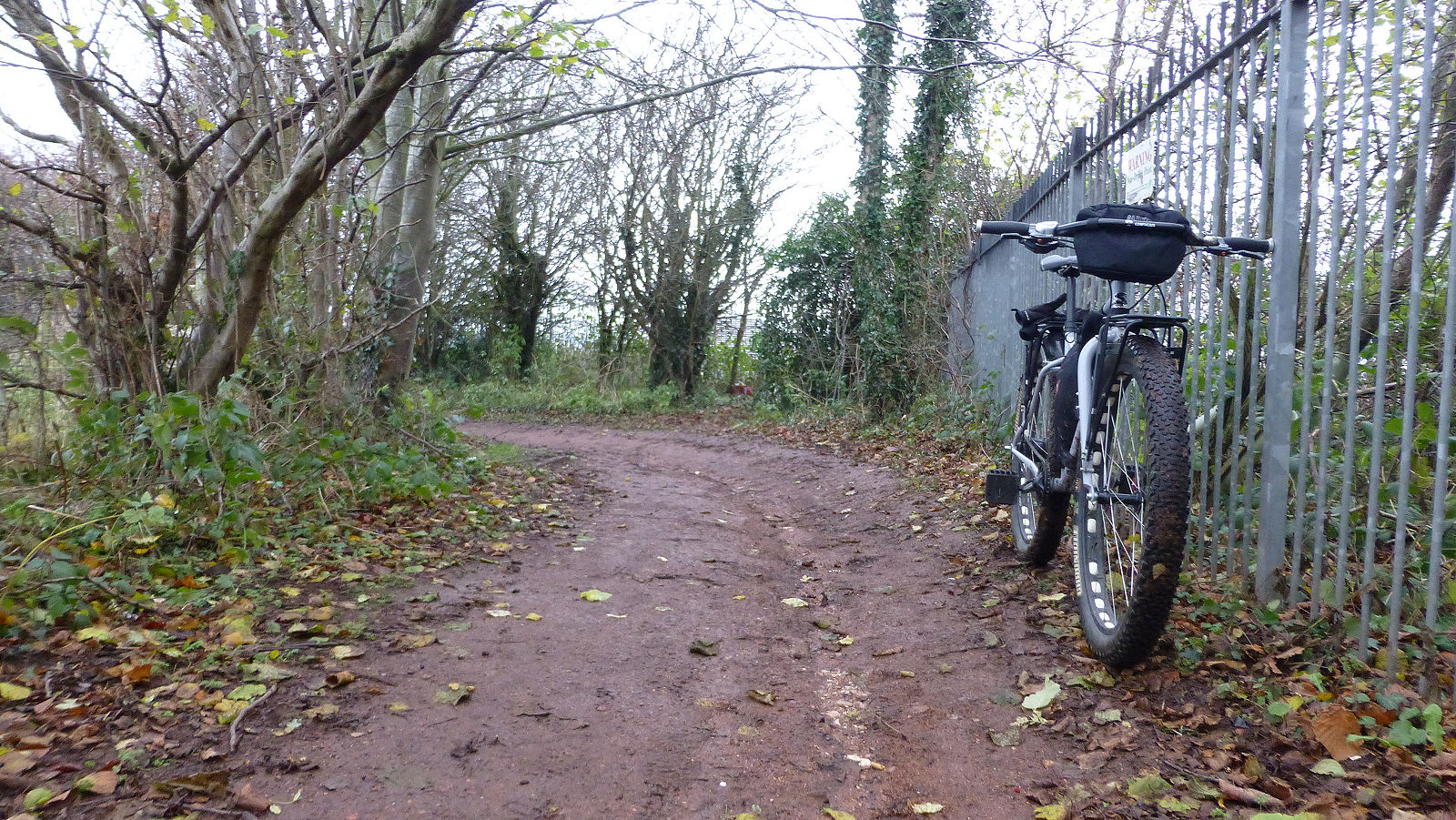 As part of my plan to create a 50k off-road cycle route I’ve taken to call The Grand Trail, I knew of some local trails to the south, on the high ground above Newtongrange, leading from Camp Wood to the village of Edgehead, not an area of ground I was familiar with. The weather forecast was for an overcast dull morning with rain in the afternoon, so waterproofs would be a good idea. The route was around 13 miles so should be easy enough to complete in the morning then back home for lunch.

My route starts with an unavoidable but short stretch of the B706 leading to Gorebridge, before slipping onto a narrow trail heading up hill beside a new housing estate. Being the middle of December, the grass track was now a mud track and with limited traction, I ended up walking more than riding for this section. Metal mesh security barriers from the building site were also encroaching on the path, making progress even more awkward.

At Stobhill Road, I was able to pick up a sigh-posted route for Camp Wood, the track starting off well-graded but soon turning into a water-eroded canyon with ruts deeper than the wheels of the bicycle. Again, I was back to walking again and reminded why a bicycle is also called a push-bike? The area I was now passing through was once a thriving quarry, though long having been abandoned. Plenty of signs of fly-tipping and quite a few bricks lying about, so a return visit is a must for some brick spotting. 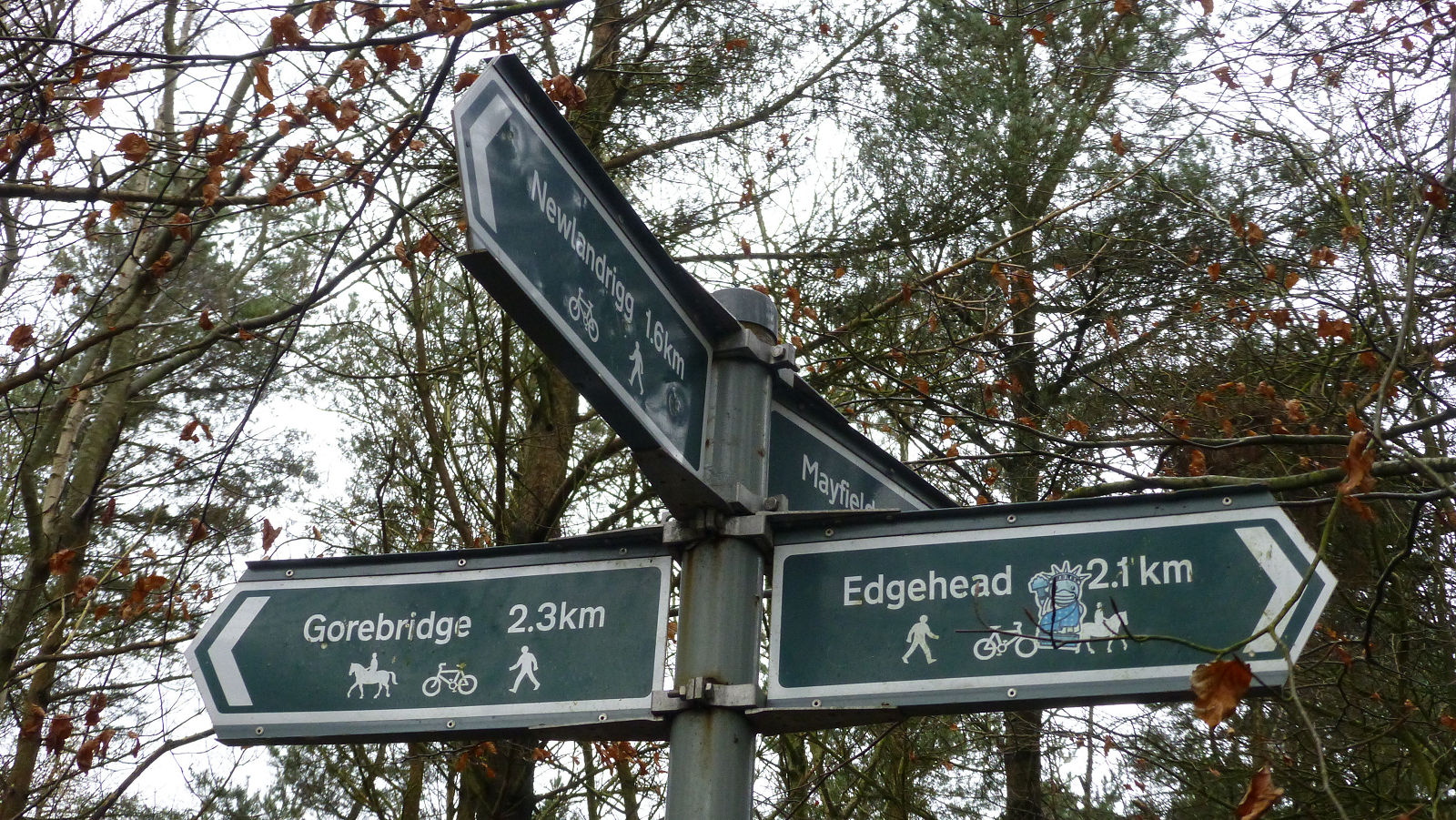 The top of the hill is reached at, oddly enough Hillhead, where I pick up another trail heading towards Edgehead. The land here has been fenced off with some a dozen or so different compounds, each holding a variety of different livestock, including sheep, chickens and donkeys. Because of this, I lost count of how many gates I had to pass through, some padlocked and requiring lifting the bike over. This also seems to be a horse riding trail, so I’m not sure how you lift a horse over a five-bar gate?

Eventually, after much slithering and sliding in the mud, the route emerges from the woodland onto a tarmac minor road. There a sign-post indicates Edgehead, visible across some fields in the near distance. Now, if it was summer this next half-mile section following a grass track across fields would be pleasant and enjoyable. However, this is December and it’s been raining heavily the past few days and the ground is waterlogged. I was tempted to find another route but decided to go for it. 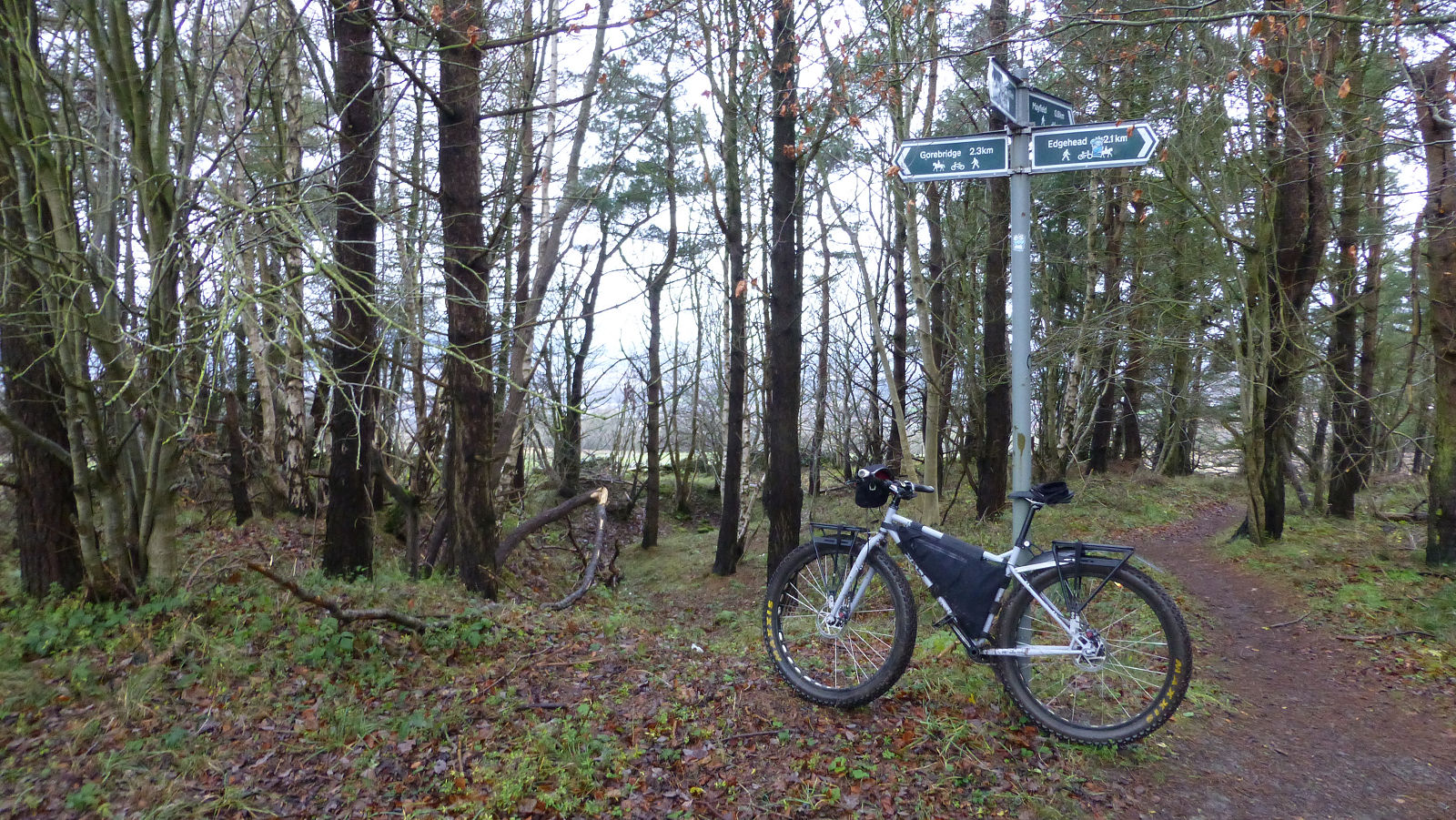 Crossing the field was interesting to say the least. Not only was the track along the margin waterlogged and churned up by horses but the stubble field itself was also waterlogged and both made for much sliding and slithering about. However, the Krampug with its 3″ wide tyres got me there relatively mud free. The route then continues through a small wood, soon bringing me out into Edgehead village itself.

It was starting to rain more heavily now and rather than return the way I’d came, which was my original plan and would mean heading back uphill across that muddy field, I decided to drop down into Newtongrange by the quickest route, following more mud trails, waiting at one point to allow a group of horses to pass and then on fast smooth streets and footpaths back to base. Overall, quite an enjoyable ride and one I’ll repeat again, perhaps in drier conditions. I’d also noticed a few other signposted routes to explore as well.