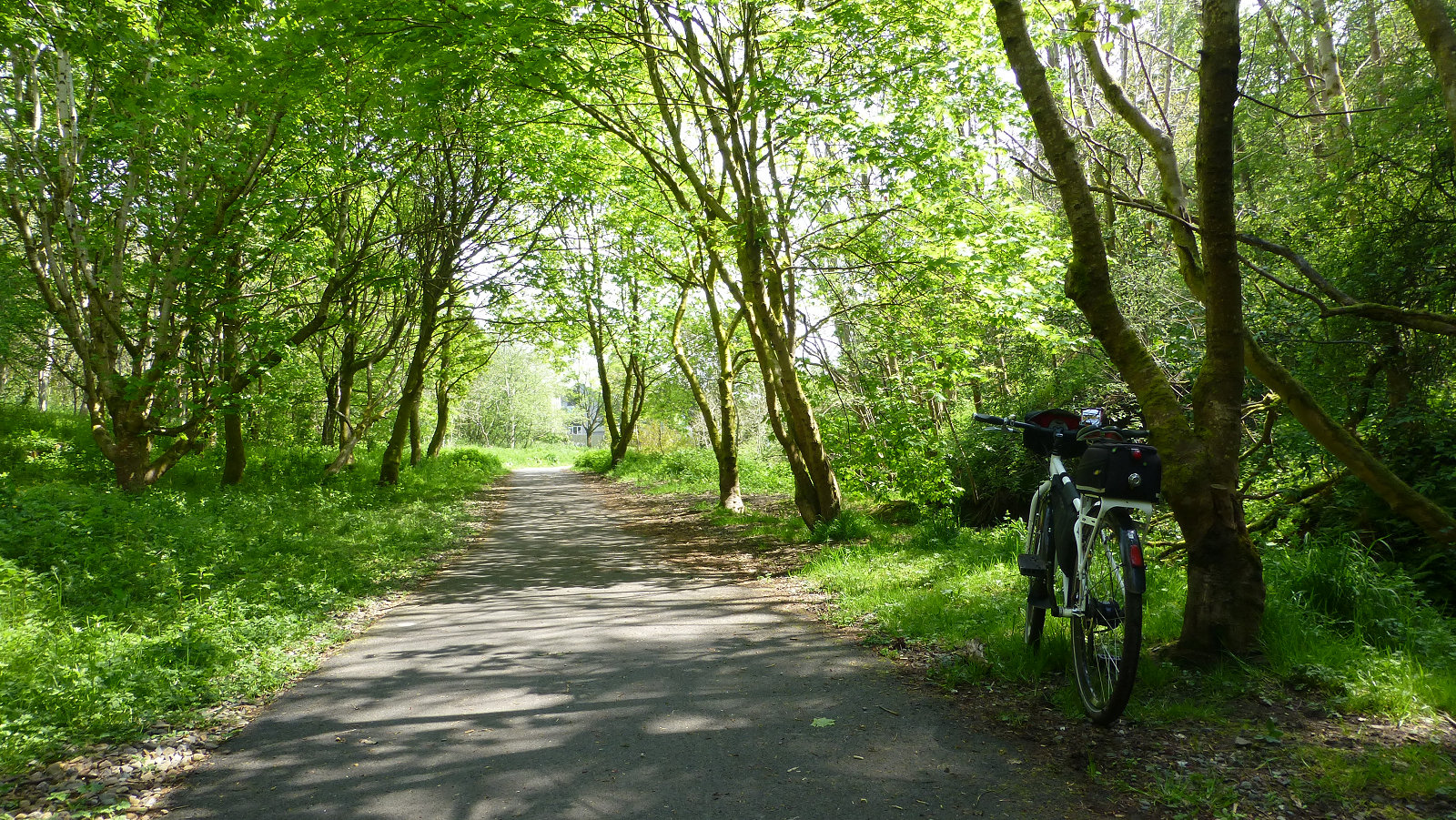 My mission today, which I did chose to accept, was to turf the fine town of Penicuik and surrounding area, the local patch for the legendary Three Turfers of Penicuik, otherwise known as Hodge, SparseRunner and Aibo. With around 60 zones in total, and most of them uniques, it would be a tall order to take them all in a single visit, particularly when cycling to and from Bonnyrigg. So, I decided to split them into two trips. My first trip would be to take all the outlying uniques, for example, those on the Howgate side and the Penicuik House estate. This would leave the zones in the town itself for another day.

My route followed the Dalkeith to Penicuik cycle way, first through Bonnyrigg, then Rosewell, stopping at any zones for a few meagre revisit points, as I still held these zones. It was only after Rosewell that I was able to start actually taking zones and adding a few points. Having done this route a few times most of the zones where not uniques but two had been added since my last visit during the winter and both were added to my unique total. 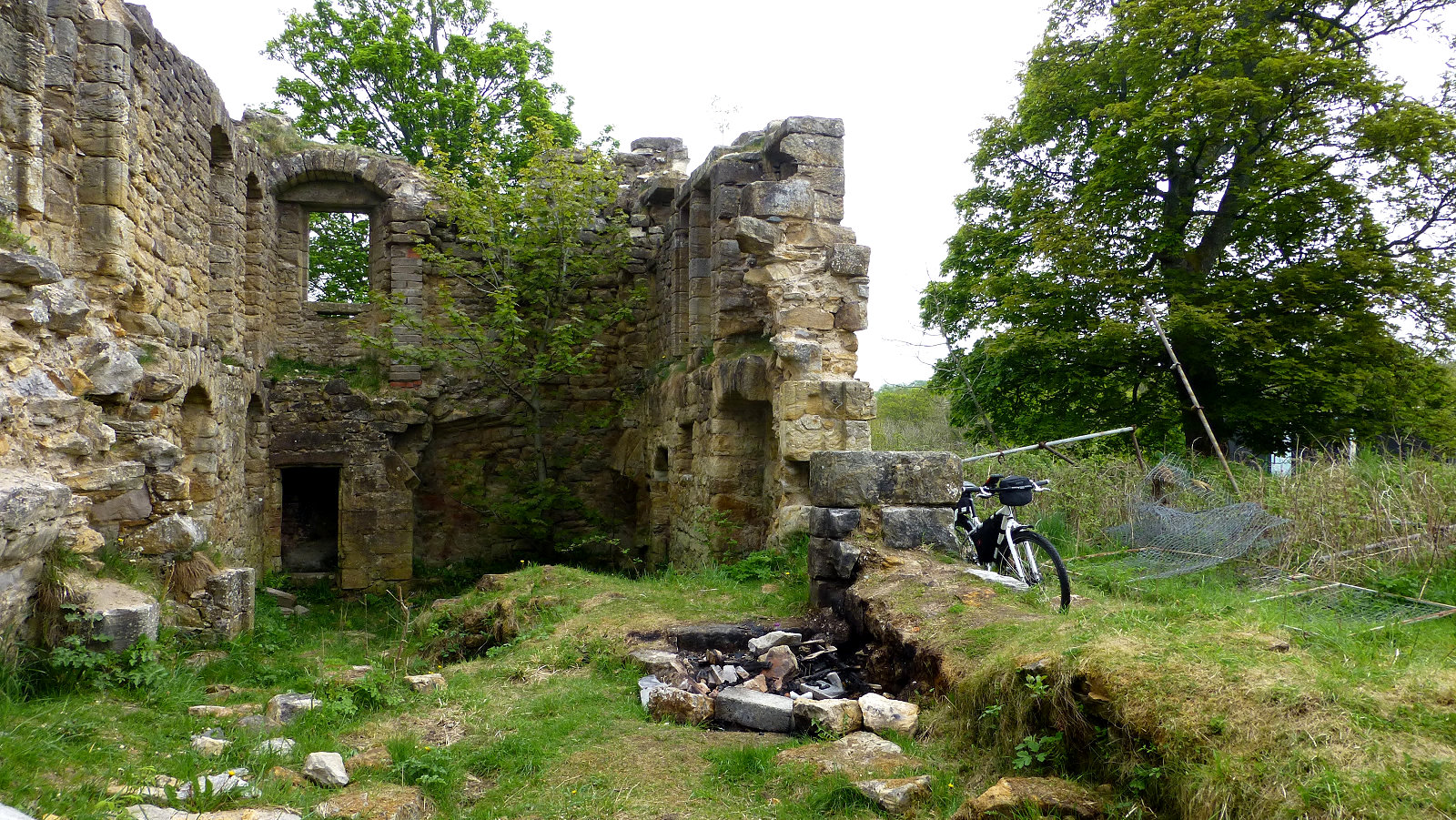 After zone Valleyfield, I was venturing into new turf territory, with my first target being zone Uttershill, a ruined castle to the south of the town. A short but steep climb up a minor road wasn’t too bad and the castle is easy enough to access. I’ve had it in mind to visit here for over 30 years but never got round to it until today. Next, a single zone in Howgate, over a mile away on the B7026. Next zone was RamsayMemory, located out in the middle of no-where and with no obvious easy tracks in the area, at least as far as I was aware, this area being new to me. Rather than return to Penicuik and climb all the way back up again, I cycled towards Leadburn, turning right for short cut before Leadburn. Then a fast cycle along the A701 brought me to the area in question.

I thought I could reach it through Ravensneuk Farm and dropped in to ask directions but they did not seem all that happy to see me but did give me a couple of suggestion for getting to the monument. One was across fields with the other to drop down to Penicuik and climb a footpath all the way back up again. Not liking the latter much, I opted for the former option, though it was far from an easy cycle along grass tracks and involved much lifting of bicycle over gates, walls and barbed wire fences. I did wonder what the local turfers might make of my antics, should they be watching? If you are thinking of following this route, it took me over an hour from leaving zone Valleyfield, to take zones Uttershill, TrickyLock in Howgate and RamsayMemory. A terrible rate of three zones an hour. No medals for that then? 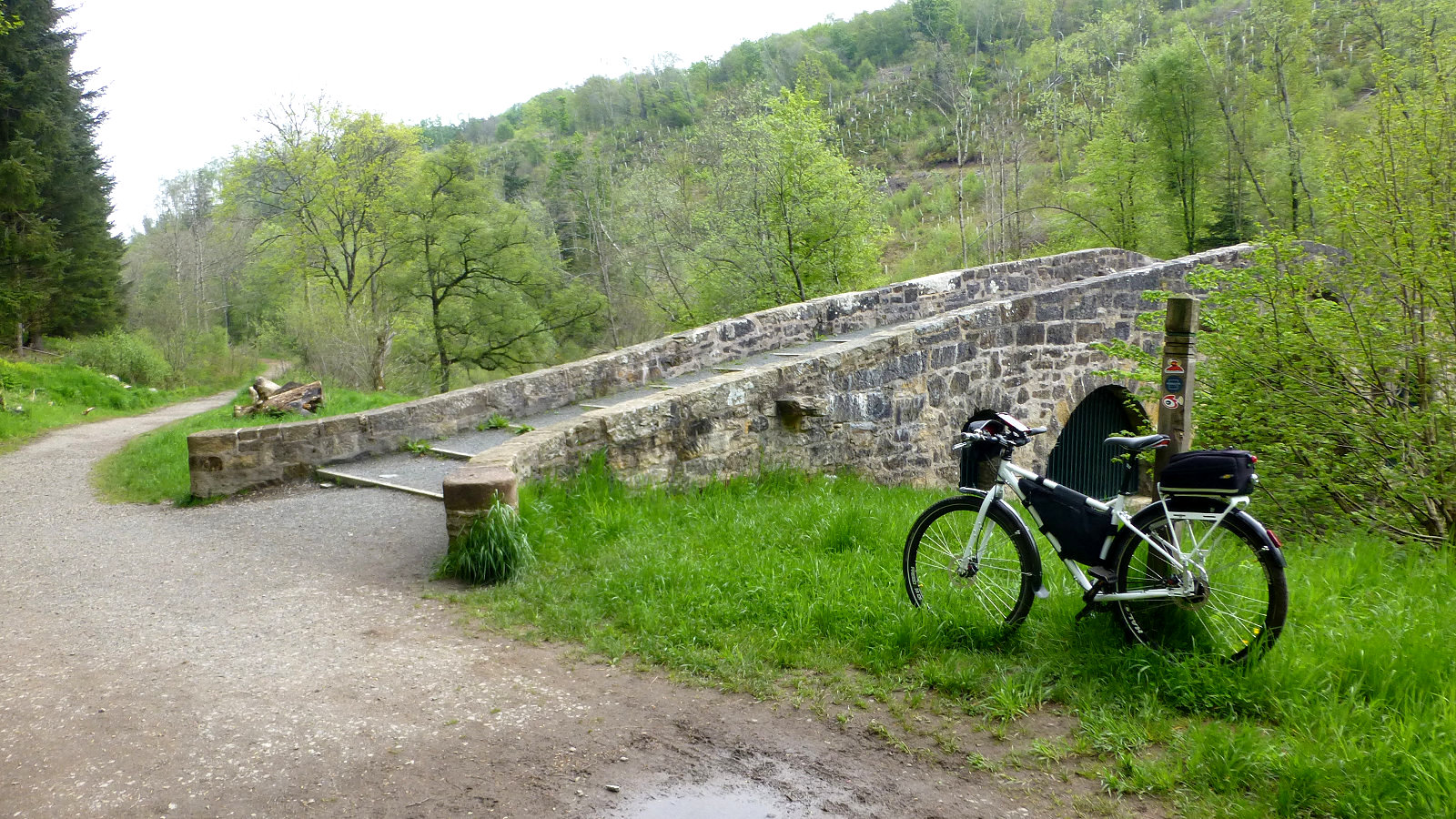 Next zone on the list was GettingThere, and it certainly lived up to its name. I knew there was a footpath above the zone from a previous visit to investigate a landslide and reckoned if I crossed a field of vicious attack sheep would be able to join the path, which proved to be the case. I encountered a couple of snooty horse riders and despite stopping, moving off the path and stepping from my bike, still got a frosty reception. Was also informed one horse was scared of bicycles. It must have been listening because it proceeded to do a merry dance, jumping all over the place before the rider calmed it down. I would hate to think what would have happened if I rung my bicycle bell? Zone GettingThere proved elusive, at least as far as finding an easy access to the zone. There was no obvious path to the zone and it was only later when I spoke to Hodge that he confirmed that a rough through-the-woods hike was required. I decided to leave it for another day, returning on foot.

Giving up on GettingThere, because I couldn’t get there and no-way was I leaving Ogre unattended, I dropped down into Penicuik and cycled along the north side of the North Esk towards the Penicuik House estate. There were eight zones in the area and I managed to take all but one, Paradise Lost. There did not seem any easy logical routes round the zones here and copious numbers of No Access and Private signs and locked gates were most off putting. However, by zone Carsewell, I’d lost my ability to read signs and cycled through the farmyard anyway. I am such a naughty buy! 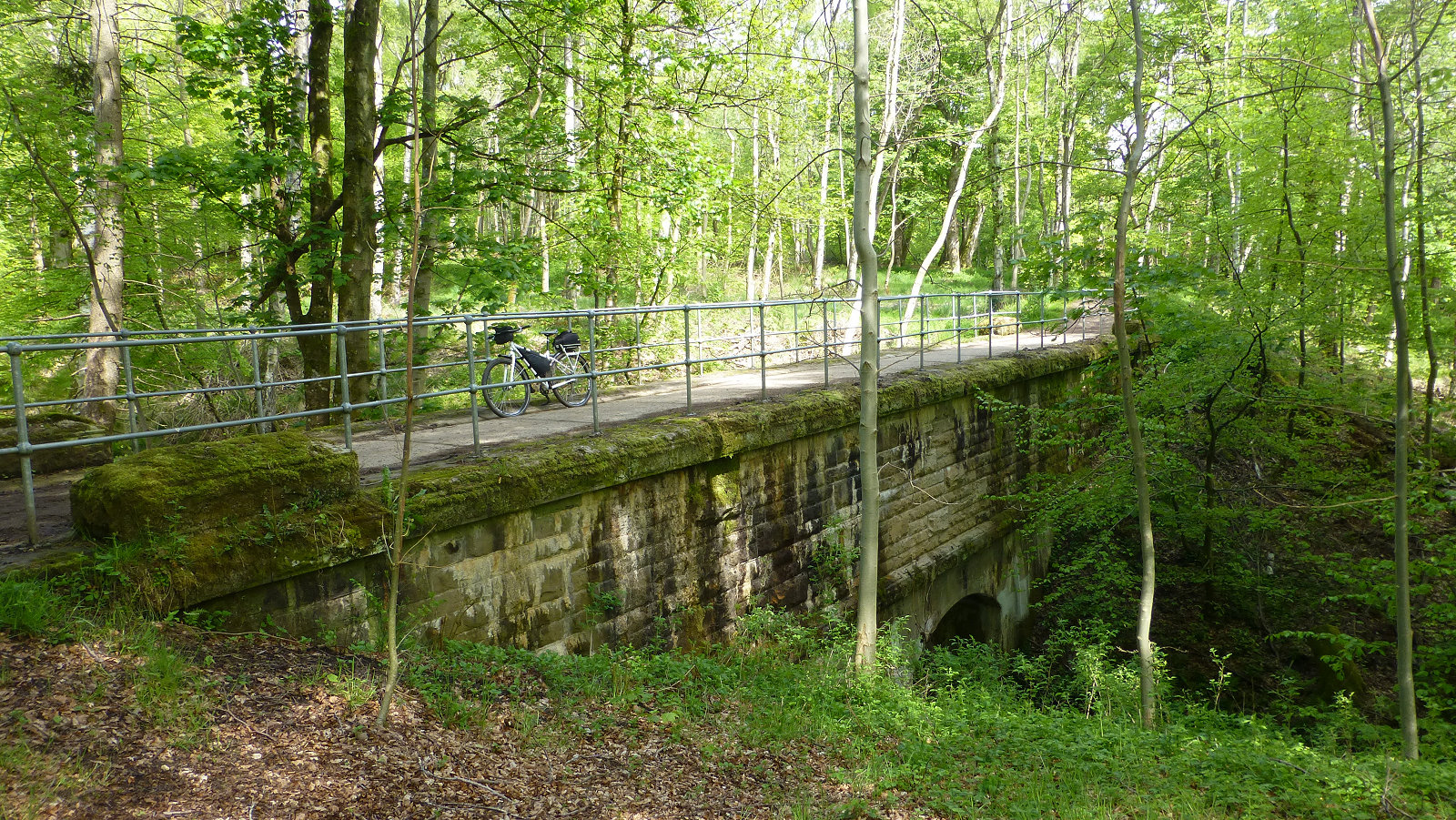 My next targets were a trio of zones located in a long wood to the north of Penicuik House. The first was AgentCooper, an obvious reference to Twin Peaks but not one I can work out. Perhaps someone will enlighten me? Next zone was LowriesDen and a very pleasant spot it was. The combination of bright sunshine, fresh green leaves on the beech trees and birds singing all over the place was magical. At one-point traffic noise vanished and I found myself thinking I was in Tolkien’s Middle Earth, in the Shire, half expecting a hobbit or a member of the elven race to suddenly appear. A car horn broke my revelrie and I was back in the real world again. Zone LawheadTrees was awkward for the GPS and I had to scramble away from the path to get into the zone. Would be better if the zone was about 5 m to the south-west.

My plan now was to tick off the zones along the small streams that cross Penicuik, then re-join the cycle way for the cycle back to Bonnyrigg. At zone LawheadBurn, I was surprised to hear my name being called. Looking about I was initially unable to local the caller but another shout and I spotted someone waving across a hedge in a nearby house. It could only be a turfer calling my name and the legendary turfer Hodge it was. We chatted, as turfers do, for a while, and I gained some useful directions before we parted. Hodge heading off to an orienteering event at the coast and myself onwards for more zones. 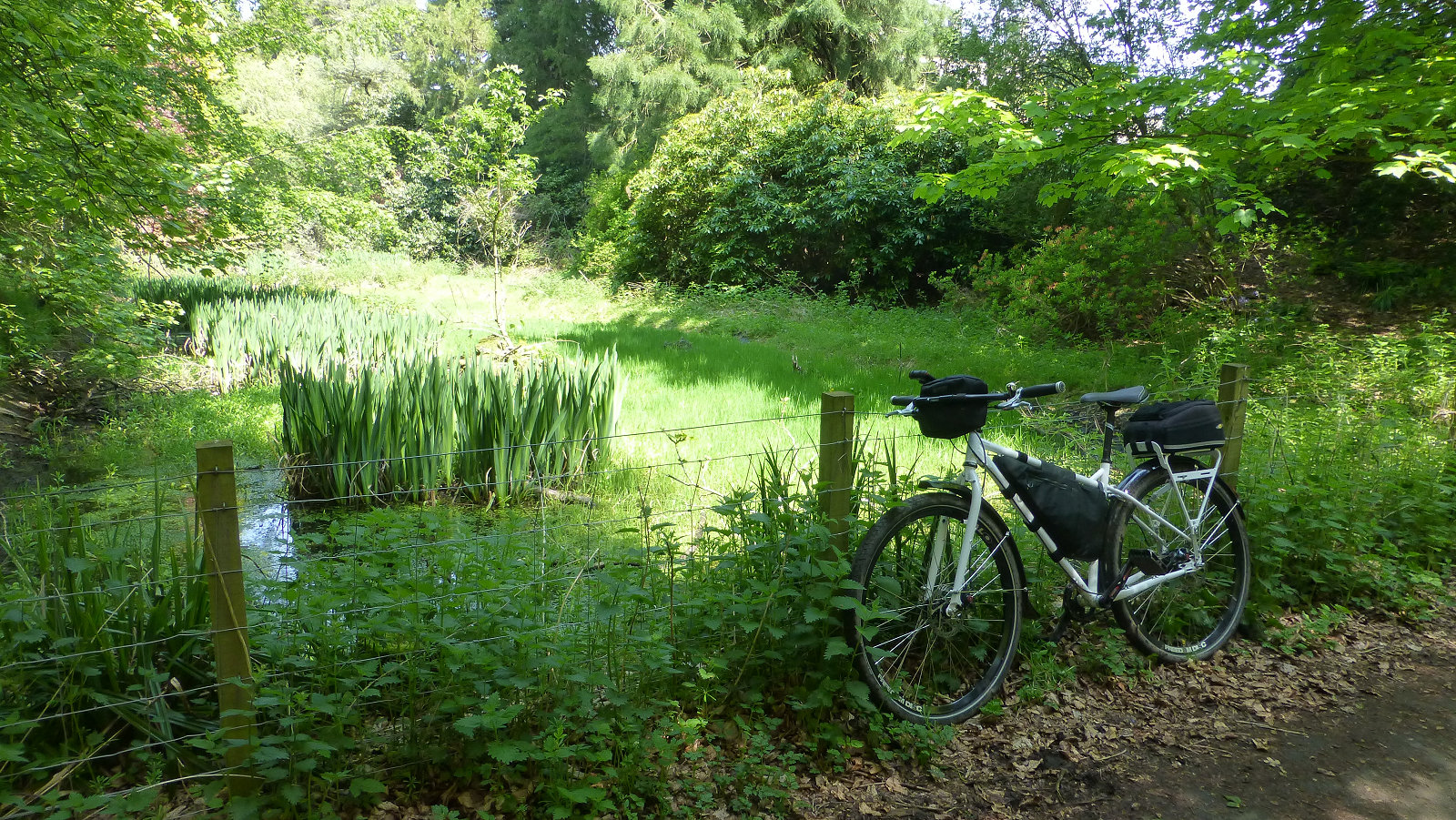 Managed to grab another six zones on the way down to the river where I re-joined the cycle way for home. Another turfer, Artful, had been his way earlier and had taken a few of the zones I’d taken earlier myself, so reclaimed a few for some additional points. I’ve added about 20 uniques to the total, leaving another 40 or so still to take on my next visit. Not a very effective tally for 5 hours of effort, though I did take or revisit another 30 zones, but still an enjoyable day out and that is all that matters.