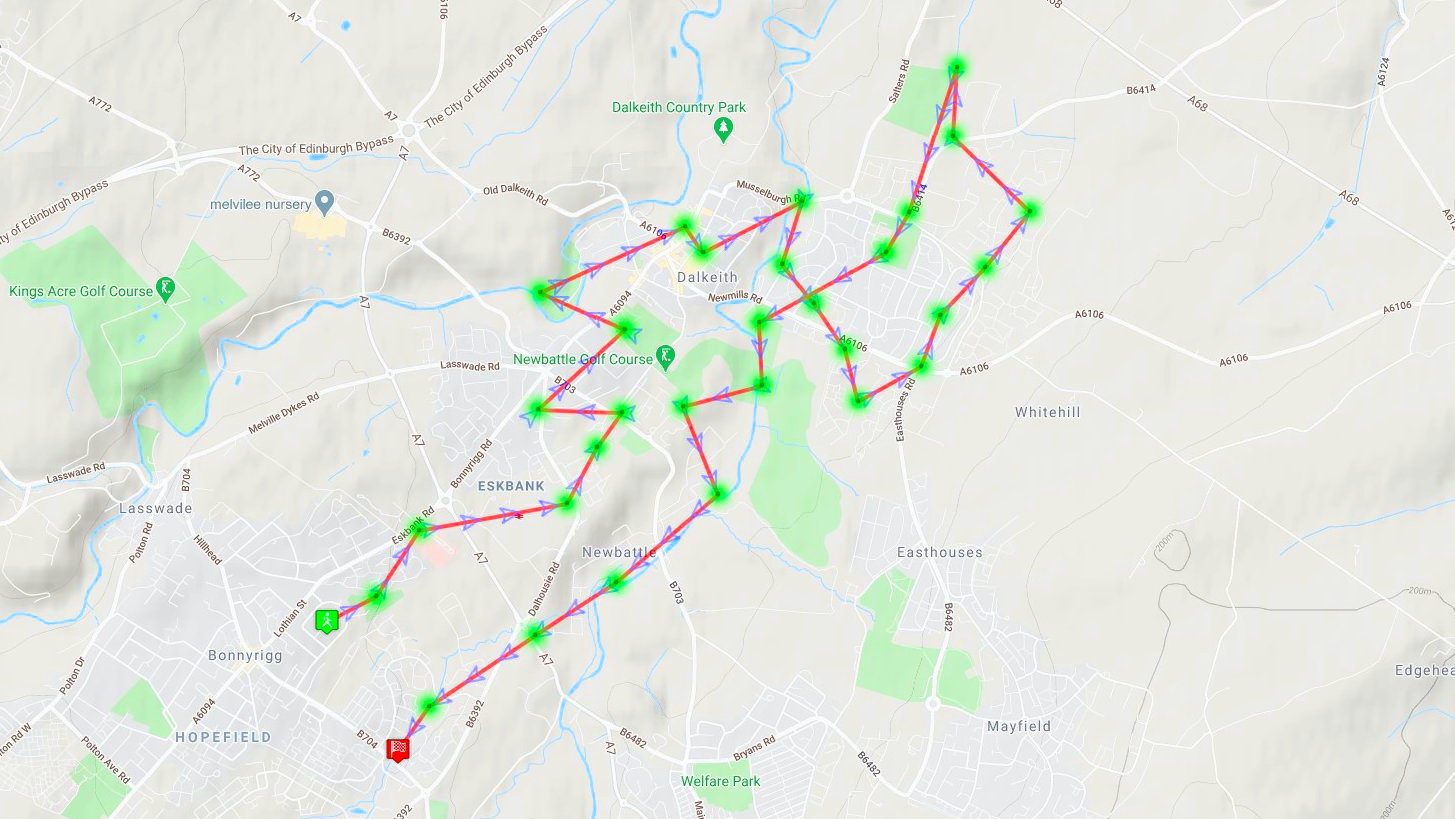 Heading out on the Ogre this morning at 4:00 am, the air was still and everything quiet and serene, everything apart from two male blackbirds having a barney over territory, or possibly females, as is the way, and as the nesting season begins. My plan this morning was to take a few zones in Eskbank and Dalkeith, not only to add a few points for my own round but also for the team challenge.

First take of the morning was NotFencedIn, reached along a recently discover footpath from Waverly Park, one I’d not noticed before despite all the words of advice I’ve posted here on keeping your eyes open for such like. Just watch the steps if coming in the other direction, could be easy to miss at night and you don’t want any impromptu flying lessons. Next, back the same way to take WaverleyPark, in the park of the same name. Then next on the morning round was Slytherin, at the community hospital, where a mob of rabbits on the grass were taking about the merits of Watership Down. I kid you not, Fiver told me himself. Also delighted to see a rather skinny fox, carrying some prey in its jaws, though not sure what. Possibly a discarded burger from the McDonalds across the road. Hope it’s alright afterwards? I shall name him McDonald from now on.

A very dark Eskbank railway station brought me to CollegeZone, then along to BikeSlooowly at the Cop Shop, which I always think looks rather like a forbidding fortress, floodlights and all, and a good movie setting for Assault on Newbattle Road, if any film producers are watching. A fast downhill gave me Beatles, followed by Strawberries for afters and then WhichKing in Kings Park. I’ve never been able to get a good photograph here as its only meters away from a children’s play park and not a good idea to start pointing your camera at youngsters. Perhaps now that the mornings are getting lighter, I’ll get one soon.

Next an internal debate if I could be bothered to drop all the way down to Ironmills Park to take a single zone, WeirHere, then slog back up the hill to Dalkieth town centre. And of course, I did just that. Opposite the Ford garage there was man standing in the middle of the road, swaying slightly, the way drunks do. I was heading the other direction and did not stop. On the one hand, perhaps I should have checked he was all right. On the other, you never know just what or who you are going to encounter.

Managed to take HolyBuccleuch from the pavement this time, without having to enter the churchyard. Normally, I can never catch the zone but this time was successful. I’d seen another turfer doing the same so thought it worth a try. Next across the road for SayAhhh, then along backstreets and down to the South Esk for TheGuitar and JamesTheLean. A few people were about, even at this early hour. One young lad in a hoodie looking suspicious, another with casual clothing, rucksack and ear buds, possibly a shop worker, and an elderly lady surrounded by a cloud of smoke while puffing away on a coffin nail, heading I know not where or for what.

MinersZone was next, then Lauder and Kippielaw. I then had a choice of heading east and looping back round to Dalkieth and taking more zones, or head south towards Mayfield and take the remaining neutral zones on the high ground. My legs said don’t even think about it, pal! So, east it was. I made a mental note to see if there’s a shortcut from here to Mayfield rather than follow the often busy road. A task for another day, in the daylight. This is Mayfield after all, such a happy, carefree, friendly place to visit. Strange that old maps of the area note, “there be dragons here”.

Too busy listening to the birds singing, saw me miss WhitehillDr, and had to drop back again for the zone. Then along to ClarindaZone, with its usual scattering of broken bottles, discarded drug wraps and assorted heaps of dog poo. Stay clear of the the grass. Not one of my favourite zones to visit. The scenery begins to improve at Langside, and zone Medway is proper posh in comparison. In the past, I’ve approached Medway from Dalkeith High, slogging uphill, but this way is better, an easier climb and an enjoyable fast downhill to take DalkeithHigh and the most easterly zone of the session, ExitDalkeith. Spotted a tawny owl sitting on the railings at the culvert. Rabbits all over the place as well. They were taking about The Curse of the Were-Rabbit. Honestly, they were.

More people around now, joggers, dog walkers and more traffic on the road. ThriftShop was next, with CowdenPark falling soon after. Again, more broken glass and mountains of dog poo. Some people just don’t care! Could smell toast in the air as I cycled along to the Newbattle Abbey area, no doubt someone’s breakfast. It’s interesting just what you can smell early in the morning when the air is still. Some flowering scrubs can be quite intoxicating and you can sometimes smell the passing of a fox if you stop where they crossed a path. Smelly things foxes. Cigarette smoke can tell you someone passed recently or is standing somewhere nearby, watching you from the shadows, staring at you with envious eyes, slowly and surly plotting their plans to get you.

There was a hint of smells at zone Peppermint, not of peppermint, but of wild garlic from the woodland to the north. My zone taking now took me through Newbattle Abbey, first taking SouthEsk at the bridge, the track surface now quite smooth having recently been graded and the pot holes are now gone. A tawny owl was calling from the golf course. Time was now approaching 6:00 am and I needed to get home as I’m working today. So, BattleForrest, BattleAbbey, AncientBattle and StoneGate were all taken in quick order, with a final two on the doorstep to round off the morning, Pittendriech and lastly, Brixwold.