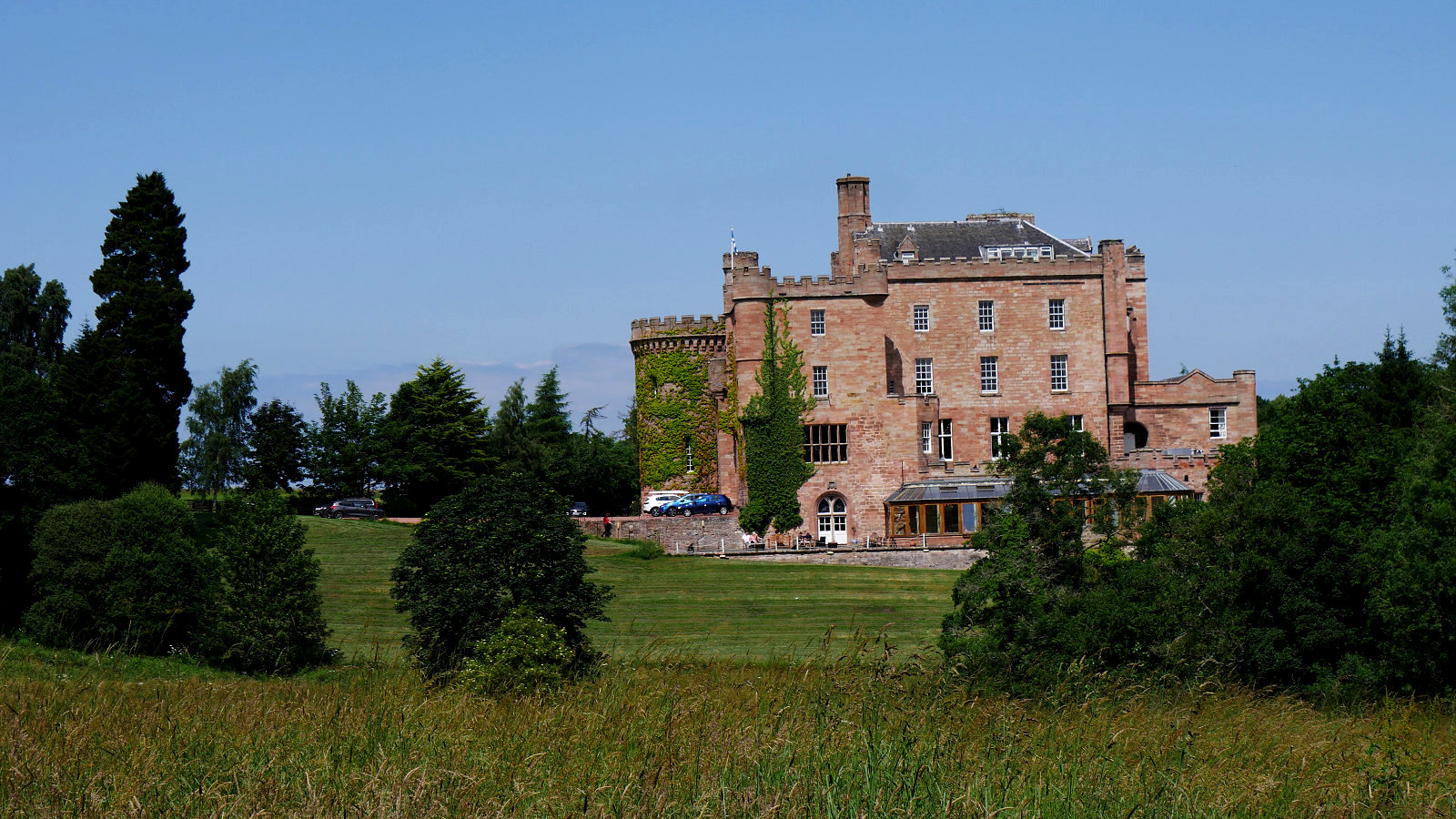 My lower back has been a real pain these past few days. Probably due to overdoing things while turfing down in Galashiels and Tweedbank on the Swifty kick scooter. There’s hundreds of steps in the Langlee area and the steps from the bus depot up through the wood to Mossilee is probable where I did the damage, although I cannot actually recall doing anything at the time. It means no cycling or kick scooting for a while and walking vary far is out of the question as well.

However, from previous experience of my dodgy back, keeping gently active and moving about, at least within reason, is better than sitting about and when I spotted a small tortoiseshell butterfly in the garden, I grabbed the camera and tried to get a few photographs. Of course, while I was able to get some images, the butterfly was not playing ball. Having been sitting with wings spread wide in the sunshine, now decided to close its wings as soon as the camera appeared. Then it buggered off into the garden next door. Very frustrating. 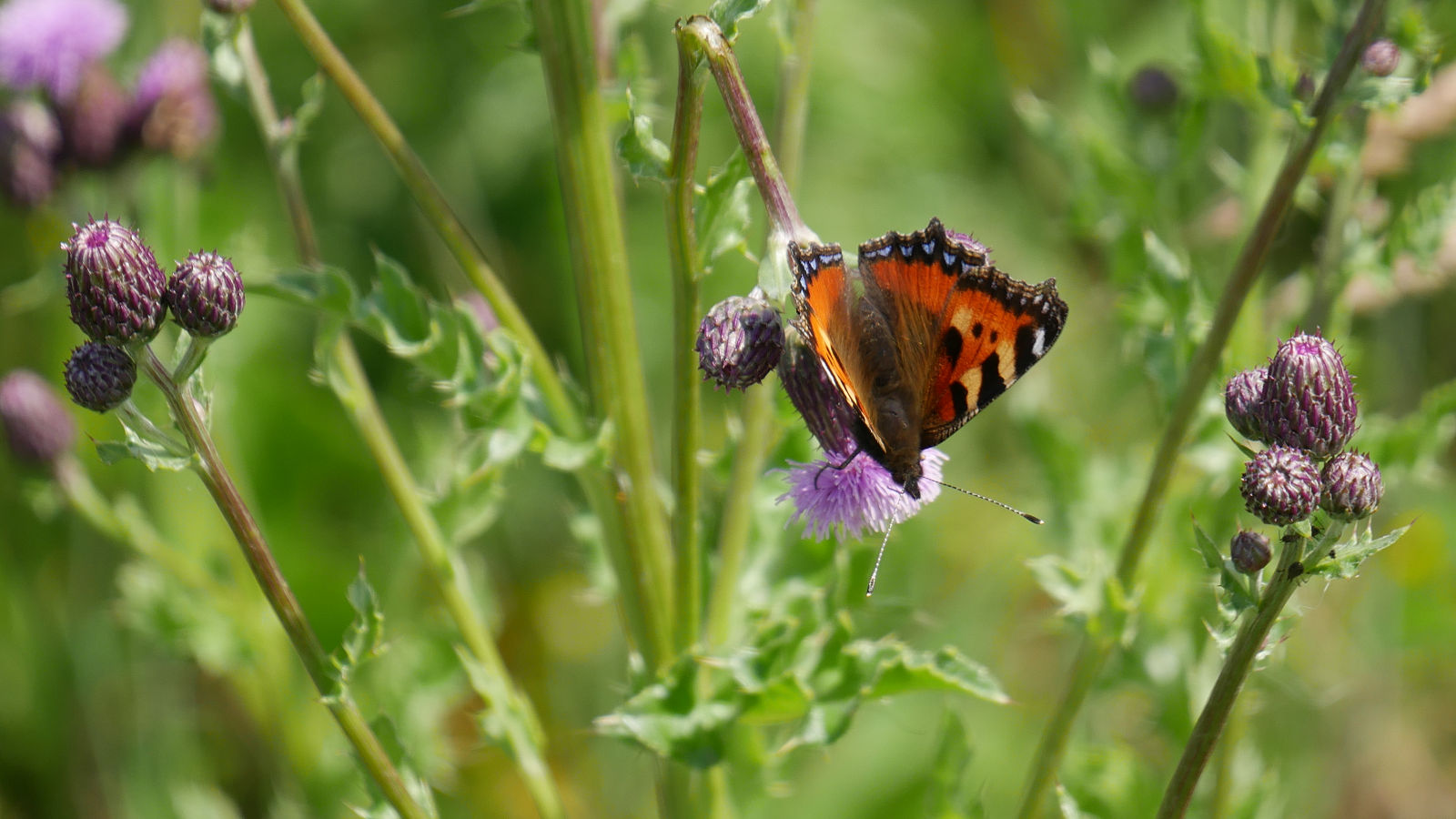 Now interested in the idea of photographing butterflies, I decided on a short walk down to the River North Esk. I knew there would be butterflies along the route and there was also a couple of turf zones, ByEskWeir and GroveFarm, still sitting at neutral since the last round reset, so thought I might as well take them while passing. The camera I was using was my “big” camera, a Panasonic Lumix G7 with a 45-150 mm zoom lens (90-300mm equivalent in 35mm terms).

Spotted my first butterfly not far from the front door, along the footpath that leads down to the Pittendreich burn. Either side of the path is thick with young tree and scrubs and I spotted a small speckled brown butterfly, later identified as a speckled wood. Some careful stalking got me within a couple of meters but it was perched above me on some leaves and all I could see was the underside of the its folded wings. Took a few snaps but nothing very useful. 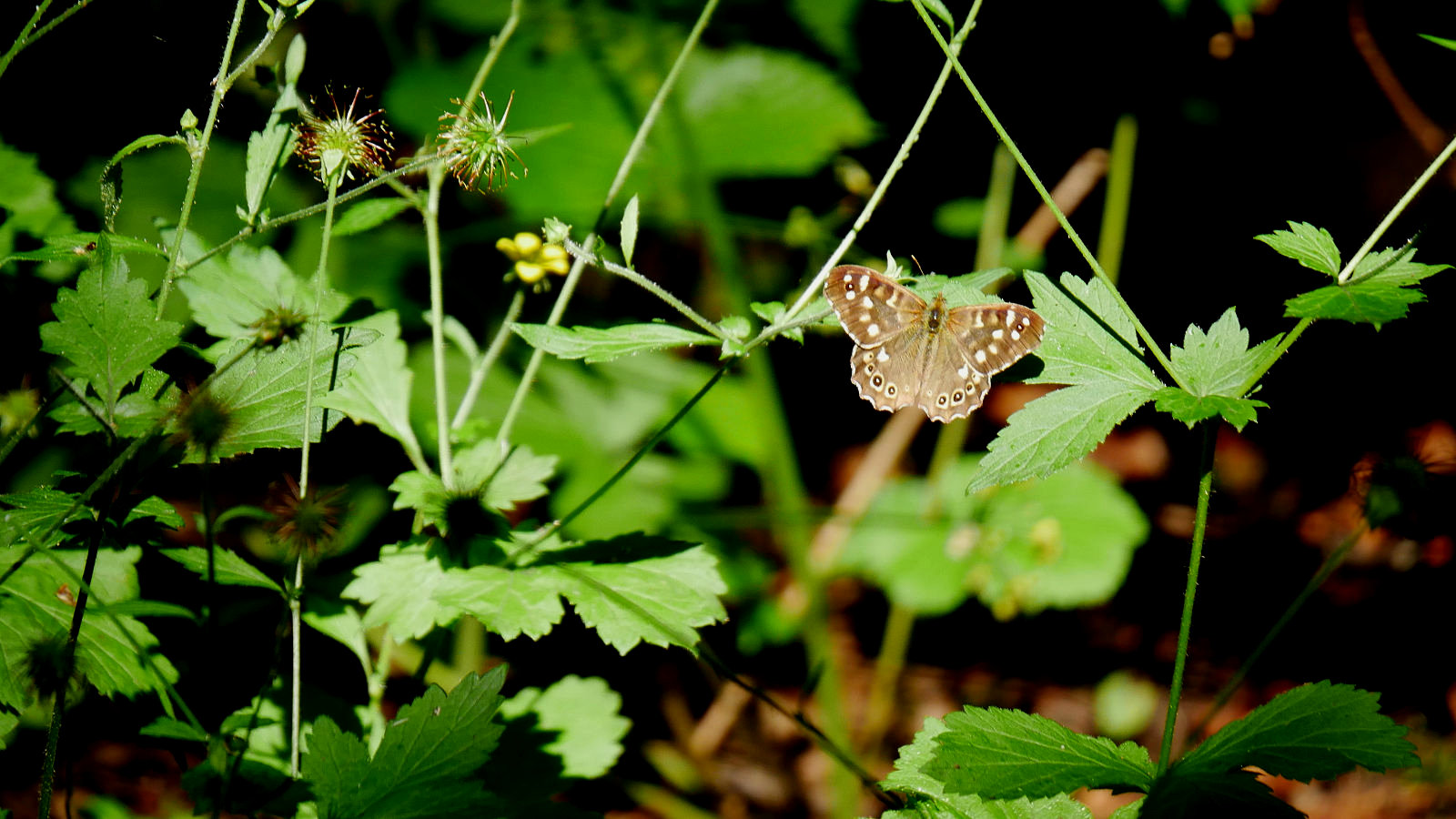 My next potential butterfly hunting location was a field across the often perilous B6392 Bonnyrigg distributor road. The area has been fallow for a few years now and has planning granted for some 360 houses. However, at the moment the field is a great habitat for butterflies, and also for birdwatching, especially skylark, meadow pipit, goldfinch, kestrel and buzzard. Meadow brown butterflies were all over the place but very frustrating to photograph as they refused to land anywhere other than at the bottom of clumps of deep grass, an almost impossible location to take a good photograph.

The lower area of the field was slightly wetter and produced a good number of small butterflies with copper-coloured wings. But by-heck were they difficult to follow. Even when they did land, they folded their wings and were almost invisible. Very frustrating. They were also incredibly fast. Lose sight of them for an instant and they were gone. I’m pretty sure they don’t actually fly from A to B and would bet a chunky Kit-Kat that they jump through butterfly hyperspace rather than wasting energy flying. 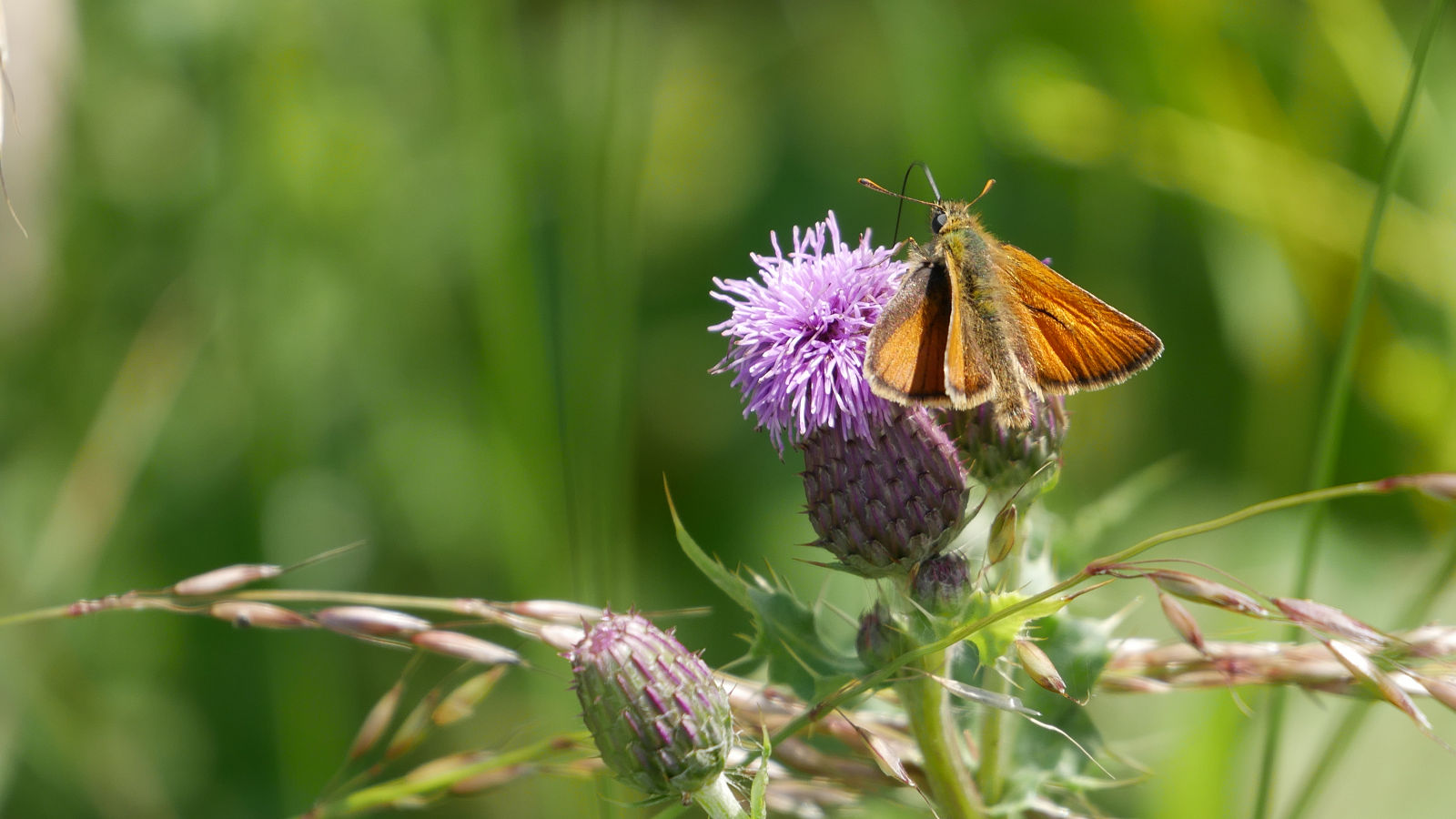 I gave up chasing them and studied their flight patterns for a few minutes, noticing they were congregating around a damp patch of mud. Sitting down and keeping my movements to a minimum, they were soon landing less than a meter away. Eventually, I managed to get some photographs. Nothing very good but enough to identify them as small skippers.

I now joined the footpath beside Deaflawhill cottage and followed the River South Esk upstream, taking turf zones ByEskWeir and GroveFarm, as I passed. The vegetation along the access road to the farm gave me a red admiral butterfly and a few small tortoiseshells as well. Then I dropped down towards Dalhousie Castle hotel, heading for another zone called WitchesHouse. I’d taken this zone a few days ago and had noticed some small moths/butterflies flying around. I later identified them as chimney sweepers, a day-flying moth and wanted to try and photograph them for the turf blog page. 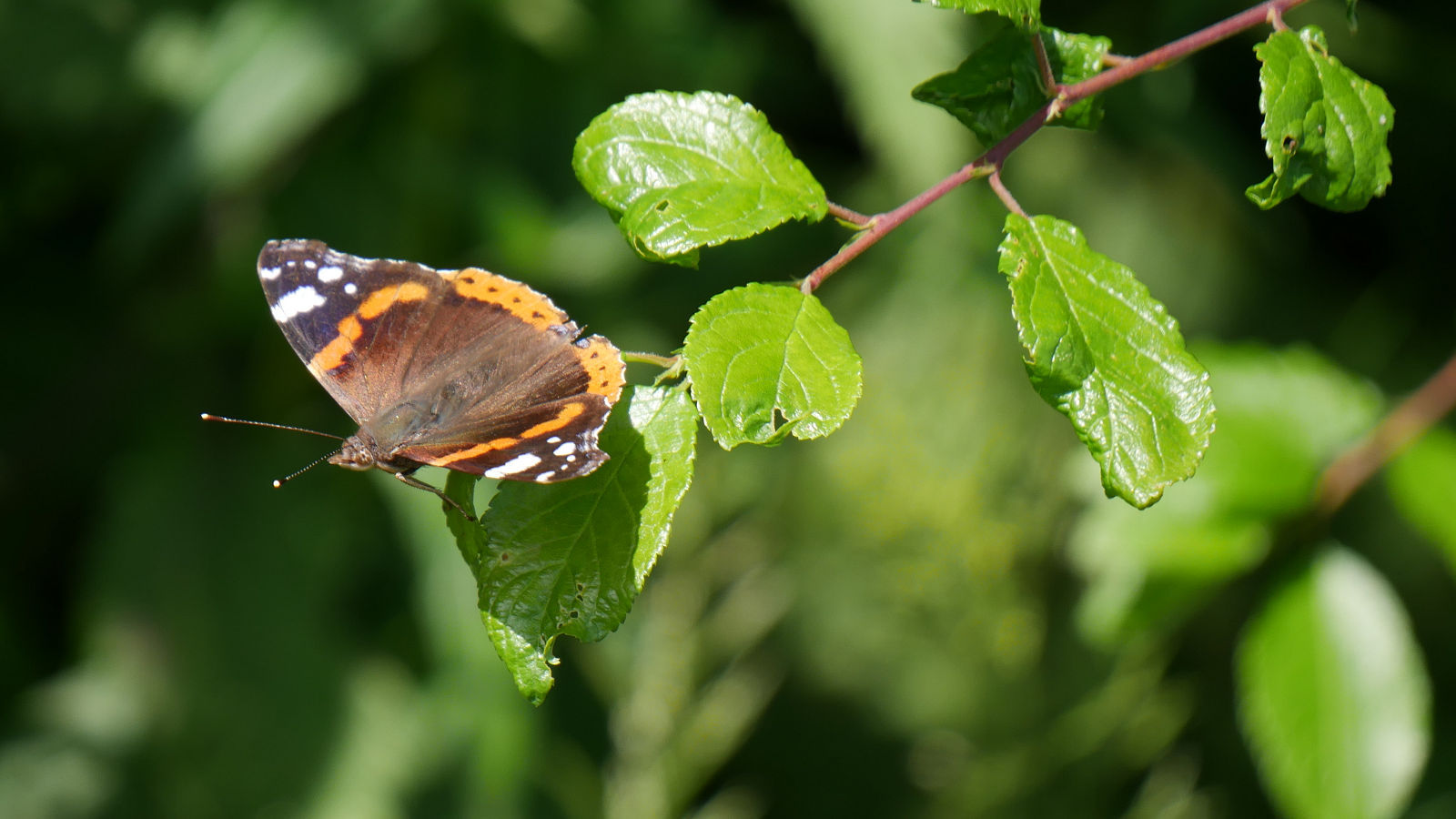 However, that was not to be as I only spotted one or two and was unable to photograph them. The weather today was very hot and sunny, whereas on my previous trip is was overcast and damp, possibly the reason so few of the chimney sweepers were flying today. But all was not lost as there was plenty of the small skippers about and they were less camera-shy than their cousins up in the field offering better opportunities for a photo.

I now turned for home, following the woodland path through the Dean Burn Wood, and also very happy to get some shade from the hot sun. Managed to get some better images of a speckled wood, one posed perfectly on a leaf for me. They seem to be a butterfly that prefers open woodland glades with dappled sunlight. 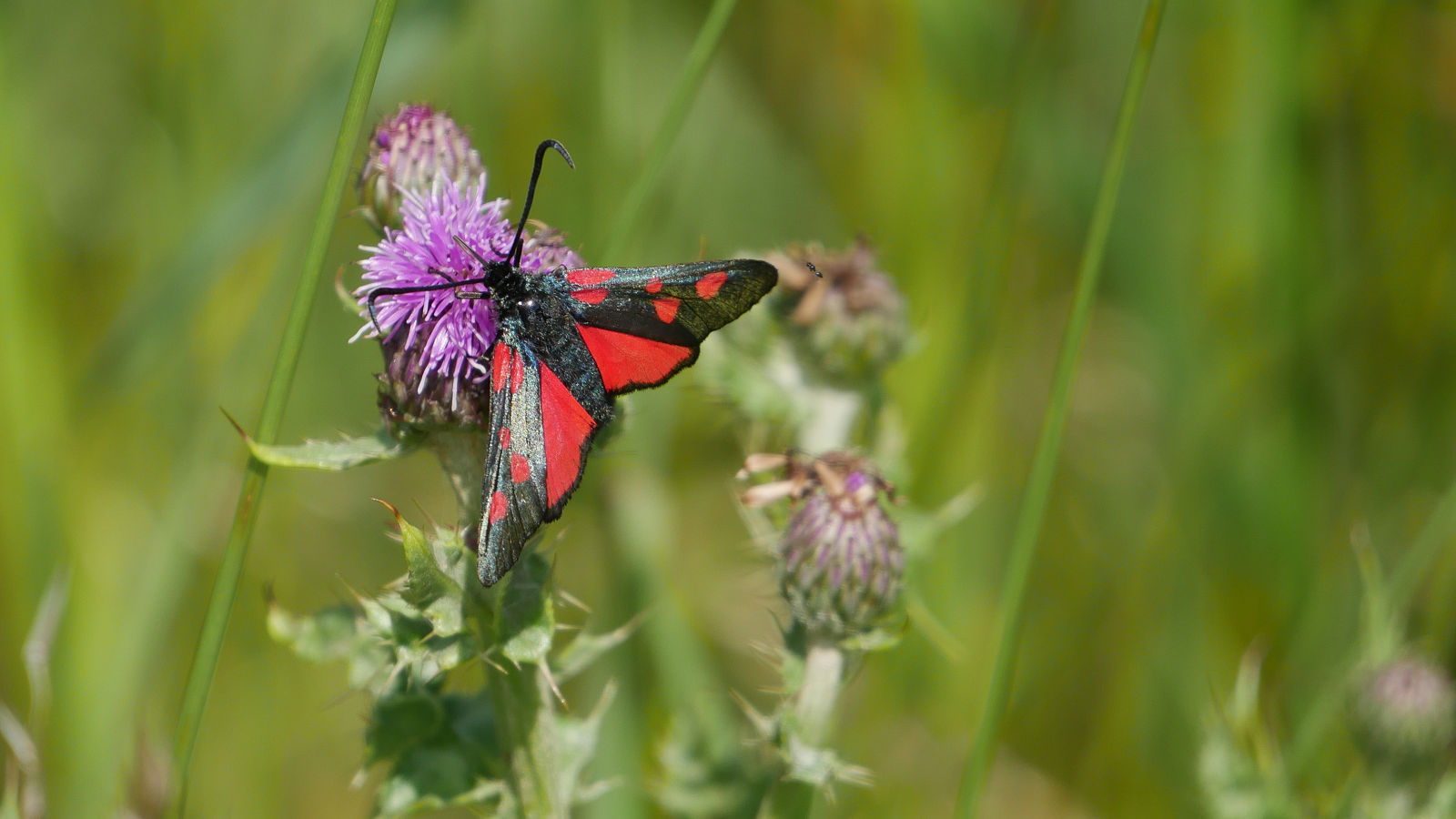 Walking back through Cockpen church, I managed a revisit of the zone for a few points – same at WitchesHouse by-the-way – and was thinking about a day-flying moth I’d seen many times along the East Lothian coast, the six-spot burnet moth. Then, strange as it might seem, there was dozens of them in the long vegetation just off the Cockpen roundabout. They were most obliging, easy to photograph and will sometimes happily sit on your hand in cooler weather. A nice end to my turfing-come-butterfly hunting trip.