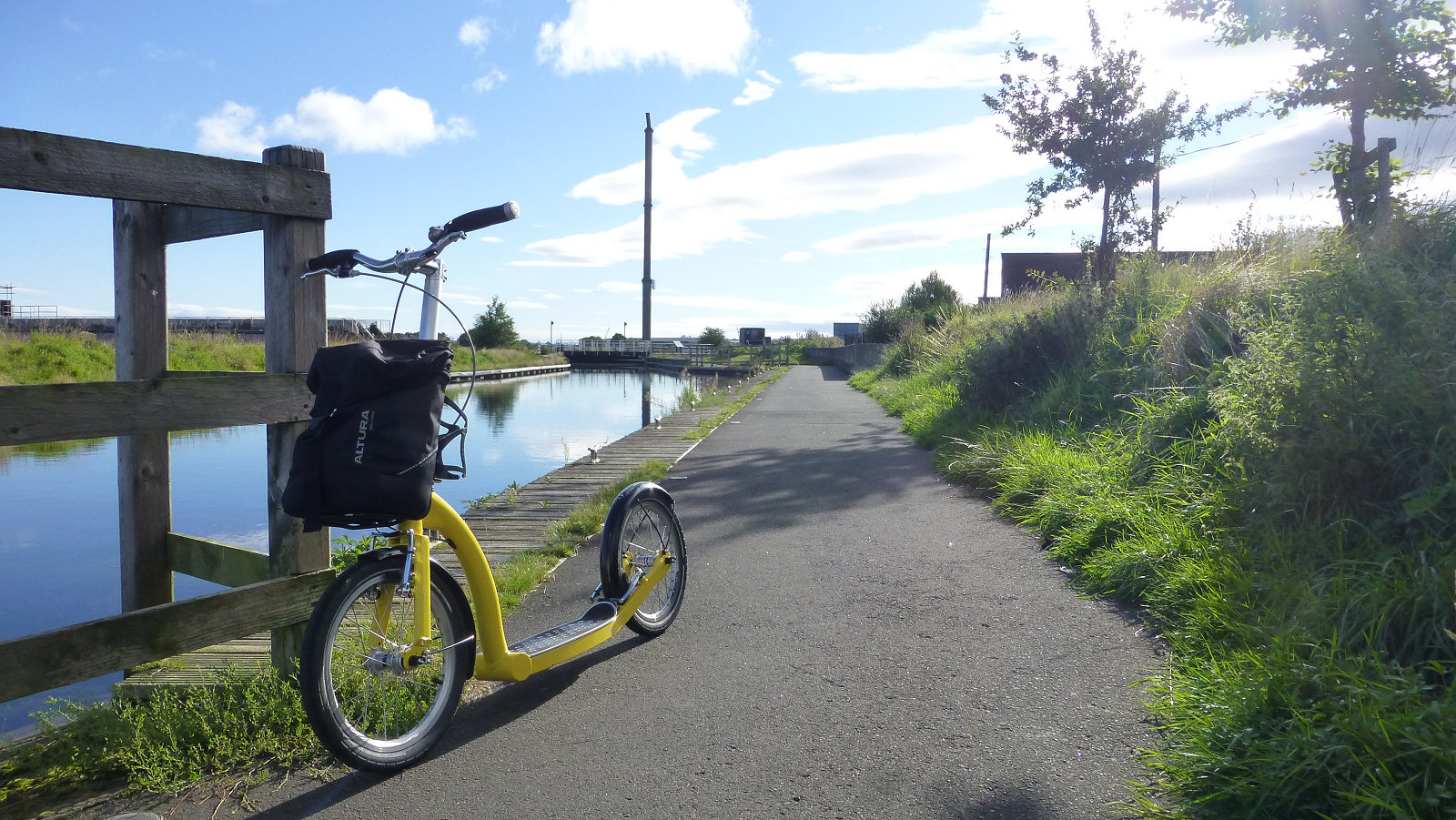 Having recently kick scooted my way along a short 4-mile stretch of the Forth and Clyde Canal, between Grangemouth and Falkirk, I want to share a few words about kick scooting on this type of route, canal paths.

The first thing I want to say is that canal paths in built-up areas can often be busy, sometimes very busy, particularly in cities. Other users such as runners, cyclists, dog walkers and just people out for a stroll all frequent these paths and can present a hazard to the kick scooter rider. Dog are an obvious one to watch out for and a good rule is to always use your bell to alert them to your approach, the owner not the dog, as the dog will often detect you long before the owner does. Dogs are often unpredictable, so expect anything.

Cyclists tend not to get in your way as they are more likely to be catching up with you from behind and not all cyclists use their bell. Sometimes they just speed past without any warning so keep an eye open for what is going on behind you. On the subject of bells, I’ve found that some canal path users are oblivious to your bell ringing, sometimes even when a few meters behind them.

Often elderly people will not hear you and a shout will often work. A common issue is people wearing earphones while listening to music. Again shouting “bike” usually does the trick and gives them a fright as well, which serves them right for shutting themselves off from what’s going on around them. Next item I’ve discovered on my first canal path scoot was something of a surprise. I had always assumed that canals path was flat but that’s not always the case. It’s obvious when you think about it, canal locks are designed to raise canal water traffic either up or down the canal, gaining or losing height.

Another item I want to note is that the condition of the canal path surface can vary widely. Great when it’s smooth fast tarmac, a pain when it granite cobbles or broken gravel. And then there’s the puddles, often accompanied by mud and ruts, which can catch you unawares. Detours for roads and rail crossing may also be frequent with steps often being needed. A final point to note is that canal paths can be narrow in places, particularly when passing under bridges or through tunnels. Having said all that I don’t want to put you off kick scooting along canal paths, there are many miles of good quality canal path available for you to enjoy.