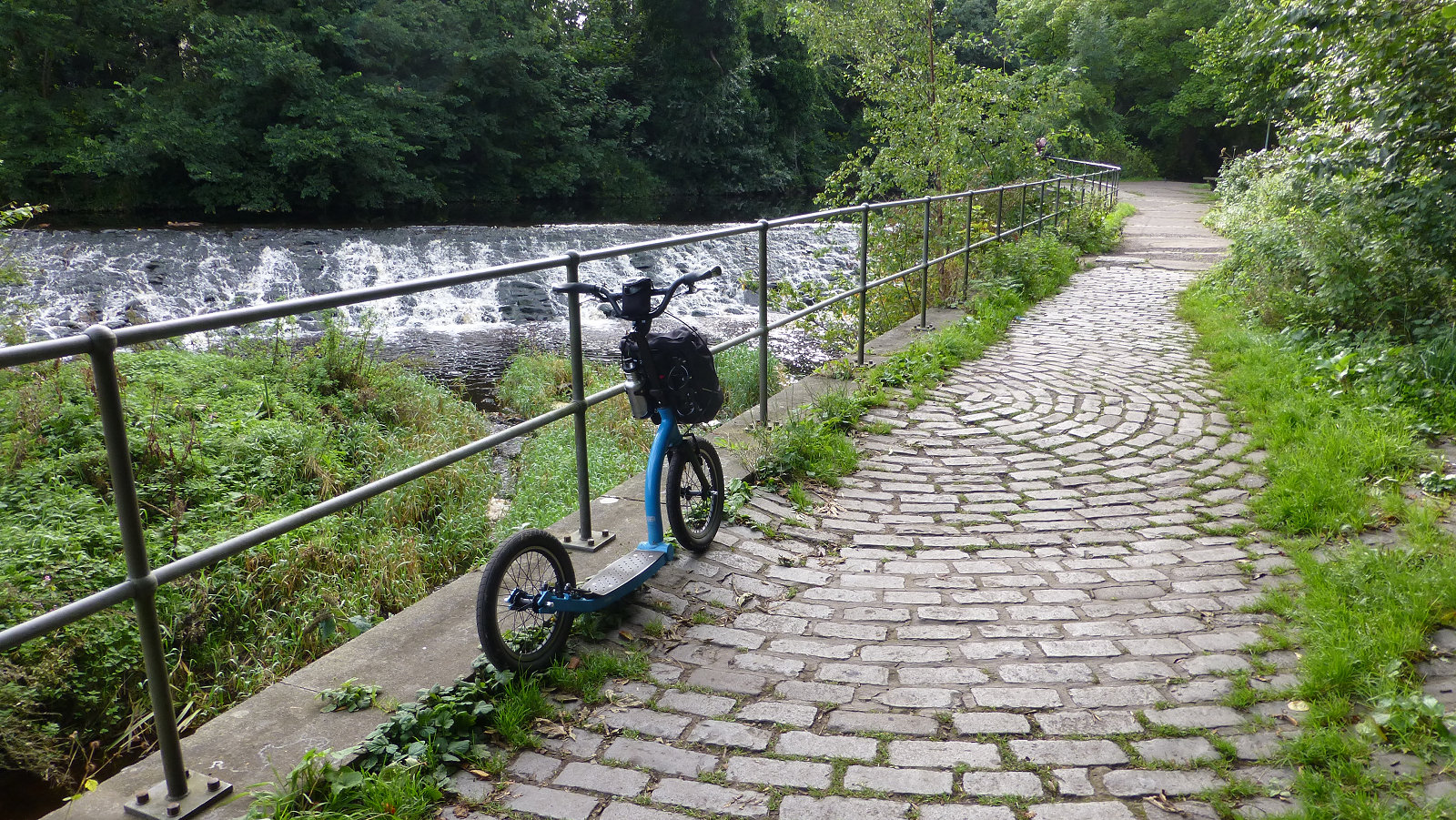 A rather chilly morning meant for a delayed start to today’s wee adventure, a 7.5-mile scoot upstream along the Water of Leith Walkway, a popular route through the centre of Edinburgh, the Scottish capital.

My starting point was near the docks at Port of Leith, were I was able to find a parking spaces, despite all the disruption caused by the latest tram works. A few minutes’ easy scoot along quiet streets saw me crossing the tidal part of the Water of Leith and looking for signs indicating where the walkway would start. And signs, or the lack there of, due to route closures and diversions, would feature greatly in this morning’s scoot. 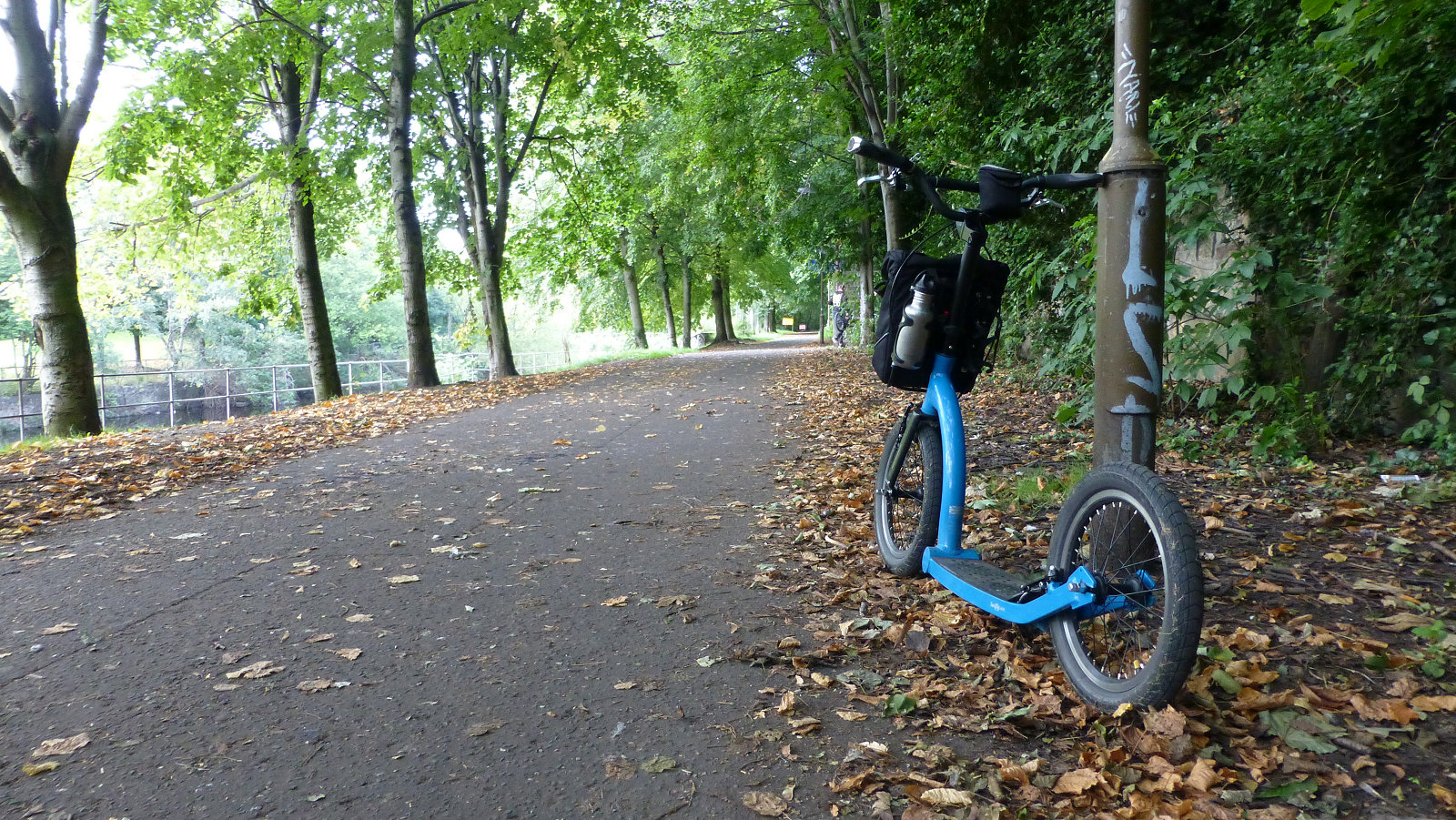 Soon after leaving the now trendy niche shop and cafe district at Leith, the route soon turns leafier, as the walkway lead me through wooded areas and parks. Unfortunately, I don’t know the area well enough to describe exactly where I was at any given time but most of the route was easy enough to follow, just keep the Water of Leith in sight and you should be okay.

On a couple of occasions route closures due to landslides and unsafe bridges led to detours, some very poorly signposted, with either no signs at all or poorly placed. More than once I had to ask for directions or followed what seemed the likely route only to have to backtrack. Most frustrating. 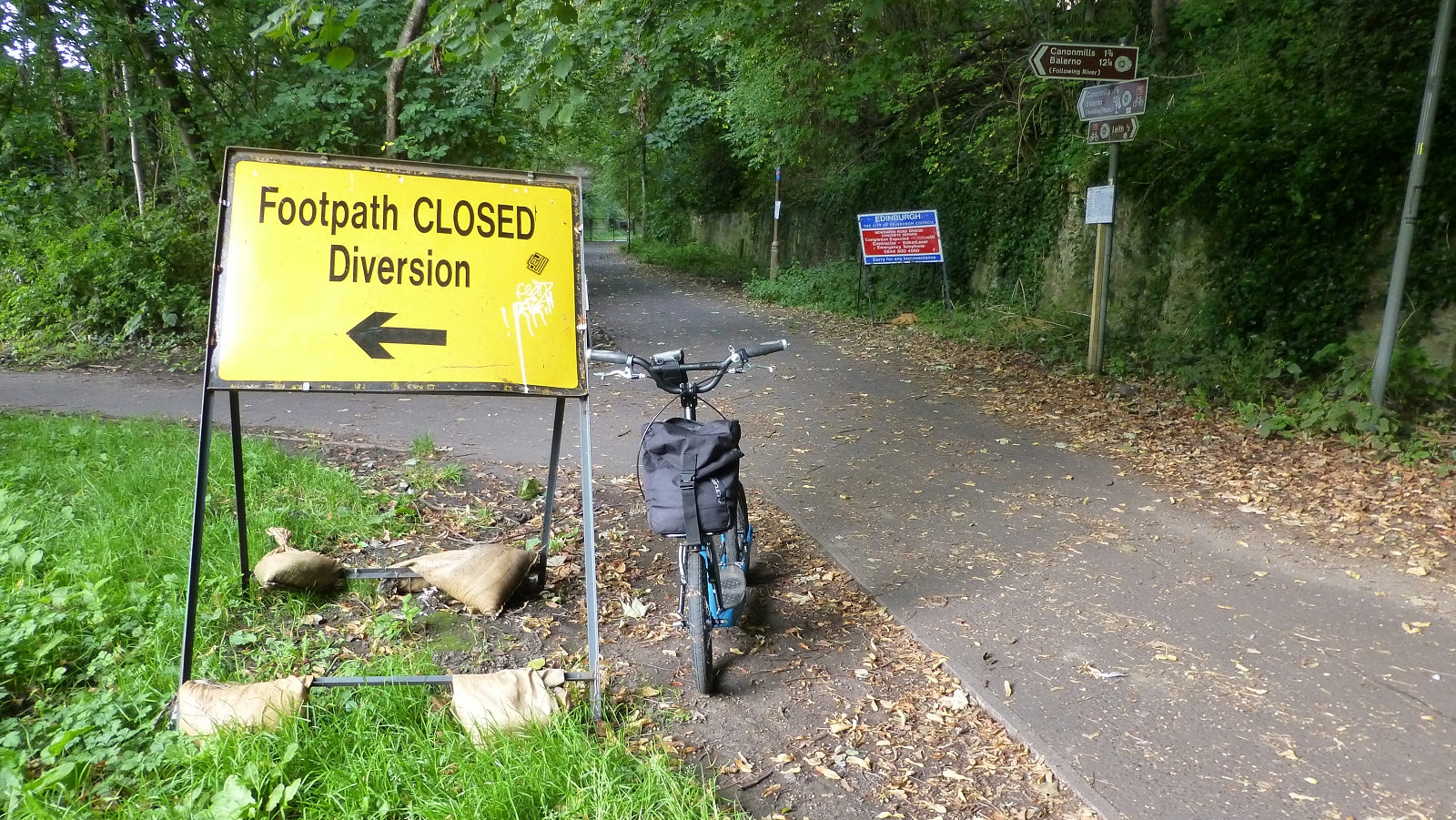 On many of my scoots I tend to rely on my sense of direction, always aware of which cardinal direction I’m heading but the Water of Leith while generally flowing east-west also meanders and often runs north or south, which I find most off putting and it sometimes felt I was going the wrong way. However, as long as I was heading upstream I was heading in the correct direction.

Poor signage, or perhaps just myself missing a sign, had me scooting a merry chase at Dean Village, eventually finding myself at the Scottish National Gallery of Modern Art, a bit off route. However, while the earlier stretches along the river were new to me, I was well acquainted from this point onwards, having walked here on many occasions while working nearby. 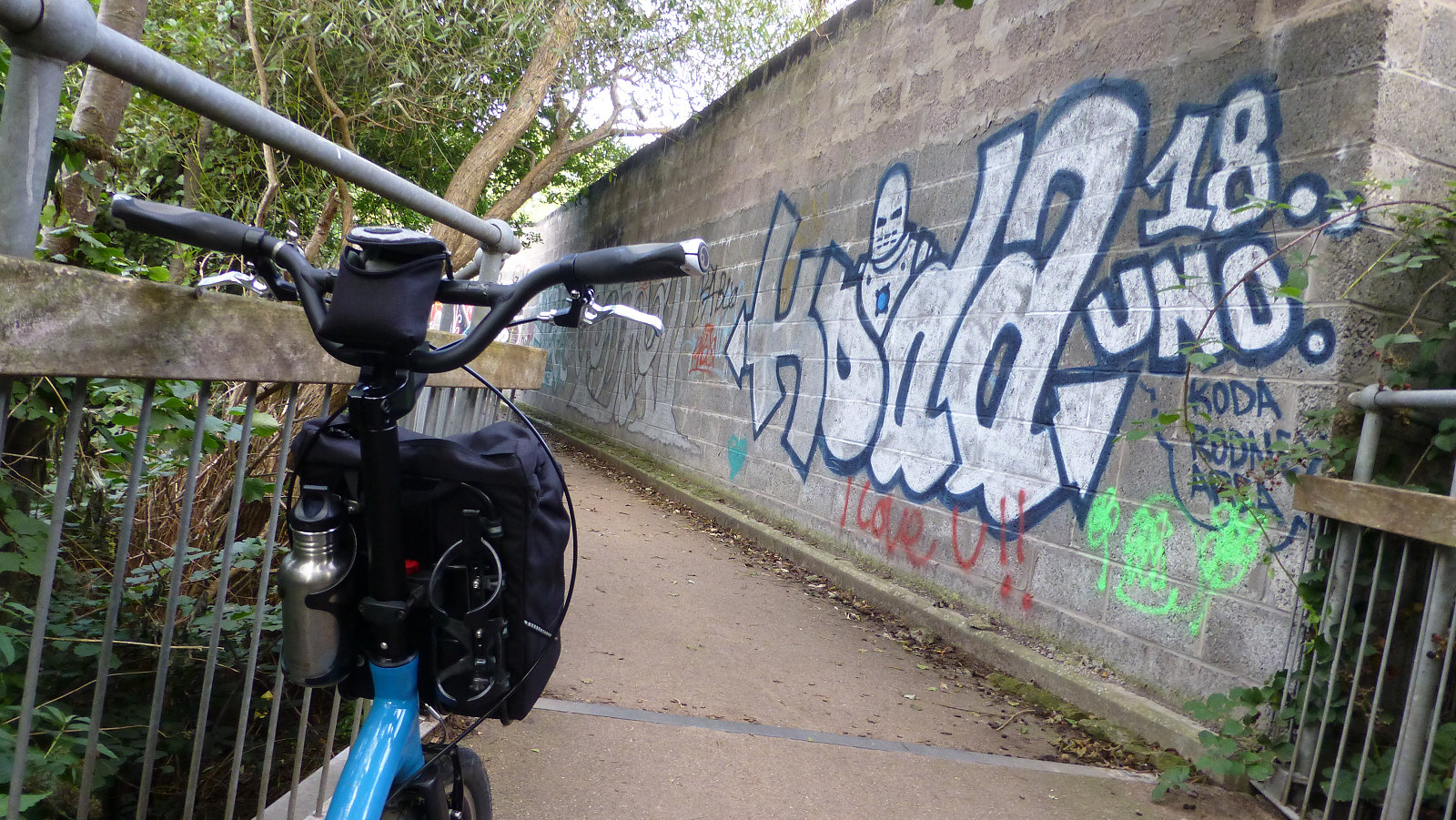 Of course, being in the centre of a capital city, the Water of Leith walkway was very busy with runners, walkers, dog walkers, tourists, cyclists and just about everyone else. My little handlebar mounted bell earned it’s keep this morning, though some elderly people do not seem to hear it but a shout of “bike” usually does the trick, same with people using earphones.

After Roseburn, some excellent smooth tarmac saw me passing Murrayfield, the well-known rugby ground, After Soughton Public Park, parts of the route were very rough gravel but soon improved as I scooted the final stretch of the day up to the Water of Leith Conservation Trust and Visitor Centre where the coffee shop was just opening for the day. A coffee and slab of cake was most welcome. 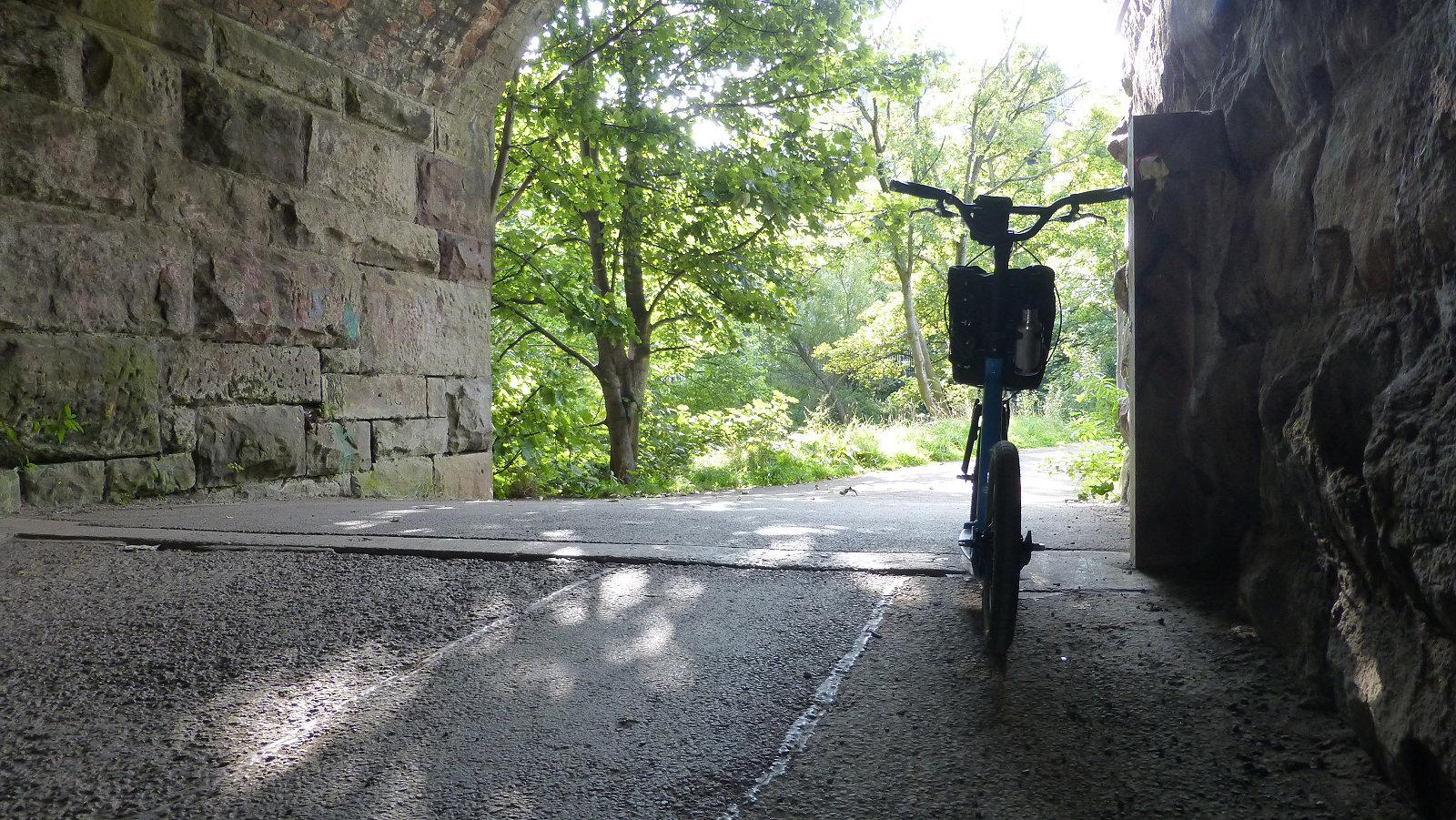 My original plan was to return by way of the city centre but it seemed a shame to leave the pleasant paths along the river for a concrete jungle, so I retraced my route back downstream to Leith, bringing my scoot to around 15 miles. There’s still another 5 miles left to do, the stretch from Staleford to Balerno but that’s on the to-do list for another day.