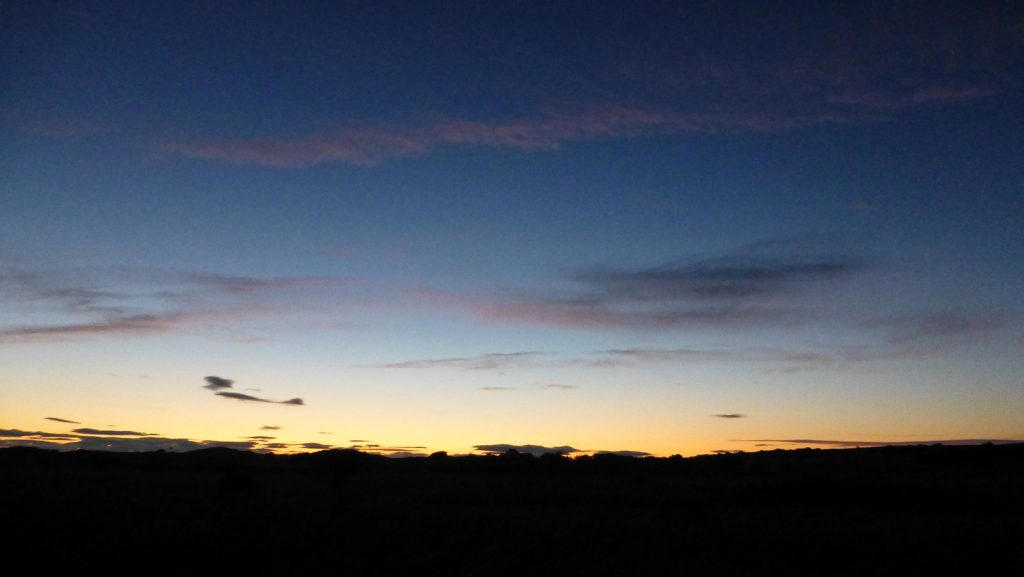 I’m always on the lookout for those interesting occasions when a combination of different factors fall into place just at the right time, providing a great excuse for night-time turfing adventures. Such factors might include a bright full moon, clear starry UFO-spotter-friendly skies, a suitable sunset or sunrise time, a low tide and nice warm weather for shorts and t-shirt. Another might be Nestlé launching a new flavour of Kit-Kat but that doesn’t occur very often, more’s the pity.

Tonight, low tide at Aberlady is around 3.00 am, sunset is around 10.00 pm (pretty much dark by 11.00pm) and moon set is around 1.00pm. No full moon tonight but a 62% moon might offer some light to help see the way. Weather forecast is dry with clear skies, temperatures not falling below 15 Celsius and a nice breeze to keep you cool. Perfecto! So, factors tonight look favourable for taking the Surly Pugsley fat bike on a trip to the seaside and bagging some zones out in Aberlady Bay Naturist Reserve, East Lothian.

But first I need to do a little bicycle preparation for beach riding. First task is to fit my less-chunky tyres. I run a pair of Surly Nate tyres in the winter, great for snow and ice but hard going for beach cycling. I much prefer my less-gnarly tyres, Nate’s little brother Larry, during the summer months. The tyre pressures are adjusted down to 8 psi on the front and 10 psi on the rear. I’ll also need to fit my customised “beach” pedals. With these, I removed the studs and fitted grip tape. This is more comfortable when wearing my thin-sole river sandals and also means I can go barefoot when cycling in the sea and keep my footwear dry.

Another task is cleaning and oiling the chain. Actually, when I say oiling, I actually mean waxing. And no, definitely not the kind of down-below waxing you pay for, and that hurts! Not that I would know, I hasten to add. I’m using a wax-based chain lube that does a good job of not collecting as much wet sand as a traditionally oiled chain does. It worked well on my previous visit so I’m keeping with it. The downside is that you need to lube the chain more frequently, usually before every ride, and let it dry beforehand. And other than making sure my LED light batteries are fully charged, Pugsley will be ready to go. 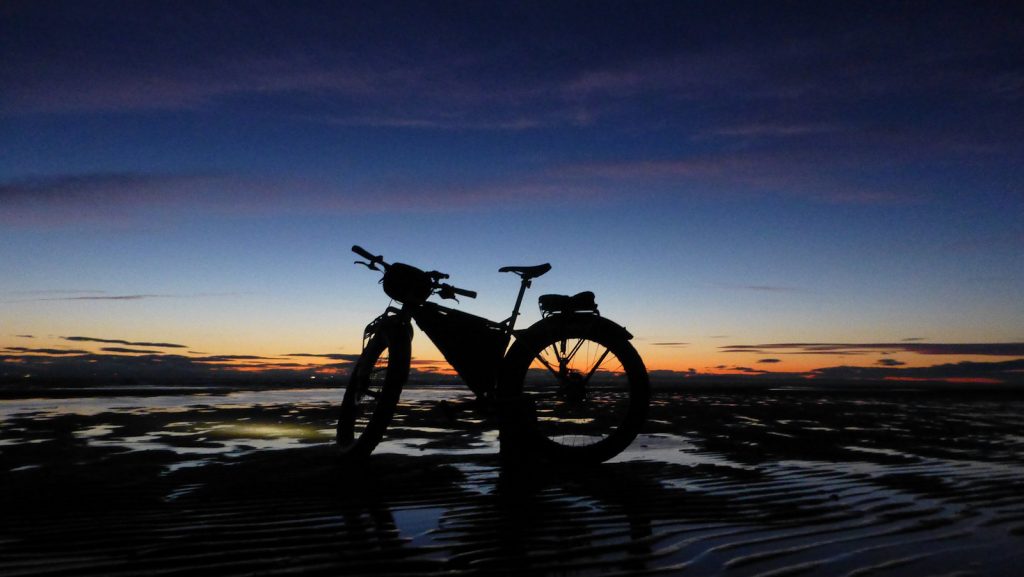 Back in August 2021 on Turf Blog 25-08-21, I mentioned that Aberlady Bay has an un-official naturist area and with that in mind, I had an interesting idea for a turf adventure. And I quote.

“That idea was to give clothes-free turfing a try, (at night, of course, when there’s no-one else about to see), and purely in the interests of the advancement of scientific discovery and the turfing lore, to see if turfing while clothes-free, was actually possible, and also write up a blog on the exercise.”

So, that is exactly what I intend to do for my visit this evening. Yes, totally clothes-free turfing on a fat bike. You know, this might actually be a first ever and might start a new turfing trend. I wonder if you could get extra turf points for taking zones while nudus maximus? This could be fun, probably! I bet nobody will believe me anyway. And no, I will not be posting any photographs to prove it.

Approaching Aberlady I had various options for parking; at the reserve parking area, in Aberlady or in Gullane village itself and there’s also quarry corner as well. I opted for Aberlady itself as this would be a good start and finish point should I include a cycle along the coast, perhaps grabbing some zones around Kilspindie. The street lighting also makes it easier to get things ready. 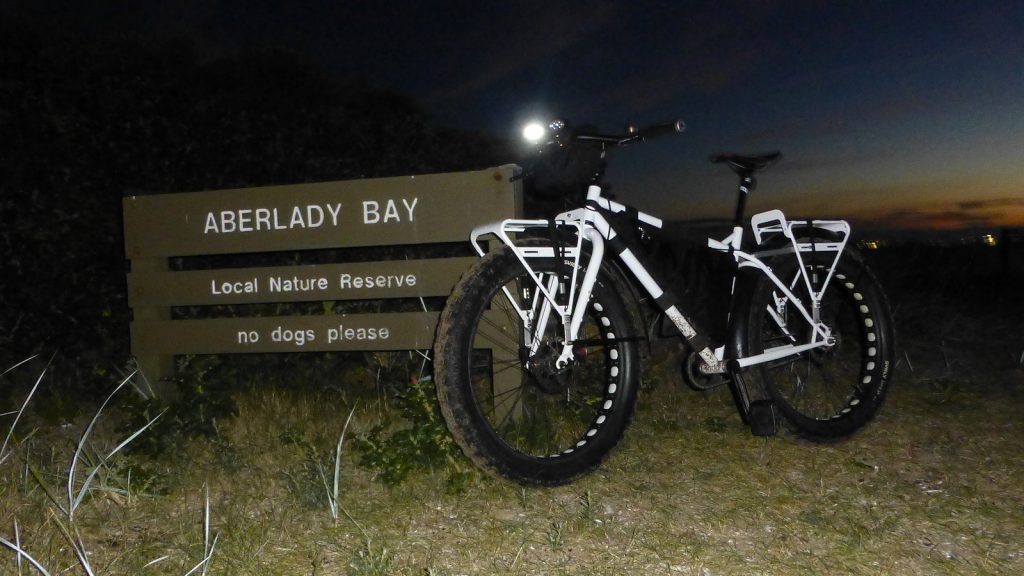 Getting the Pugsley ready is a right carry on. First undo five different attachments to remove the bike from the carrier, next fit the pedals (they foul the car bodywork), install the frame bag and LED bike lights and finally load all my gear onto the bike. Seems to take forever. Wish I had a van! Or even a better bike rack. Ah, now that’s a thought to follow up on.

By 22.54 I was off and taking the first zone of the night, AberladyGreen, a nice and easy start zone. Then I pedalled off along the shared path beside the road to Gullane and North Berwick, crossing the footbridge into Aberlady Bay Naturist Reserve at the small car park, stopping to take zone AberladyBay before crossing. There were four vehicles in the car park, two of them campers with lights on and curtains drawn. Looked like there might still be visitors out in the reserve. Always good to know when cycling at night as not everybody carries lights when walking at night.

It didn’t take long to reach the main dunes just before you reach the coast. But rather than head out across the beach, I veered right along an indistinct path that follows the dunes to my next zone, PillBoxWW2. Then I remembered my plan to try some naturist turfing and stripped off my t-shirt and shorts, stowing them securely on the handlebar bag, within easy reach should I need them in a hurry. Or more likely, a mad panic should I encounter someone. My sandals were bungee-strapped onto the rear rack. Might as well do this properly. This was Aberlady Bay Naturist Reserve after all. I was now in naturist turfer mode. This will be fun!

I thought the chances of encountering anyone along the dune paths at this time of night would be remote but that was soon to proved otherwise. Nearing the zone, I was cresting a slight rise prior to dropping down a steep slope when I head a shout of alarm in front of me, my lights revealing a young couple in the grass and I must say they didn’t have a lot of clothing on. I’m not sure who got more of a fright, them or me, but I suspect that suddenly being bathed in 1000 lumens of intense Hope LED bike lights, it wasn’t me. I gave them a quick sorry and about turned, following another path and left them too it, whatever it might be. I don’t think they were reciting poetry!  More likely playing mummies and daddies. I suspect they would not have noticed my lack of attire in the blinding glare of the bike lights

Zone SandySocks was next on the list. Back along the dune path, Pugsley scattering rabbits all over the place along with a couple of roe deer browsing in the long grass. Now on the open beach, the zone was reached first time, my bearing brought me directly into the zone. No dodgy GPS issues out here! Next, the zones at the wrecks of the two midget submarines. It only took me four minutes to reach the first of the subs, zone SubWreckTwo, however, it was still partially underwater.

I had a quandary; do I wait until the tide drops further or wade out for the take. Of course, as I’m in naturist turfer mode, i.e. totally naked, wade out it was. The water was only knee deep but the waves were lapping up to my thighs, splashing the parts that tend to not like being splashed with cool water. Thankfully, the water wasn’t too cold and the zone was taken without issue. Quite good fun actually and adds a little something to the adventure. Much the same at the other zone, SubWreckOne, but this one was in deeper water. However, wading out I was able to take the zone from quite far away from the actual wreck. 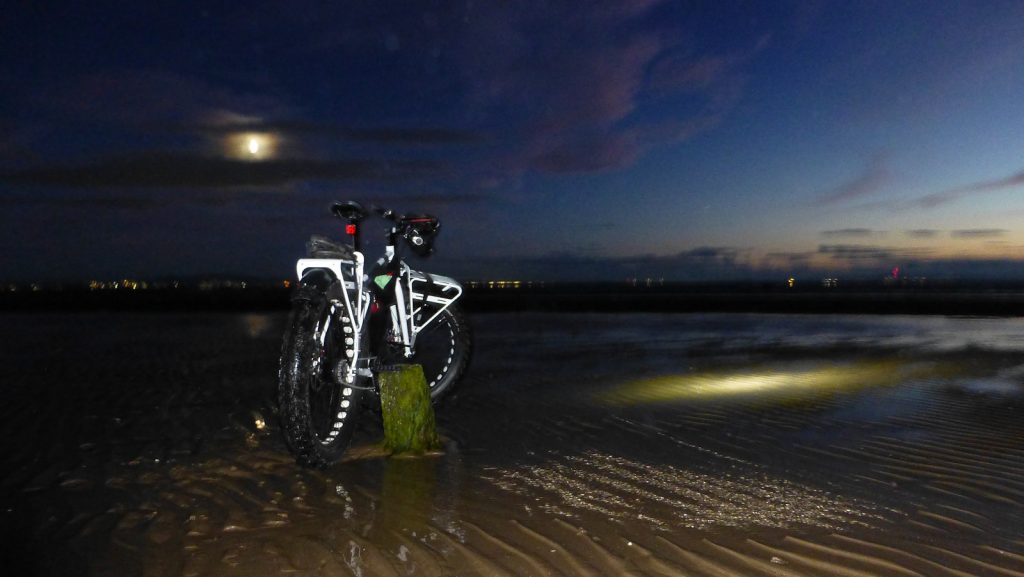 I now had a fantastic ride along the beach to my next zone, TheOldMan, Pugsley fairly hurtling along with the wind to my back and hard-pack sand beneath his fat tyres. It actually felt really good being totally naked. Pugsley said I was totally daft. It’s very liberating and you seem to experience everything much more intimately. Your bare skin noticed every slight change in temperature, every change of wind direction. You seem more in contact with everything when barefoot as well. Most enjoyable and to be recommended. Pugsley said I was daft again.

Zone HummelRocks was next. Now, I should really have put some clothing on again as I would be strictly leaving Aberlady Bay Naturist Reserve but decided not to bother and remained skyclad. I passed a couple of tents in the long grass, revealed by the faint glow from lights within. I don’t think anyone was aware of my passing. The Surly Pugsley fat bike is pretty much silent. Next, one final zone of the night/morning, GullaneHill.

After pushing Pugsley up a steep slope onto the golf course access track, I again wondered if I should get dressed. But I deemed there wouldn’t be anyone about at midnight, certainly no golfers, unless they are out playing using night vision goggles. Of course, there might be people out walking dogs or whatever, but that didn’t seem likely. My clothing stayed where I’d packed it on the Pugsley.

I followed gravel tracks up to the summit of Gullane Hill, taking the zone beside the information cairn. The view was amazing. The lights of Edinburgh sparkling in the distance. I could even see the flashing beacons on the Forth bridges. Zone taken. I opted to drop down across the golf course, keeping to what tracks I could find and the edges of the fairways. I recall thinking I’d need a shower when I got home but got my wish sooner than expected when I sprinkler opened up just as I approached a tee. I was instantly soaked in the full blast of the irrigation spray. Good job I was skyclad or my clothing would have been soaked! It was very refreshing, I must say.

And that was that. Soon I was back onto the path leading back to the car park. Spotted a short-eared owl sitting on the signpost. Very surprised that it didn’t fly away until I was about four meters away, at the point I said, hello Mr Owl. I stayed in turfing naturist mode all the way to the footbridge. I was getting to like this mode of turfing. It was strangely exhilarating, thrilling and quite an interesting experience. I can see myself doing more of this in the future. Just need to work out where to go. I did remember to get dressed before crossing the footbridge back onto the real world. Pugsley said I was daft again and went into a huff.

And the final question might be. Did I really do all this while totally starkers? Or did I really turf those zones without a stitch of clothing? Or perhaps I’m just making things up to spice up the blog a little? Well, I’ll let you decide that for yourself. Always good to leave a little uncertainty. Back again soon.