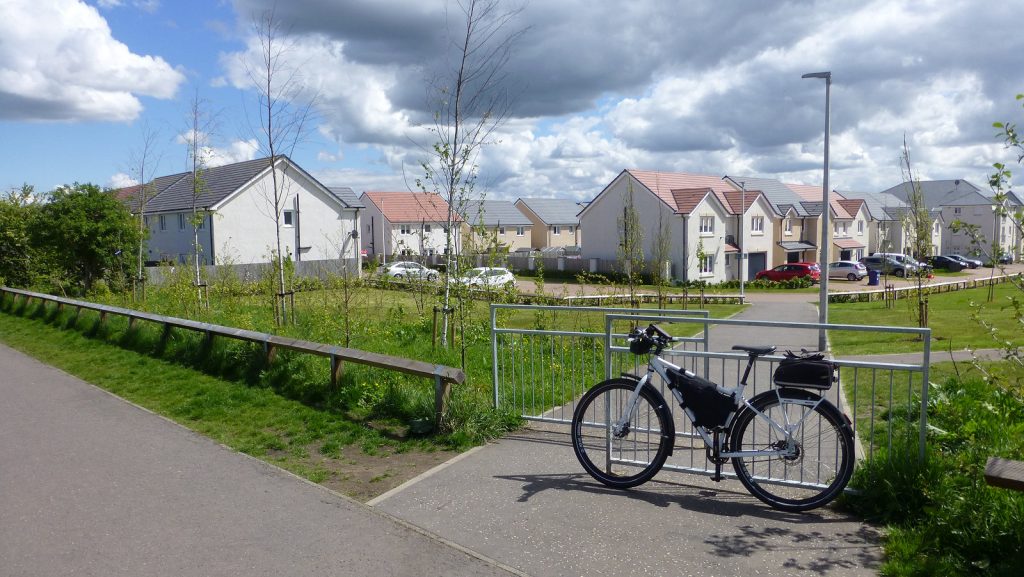 Having tried my luck at bettering my Eager Ferret time of 9:01, achieved on the Loanhead Ferret Run, and managing a time of 9:25 on a local route here in Bonnyrigg, I gave thought to ways and means of improving my chances of a faster time. One of those ways was to alter the gearing on the Surly Ogre bicycle, either by increasing the diameter of the front chainring or decreasing the size of the rear sprocket. As luck would have it, I found an 18-tooth rear sprocket in the shed, an almost forgotten left-over from previous bike builds. It would be a good start as the existing rear sprocket is a 20-tooth. The 18-tooth would make a difference but I really want some smaller and purchased a 16-tooth rear sprocket, the smallest size that will fit.

Swapping the parts is fairly easy, other than one pesky part called a spring clip. It’s one of the simplest of components that are ingenious in what they actually achieve, while at the same time sometimes being a total pain-in-the-butt to both remove and re-fit. To remove them you need at least three hands and when it does spring off, usually Warp Factor 9.8, it vanishes into some blackhole or alternate multiverse. I lost one in the shed once and never found it. And if that doesn’t occur, they can also break into pieces. Thankfully, I always keep a spare handy. Oh yes, and always a good idea to replace the chain if replacing a sprocket or chainring.

With the 16-tooth rear sprocket fitted I was ready for my second attempt and 1.00 am last night was the ideal time. The weather was mild with minimal wind and most important of all, the route between Rosewell and Bonnyrigg should be largely free of dog walkers and the like. I cycled up the route first, Turf app turned off, to check all was okay for the run. I knew the burst water main repairs had been completed and the path resurfaced.

Approaching the cycle path, I noticed three young girls running away from me, vanishing from sight behind some cars. As I approached their last location, I was surprised that they were not in sight. No way could they have run that fast to be out of sight. They had to be hiding somewhere, so I stopped and waited a while. Sure enough, after a few seconds I heard scuffling and voices behind a nearby car. They were making so much noise I had no problem working out where they were. Then one girl popped her head and said “Oh no, he’s still there and watching us!” I left them too it. They certainly didn’t look to be 16 years of age. I wonder if their parents know they were out at this time of night?

It didn’t take long to reach Rosewell and after taking zone HolyStMattew to take advantage of the 5 seconds off the take time bonus, I nipped round top the start zone, HalfwayPath. Then I was off, pedalling for all I was worth. The higher gearing meant I was no longer spinning out and could keep up the pressure all the way. It felt Like I was going faster but I’d only know for sure when I checked the final time. This time I went straight down the cycle path finishing at zone WaverlyPath. No delays along the way but still a few people out and about.

Back home, and while the kettle boiled for a cuppa, I logged on and checked my time on Frut. It was 9:16, only 9 seconds of the previous time of 9:25. A bit disappointing I must say but at least it does look that I might just be able to better my 9:01 time on the Loanhead Ferret Run. But that’s a task for another day. Bye for now.