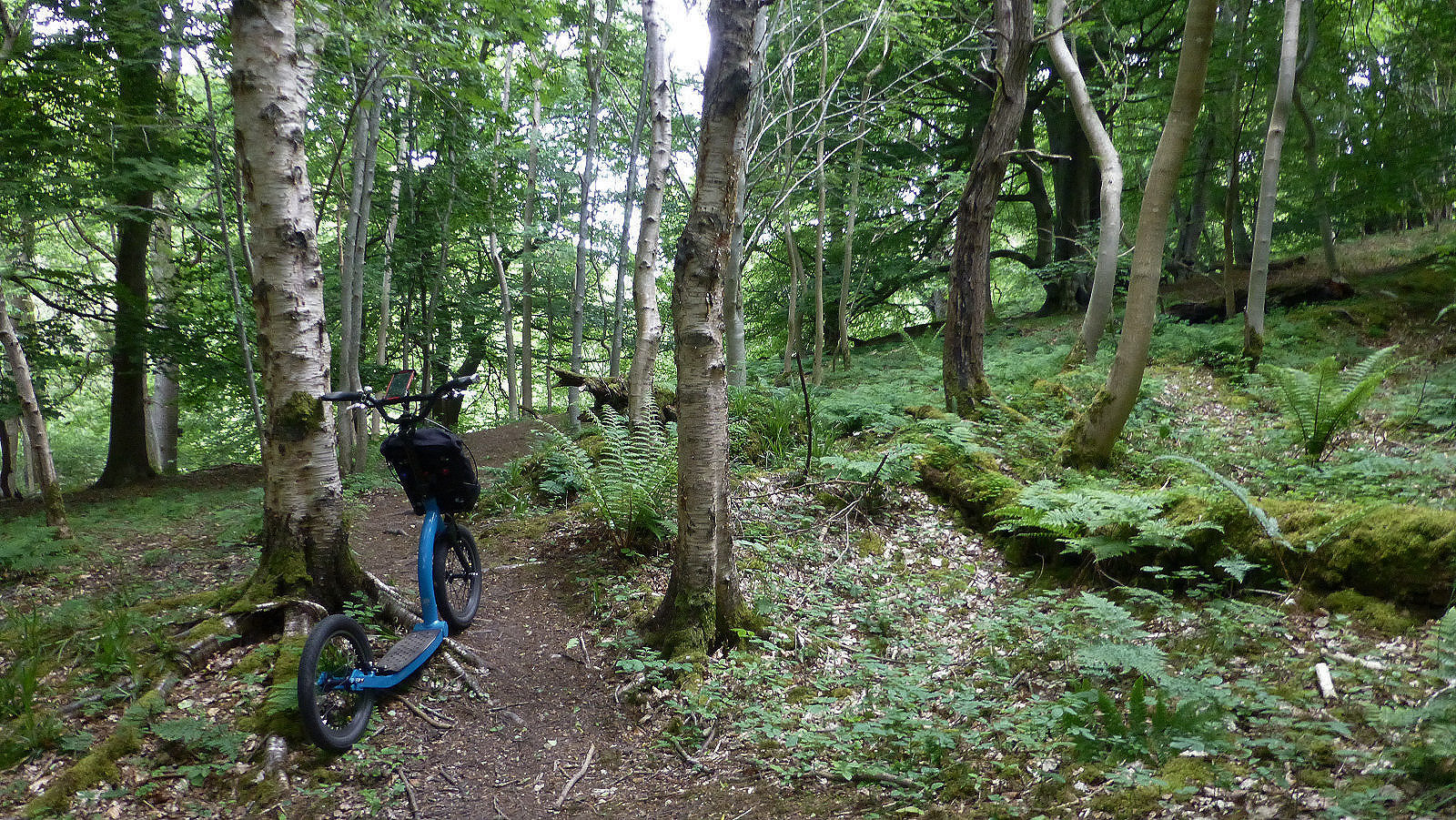 In the 1982 movie First Blood, starring Sylvester Stallone, the town’s sheriff, Will Teasle, played by Brian Dennehy, asks the question, “Whatever possessed God in heaven to make a man like Rambo?” And once I arrived at zone WallacesCave I asked myself a similar question, “Who on earth created this zone?” I asked this because I would like to shake his, or her, hand. I like these more challenging zones and have the odd one or two to my own name. HiddenCast might ring a bell with those who have been there and there’s the two submarine wrecks out in Aberlady Bay as well.

Wallace’s Cave is situated on a rock ledge in sandstone cliffs dating to the Carboniferous period, some 18 meters above the River North Esk near Roslin Castle, and is one of many such caves through to be a hiding place of Sir William Wallace – that’s the chap in Braveheart played by Australian Mel “Mad Max” Gibson. 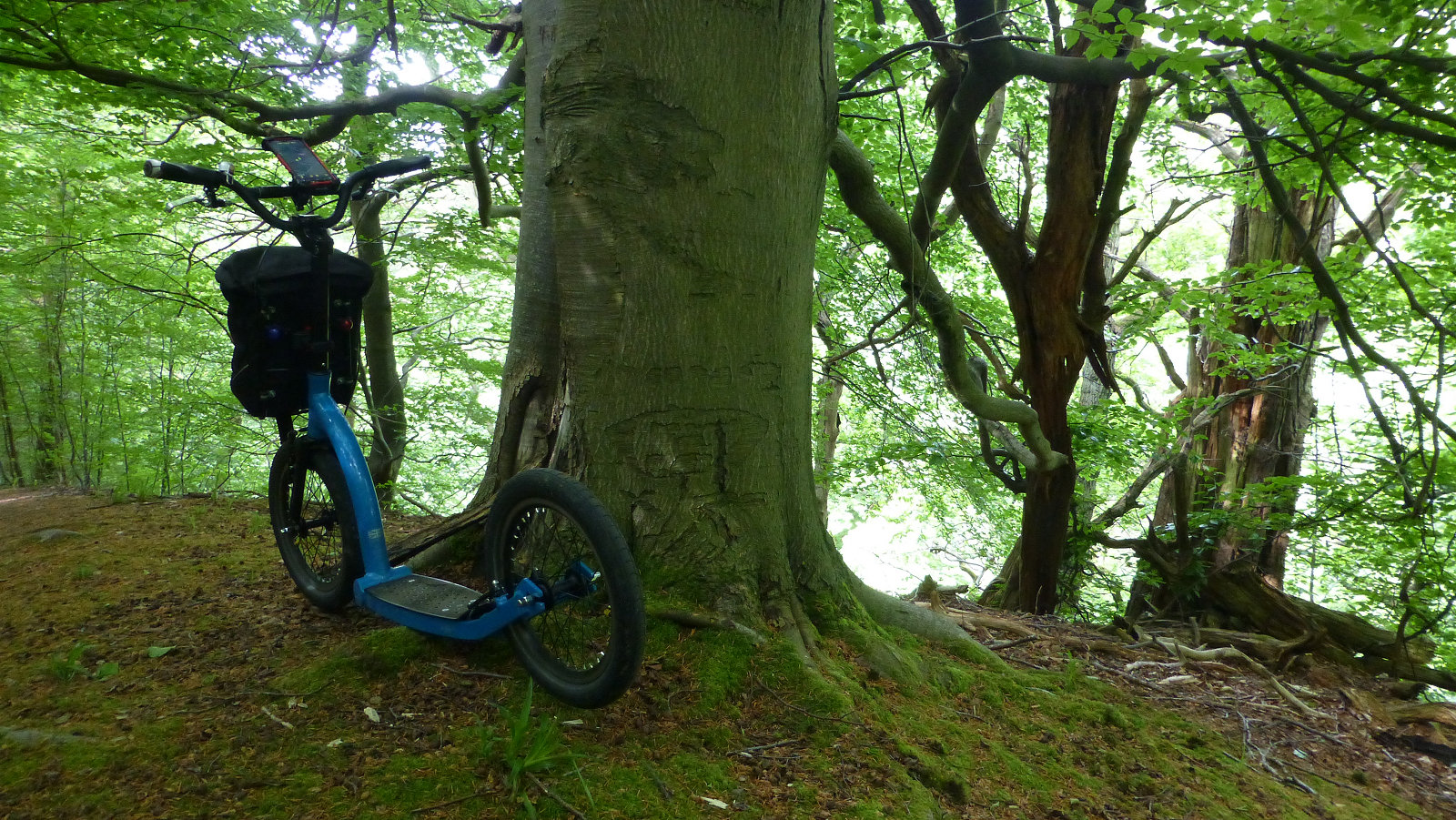 Access to the cave is best from the B7003 Roslin Glen Road and I would suggest leaving the bicycle at home and go on foot. There is a handy lay-by nearby. However, being of a rather daft persuasion, I chose to take the Swifty Air kick scooter – so far I’ve managed to follow my self-imposed planet-saving rule not to use the car for turfing – so kick scooted up the Dalkeith to Penicuik cycleway from home in Bonnyrigg.

The route is through Roslin Glen Nature Reserve, managed by the Scottish Wildlife Trust, though not sure if that includes the area where the cave is located. For interest, Wallace’s Cave is a designated ancient monument and of national importance, which at least offers some legal protection to the site. The trail begins about 40 meters to the north from the parking area, beside the sign post for the nature reserve. 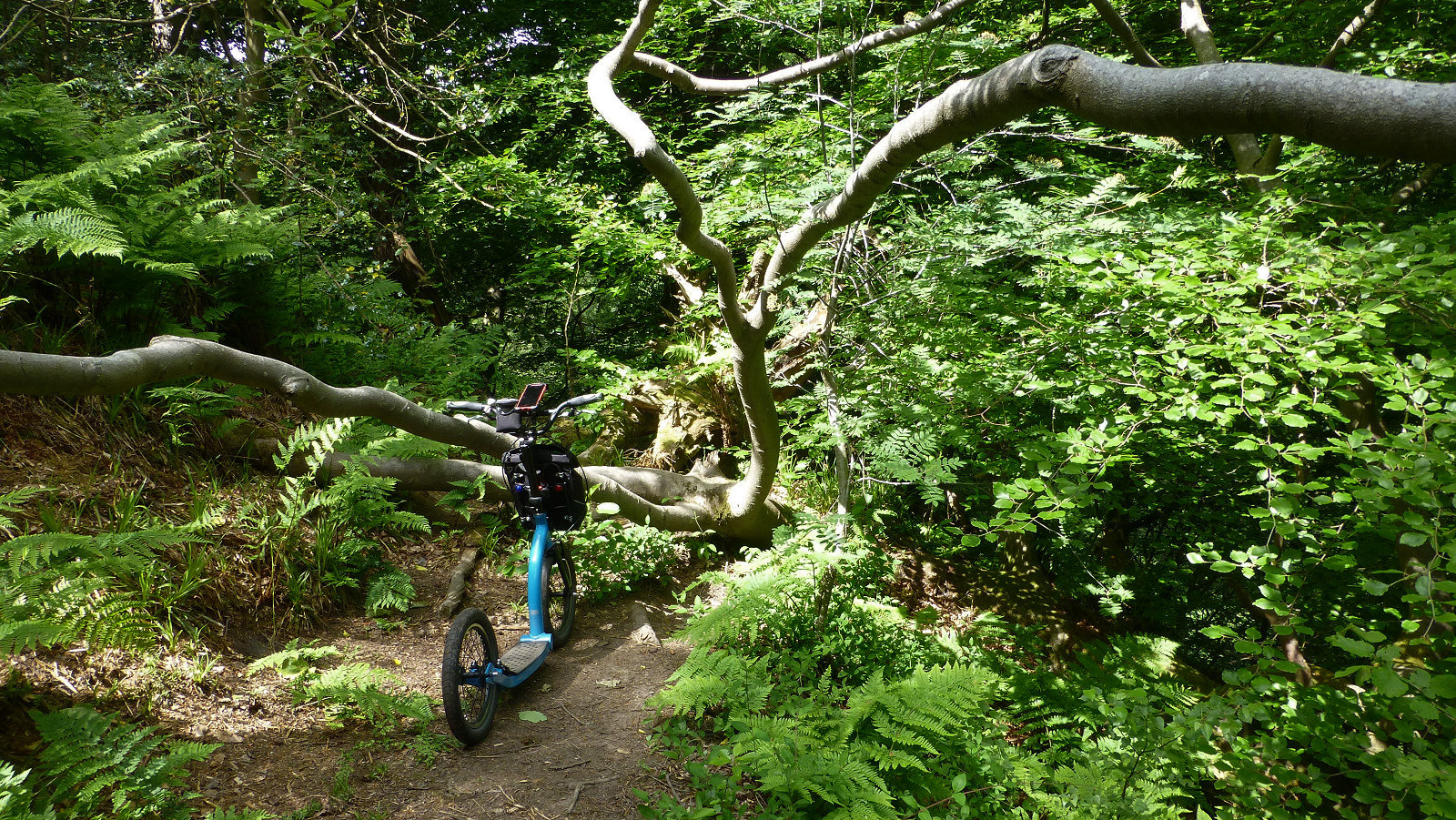 Now the fun begins. Foolishly wearing shorts again, the first obstacle to overcome was the stinging nettles but after some interesting twisting, turning and hop, skip and jumping, I managed to remain sting free, which is quite a triumph when riding a kick scooter. The path itself drops downhill, then heads off downstream along the cliff tops, has various muddy patches and can be indistinct depending on the volume of visitors to the site. The second obstacle is where the path crosses a small stream below Castle View, a rather fine looking house which I’m going to purchase when I win the lottery, though you are aparently more likely to be struck by lightning than win the lottery.

The stream has formed a deep gorge and the path in and out again is little more than a loose dirt game trail and almost impossible in wet weather. I would strongly suggest you visit here in dry conditions. I was able to carry the scooter across fairly easily and anyone who tries the same with a bicycle deserves a medal. Numerous fallen trees present only minor challenges and you soon come upon the zone. Thankfully, you can actually take the zone without having to descend the precipitous stone-cut steps down the exposed face of the cliff. Myself, however, being of decidedly unsound mind and will do almost anything for a good photograph, decided to carry the Swifty down with me, just for you, the reader, to see I’d been there. That’s the kind of guy I am. 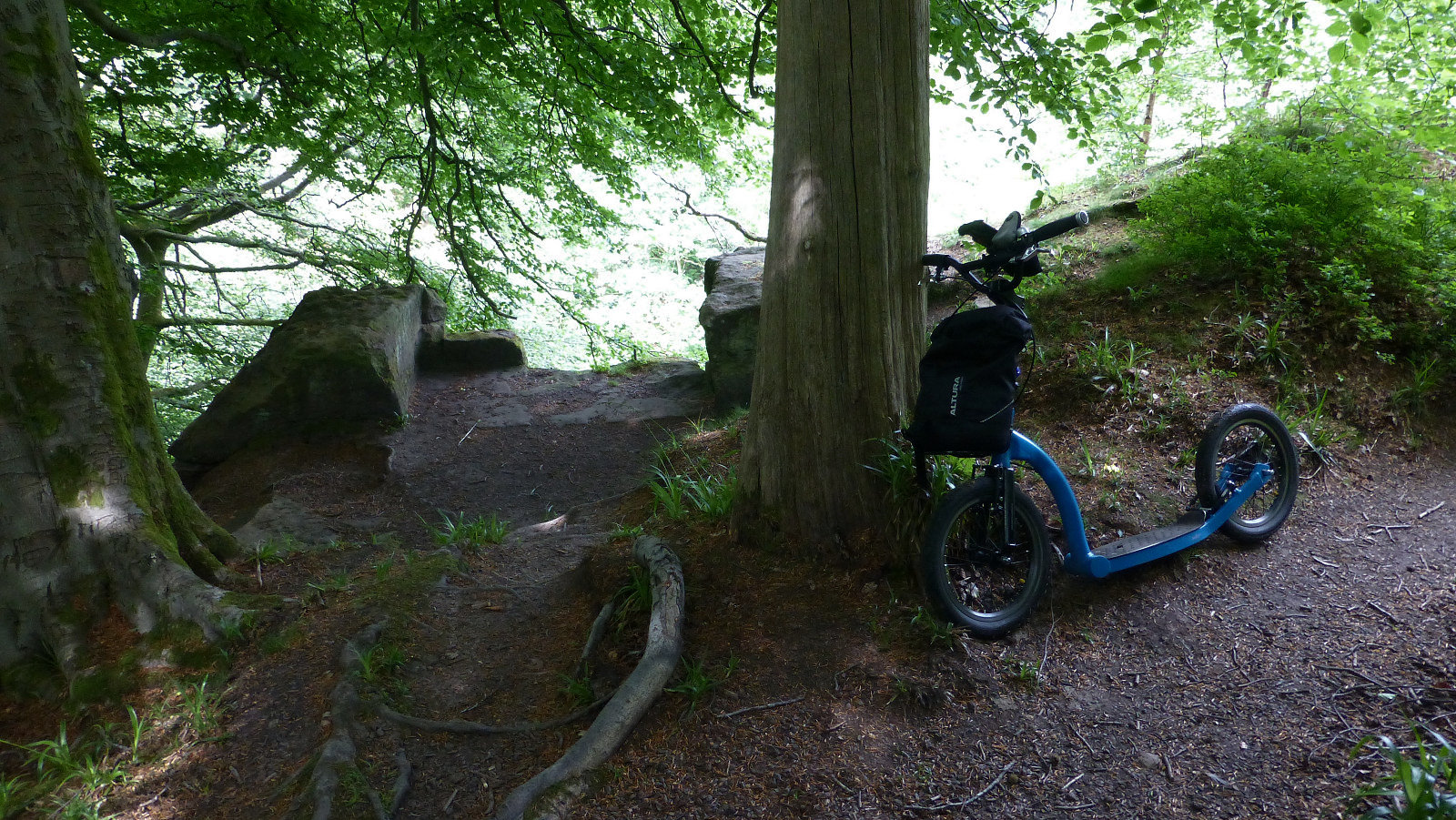 It goes without saying that great care is required going down the stone steps. There’s no handrail or guardrail and a build-up of loose debris on the steps makes for an unsure footing. The cave itself is easy to enter and quite spacious, though claims that it once held 70 of Wallace’s men might need to be verified. The interior of the cave is dark and damp and not very inviting. There was an overwhelming whiff of hydrocarbons there today. Not sure if this is of natural origin, or from spilled fuel from previous visitors. I didn’t hang around very long. There are some Bronze Age rock carving for those who are interested. 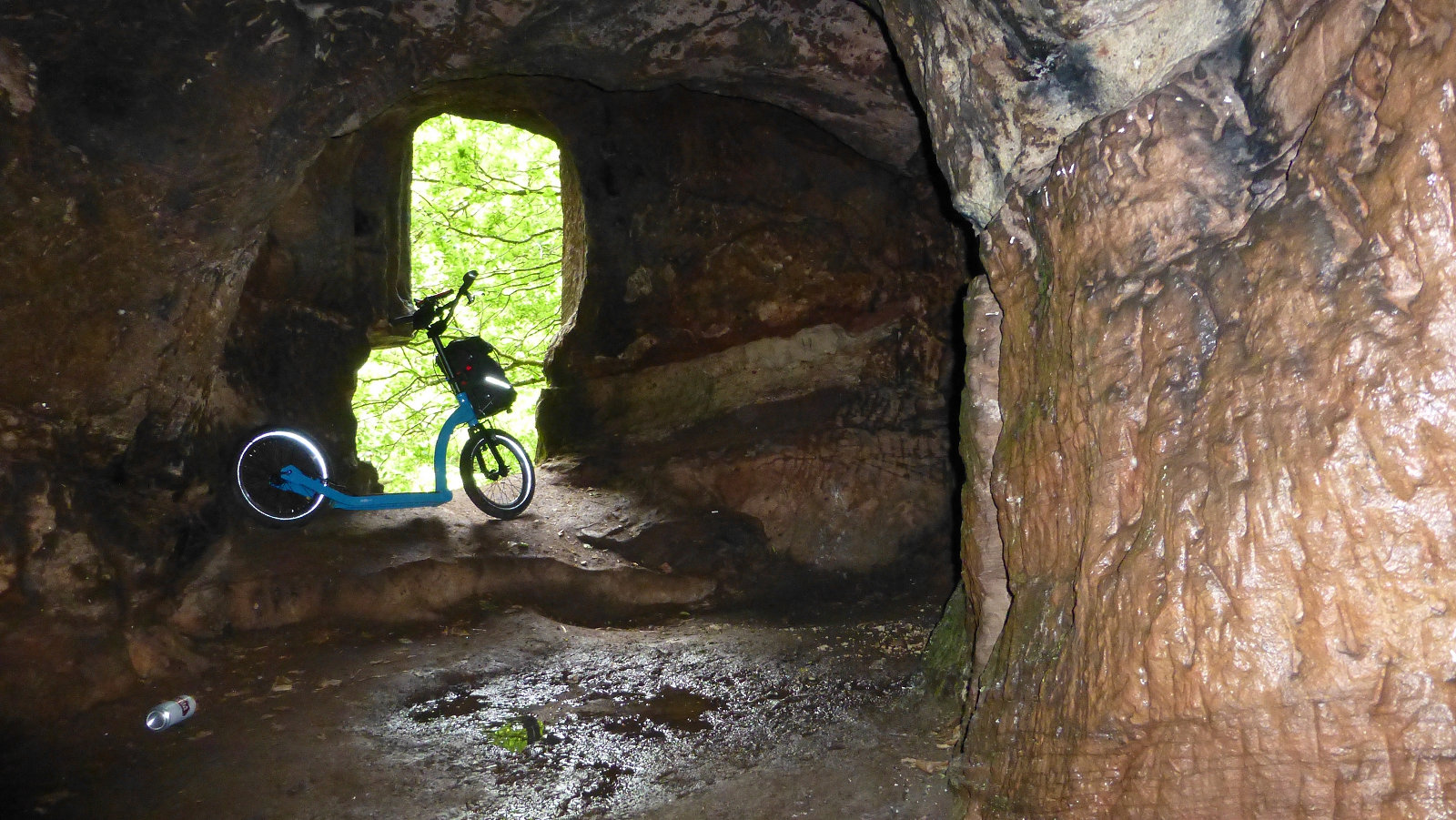 With the zone taken – 185 points for this one, a clear indication on how popular this zone is with turfers – and photos for the blog on the media card, it was back the path I’d followed earlier. And yes, the stinging nettles were waiting for me and got their own back. Might be a good zone for a night visit. Keep on turfing.