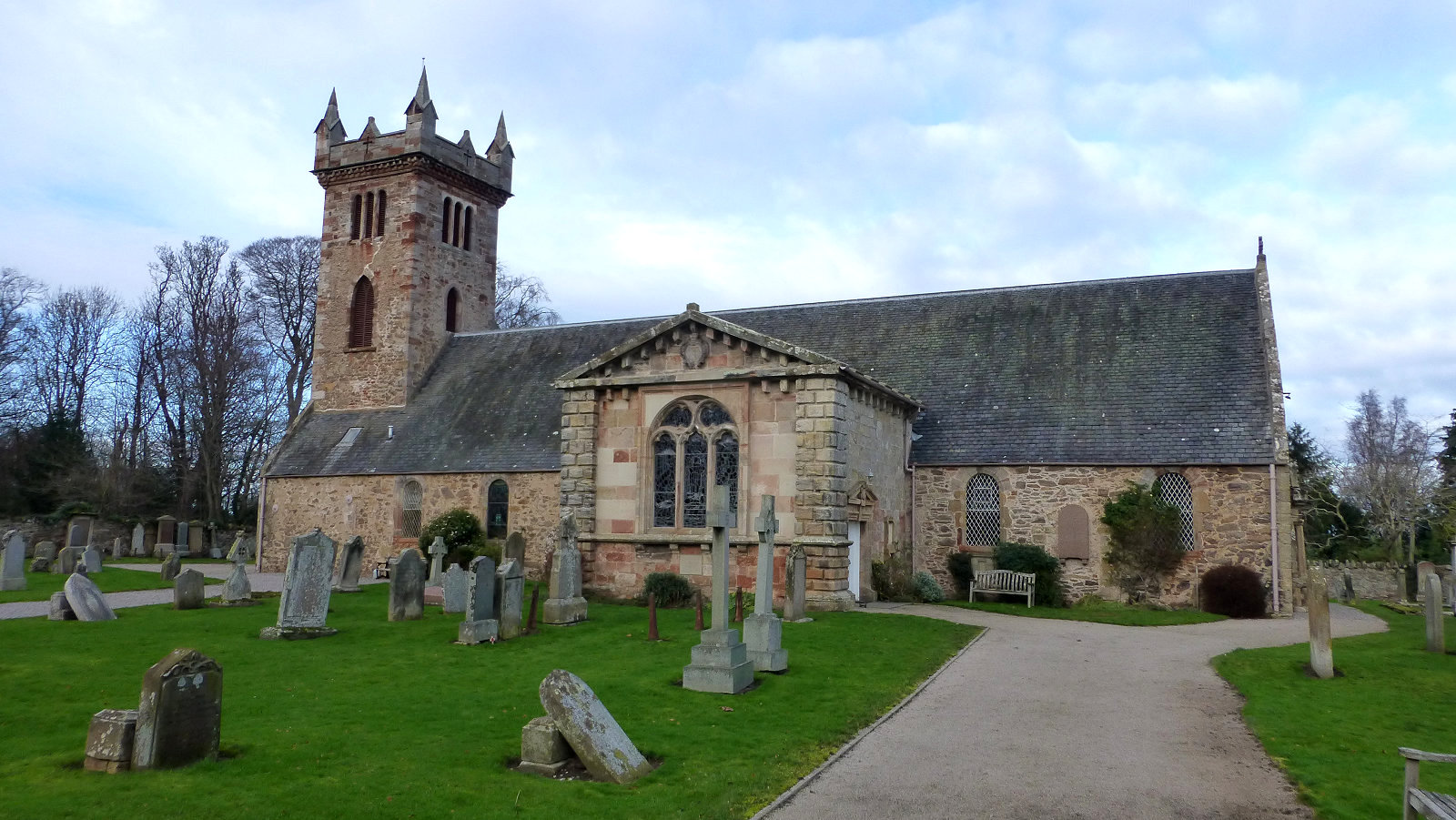 Today was the perfect day for turfing at the coast. The weather was cold and windy, but also bright and sunny, I had the car at my disposal and desperately needed some time to myself following my father passing away last week. I initially thought about taking the fat bike but a few recent twinges from my back suggested walking might be a better idea, so boots rather than bike it was. My destination was the coast between Gullane and North Berwick. Plenty of fresh uniques for the taking. But that wasn’t all. I’d inherited a lovely pair of Leica Trinovid 10 x 25 binoculars from my father and wanted to test them out along the coast. Well, inherited isn’t strictly true, more a case of getting first dibs on them before my little sister did. I did give her my spare Leica binoculars, so she’s happy.

The Green, Dirleton, was my starting off point, leaving the car outside the church and following the tarmac path of the John Muir Way towards the Archerfield estate, and into a cold biting wind from the west. That’s the trouble with leaving a warm cosy car, you really notice the cold outside. And the cold wind makes my right eye water for some reason, not the left eye. Of course I blink to clear it and end up spluttering my glasses with tears and need to clean them. However, turning right at the road I picked off my first zone of the day, zone Archerfield, and also gained some shelter from the wind. 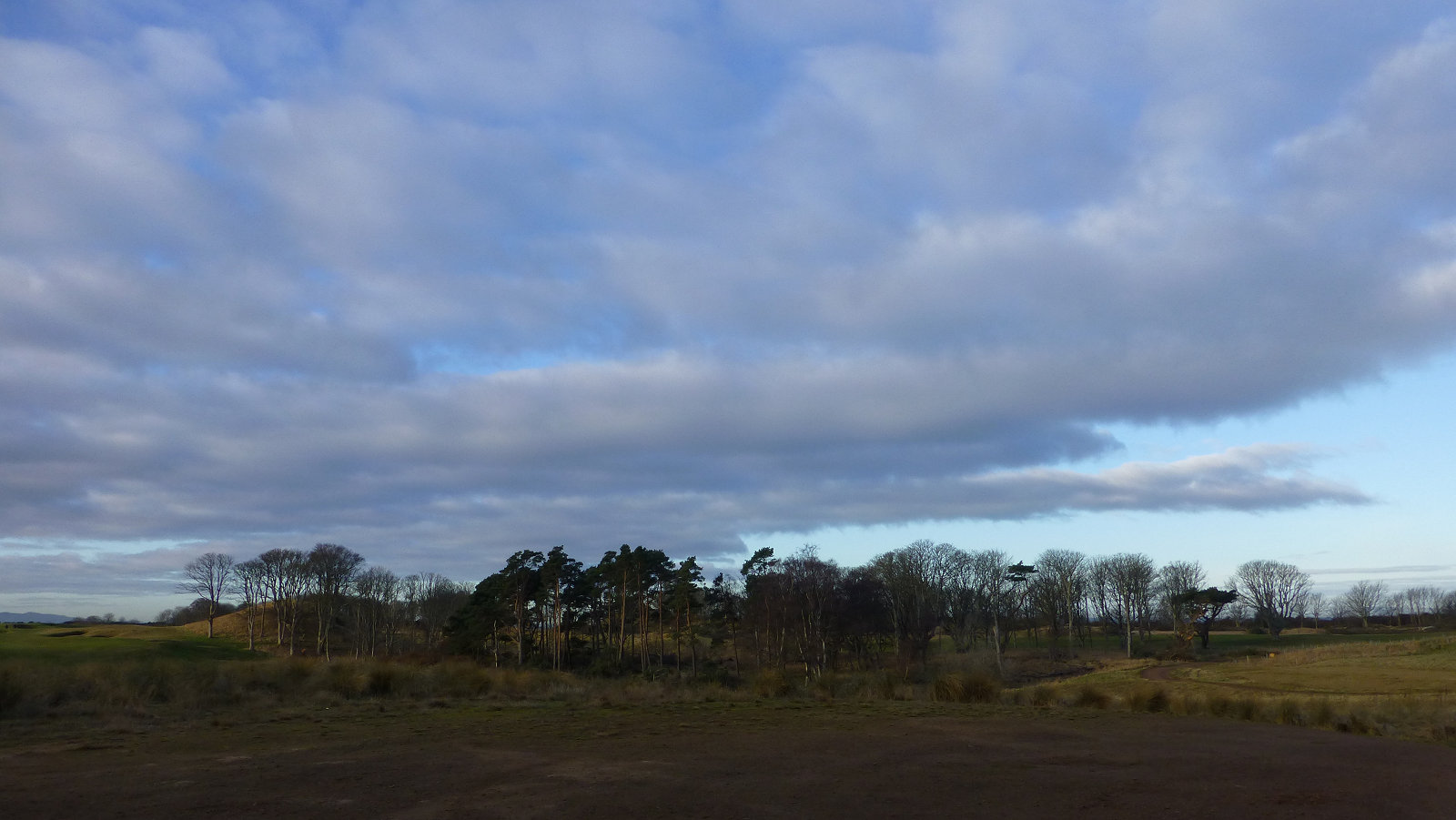 I now followed the road towards the expensive houses of Archerfield and I mean the really expensive houses. In fact, Archerfield is pretty exclusive, if you have plenty of money. There’s two top-class golf courses, The Renaissance Club to the left and Archerfield Links to the right. I won’t mention how much it costs to play at either, you would fall off your chair, suffice to say you could buy a house for the price of a debenture. As I walked along the road, I felt as if I was intruding. I could almost imagine hidden eyes watching my every move to check I wasn’t up to no-good and half-expecting private security to stop and question me, a bunch of ex-special forces blokes jumping from a Range Rover. Of course, nothing of the sort occurred and I picked off another three uniques, zones ClubDoor, GolfLinks and EastLinks.

Before walking across The Renaissance Club golf course to reach zone UpperLinks, I watched some golfers reveal that having enough spare cash to allow you to play here does not make you a good golfer, far from it. Crossing the course was easy enough as the course wasn’t busy, though plenty of green keepers busy working away and recent Storm Arwen has downed plenty of trees, evidenced by the piles of felled and cut timber in the area. Zone UpperLinks is located in West Links, an extensive dune system which has a good number of deer, through you need to be careful in the summer months as ticks are there a plenty. Next, I followed the trail across to the shore and my next zone, WestLinks. 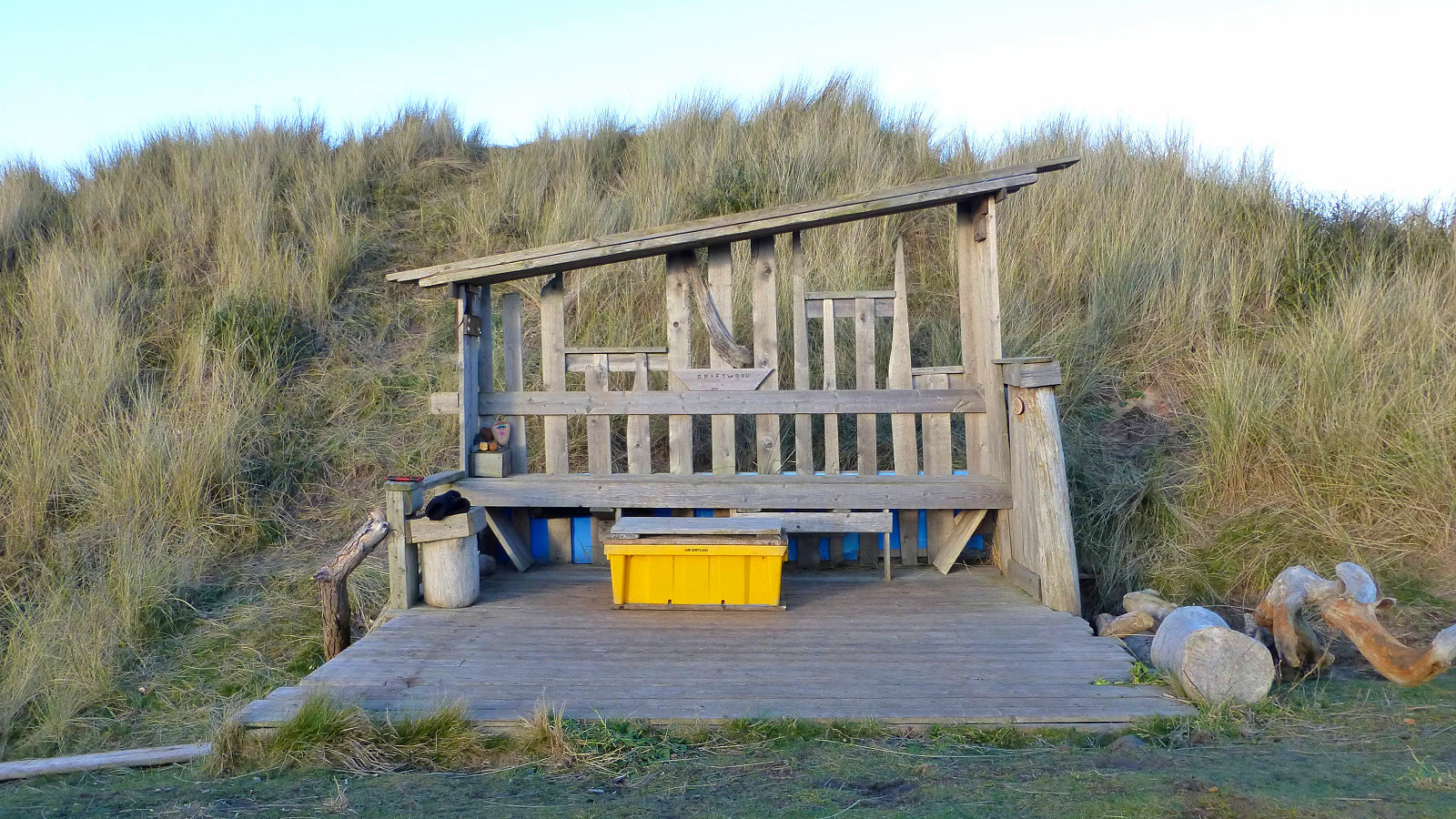 This zone features a small shack or shelter made from driftwood and bears a plaque of the same name and makes a nice sheltered spot for a break, or picnic, or whatever. But it wasn’t lunchtime yet, so onwards. My route followed the path along the shore, now heading east. I decided to leave the five new unique zones to the west, between here and Aberlady Bay, for another day, perhaps on the fat bike. With my back to the biting cold wind, the going was much more pleasant. Today, as well as hunting zones, I was also on the lookout for small pieces of driftwood, for a craft project I have in mind and it didn’t take long before my rucksack was bulging and heavy. More on this project another time.

The sandy bay opposite Eyebroughy, a small tidal island you can walk to at low tide, is the location for zone PropMemorial, a recent feature to the area. The stone cairn has a hole through the centre through which you can view the island of Fidra just off the coast and a propeller attached to the side. Unfortunately, I cannot recall what the memorial is actually for. 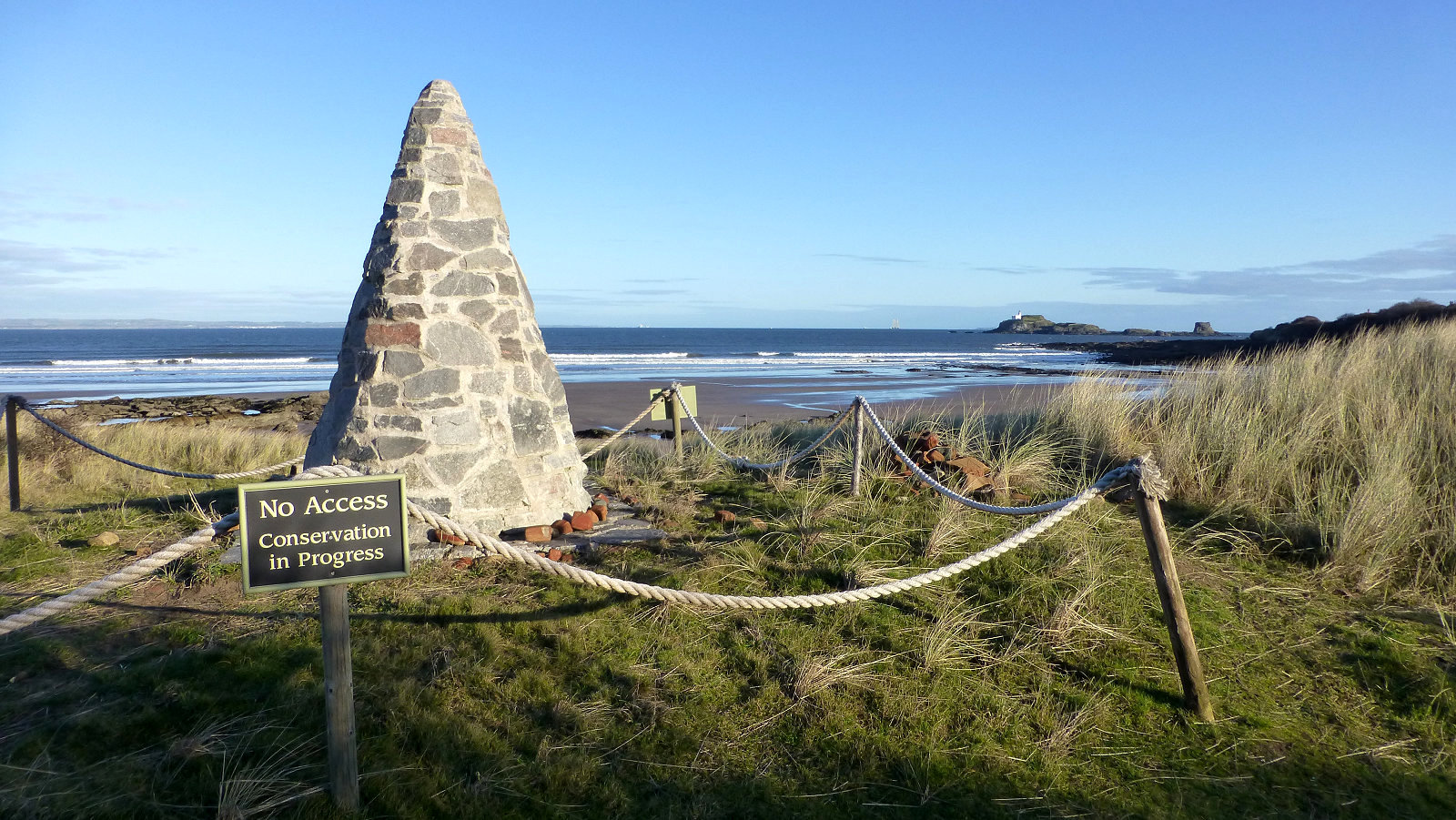 Continuing along the coastal path, my next zone is the tongue-and-cheek named, CheapShacks. I stopped and chatted to a couple of joiners who were erecting a substantial timber ramp leading from the rocky shore to the footpath. Previously it was quite a struggle to haul the fat bike up a steep and slippery slope from beach to path. What a difference this ramp will make. I’ve heard it was funded not by the local council but by The Renaissance Club. I take my hat off to them and retract any negative comments I’ve made. What good chaps they are.

The zone CheapShacks is found opposite King’s Cairn, an expensive housing development of, to quote the online blurb “superior bespoke homes”. It’s one of those places where if you have to ask the price you probably cannot afford them. The houses facing the Forth of Forth seem to be around the £2,000,000 to £3,000,000 range. If I was spending that kind of money, I’d want a bit more privacy than you get here. 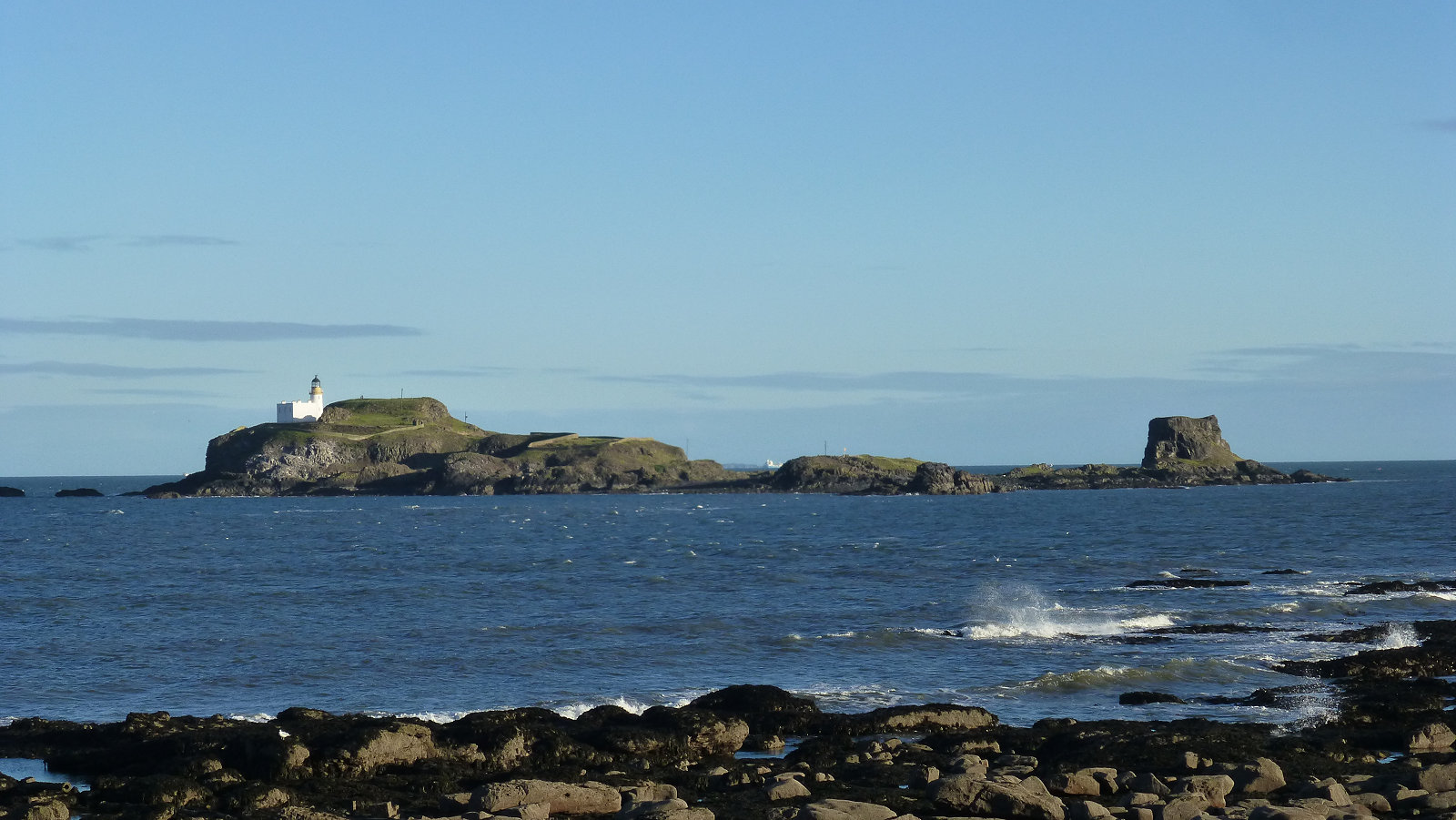 Onwards, ever onwards, and still heading east. FidraView was my next unique, followed by zone Yellowcraig after a short walk around Yellowcraig Plantation. The next two unique zones were YellowWoods and TheNinthTea, located either side of an arable field, the footpath running diagonally across the field, which does seem rather odd. I have a thought in the back of my mind that this is actually a Right-of-Way but cannot recall for certain. This was as far east as I was intending to go. I still have plenty of unique zones in North Berwick, enough to warrant a separate trip with either bicycle or kick scooter.

Retracing my steps, I detoured slightly across to the beach, found a sheltered spot out of the wind and settled down for some lunch. I love being at the coast here. The view is quite splendid. As I scoffed a couple of rolls, I watched some brave souls swimming in the bay, dogs were having great time running about chasing balls and splashing in the surf. 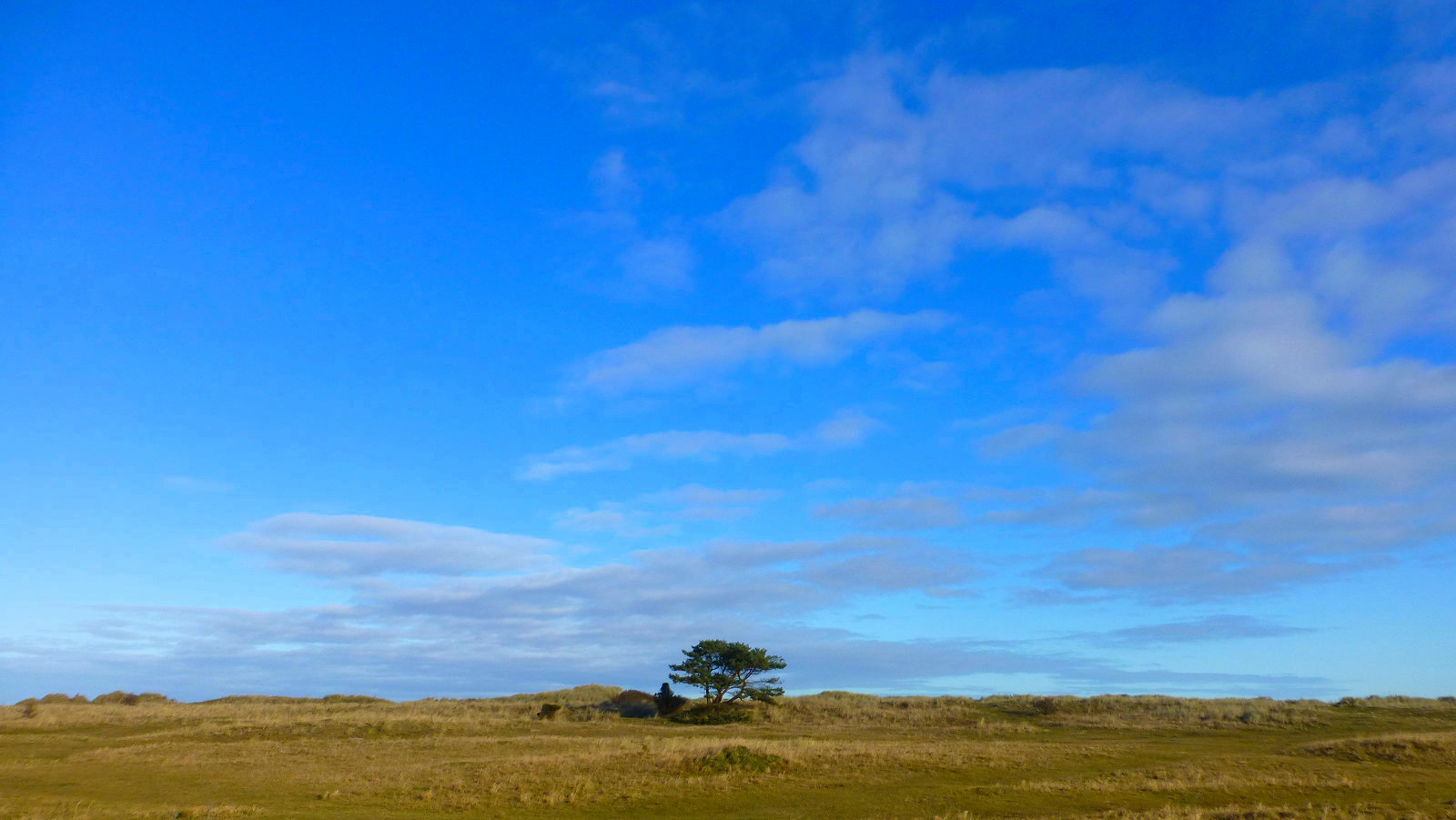 To my right the brooding bulk of North Berwick Law, next the glowing white mass of The Bass Rock (the white is actually Gannet droppings!), then the wee islands of Craigleith and The Lamb. To my left the island of Fidra, a designated reserve owned by the Royal Society for the Protection of Birds (RSPB), with its white-painted lighthouse. Why would you go abroad when you have all this free on your doorstep? Yes, I know, because it’s warmer!

The car park at Yellowcraigs gave me the oddly named zone ChickenPark, then it was along to The Village, another area of Archerfield where houses come with a £3,000,000 price tag. I picked off zone InTheNavy, then tried to take zone MiniDjungle but failed to get a connection with the server. I tried for some time but eventually gave up, even tried restarting the mobile. However, as I was walking away the app started to populate again, so I returned and managed to take the zone this time. As I walked along the road, looking at the houses, with their 6 bedrooms, 8 bathrooms, four-car garages and brand-new his and hers Range Rovers in the driveway, it just all seemed too excessive and unnecessary. 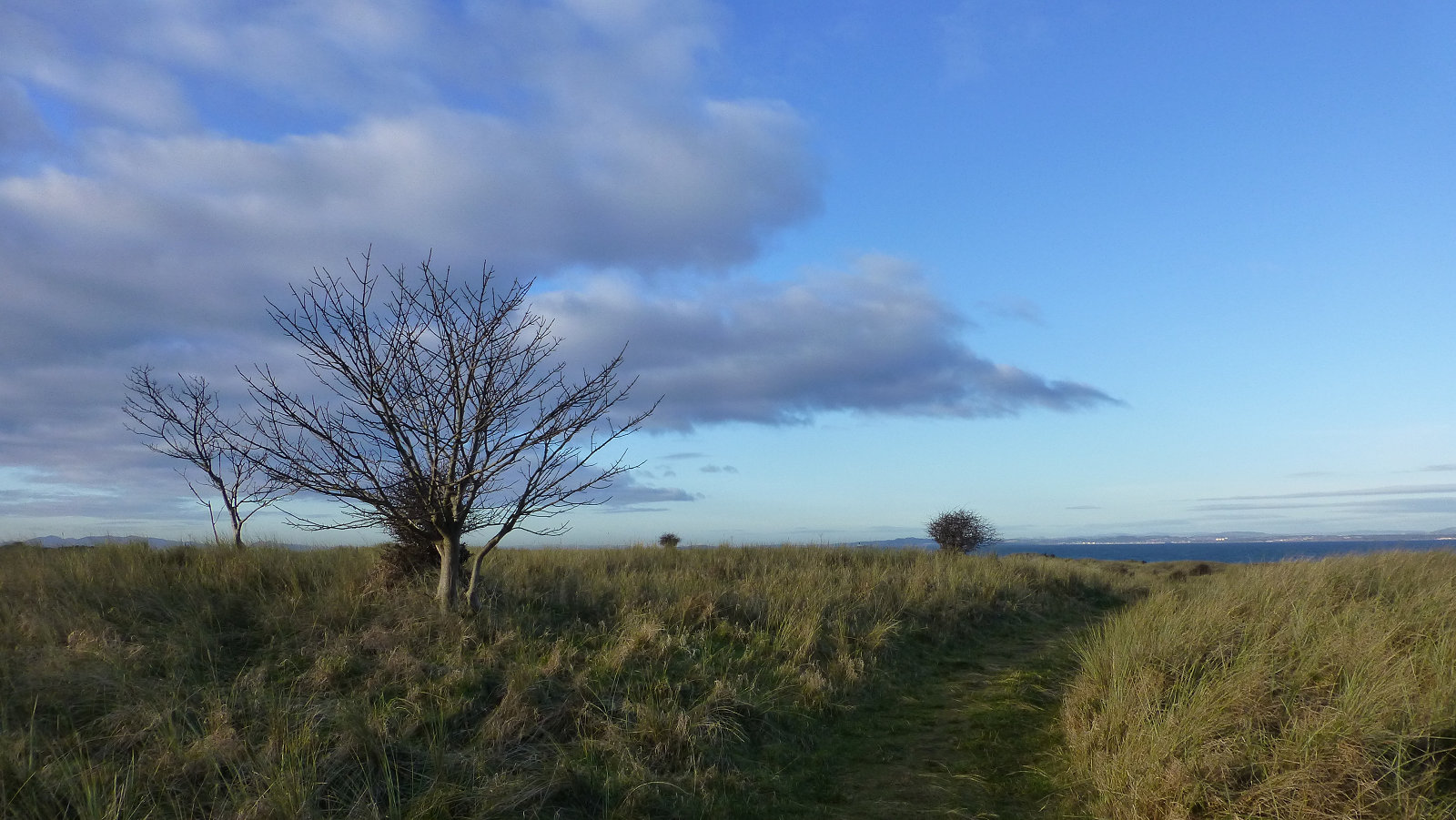 Back at Dirleton, I rounded off the day with zones DirletonKirk, Dirleton and DirletonGreen, then headed for home pleased with another 14 uniques in the bag and enjoyable walk at the seaside. And the Leica Trinovid 10 x 25 binoculars I’d inherited from my late father were excellent. They will now accompany me just about everywhere. Back soon.