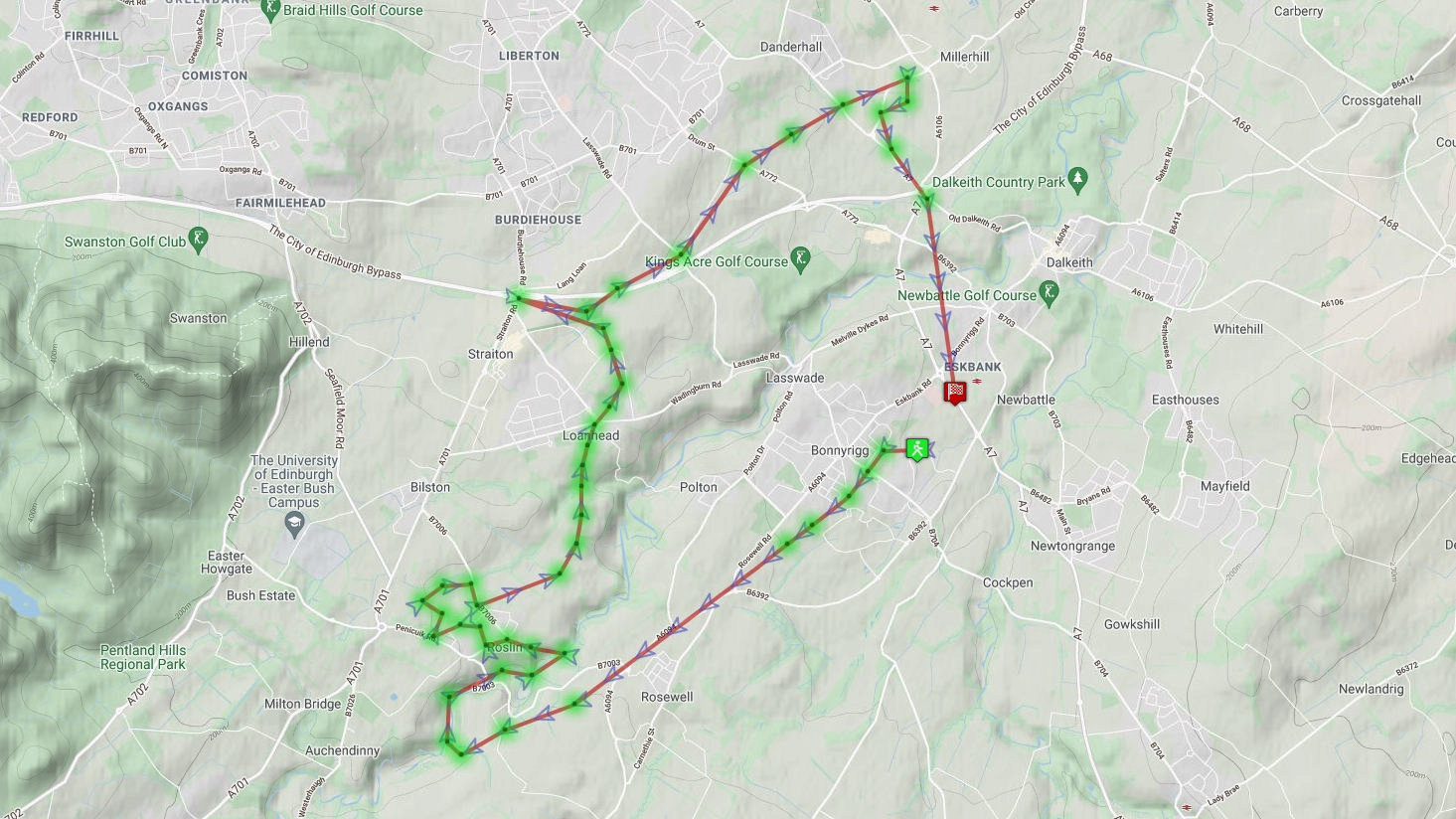 Having failed dismally to find unique zone NorthEskPath, near Rosslyn Castle, the other night, I decided to return during daylight and try for a second time. I knew roughly where the path was I wanted to follow and was confident I would be successful this time round. My mode of transport this morning was the Swifty Air kick scooter as I knew the path was a pain in the butt with a bicycle, so the lighter, nimble and easy to manage Swifty was ideal. It’s not the place to lug a bicycle about with you, I’ve been here and done that before. Using the scooter also offered me the opportunity to take a few different images of the zones.

My route followed the Dalkeith to Penicuik cycleway from home in Bonnyrigg and having taken the local zones along the route yesterday, I had little to take until the other side of Rosewell. It was only once on the cycleway that zones where available for the taking, with three falling in quick succession to the mighty Turf app, before I dropped down the steps to the leafy glades of Roslin Glen and the remains of the gunpowder mill.

It was very pleasant here today with dappled sunlight streaming through the fresh green leaves on the trees. Bird were singing all around and the River South Esk was tumbling by below me, just as it has done since the end of last Ice Age, some 12,000 years ago. If you are interested in fossils, you can find fossilized tree ferns from the Carboniferous period in the gravel beds along the river. I also made a mental note to return to collect some sand samples for the collection.

After grabbing a couple of easy zones, NoSmoking and ThreeHares, I scooted down the road to the almost empty parking area, taking zone RoslinPark before crossing the river and tackling the short climb to zone RosslynCastle, located under the castle itself. Then the adventure to find the lost zone called NorthEskWay began. The path begins under the bridge to the castle, follows the river downstream, then ascending for a short distance. The path is a mix of muddy footpaths, timber boardwalks lined with stinging nettles just perfect for the turfer wearing shorts. I sometimes think nettles have evolved to grow just where people walk past in shorts. 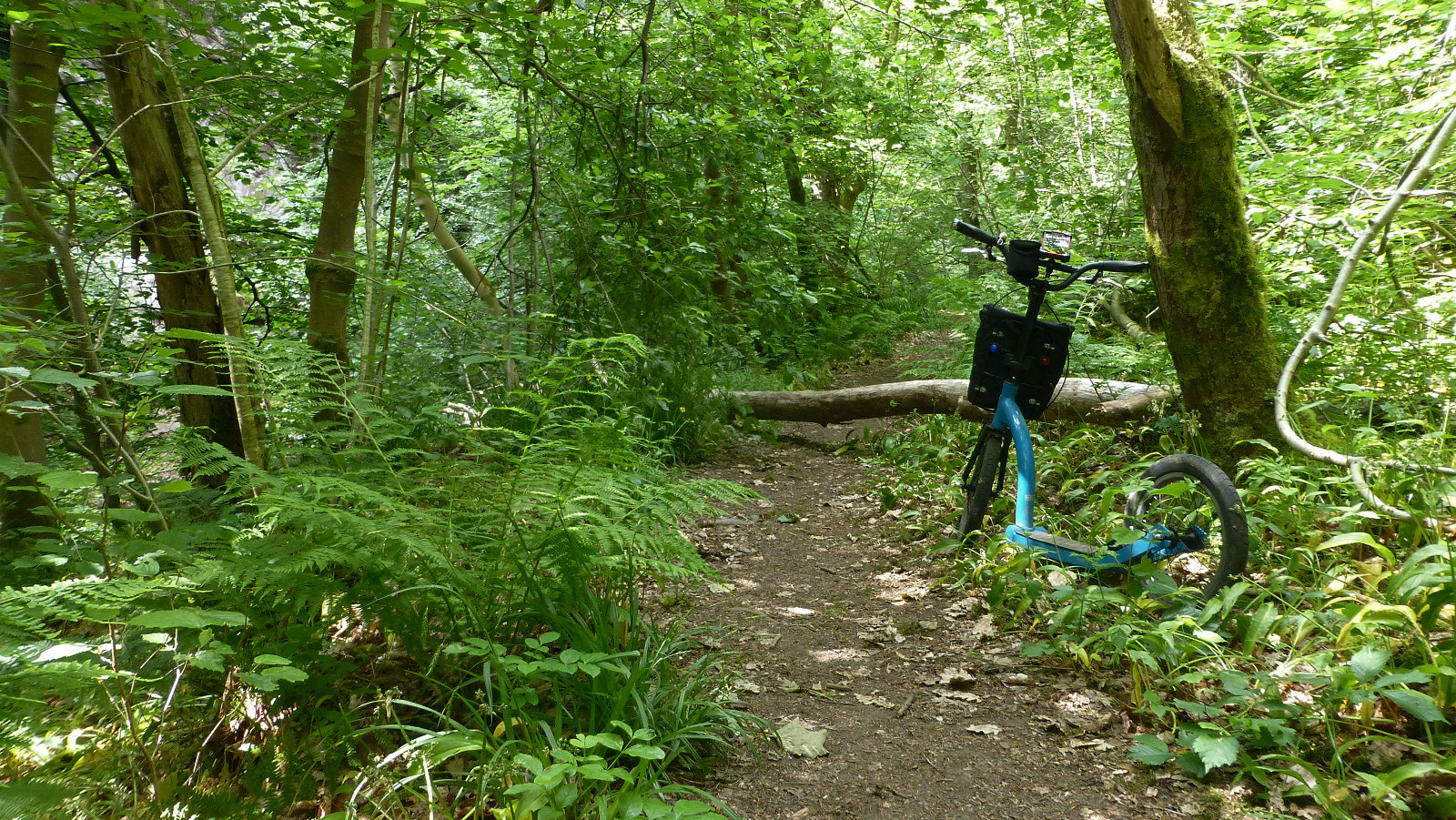 The path down to the zone is not all that obvious, no sign posts or anything but it’s the first one on your right you come across. It’s very steep in places, has awkward stone steps, slippery when wet (but bone dry today) and at the moment, is a dead end due to a landslide. However, the zone was easy to locate and was taken without any GPS issues. It would have been nice to continue along the path but there was no other sensible option other than to return back to the castle. Met a few people along the route and a very friendly dog called Grace who wanted to follow me on the scooter rather than her owner.

With my main mission accomplished, I used the rest of the trip to take zones in the area, first a quick tour of Roslin, giving me eleven zones for the tally. I was surprised how quickly I was able to scoot around the village, seemed almost as quick as cycling but was obviously slower. At zone RoslinBike, I got the photo I’d been after for a while and also followed the path under the road to see where it ended up. Roslin was the answer. Hoped it might have linked to the cycleway to Shawfair but no such luck. 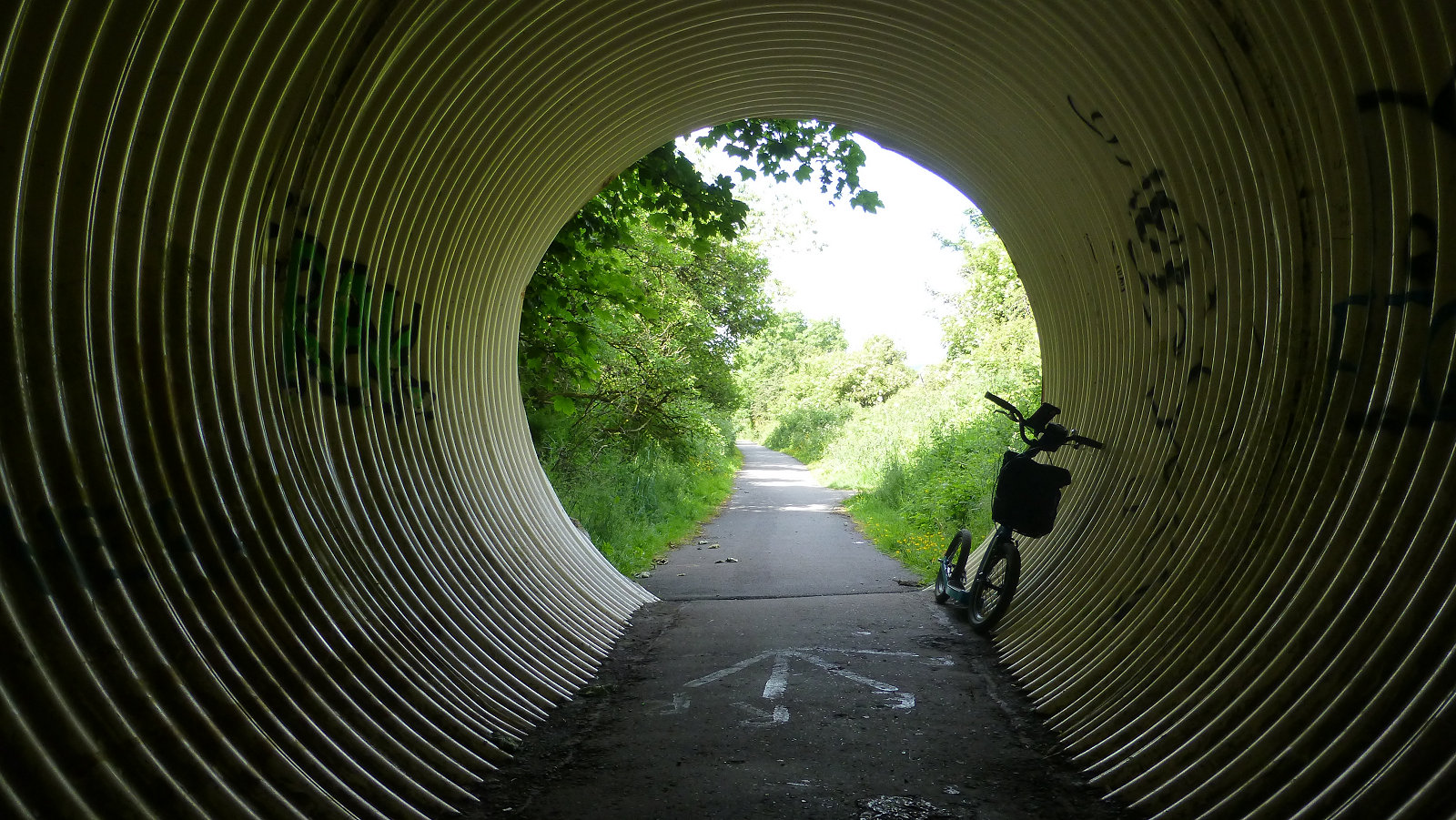 I now followed the busy cycleway towards Shawfair, picking off twelve easy zones. Was tempted to try for an Eager Ferret on the Swifty scooter, just for the fun of it, but it was getting rather hot and I needed to refuel as my energy reserves were beginning to run dry. However, before stopping for lunch, I spied another unique zone, BypassZone, not too far away at the A720 Edinburgh bypass. A long dirt track climb up from Straiton Pond to Straiton Retail park and a quick downhill scoot gave me the zone. Cannot say I was very keen on the busy traffic congested environment after the calm and peace of Roslin glen.

Lunch was taken at Straiton Pond in a nice shady spot under the beady eye of a pair of mute swans and their brood of four cygnets. Not sure if they were watching me or the rolls I was munching, perhaps hoping for a handout. Refreshed, refuelled and raring to go again, it was back onto the cycleway and a great run down to Shawfair. Though not quite as easy as previous trips with an easterly headwind forcing me to actually kick scoot most of the way. Normally, it’s pretty much a free wheel for much of the route. 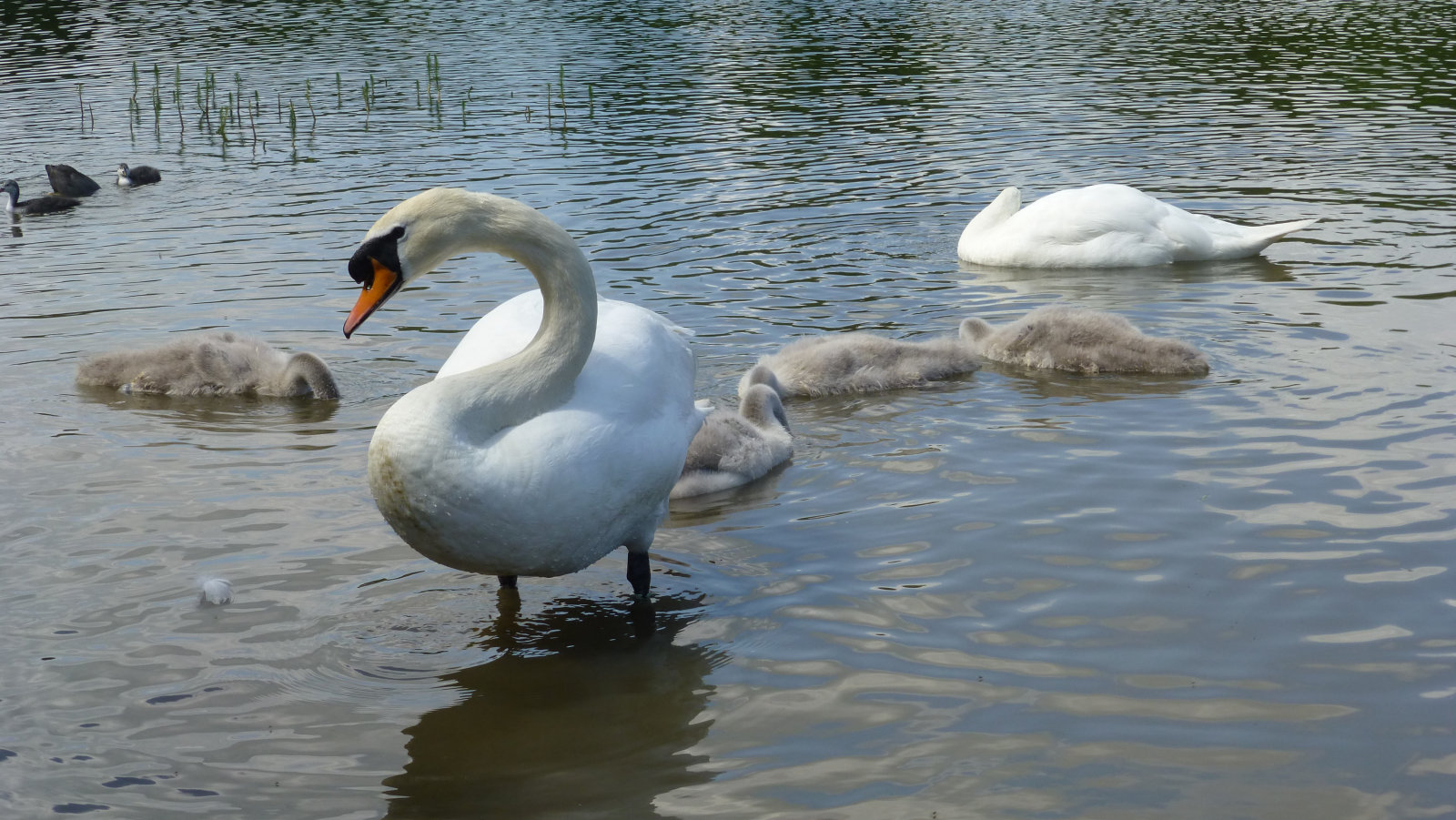 Another five zones were added to the pot then I was in Shawfair. First zone here was Kaims, then off-road again along a glacial feature called a kaim, to pick of another zone, KaimsGlacial, before taking another two zones nearby. It was here that a memorable wildlife encounter occurred. I was merrily scooting along when two somethings dashed out of the vegetation from the right and stopped at my front wheel. Looking down I spotted a dead rabbit. The other something was running off to the right, a stoat.

Knowing the stoat would not abandon such a prize, I settled down about five meters from the dead rabbit and sat very still and quiet, wishing I’d worn something less obvious than a yellow t-shirt. After a few minutes the stoat appeared further down the trail, looked in my direction, then vanished into the vegetation. A few moments later it emerged at the rabbit, grabbed it and trotted off along the trail. With the rabbit actually larger than the stoat it could only manage about a dozen steps before dropping the rabbit, grabbing it again and running off. I was really pleased to see that.

Then it was off for home, risking life and limb crossing the Sheriffhall roundabout, and the busy A7 back to Bonnyrigg. Overall about 50 takes, including two uniques to me but what really made the day was my encounter with the stoat and the rabbit. Just wish I’d though to take some pictures or even video with the camera. Until next time.