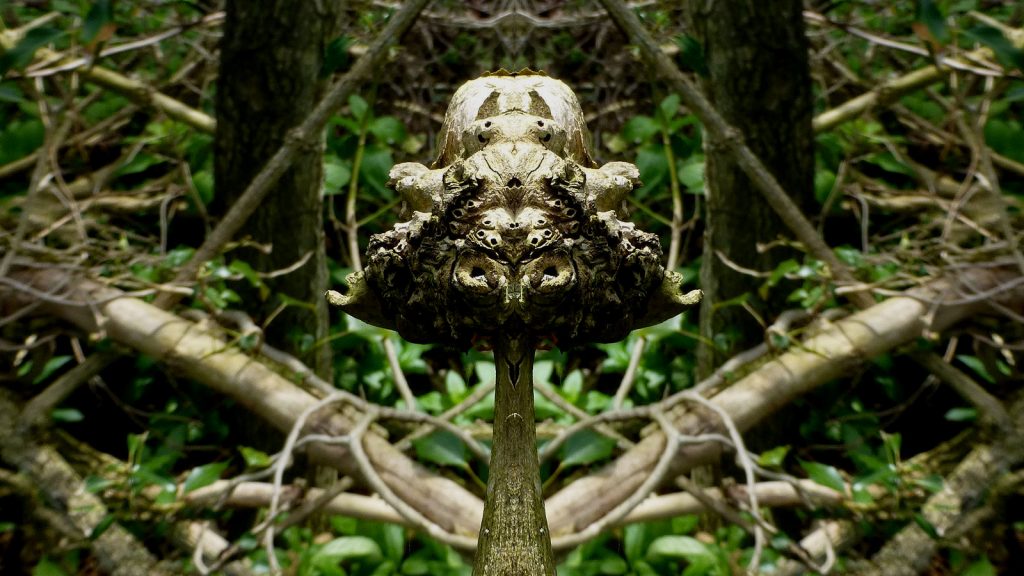 Having recently discovered a new photographic subject, that of creepy monster faces found in nature, mainly on trees, I find myself quite excited, and having discovered a few lurking in the trees around Newbattle Abbey and Dalhousie Castle, I was keen to discover more. I’ve decided to call them Goblins, from Tolkien’s Lord of the Rings fantasy series. So, Saturday morning saw me on the No 140 bus for Dalkeith Country Park. Yes, I’m making use of my Saltire card, also known in ye olde terms as a senior citizen bus pass. And yes, I could walk from Bonnyrigg to Dalkeith Country Park but the return trip is around 5 miles and while using the bicycle or kick scooter would be faster neither is practical for tramping around woodland, so the No 140 bus it was.

However, photography wasn’t my only reason for visiting Dalkeith Country Park, I also wanted to do some turfing and keep up my Five-A-Day. The walk from the house to the bus stop offered up four turf zones for starters and I’d collect more as I walked around the park. Alighting the bus at Dalkeith High Street, I also grabbed zone HolyBuccleuch at the church and walked along to the park entrance while carefully resisting the urge to gaze longingly at the BMW motorcycles on display at Motorrad Central. Torture, sheer torture, it was. Wish I’d never sold my BMW R1150R.

I followed an anti-clockwise route around the park, heading round behind the church and along the River South Esk for Restoration Yard, which was teeming with Easter holiday visitors. Zone Restoration, located beside the Orangery was taken next, then I was off along the path leading towards the Old Oak Wood the park is famous for. The area is also a Site of Special Scientific Interest (SSSI). Some trees are said to be over 1000 years old.
The trees along the path offered up a few good examples but the sheer number of living trees as well as fallen trees and branches was almost overwhelming. I simply didn’t know where to turn next. So, I stuck to the path and the trees between the path and the river for now. I could always visit again and search other areas another time.

Now, you would imagine, having seen the vast number of photographs on Planet Gary that my camera equipment would be well prepared, and usually this is indeed the case. However, not so today. I was using my compact camera when the battery warning message flashed up. No worries, I thought, I have two spare batteries, so popped one in. Oh dear, battery warning message again. Bugger, where’s the third spare. Arrgh, it’s at home waiting to be recharged. One dead as a Dodo camera. Thankfully, I had the camera on the mobile phone, which actually does a pretty good photo.

Anyway, onwards. Continuing along the footpath, I had my second annoying event of the morning. I noticed a young spaniel approaching at speed. I just knew it would jump up on me. But, the owner called it and it stopped, waited a while, them turned back. No problem. Then the dog stopped again, ignored the owner calling for it and started running flat out again for me, directly across a very muddy puddle. And yes, it jumped all over my nice clean Rohan trouser. The owner was very apologetic. I love dogs as much as anyone but they should be under control.

Following the river upstream offered up another two turf zones, BridgeOfFaith and ToEdinburgh, as well as quite a number of potential goblin photographs (I would only know for certain when back at the computer when I’ve mirrored the images). Lunch was taken in a nice warm sheltered spot beside the river, then I followed another loop out towards the King’s Gate and back along paths towards Lugton, picking up another three turf zones along the way bringing my days total to a good dozen. Back in Dalkeith, I noticed that the No 140 was due in 3 minutes, so hopped on and was soon back home.

It’s strange, it feels like more of an adventure getting the bus, not something I do very often, but can certainly see more of the same in the future. The 140 also goes to Penicuik and I have some uniques there in the Pentland Hills still to take, so the bus might be a good mode of transport for those, though quite a walk from the town to the hills. Perhaps, taking a kick scooter with me might be a good idea. Or perhaps not, as I don’t know the area very well. Back soon.