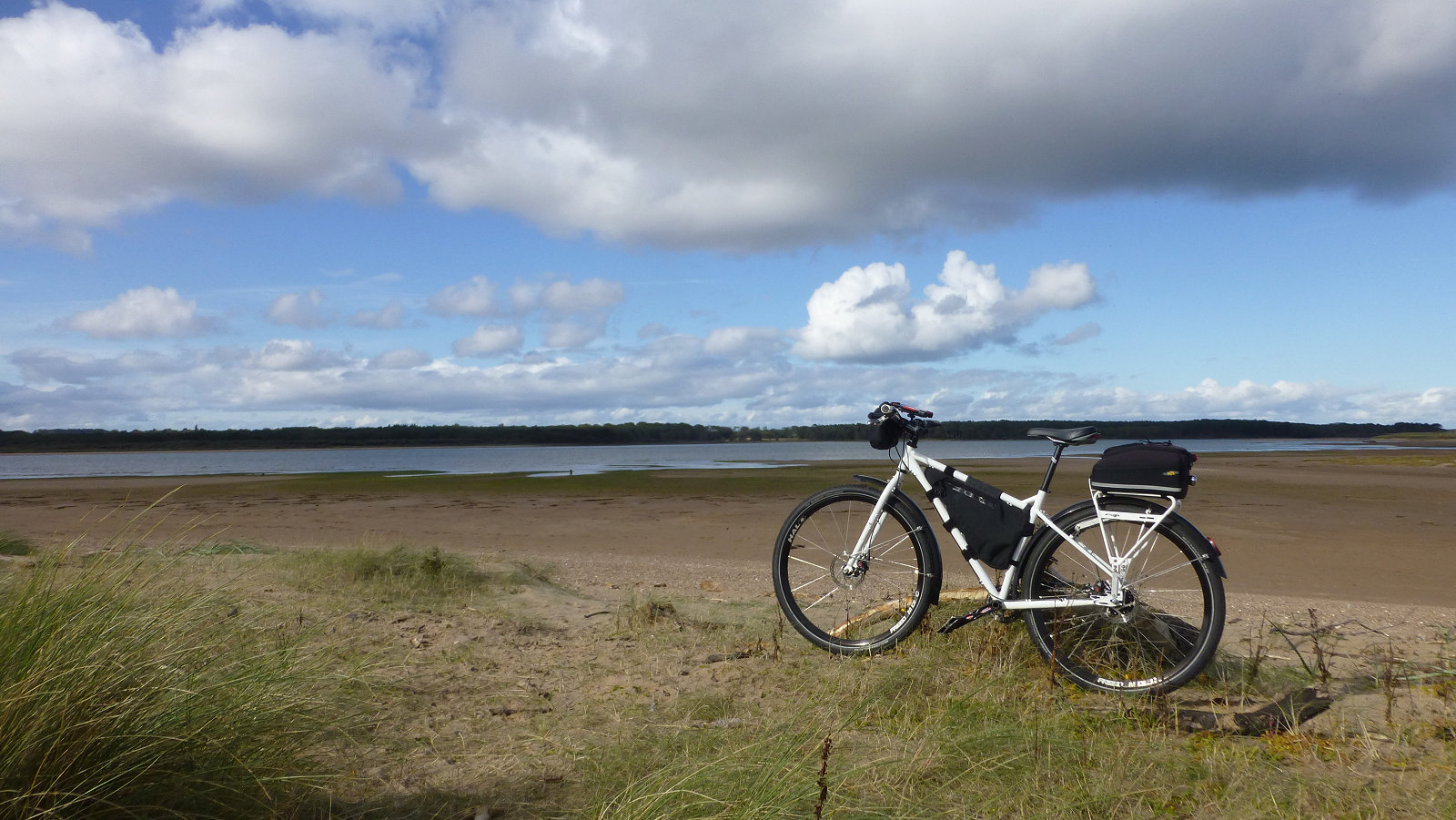 Today, the East Lothian town of Dunbar was the turfing destination for myself and my trusty Surly bicycle, Ogre. Our aim today was uniques, 46 of them to be precise. With my unique count sitting at 932, leaving only another 68 to reach that magical 1000 total for the 1000 Unique medal, I was keen to whittle that 932 down further. I realise that 46 zones will not be enough but simply fancied a day at the coast. It will just leave another 22 uniques to get. 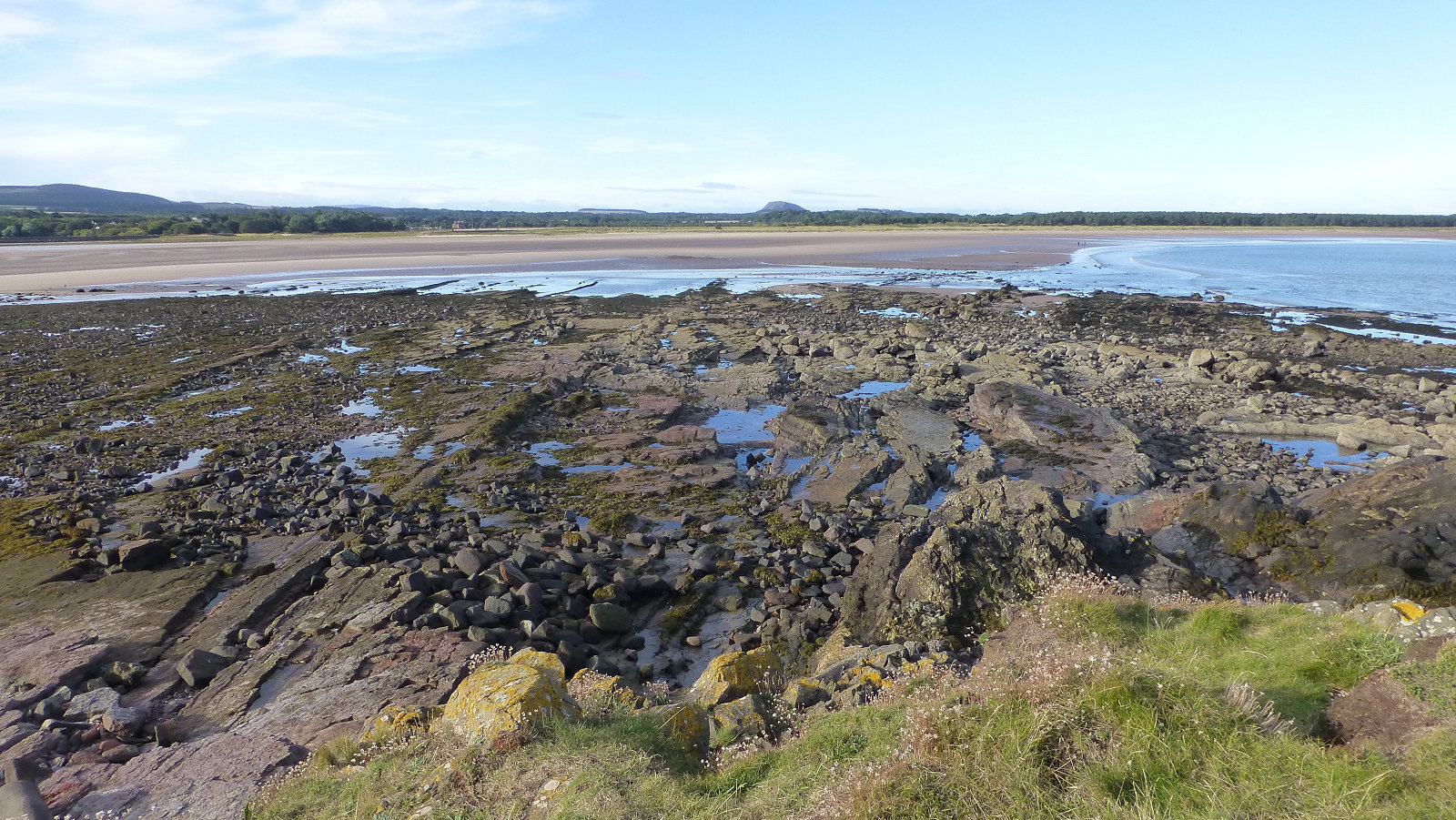 I loaded Ogre onto the tow bar mounted bike rack and although easy enough does take a bit of time, what with removing the frame bag and both pedals (they hit the car bodywork) and all those straps and the like. I wish I had a small van but that isn’t very likely to happen. So, to remedy this problem, I’ve another wee project in mind, a custom shed-built tubular-steel sit-on bike rack. When complete, all I’ll need do is lift the bike on (any bike, including the fat-tired Pugsley), attach two straps and that’s it. It’s still at the design stage and I also need to convince Cathryn to allow me to purchase a MIG welder but fingers crossed. I have tried this before but the ARC welder I had at the time was a real pain to use. I just couldn’t hold the welding rods steady enough.

My starting zone was BielBridge, just off Shore Road and located in Belhaven Bay. It’s also known as the Bridge to Nowhere so-called because at high tide it doesn’t seem to have any purpose. At low tide is allows pedestrian to cross the Biel Burn without getting their feet wet. I wanted to start here because if I returned later the tide would be in, and the bridge inaccessible, except for wading or even swimming. It was also a good place to park as well. I hadn’t really planned any route around the Dunbar zones but decided to start by following the coast eastwards and work my way back through the town. 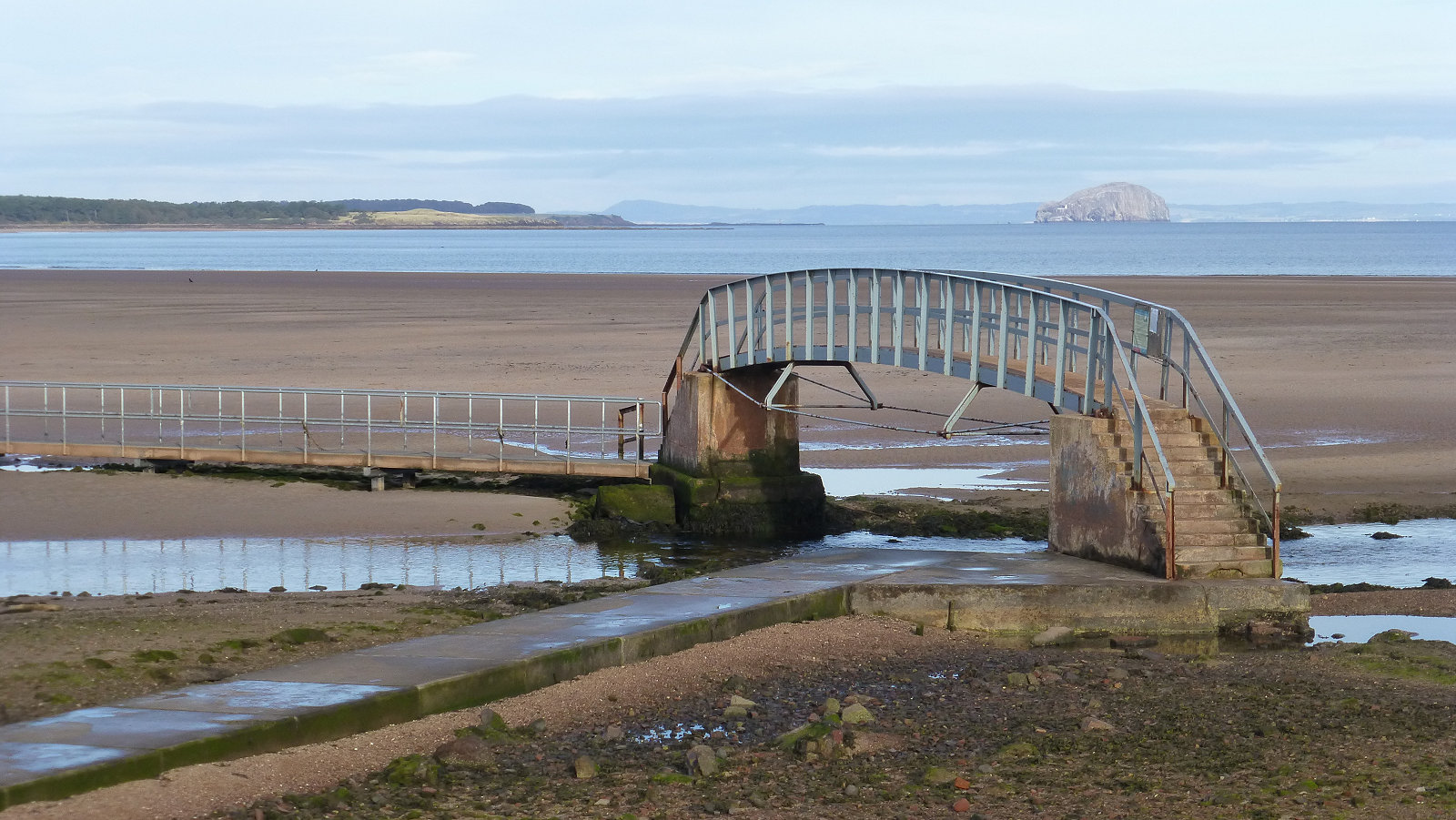 First few zones were on the edge of the golf course, always a dodgy place to ride a bicycle. However, the course was quiet today and I made it safely to the esplanade, a fantastically smooth tarmac path along the cliff-tops, and without dodging wayward golf balls or annoying any golfers. The views out over the Firth of Forth were amazing and the sight and sound of three RAF jets passing by at low-level was quite exciting. The planes had twin tail fins, and might have been Lockheed Martin F-35 Lightning II’s but I’m not an aircraft buff, so could be wrong.

My route then took me and Ogre along to the harbour area with plenty of easy zones to take. Not so easy on a bicycle was zone Bayswell, requiring me to carry Ogre down 63 steps and back up again. This did elicit a comment from a passer-by as to why I didn’t ride the bike up the steps? I replied that I had the wrong bike today. He suggested I could have easily ridden down the steps. Smart arse! 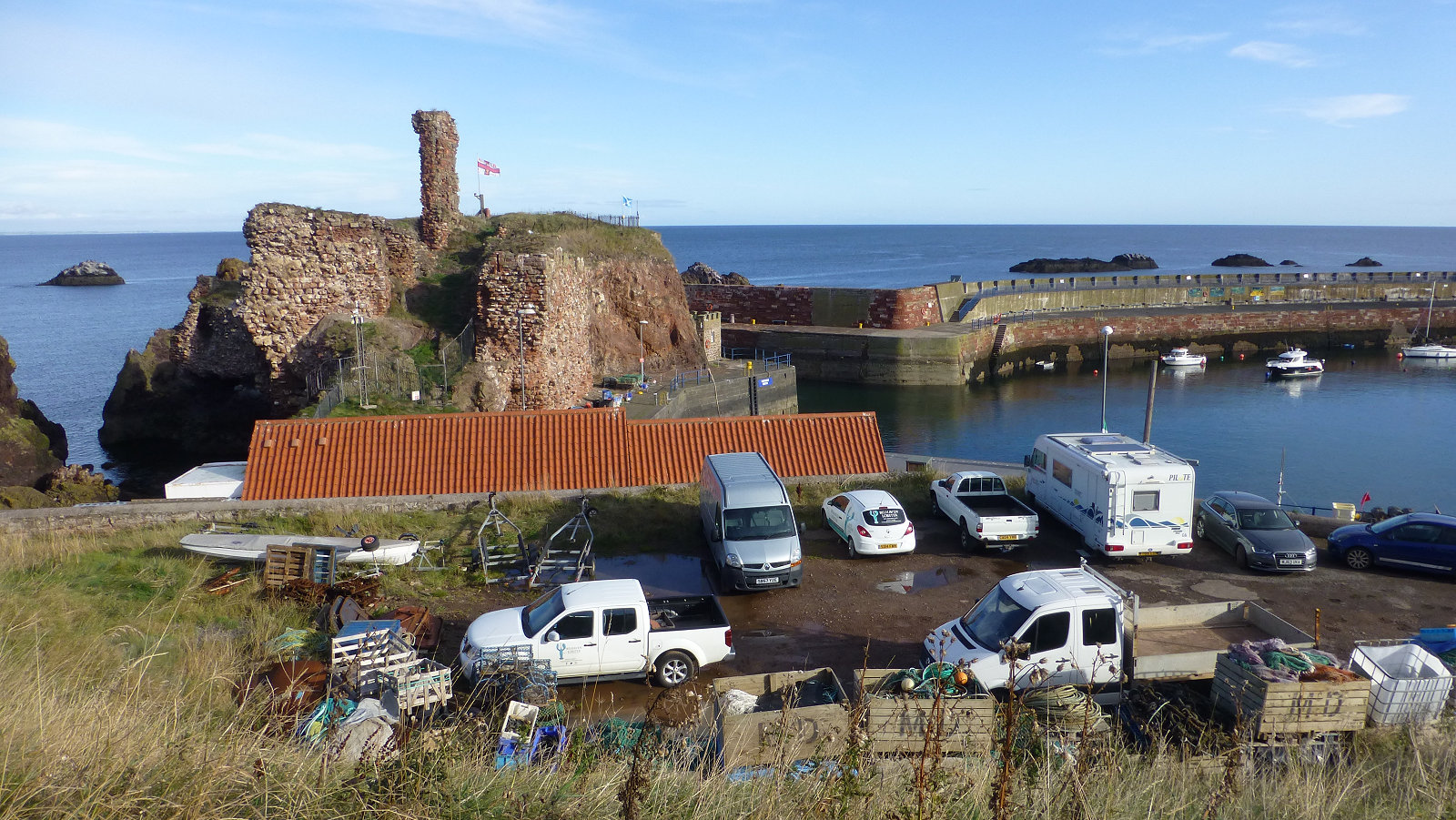 The most easterly zone was DeerPark, where I about-turned and started picking off zones in what I think is the Lochend area, the area between the railway line and the A1 road to the south. Lots of new housing here and I was quite surprised to discover so many woodland paths, not something I had any notion about. I’d earlier tried to access the area from Dunbar railway station, using the passenger lift to ferry myself and Ogre, purely for the novelty, onto the footbridge across the railway line. However, there did not seem to be any access to the station to or from the houses to the south. Seems a bit daft, in my opinion.

One zone I liked was Dunbear, featuring a five-metre-high steel sculpture of a brown bear standing on its hind legs and created by Andy Scott, who was also responsible The Kelpies in Falkirk. The Dunbear was erected in November 2019 and is a tribute to John Muir, the Dunbar-born naturalist and conservationist. Shame it’s next to the very busy, and very noisy, A1 road. It’s good but doesn’t have the same impact as The Kelpies. 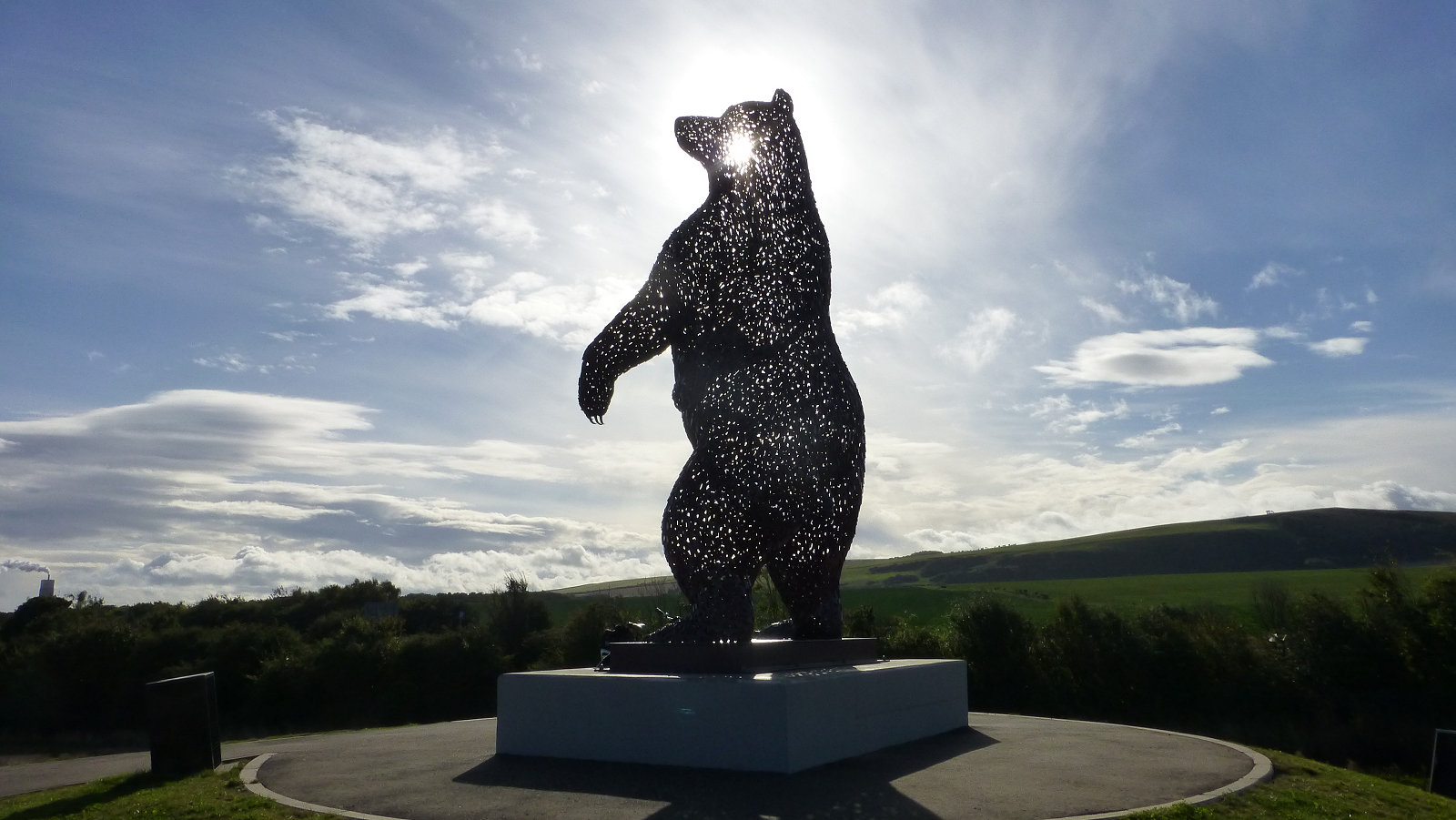 By 11:45 I was at zone Lauderdale, located in a very delightful little park with some interesting mushroom sculptures. It was the ideal spot for lunch. Sheltered from the wind and with lots of benches to choose from, I settled down for some grub in a shady spot. With 34 zones taken, I needed to replenish my energy. Only another 12 to go.

Refreshed, I picked off the final half-dozen zones in Dunbar, then cycled across to the John Muir Country Park for the final four zones of the day. The first zone was at Seafield pond, where an elderly lady was shouting herself hoarse trying to get her dog to return. The dog, a beagle, just ignored her and continued to sniff at whatever it was sniffing at in the rushes beside the pond But eventually, it gave in and sauntered off to get a proper scolding along with threats that the dog’s toys would be locked away. I kid you not. Some people. 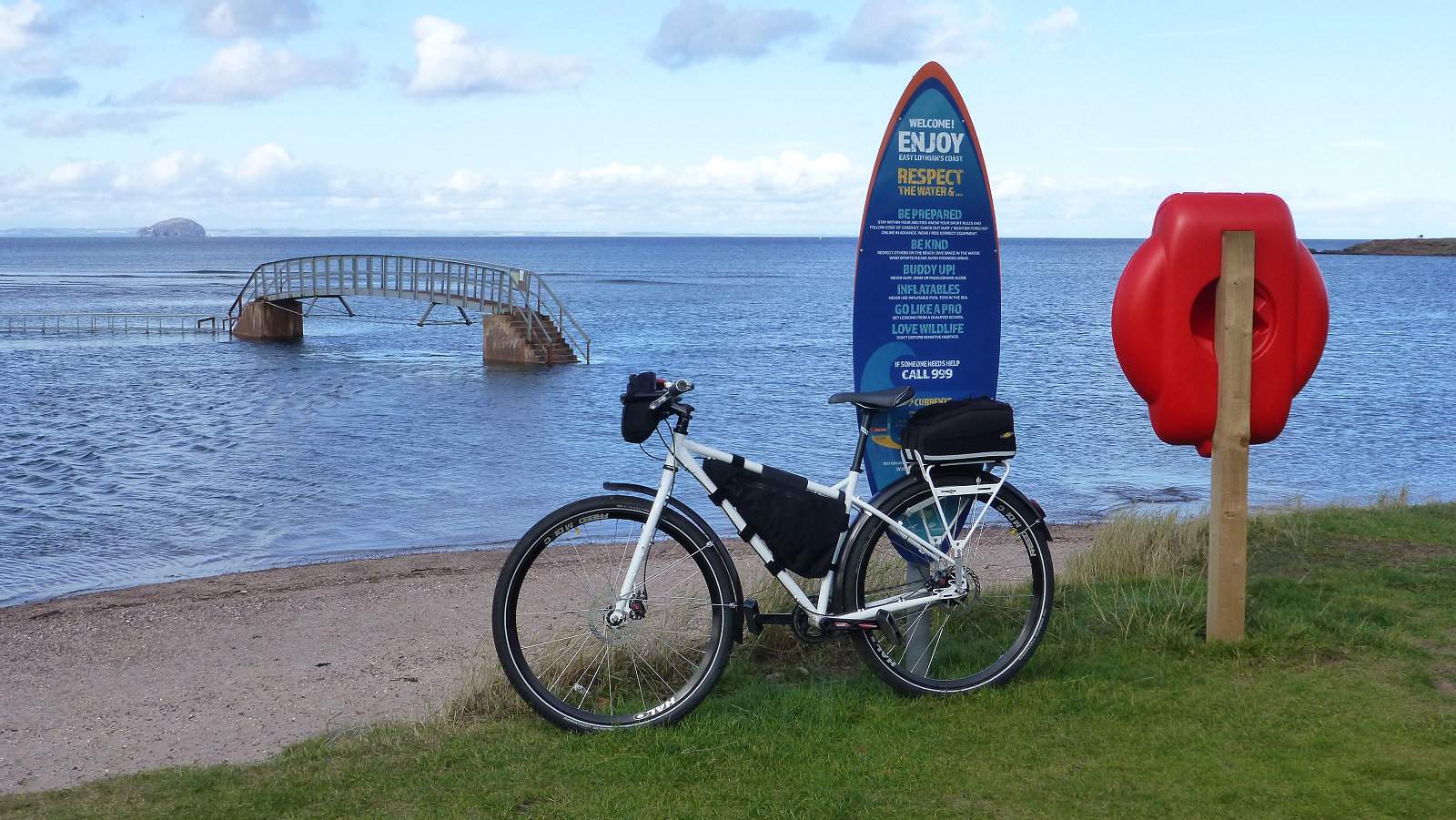 Zone NotBlueBridge was next, taking me across the Biel Burn, followed with zone Linkfield at the John Muir Country Park parking area and finally, zone SeeSpikeIsle out towards Hedderwick sands. I was reluctant at first to take Ogre along sandy trails (I usually use the Surly Pugsley fat bike for this type of terrain but one single zone does not justify a separate trip), but it wasn’t too bad. And that was that, all 46 unique zones in the bag. I then retraced by route back to the car and noticed the tide was in and the Bridge to Nowhere really was a bridge to nowhere. Glad I didn’t leave it until last because I wouldn’t fancy a waist-deep wade to take the zone. Keep on turfing.