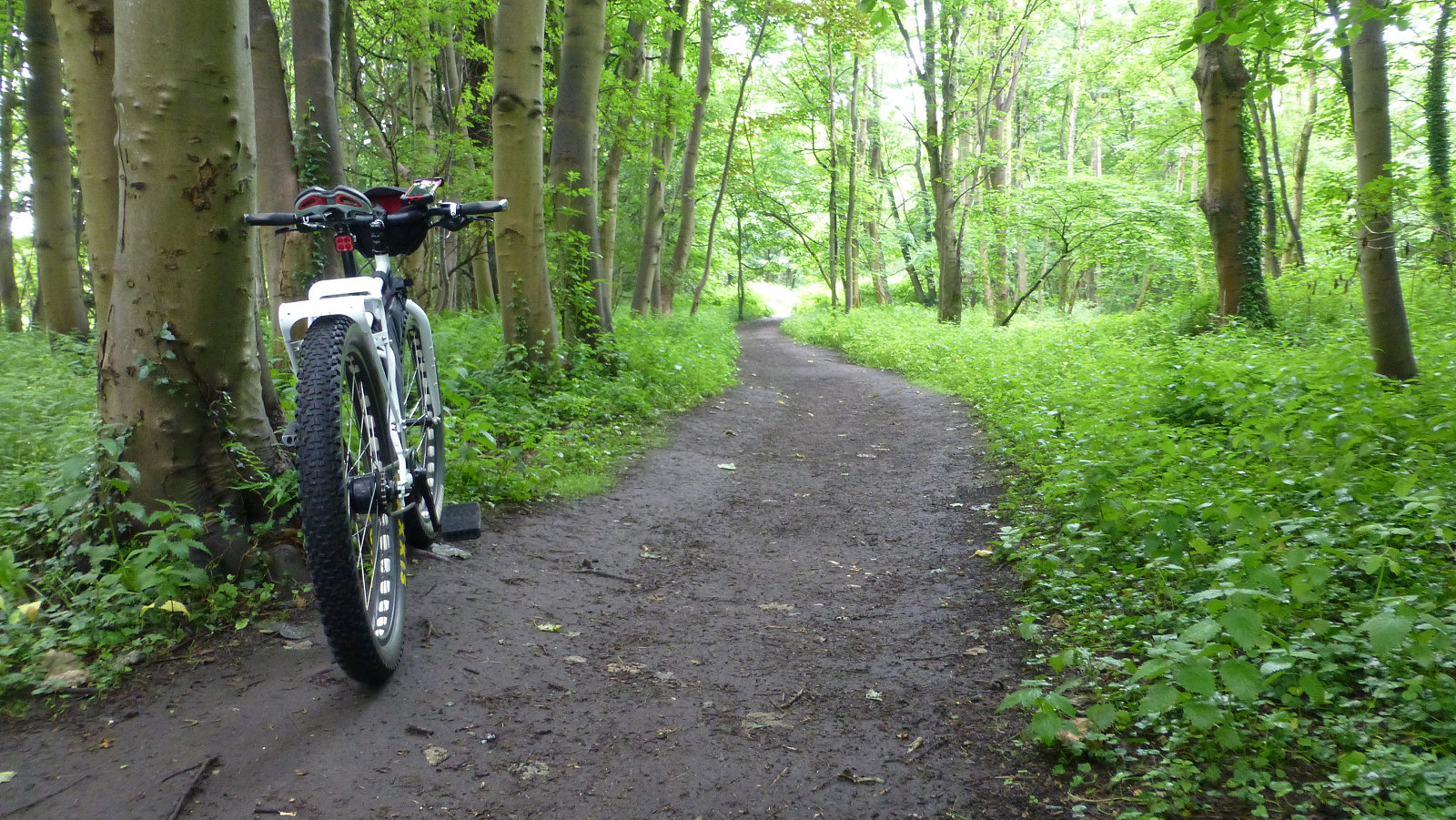 A quiet day today turf-wise with just a short ride on the Surly Krampug around Newbattle woods, adding another 13 round uniques to the total giving me a nice count of 96. Only 404 to go for that magic 500 figure. And still plenty days in which to do it. Most of my bicycle turfing these past months has been with the Surly Ogre but poor old Krampug has been much neglected, so decided to give him a cross-country run this evening. With 29″ x 3″ tyres running quite soft pressures, I wanted to see if the smoother, more comfortable ride, would be better for my back ache. And it was.

What a difference big tyres makes on rough ground. There’s none of that jarring you get with the skinnier tyres on the Surly Ogre, the 3″ wide tyres on the Krampug simply ride over everything, rocks, gravel both big and small, slippery tree roots and even small yapping ankle-biting dogs (only kidding about the dogs!). The downside is it’s slightly harder to pedal with the increased resistance of the big tyres, a compromise, comfort at the expense of speed and effort. But fun all the same.

On my previous blog I mentioned about the difficulty regarding keeping track of all the zones taken during my attempt at the Diversier medal. At first I thought the Turf app would do the job but that proved incorrect. However, a welcome email from a fellow turfer, pointed me towards a site called Frut which has the ability, once logged on with your Turf name, to show round unique zones taken for each area, for example, Midlothian. Now I can keep track of all those 500 zones and, hopefully, avoid any duplication. Many thanks to turfer Wintergreen.

I think I’ve mentioned this before, but it’s really liberating not to have to concern myself about how many zones I keep control off or how many points I have or don’t have. I see alerts popping up on the mobile phone. So many zones lost to so-and-so, another bunch lost to another so-and-so. Normally I’d probably be out there soon after taking them back but, at least for the moment, it doesn’t matter a hoot. With the Diversier medal I just need to take uniques, nothing more, nothing less.

As I floated my way around Newbattle, my thoughts turned to my next medal challenge and what that might be. The most obvious one is the Diversiest medal, taking 1000 round uniques in a single round. My local patch of Midlothian has 377 zones, the adjacent City of Edinburgh has 1022 zones and East Lothian some 536 zones. Add another 402 zones down in the Scottish Borders and that’s 2337 in total. Taking 1000 round unique zones looks a tall order indeed but not impossible. That’s about 30 zones a day. Food for thought.

The most likely medal I’ll be going for is the 1000 unique – awarded for taking 100 unique zones in total. With 752 zones already taken, that leaves only 248 required and with plenty of uniques available to me locally in Midlothian, Edinburgh and East Lothian, should only require some determined effort to add another medal to the collection. The weather forecast tomorrow is for thunderstorms, so possibly no turfing tomorrow but you never know. Back soon.