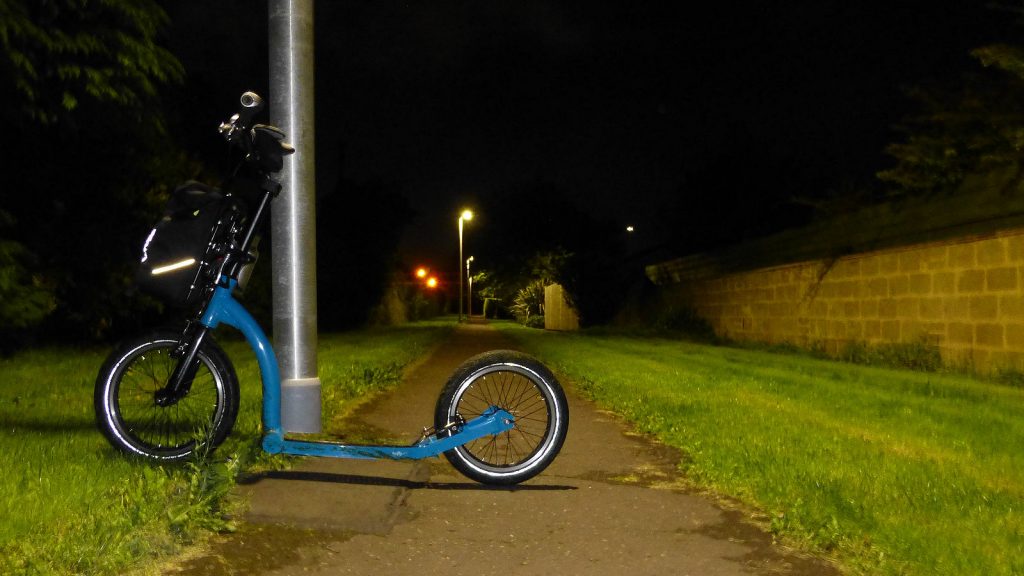 The air temperature last night was 12 degrees Celsius, right in the Goldilocks zone, not too hot and not too cool, perfect for a night turf on the kick scooter. It’s the temperature I like, good for shorts and t-shirt, you neither get too hot from exertion nor too cold from the weather. Actually, I had already written off a night turf yesterday evening as rain was forecast. But I was up for a Jimmy Riddle around 2:20 am and checked the weather, as you do if you are a turfer looking for mini-adventures, and loo-and-behold, it was dry. Freyr, the Norse God of Rain, must have decided to go turfing. Time to head out myself.

There was a bit of a breeze as I wheeled the Swifty Air from the shed and set forth but not enough to cause any wind-chill to bother about. It’s very quiet at this time of the morning, just the faint rumble of distance road traffic, a robin singing nearby and the swish of the Swifty’s tyres on the tarmac. WayOfBaird was zone first to fall, taken from ChoccyMuffin. Thought I’d better not take too many zones from Cathryn, my wife, or I’ll be in trouble when I get back. Next was WaverleyPark, the grass wet with an earlier rain shower. Then a bit of an uphill climb, more noticeable when kick scooting than cycling, stopping off to take zone LothianSquare.

Re-joining the old railway path brought be to zone TongueSpatula, near the health centre. I was actually there yesterday and having cycled up was most dismayed to find the cycle racks had been removed and replaced with a new covered bicycle shelter. All very well but it was padlocked. The mind boggles when an establishment supposed to be promoting health and exercise does away with somewhere to lock up your bicycle. Enquiries revealed the new bike shelter is for staff only. I’m going to take this matter further and phone Nicola Sturgeon, the would-be next Queen of Scotland, and the Prime Minister.

I was now heading for zone IKnowBroom, along Golf Course Road, and spotted the first fox of the morning. As usual, it spotted me long before I noticed it and all I was left with was a vanishing bushy tail. Next zone was BroomieGolf, reached via the naughty route, i.e. across the golf course. There’s an access onto the course from the overflow car park. I always keep to the edge of the fairway and make a point of avoid the greens and bunkers. Seems only fair not to cause any damage. Some magpies and jackdaws roost in the trees and always make a racket when I pass. For zone MelvilleGolf, located beside the club house, I free-wheeled down the grass beside the driving range and along the deserted entrance road.

Now, for my next zone, WishartPlace, it would have been sensible and quicker to head for the roundabout and along Lasswade Road, but where’s the fun in that? No, much more fun to loop around the golf course, join a path in the woods (good for owls calling) that runs under the road bridge and pop out again onto Elginhaugh Gardens, a new housing estate. Quite a few heavy goods vehicles on the A7, all breaking the silence for a moment, before the usual quiet returns. Quite a few rustles in the undergrowth, probably just deer, rabbits, alien big cats or goblins.

EskPath zone was next, and I’d been out an hour by now. Not very efficient turfing with this being only my 9th zone of the morning. But I guess that’s what happens when you hang about listening for wildlife on golf courses. Leaving the old railway path after zone EskPath produced my second fox of the morning. I think we saw each other about the same time. We both stayed still for a few moments but as soon as I moved the fox was away, slipping into the gardens. Now, normally I’d nip through the graveyard for the next zone, HolyDalkeith, but for a change, I scooted along the path towards the river, looping back to the zone at the car park.

The center of Dalkeith at the crossroads was deserted, no pedestrians, no vehicles, nothing moving at all. It was quite eerie. Other than the traffic lights changing as I approached, nothing else other than a solitary coke can rolling along the road. Very strange as there wasn’t any wind at the moment. I barely had to look before crossing the road but I always do anyway. You never know if there’s a silent cyclist you’ve not noticed. Better safe than sorry.

WhichKing was next, an easy take in King’s Park, then a fast scoot down to Abbey Road and onto Newbattle golf course. Again, there was a smoother and faster route along the tarmac path but much more interesting to skirt around the golf course and down to the river. Of course, kick scooting on grass is much harder than smooth tarmac but all good exercise. Crossing the Maiden Bridge gave me zone SouthEsk and a quick scoot across Waterfall Park offered up zone Peppermint. Then it was back to the tarmac path mentioned earlier. Zone BattleForest was a no-go, as the GPS was playing up and I didn’t fancy stumbling about the scary woods in the dark trying to avoid goblins and McTurds, so scooted onwards for zones Beatles and BikeSlooowly.

Zone BikeSlooowly is located at the police station and a police van drew up beside me and asked how I was. We chatted for a while, mostly about the kick scooter and turf. There was three of them in the van, all three smiling that smile that hints at concealed amusement. Cannot say I blame them mind you. He I was, a male over 60, wearing bright multi-coloured shorts and a yellow t-shirt, riding a giant kick scooter in the middle of the night. No wonder they stopped. Probably thought I was daft. They did ask, however, if my scooter was electric, which thankfully it isn’t, or it might have been seized. I forgot to hand out some Planet Gary cards, which was annoying.

CollegeZone was next and yet another fox, a young one this time, taking to its heels as soon as I appeared. Zone Eskbank was grabbed at the deserted railway station, then A7View was taken on the bridge over the A7. The final zone of the morning as Wishart, where I nearly came a cropper trying to avoid suicidal rabbits. They would run one way, change their mind, then run the other way, usually into the path I was heading. No wonder they get taken by foxes.

Overall a very pleasant morning on the kick scooter, a nice chat with some bored police officers, three foxes being foxy, a gazillion rabbits, three rounds of golf on three different courses (kidding!) and I must remember to sort the rear brake on the Swifty which is squealing like a banshee when applied. Noisy enough to wake the dead. Back again soon.