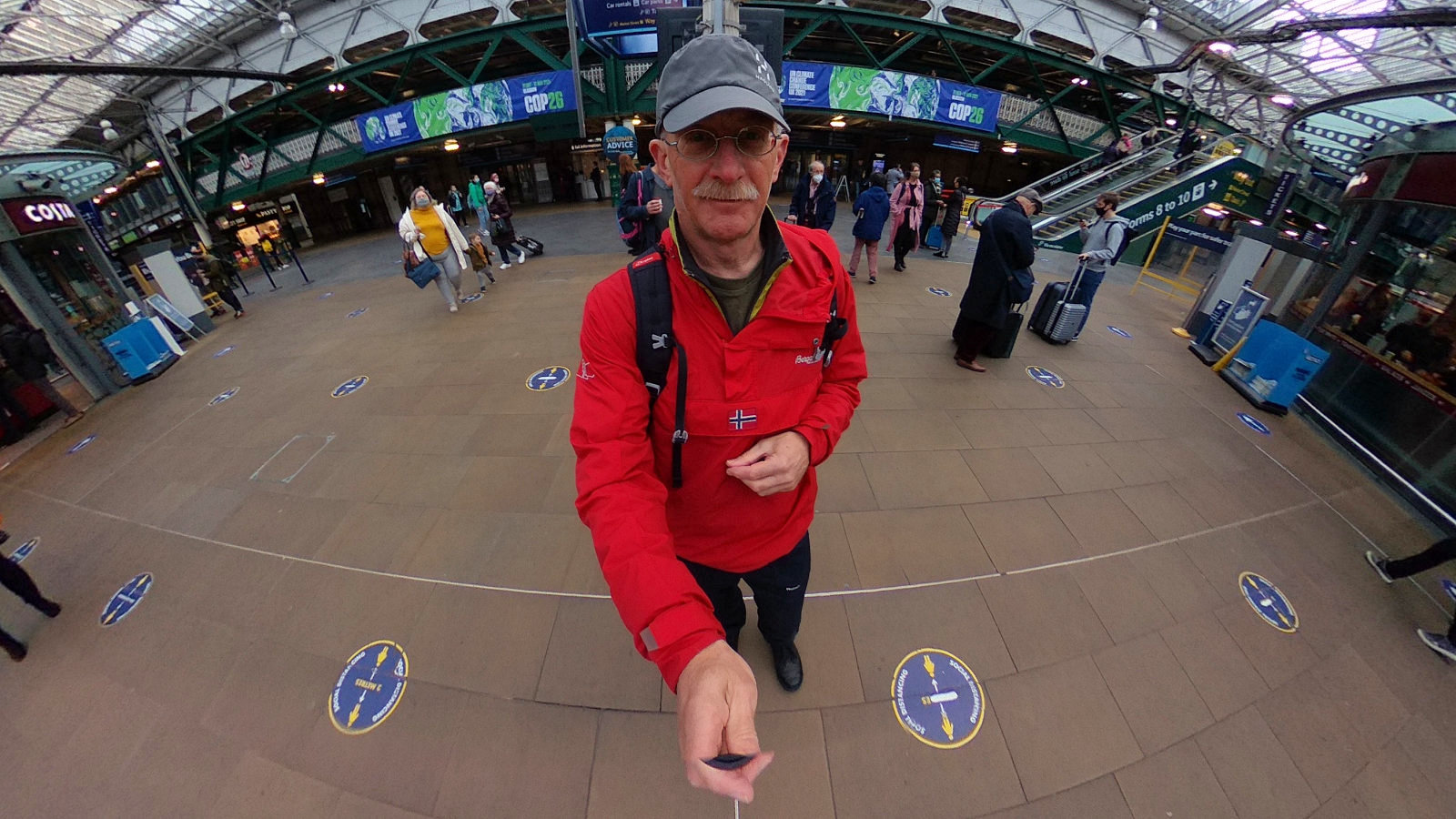 What do the following have in common? Desperate Dan, Dennis the Menace, Gnasher, Oor Wullie and The Broons. Yes, they are all DC Thomson Comics characters and hail from Dundee. And that’s where this blog starts, the city of Dundee, on the banks of the River Tay, in Bonnie Scotland. But this wasn’t a turfing trip, it was a birthday city-break for both myself and my darling wife Cathryn to celebrate our 60th birthdays, on the 12th and 14th November respectively. Though a few zones, quite by chance, did manage to sneak in here and there.

While I would have liked to spend more time taking zones, that would not have been fair on Cathryn. As long as I could keep up my Five-A-Day I’d be more than happy. We set off on the Friday morning and I’d already been out early to take five zones in Bonnyrigg. This meant I’d no need to bother about taking any zones in Dundee on the first day. Which was actually quite a nice change. We visited the V&A Museum, the Discovery Centre and made an unsuccessful attempt in the evening to walk to the Mills Observatory on Balgray Hill, but found ourselves in pitch dark woodland without torches. Not very clever planning.

We were staying at the Best Western Invercarse Hotel in the west of the city, and on the second day of the trip I was up and about turfing at 4.15 am to get my Five-A-Day. The streets were dead quiet, only the occasional taxi broke the near perfect silence. The nearby Ninewell Hospital offered up the required five zones. Near one zone I thought there was two people standing on the cycle path. It seemed odd for them just to be standing there and I was carefully considering options should anything untoward occur. This entailed basically hitting the would-be miscreant hard and fast in places where the Queensberry rules did not allow, then running like the clappers. However, when I approached closer I realised it was only Mr Street Bollard and Mr Telecoms Cabinet. Yes, well, it was dark.

With my Five-A-Day in hand, we first took a stroll round Riverside Nature Park while we waited for the University of Dundee Botanic Gardens to open at 10.00 am. The gardens were quite amazing and we had the place to ourselves. Cathryn looked at the trees and plants and I did some birdwatching, a highlight being a jay hopping about on the grass. Normally they are quite shy and prefer cover but this one was out in the open. Also picked up a zone, DundeeBotanic, before heading to the cafe in search of the Scone of Scones and a coffee. The scone was fair-to-good but not the Scone of Scones. Guess I’ll have to try elsewhere. It’s tough having to eat all these scones in search of the fabled Scone of Scones.

We spent the afternoon walking in the Sidlaw Hills, taking in Craigowl and Auchterhouse hills. Both summits were zone-free which was a shame as the views were amazing. We could even make out the Pentland hills way to the south. On the way back to the hotel we stopped off at Dundee Law which just happens, by pure chance and coincidence, to have a zone, LawHillView.

Sunday, our third and final day, saw us a Glamis Castle – ancestral seat to the Earls of Strathmore and Kinghorne since 1372, and childhood home of HM Queen Elizabeth the Queen Mother – taking a tour of the castle and grounds. Personally, I don’t find castles and stately homes all that interesting but Cathryn enjoyed the visit, so that’s all that matters. Of course, I was totally unaware of a zone, GlamisCastle, immediately outside the castle on the entrance road. It was sheer luck that I had to stop to remove a stone from my boot when we were actually inside the zone and inadvertently took the zone. Must have left the app running by mistake. I was again forced to consume a scone in my ongoing quest to locate the Scone of Scones. The scone was slightly above average. The quest continues.

Monday, back home again and turfing returns to normal with a free trip into Edinburgh, courtesy of my new bus pass. My plan was to grab a few zones in the city centre and also take some 360° zone photographs with the Ricoh Theta V. I’d resurrected an old idea to create a gallery of 360° zone photographs, however I just wasn’t happy with the results so have shelved the idea for now. First stop was John Lewis for a coffee and yes, a fruit scone. It was not the Scone of Scones, but not far away. Some people say the Scone of Scones is a myth but I will not be deterred in my quest, no matter how many scones I must consume.

It was quite relaxing wandering around Edinburgh taking zones. Did notice that the GPS seemed to jump about a bit at some zones but nothing that prevented any takes. Managed to take some 27 zones and had lost all but four by the evening to other turfers. I can now understand why some turfers head out at night. Zone TheGoldenTurd at the St James Quarter had me laughing and it will take some getting used to zones being taken by other turfer so soon after I’d taken them. Zone HillGate and EdinburghCastle took some effort. mainly actually getting into the castle. I’m lucky being a member of Historic Scotland, so was spared the £15.00 entrance fee but it still took some time registering for a ticket online. However, good to get them off the uniques list.

While I enjoyed walking around the town it is slower than cycling or kick scooting. Still have another three weeks before the folding Swifty One arrives, so looking forward to that. Oh, managed to take a zone from the bus this morning, zone Liberdon. The bus had stopped at the traffic lights when I logged on to see who was out and about turfing. A first and probably the easiest take I’ve had to date. Back soon.